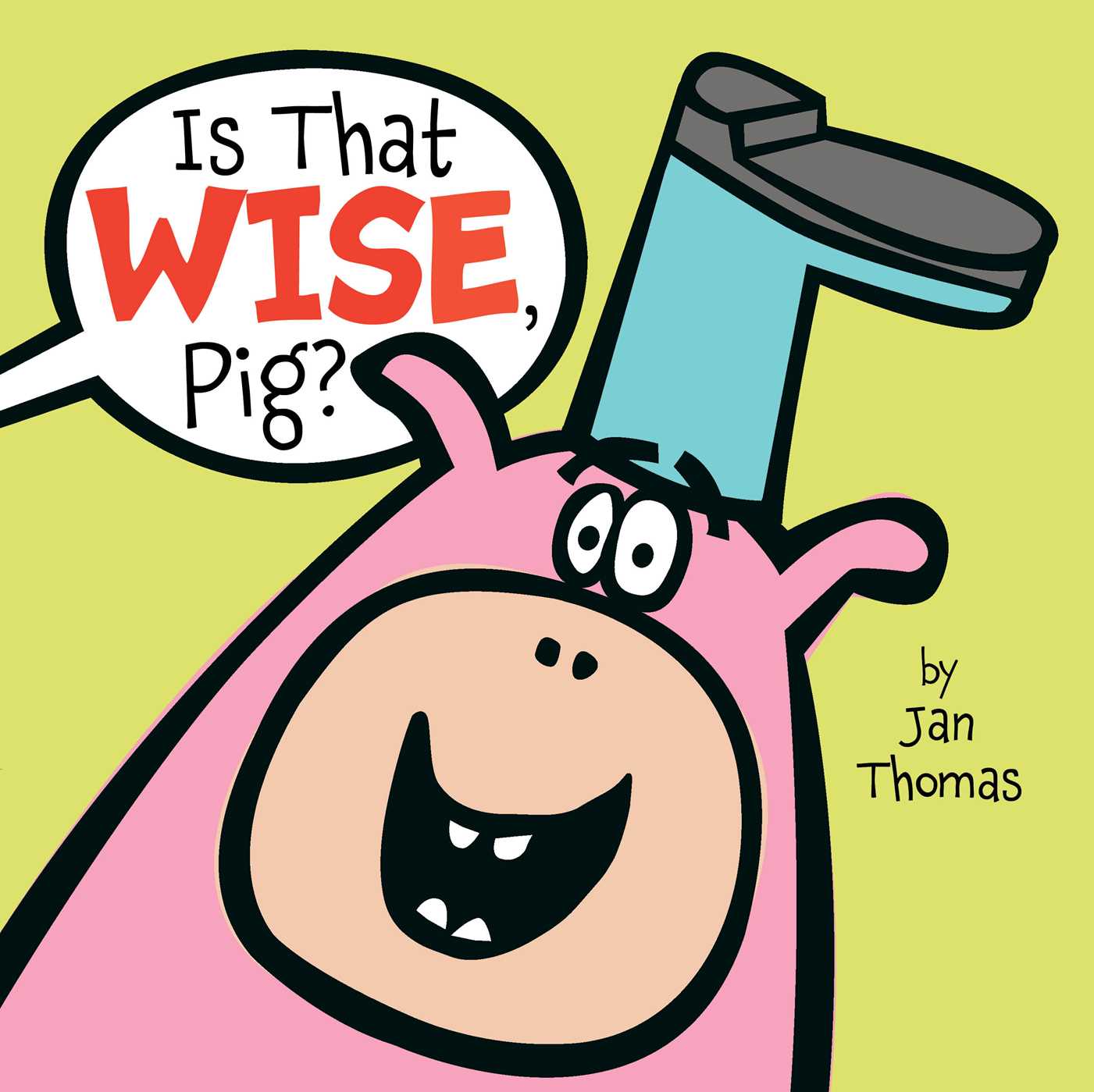 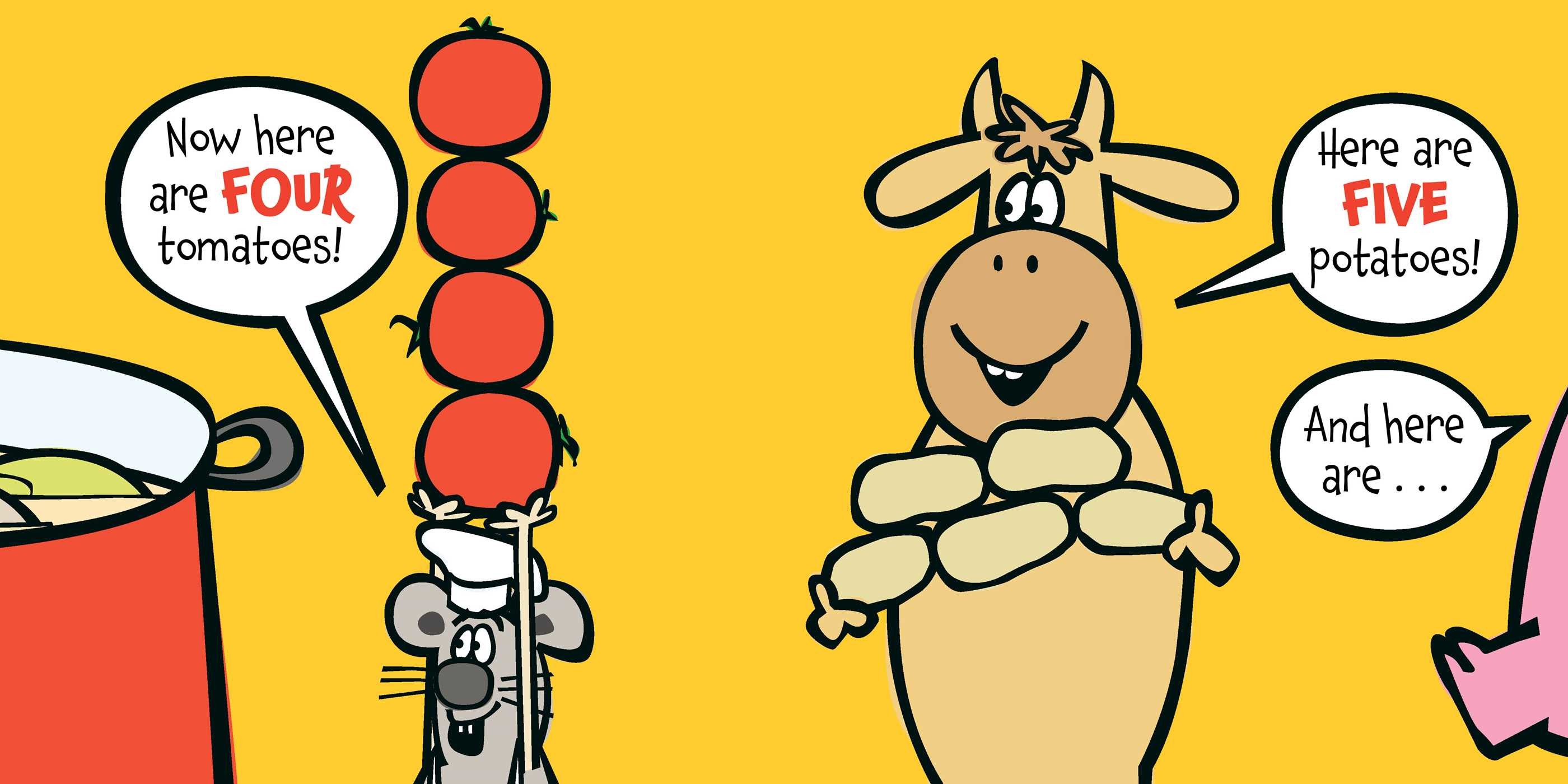 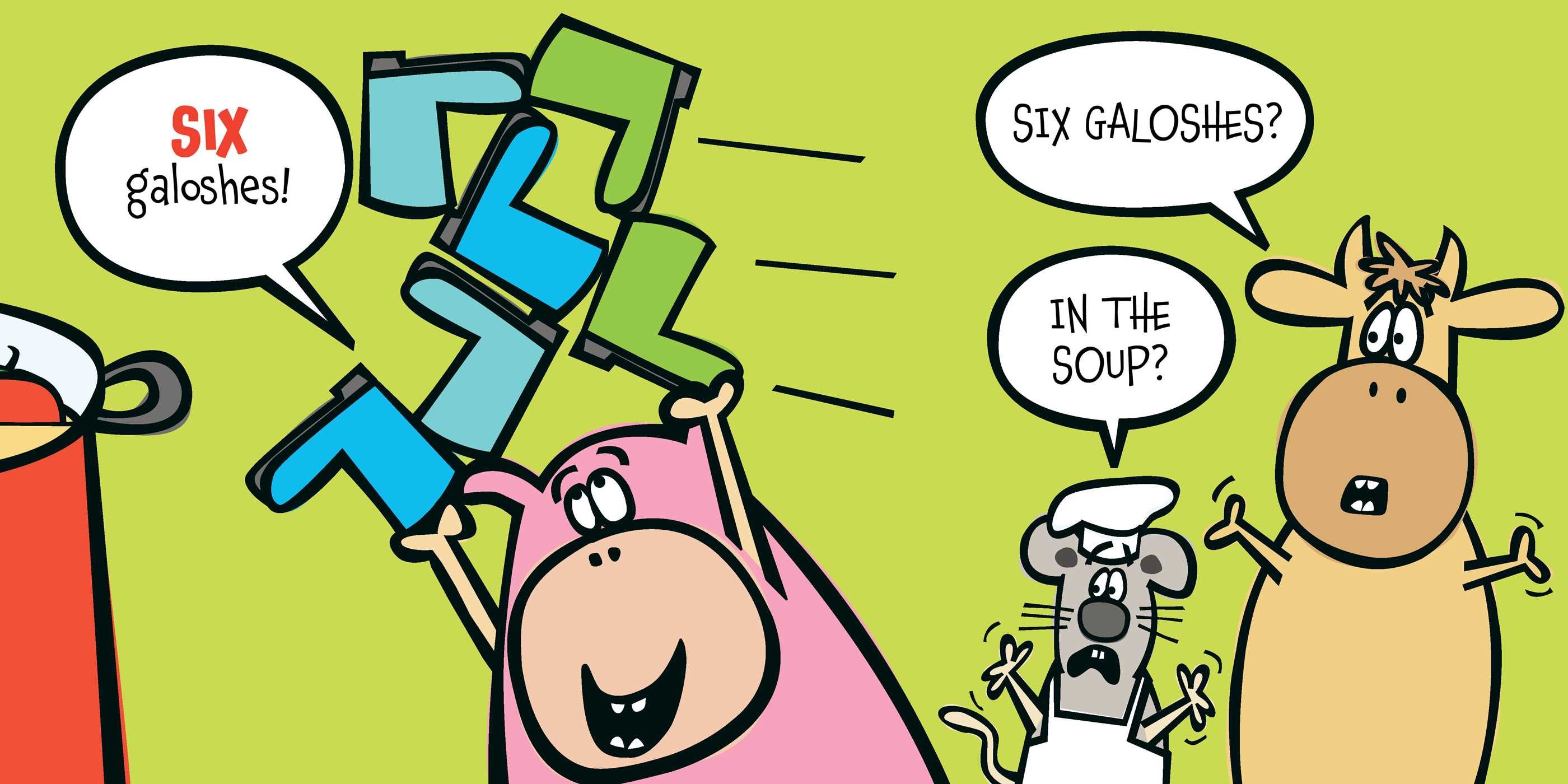 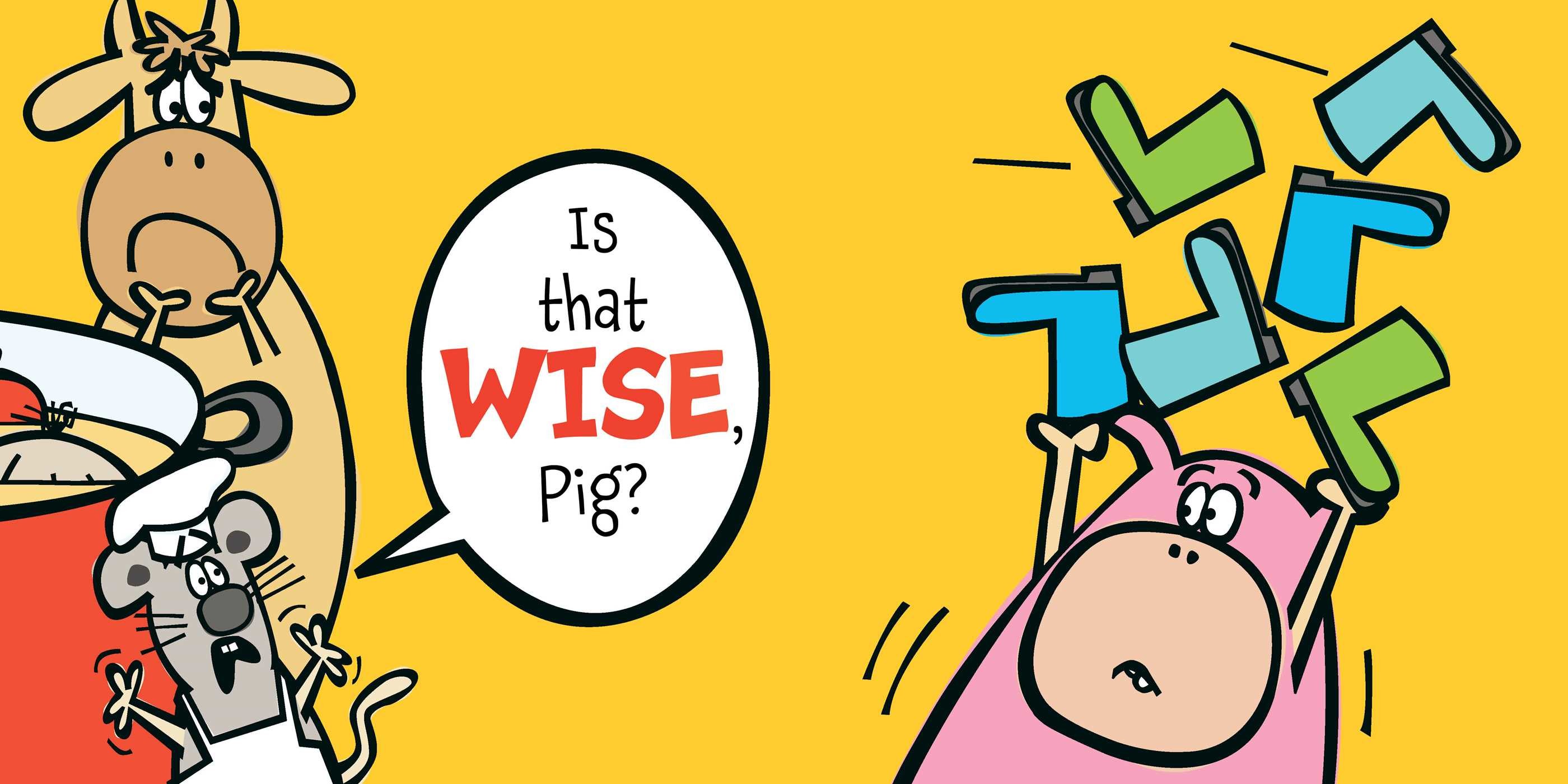 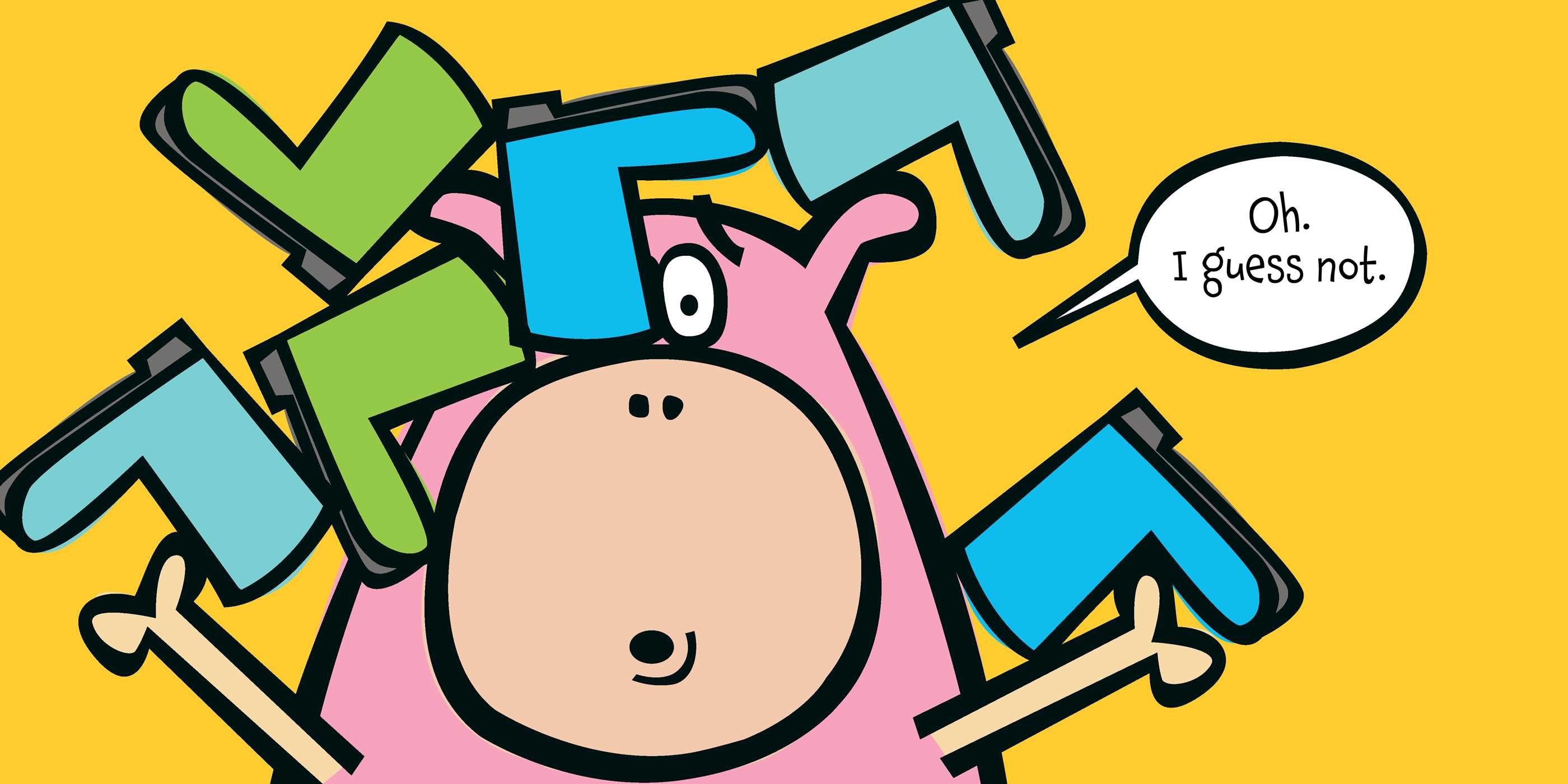 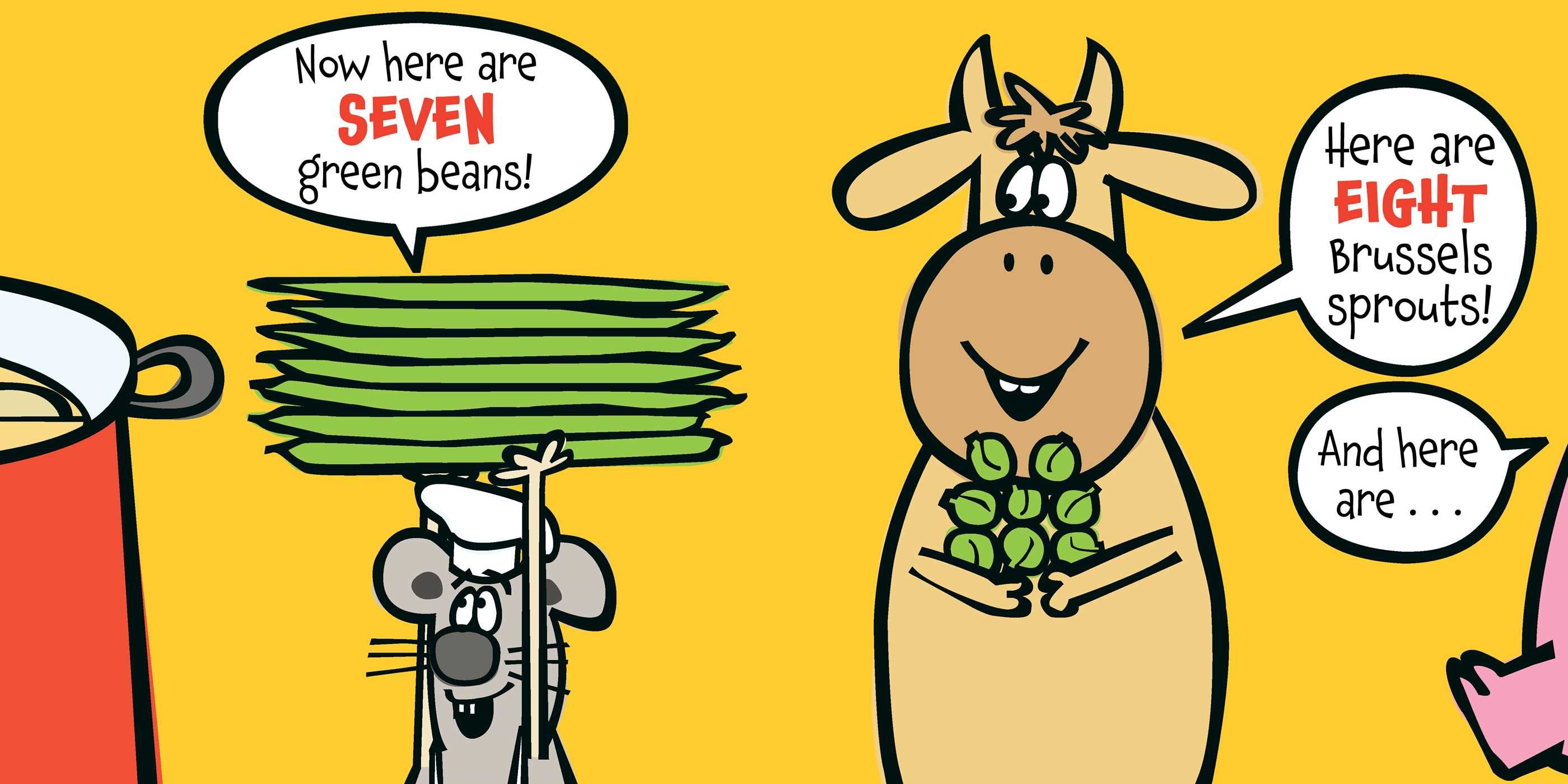 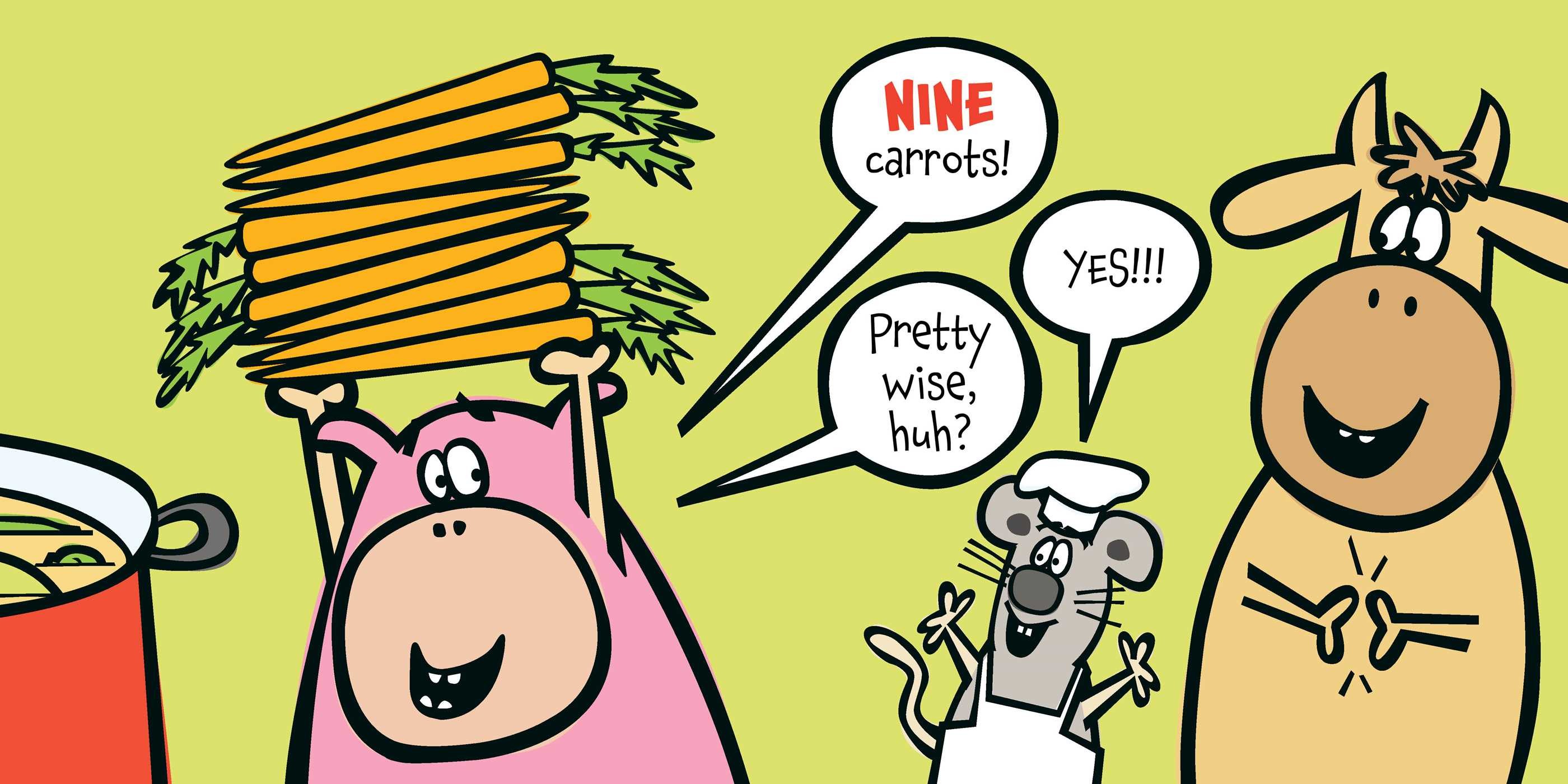 Mouse is making a yummy pot of soup and Cow and Pig are helping add ingredients. Mouse adds four tomatoes, Cow adds five potatoes, and Pig adds…six galoshes?! Is that wise, Pig? Young readers will be so busy giggling at Pig’s antics, they won’t even realize they are counting, too. A twist ending and irresistible characters will make this a favorite read-aloud. 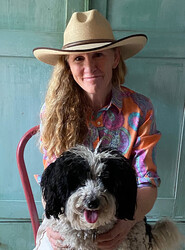 Jan Thomas is the creator of Rhyming Dust Bunnies; Can You Make a Scary Face?; Here Comes the Big, Mean Dust Bunny!;  Is Everyone Ready for Fun?; and Let’s Sing a Lullaby with the Brave Cowboy. She lives with her family in Socorro, New Mexico.

Jan Thomas is the creator of Rhyming Dust Bunnies; Can You Make a Scary Face?; Here Comes the Big, Mean Dust Bunny!;  Is Everyone Ready for Fun?; and Let’s Sing a Lullaby with the Brave Cowboy. She lives with her family in Socorro, New Mexico.

Eight years after Duck's persistent and unwelcome turnip obsession in A Birthday for Cow (2008), it's now Pig's turn to be the odd animal out. Mouse, Cow, and Pig are making a supersized pot of soup. An exuberant counting exercise ensues as a growing assortment of vegetables gets tossed in—one onion, two cabbages—and three umbrellas! The bewildered but ever polite Mouse and Cow ask, "Is that wise, Pig?" Other veggies join the bubbling broth, but Pig's contribution is six galoshes. The running refrain of "Is that wise, Pig?" reaches a crescendo when Pig blithely announces that 10 of his hungriest friends have been invited. With spoons in hand, the plethora of pool-hogging piggies party hearty in the soup-filled pot as Mouse and Cow come to appreciate the fortuitously available umbrellas and galoshes. Bowing to the inevitability of a menu change, Mouse orders pizza instead. Thomas' trademark loud and zany illustrations obey no boundaries and bleed off the pages with raucous abandon. Deft digital tweaking shifts the friends' expressions from anticipatory to chagrined amid the escalating chaos. Preschool sous-chefs, kindergarten accountants, and everyone in between will find commonality in their chuckling reactions to this over-the-top tutorial for impromptu caterers.(Picture book. 3-6)

Mouse is cooking up some soup, and Cow and Pig are eager to help. But while Cow grasps the concept of “soup ingredient,” Pig does not. “Here is one onion!” Mouse says. “Here are two cabbages!” Cow says. “And here are... three umbrellas!” Pig says. Cow and Mouse respond to Pig’s unconventional contributions with the declaration of book’s title—a relatively even-tempered approach that nods to nonconfrontational, teachable-moment parenting techniques. Even when it’s Pig’s turn to toss six of something into the pot, and he offers an armful of galoshes, his friends refuse to throw in the towel (figuratively speaking, of course). Not only does Pig finally get the hang of it but he also proves that bringing galoshes and umbrellas to a soup-making session might not be such a bad idea—if one has invited 10 messy pigs. Thomas (Let’s Sing a Lullaby with the Brave Cowboy) keeps the detail in her candy-colored cartoons to a bare minimum: with characters this expressive and comic rhythms this sharp, why gild the lily? Bonus: “Is that wise, Pig?” makes an excellent family catchphrase. Up to age 8.

Children will be delighted with this silly variation of the traditional “Stone Soup” story. Several animals add ingredients to make a big pot of soup, but Pig brings some seemingly strange items, such as umbrellas and galoshes. When Pig brings his offerings, the other animals ask, “Is that wise, Pig?” Young readers will all know that his silly donations are not wise at all and will laugh at his poor choices. But in the end, Pig’s choices are wise indeed. This book is depicted in the author’s familiar style: large, cartoonlike illustrations with heavy black outlines cover the pages, and the text is provided via speech bubbles. The ingredients are also presented as a counting lesson: “one onion, two cabbages,” and so on. Young readers will be easily engaged by the ridiculous pig and appealing illustrations and will be drawn into the subtle counting exercise. VERDICT This read-aloud begs for extended activities, such as having children make (draw, paint, or cut) their own contributions to a communal pot of soup for the group. Recommended for all collections.