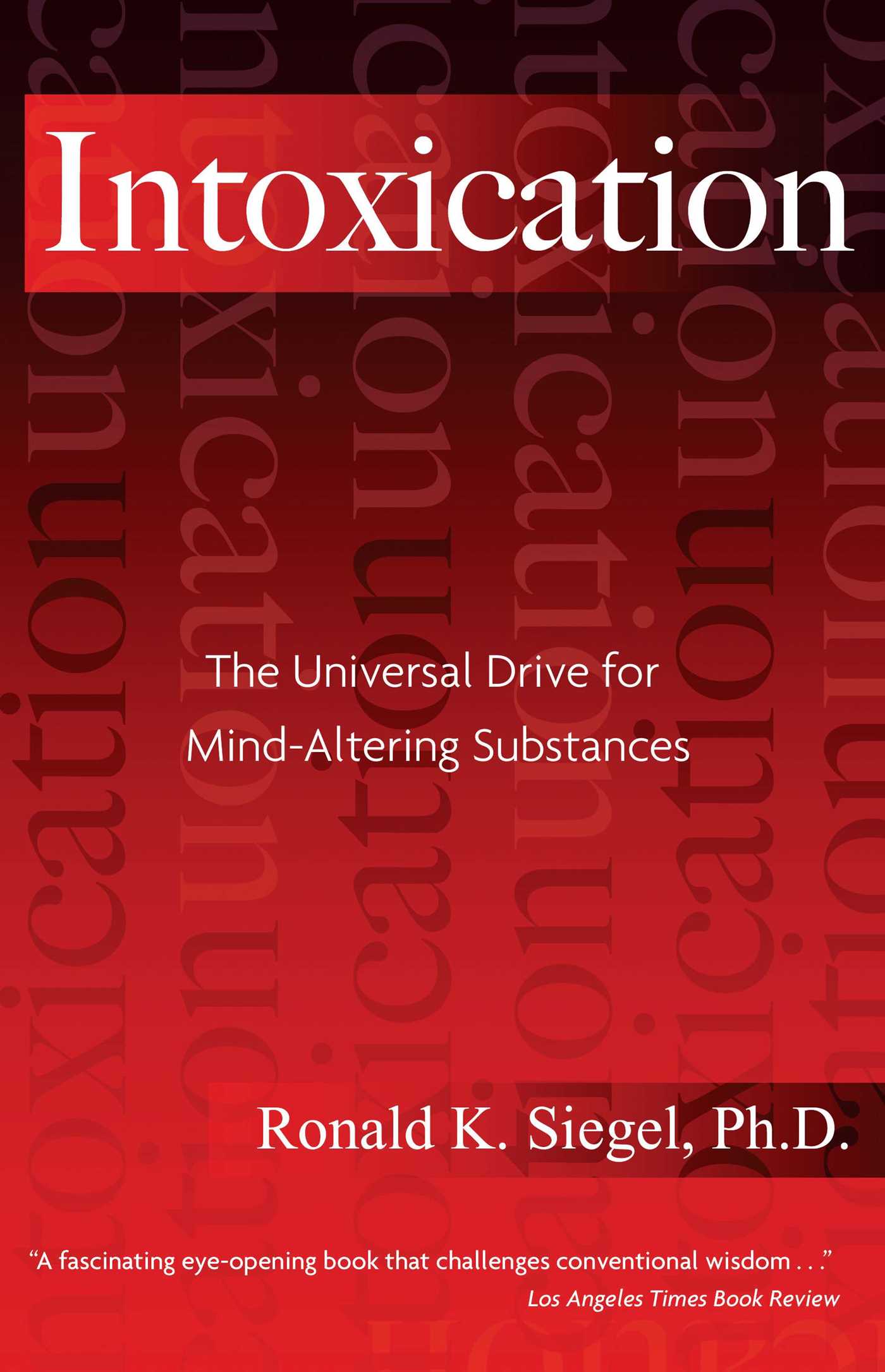 History shows that people have always used intoxicants. In every age, in every part of the world, people have pursued intoxication with plants, alcohol, and other mind-altering substances. In fact, this behavior has so much force and persistence that it functions much like our drives for food, sleep, and sex. This "fourth drive," says psychopharmacologist Ronald K. Siegel, is a natural part of our biology, creating the irrepressible demand for intoxicating substances.

In Intoxication Siegel draws upon his 20 years of groundbreaking research to provide countless examples of the intoxication urge in humans, animals, and even insects. The detailed observations of his so-called psychonauts--study participants trained to explicitly describe their drug experiences--as well as numerous studies with animals have helped him to identify the behavior patterns induced by different intoxicants. Presenting his conclusions on the biological as well as cultural reasons for the pursuit of intoxication and showing that personality and guidance often define the outcome of a drug experience, Siegel offers a broad understanding of the intoxication phenomenon as well as recommendations for curbing the negative aspects of drug use in Western culture by designing safe intoxicants.

Motivation for Intoxication
The dynamics of the fourth drive are best illustrated by the history of cocaine. In the second half of the nineteenth century a widely held belief in Western medicine was that most physical and mental diseases were caused by brain exhaustion and the best way to cure these conditions was to wake up the brain with a stimulating coca tonic. Physicians, pharmacists, and chemists recommended daily doses of coca extracts or wines that delivered the same amount of cocaine as obtained from chewing coca leaves. While intensified dosage patterns were normally prescribed, abuse was held in check by the highly diluted preparations.

Other patterns of use were encouraged by the commercial marketing of coca products. Coca was promoted as a wonder drug not only for medicine but also for social and recreational purposes. To make it more attractive, an assortment of coca preparations were sold, including tonics, gum, cigarettes, and soft drinks. Coca-Cola, originally promoted as a brain tonic for the elderly, was made with a coca extract. It reportedly contained slightly less than 60 milligrams of cocaine per eight-ounce serving, the amount found in a modern intranasal dose.

By the end of the nineteenth century, the tonics were much more potent; cocaine had been recently isolated from the leaf, and the manufacturers substituted it for the coca extracts. Whereas coca products were treated as roughly equivalent to the chewing of the leaves, cocaine was advertised as two hundred times stronger. And it was. Just as the chimps on North and South Island had discovered, coca was not cocaine, and the golden age of coca medicine was in for some lackluster years.

Physicians started increasing the daily dosages to as much as 1,200 milligrams, a lethal dose for most people if taken into the body all at once. The increased doses of cocaine were further complicated by the popularity of the highly efficient intranasal and injection routes of administration. By the time Annie Meyers bought her first bottle of Birney’s Catarrh Remedy in 1894 to treat a bad cold, many snuffs were pure cocaine and patients were instructed to take them as needed. Mrs. Meyers’s perceived needs went beyond the bounds of treating her cold and her pattern of use became compulsive.

When Annie Meyers was arrested for the last time, while trying to blow open a safe, she looked awful and she knew it: “My hair was mostly out. A part of my upper jawbone had rotted away. My teeth were entirely gone. My face and my entire body were a mass of putrefying cocaine ulcers. I weighed only about eighty pounds and it would be hard to conceive of a more repulsive sight.” Not hard at all. One need only examine more recent cases where users, faced with plentiful supplies of cheap cocaine, danced faster and harder than Mrs. Meyers ever could with her Birney’s.

Arrest finally stopped Annie Meyers from doing her Cocaine Dance. Her treatment consisted of a long stay in a sanitarium coupled with the religious and moral lectures that were popular in her day. Traditionally, society still tries to hold the drive in check through legal and moral controls that employ penalties for use, treatment for users, and preventive education for nonusers. Although these methods haven’t worked, our response in the face of such unstoppable examples of the drive as the modern cocaine abuser has been to intensify the controls. Accordingly, punishments escalate, testing programs for the involuntary detection of users become more widespread, treatment becomes mandatory, and educational campaigns tend to deliver more hyperbole than honest information, as in the recurrent message that “drugs will destroy your brain.”

Recently, there have been attempts to quiet the underlying drive itself. Psychiatrists try to block it with isolation, physical and chemical restraints, even electric shock. When all else fails, neurosurgeons in South America have severed the neural pathways in the brains of young cocaine users who refuse to stop. It is as if the healing profession is stepping in to fulfill the promise that drugs will destroy your brain. In Annie Meyers’s time the healing arts also panicked. Dr. Albrecht Erlenmeyer, a famous nineteenth-century drug expert, saw so many unstoppable addicts like Mrs. Meyers that he proclaimed cocaine to be “the third scourge of mankind,” after opium and alcohol. It was really only the fourth drive, a drive our species had always danced to and always would.
Ronald K. Siegel

Ronald K. Siegel, Ph.D. (1943-2019) was a psychopharmacologist on the faculty of the Department of Psychiatry and Biobehavioral Sciences at the UCLA School of Medicine and was a leading authority on the social and psychological effects of drug use. The author of Fire in the Brain and Whispers: The Voices of Paranoia, his research has also appeared in Psychology Today, Scientific American, and Omni as well as the Journal of the American Medical Association and the American Journal of Psychiatry.

"Siegal's book will be controversial, but his perspective on intoxication as a fact of nature and not just of culture cannot be ignored. Intoxication should be required reading for the nation's drug czar."

"[Ronald K. Siegal] knows more about how drugs work than anyone else alive. . .an intrepid researcher [and] cartographer of consciousness."

"Siegal's book may draw spirited attacks. . .but his ideas are respected by drug authorities."

“Reading Intoxication one becomes conscious of the many different aspects of the drug problem, of the usefulness and dangers of psychoactive substances, and of their role and importance in medicine, in religious rituals, and in daily life. . . . Impressive . . . fascinating . . .”

– Albert Hofmann, Ph.D., author of LSD: My Problem Child and coauthor of Plants of the Gods

“Compelling . . . fact-packed. . . . The author carefully surrounds any potential pro-drug interpretation with ample (and graphic) examples of the dangers of drug abuse. . . . thought-provoking.”

"While carefully analyzing the human urge to seek out the effects of mind-altering substances, Siegal draws conclusions based on biological as well as cultural studies. . . .a very interesting and informative read."

"Presenting his conclusions on the biological as well as cultural reasons for the pursuit of intoxication, . . . Siegel offers a broad understanding of the intoxication phenomenon as wll as recommendations for curbing the negative aspects of drug use in Western culture by designing safe intoxicants."

“This book will delight those who want to be informed, but not lectured, about drugs. . . . I recommend it based on its merits. It's objective, interesting and highly readable.”

“...a fascinating insight into the intoxication complex.”