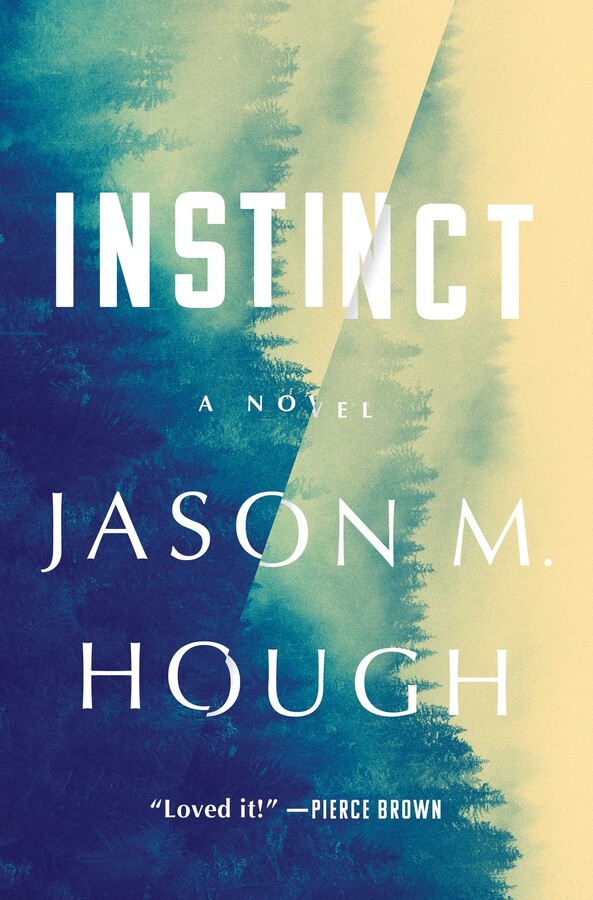 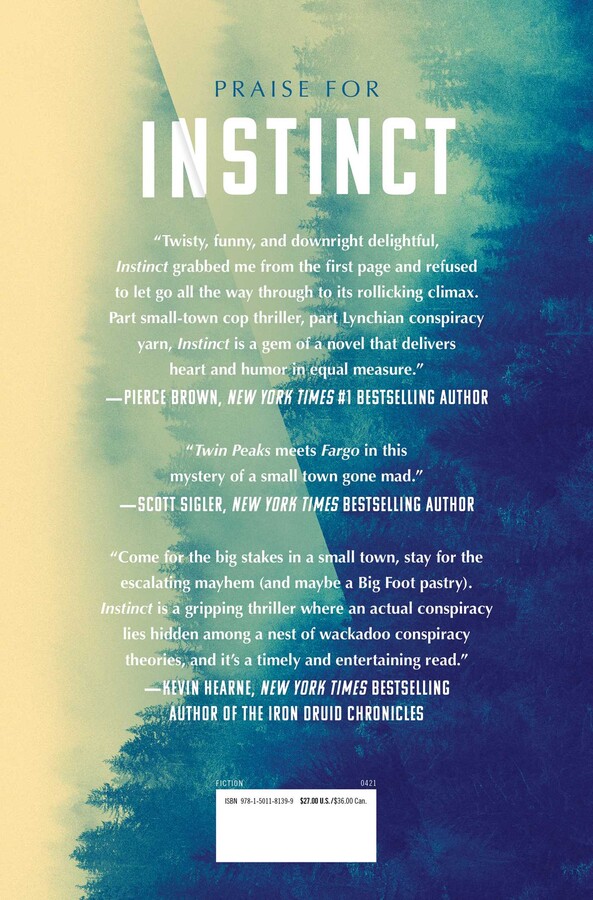 Despite its small size, the small mountain town is home to more conspiracy theories than any other place in America. Officer Mary Whittaker is slowly acclimating to the daily weirdness of life here, but when the chief of police takes a leave of absence, she is left alone to confront a series of abnormal incidents—strange even by Silvertown standards.

An “indoor kid” who abhors nature dies on a random midnight walkabout with no explanation.

A hiker is found dead on a trail, smiling serenely after being mauled by a bear.

A woman known for being a helicopter parent abandons her toddler twins without a second thought.

It’s almost as if the townsfolk are losing their survival instinct, one by one...

As Whittaker digs deeper into her investigation, she uncovers a larger conspiracy with more twists and turns than a mountain road, and danger around every corner. To save Silvertown, she must distinguish the truth from paranoia-fueled lies before she ends up losing her own instincts...and her life!


Only after the funeral ends do I have the courage to mention the owl.

“Please tell me you saw it,” I say to Greg as he pushes the last of the road cones into the trunk of his cruiser.

Greg’s wiping dirt from his fingers onto a pristine white handkerchief. He stops to look at me, those wizened and kind eyes just barely peeking out from under bushy gray eyebrows. “I don’t really know. I guess so?”

“That was just… weird, wasn’t it? Not just an owl in daylight, but the timing.”

It had happened in the middle of the service. The whole town had been crowded around the grave as the casket was lowered. The pastor reciting a verse in his somber, even voice. The mother quietly weeping. Not the father, though. He’d remained stoic throughout his son’s burial.

But then, right as Pastor Osman said something about the wings of angels, an owl flew over the whole gathering, just ten feet above everyone’s heads. Most eyes were downcast in that moment, in prayer or in respect of others. I’d been a bit lost in thought myself, and happened to be looking up for signs of rain. The animal had glided right over us, silent and serene, in a path that took it in a perfectly straight line over the casket, leaving not even a shadow to mark its passage.

I sorta wish I could say it was albino, or even black as night. Something ominous or significant, but the bird was the typical speckled brown and gray. Just like any other owl in the Cascades, I suppose.

“A little weird, sure, but I’ve lived my whole life here, Mary. You get used to it. A little weird isn’t the problem.”

“What is the problem?”

“Embellishment. Just watch, by midweek the story being told in town will have that owl recast as a raven. One with a seven-foot wingspan and glowing red eyes. Something along those lines. In my experience, weird always starts with something pretty mundane. My advice? Don’t mention it to anyone else, lest the story grow.”

I absorb the words in scholarly silence and fall in beside my chief. We walk back up the hill toward the place where Johnny Rogers was buried. The cemetery is old and small, with a gravel parking lot made to hold perhaps twenty cars. Today there were dozens, though, filling the lot and overflowing all up and down both sides of the narrow lane leading up from the mountain road. That many cars meant Greg and I had to step away at the very end of the service in order to direct traffic and, finally, gather up all the cones we’d placed earlier this morning.

I’d thought we would be done once the cones were packed up but now find myself instead standing with Chief Greg Gorman at the graveside of the dead boy.

“Such a tragedy,” Greg says, more to himself than to me.

“He seemed like a good kid,” I say, lamely. I’m still the new arrival in this place, a place where everyone knows everyone, but no one really knows anyone. That’s another nugget of Greg Gorman wisdom, imparted to me at the job interview many months ago.

I consider asking Greg about the boy’s case. It’s been officially ruled an accident. A tragic, bizarre accident, but an accident all the same. Only, I noticed this morning that the file was still on Greg’s desk. Active, in other words. Chief isn’t in the habit of leaving something out unless he’s still working it, so there must be a reason. But now seems like the wrong time to ask, so I let it go.

“What’s next on the agenda?” I ask casually. “Should be a quiet day. We could—”

“I am headed home,” Greg says pointedly. “You should go home, too. I mean that. Take the rest of the day off. Don’t worry, I’ll keep my radio on.”

“Suppose we get a drink, then? A funeral should be followed by a toast, shouldn’t it?” The idea of going home, of being alone, couldn’t be further from my mind.

“Maybe tomorrow,” he says. “After that service, I think an evening of quiet contemplation is in order.”

I nod, but internally I’m already considering other options. A drive down the mountain to Granston, maybe? Plenty of friendly, talkative strangers there who aren’t grieving.

“Listen, Mary,” Greg says, “there’s something I’ve been meaning to talk to you about. Shouldn’t have waited this long, really, and I’m sorry for that.”

“Okay?” I don’t know what else to say. My stomach tightens as I think of all the things he might say next, none of which are good. Am I already out of a job? Has someone complained about me?

He shoves his hands into his suit pockets. We’re both dressed in civilian clothes for the funeral. Greg still pinned his badge to his lapel, though. Mine’s in my purse, along with my phone and my service pistol.

He sighs. “Thing is, with everything going on… what the hell’s that sound?”

The change of subject trips me up, and for a few seconds I have no idea what he’s talking about. But then I hear it, too. My first thought is the engine of the tiny bulldozer the cemetery uses to dig and fill graves. It’s an old rusty thing kept in a shed behind some trees on the other side of the parking lot, and at a distance it makes the same sort of low hum I now hear.

But the earthmover finished its work twenty minutes ago. I remember watching it lumber over there as I was waving cars out onto the main road. Still, I say it, because it’s all I can think of. “Bulldozer?”

We both know it doesn’t fit. The sound is too even, yet also somehow not. It has a kind of wavering quality to it. Almost like someone humming. A chill runs up my spine. It’s not what I’d call a good sound. It seems to come from everywhere, though as it grows in volume I get the sense that’s wrong, too. The source is somewhere nearby. I start to look around.

“I know that sound,” Greg says in the same instant that I spot the phone lying in the grass, just a few feet from the fresh grave.

It’s an old model iPhone with a cracked screen, tucked inside one of those rugged cases people up here love. Adds a bit of outdoorsy charm to a dreaded piece of fashionable technology. An alarm icon dances on the screen, with a label just below:

ANOTHER DAY ANOTHER DOLLAR

The chosen tone to go with this is that of an Aboriginal didgeridoo, a wind instrument that sounds a bit like someone chanting in a very low voice.

“I’ve heard that before,” Greg says, studying the screen over my shoulder. “Can’t remember where, though.”

“Somewhere in town?” I suggest.

“That’s some fine detective work,” Greg says, grinning under his thick mustache. “Here, let me take it. Someone must have dropped it during the service. Once they realize, they’ll call it and I’ll sort it out.”

“You were about to say something, before the phone went off…” I prompt.

Greg gives a little shrug. “Know what? Never mind. That can wait until morning. Right now I think some ‘quiet contemplation’ is what the doctor ordered. I’ll see you tomorrow, Mary.” 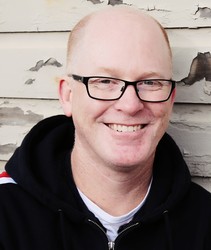 Jason M. Hough is the New York Times bestselling author of The Dire Earth Cycle and the near-future spy thriller Zero World and is a proud member of SFWA (Science Fiction and Fantasy Writers of America) and ITW (International Thriller Writers). When not writing, reading, or playing with his kids, he spends his time exploring virtual reality or trying to coax his 3D printer into doing something useful. He lives near Seattle, Washington, with his wife, two sons, and a dog named Missbuster.

"Come for the big stakes in a small town, stay for the escalating mayhem (and maybe a Bigfoot pastry). Instinct is a gripping thriller where an actual conspiracy lies hidden among a nest of wackadoo conspiracy theories, and it's a timely and entertaining read."