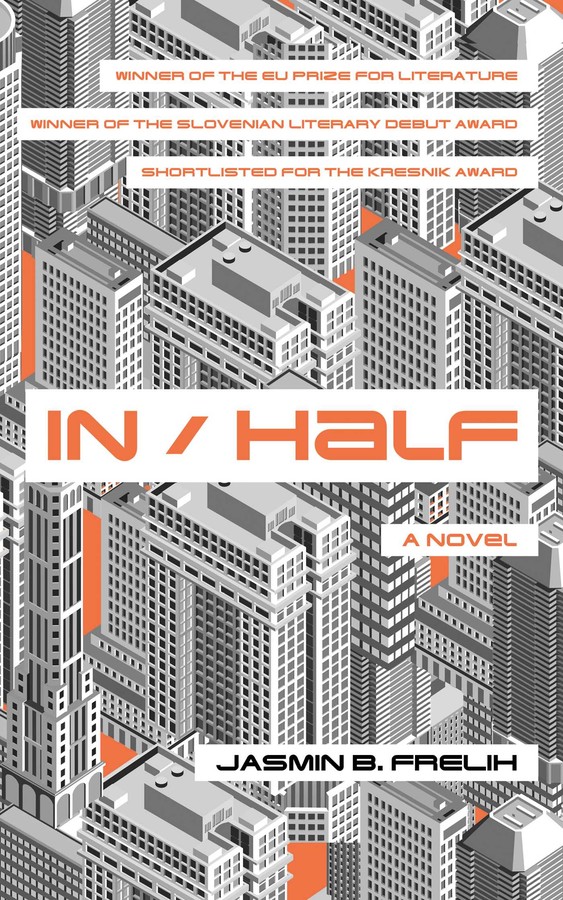 By Jasmin B. Frelih
Translated by Jason Blake
Published by Oneworld Publications
Distributed by Simon & Schuster
LIST PRICE $5.99
PRICE MAY VARY BY RETAILER

An extraordinary debut from one of Slovenia's rising stars

It's 2036, twenty-five years after the 'Great Shutdown' destroyed the global communications network. In this post-Internet world, three childhood friends come together to celebrate their fiftieth birthdays. But with Zoja, a radical poet; Evan, an addict theatre director; and Kras, a former minister for war in attendance, this was never going to be a subdued occasion...

This hilariously anarchic debut plunges the reader into a world that is at once unthinkable and disturbingly familiar. Alarming, exhilarating and keenly focused on the contradictions of modernity, this is an astounding novel from a powerful new voice.

‘A topical narrative with delightfully experimental stylization... In/Half has established Frelih as one of Slovenia's rising literary stars.’

‘The blend of technologies old and new results in a uniquely speculative and philosophical novel.'

'Sustains its ghostly, ethereal tone and will be appreciated by readers looking for a mind-bending puzzle.'

‘A novel that repays careful reading for some brilliant set-pieces, for its believably flawed characters, and for its bone-dry, even cynical, wit.’

‘One of the biggest emerging literary talents in Central and Eastern Europe.’

‘A dizzying reading experience... Like a breakneck surf session that keeps you glued to the screen until the early hours...with an unusually addictive mix of styles, tones, perspectives and meaning.’

‘Three worlds, each with their distinct atmosphere, ranging from highly technological to the domestic, bring into being different languages that do not lack the feeling of alienation or nascent activism. Frelih sovereignly handles this second order of speech, his alienation is charged less by the librarian style of the erudite part of metafiction than with the density and intensity of poetic speech, in place of authorial narration we are submerged in fragments that, with their forcefulness, shine through and reflect the fates of individuals.’

‘In/Half is an overwhelming vision of the future...and shows an exceptional writer at work.’

‘Frelih writes with a mature style, covering a wide range of themes linked to contemporary society, emphasising the grotesque and the fabular in an almost Kafka-esque style. The tone is by turns poetic, satirical, ironic and apocalyptic, finally moving towards surreal chaos. It is this style that makes Frelih's novel exceptional.’

‘Mature, structurally varied, rich in content and stylistically accomplished... Frelih's first novel offers a decisive, yet unobtrusive sense of engagement, prompted by the recognition that the world of the third millennium is out of joint and the awareness of how hard it is to pinpoint that first, unequivocal mistake which sent humanity down a blind alley. We are haunted by a state of inevitability and searching for shelter – compassion – which does not come. Frelih doesn't beautify the world, he just sets it square in his sight, sharpens it, dissecting the patterns of evil within it.’

By Jasmin B. Frelih
Translated by Jason Blake
Published by Oneworld Publications
Distributed by Simon & Schuster
LIST PRICE $5.99
PRICE MAY VARY BY RETAILER