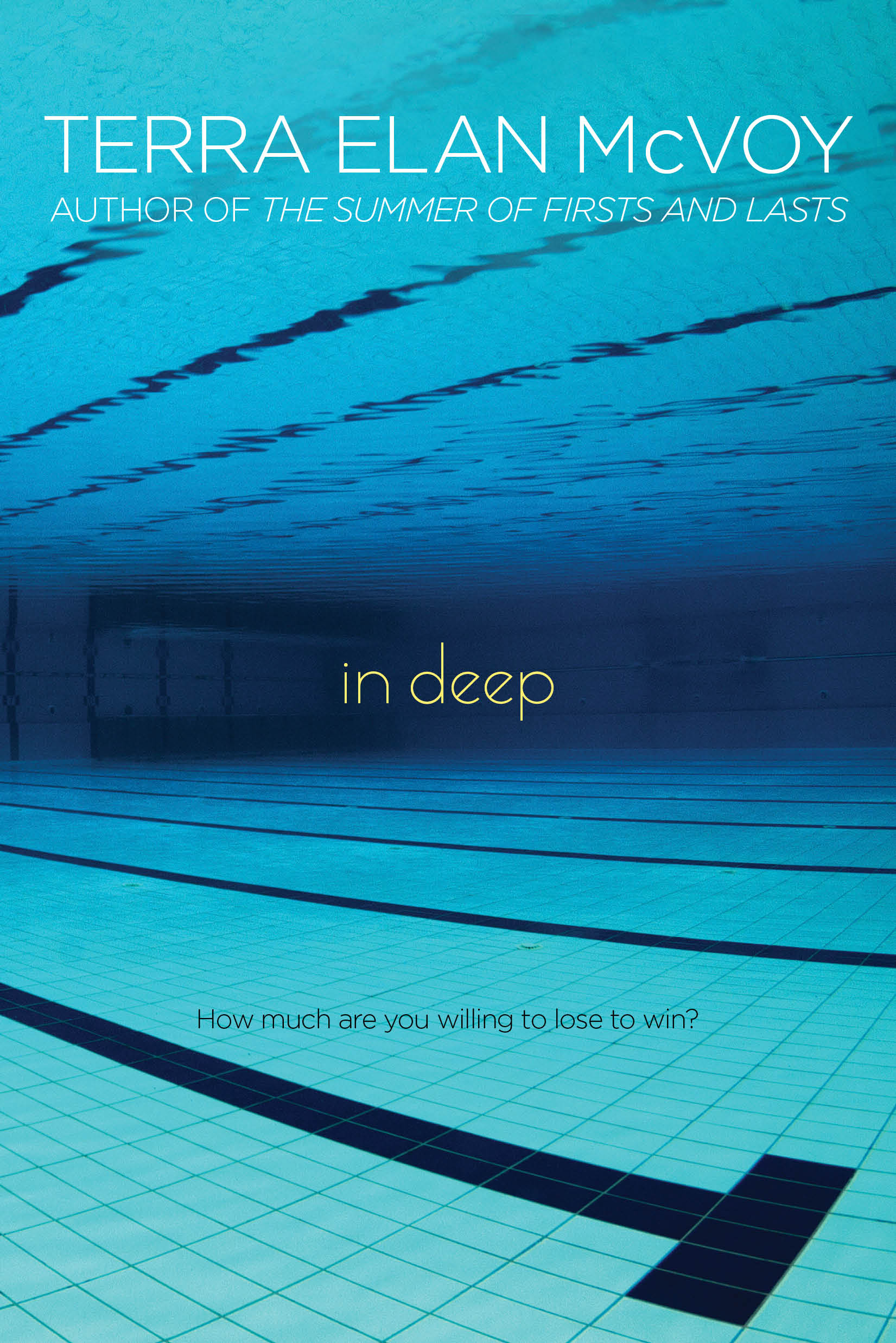 Ultracompetitive Brynn from The Summer of Firsts and Lasts craves swimming victory—and gets in over her head—in this irresistible novel from Terra Elan McVoy.

Nothing else matters to Brynn as she trains her body and mind to win. Not her mediocre grades and lack of real friends at school. Not the gnawing grief over her fallen hero father. Not the strained relationship with her absent mother and clueless stepdad. In the turquoise water, swimming is an escape and her ticket to somewhere—anywhere—else. And nothing will get in her way of claiming victory.

But when the competitive streak follows Brynn out of the pool in a wickedly seductive cat-and-mouse game between herself, her wild best friend, and a hot new college swimmer, Brynn’s single-mindedness gets her in over her head, with much more than a trophy to lose.

In Deep 1
GRIER AND I ARE FLOATING in her glossy, turquoise pool, both of us in separate inner tubes, pushing each other around with our feet and staring at the dark, humid sky when she goes, “Dare me to do something.”

I raise my head to look at her. Sure, she had suck times at the meet today, and pizza with the team afterward is always a Michael Phelps–praising bore, but we haven’t played Dare in a while. Mainly because at this point we can’t think of anything we haven’t already done that isn’t completely disgusting, would require too much pain-in-the-ass planning or equipment, or would end up with one of us getting seriously hurt or arrested. That I got tired of her chickening out one too many times was part of it too, which is why I’m surprised now. And, I’m out of practice.

“Uh—I dare you to pretend you’re in love with Shyrah for a week.”

She groans. “Way too easy.”

Which is true. If one of the other girls in the club even looks at Shyrah for too long at practice, he’s sneaking up to me later, asking me should he ask her out.

“Okay. I dare you to . . .” I look around, trying to find something. We already climbed on top of the cabana once, to see if we could jump from there into the pool, but the distance really is too far. “I dare you to lick Peebo’s butthole.”

She grins and starts whistling for her dog.

“Here,” she says, slipping free of her tube. I watch her slide underwater to the ladder, where she climbs out, tugging the edges of her bikini away from her narrow butt. I’ve seen Grier’s body a thousand times, but it doesn’t make her elfish perfectness any less obvious. Other girls on the team are jealous, I guess. Maybe I would be too if she weren’t so slow in the water. She even looks good with her head shaved now, after I Jackassed her with a pair of clippers last month and took a huge hunk right out of her dark, glossy locks. Her mom was plenty pissed, but even Grier thought it was funny, and now she just looks sexier. More tough.

She moseys over to the cabana and starts rummaging behind the bar. I don’t really feel like drinking tonight, but at Grier’s it’s always around. Daring her to drink some kind of crazy mixed-up shot isn’t much of a dare anymore either, but maybe this will make her less pissy or whatever it is she’s been lately.

Not that Grier is that complicated. I met her when I left my high school team to join our more challenging private swim club at the end of ninth grade. Grier’s a sprinter (I’m long-distance), and she’d already been a member of the club for two years, so she seemed dedicated, like me. Over time, though, she revealed herself to be the kind of girl I didn’t think existed in real life. That gorgeous rich girl with an absent, globe-trotting father and a pill-addled, socialite mother; the girl who gets to spend three hundred dollars at Whole Foods on her parents’ credit card over the weekend because that’s easier than either of them having to figure out how to actually take care of her. She’s that girl who vacations in Bali or the cliffs of Iceland or some other no-high-schooler-really-visits-there place. She goes to the best private school in Atlanta, and still her parents are constantly talking about sending her to London because they don’t think she’s getting an adequate education here. (Grier says they just want her out of their hair once and for all, but she’d still love to go.) She swims, mainly, so she can gorge on gourmet pizzas, organic hamburgers, bottomless margaritas, and expensive desserts. In middle school, whenever I read books that had characters like Grier in them, I’d say, “Nobody’s life is really like that.” But that was back when I actually read books. That was before I met Grier.

At first, when she started inviting me over, I thought she was just being nice. It took only two sleepovers though to understand that a rich, pretty girl like her doesn’t have to be nice to a scrappy, Salvation Army latchkey kid like me. Instead Grier thought I was funny. Different. She told me once that I’m the only other person who hates people more than she does. And if it works for her, I’m not going to argue.

Now I spend pretty much every weekend over at her place. For me, Grier’s the only one in the club who comes close to having a sense of humor or rebellion. Besides, being at her house means I don’t have to hang out with Mom and my stepdad, Louis, either. Plus there’s the cushy environs and excellent chow. Though Grier and I do the normal things that girls do together—complain, gossip, paint our toenails—we also spend a lot of time watching human stunt videos, which is where Dare came from. I thought I was the only one who was obsessed with “People Are Awesome,” and Jackass, until I commented under my breath about it at practice, and Grier’s eyes lit up like a Christmas tree on fire. We’ve filled a lot of our weekends with trying to invent stunts of our own—I’m still working on the four-inch-nail-in-the-nose trick—but for the last few weekends, because of what, I don’t know exactly, we just watch the videos. And even then she seems bored.

Tonight though, we’re apparently back to more than watching. When Grier comes over to sit on the edge of the pool, she’s holding a round container.

“Dare me to snort this salt.”

Meaning the margarita salt in her hand.

“Yeah, but don’t you want to see what happens? There’s a sugar rimmer in there too. I’ll dare you to do that after.”

I don’t much want to snort anything, since enough water goes up my nose on a daily basis, but Grier’s going to do it whether I dare her or not, and then she’ll just call me chicken all night for not making it official. I know. I’ve done it to her.

“Okay, fine. I dare you to snort that salt.”

She takes off the lid and stares into the plastic dish for a moment, and then puts a couple of pinches in a thin line on her wrist. I paddle closer, wanting to see what happens. She waits a beat, holds her wrist up to her nose, and then, whiff, the white line disappears.

When she looks up, there’s blood pouring out her nose.

She coughs again, slightly gagging. “Stings like a bastard.”

I climb out of the water and grab a bath sheet that probably costs more than all the cheap, secondhand furniture in my room combined.

“Wait. Check it out.” She points into the pool. Drops of her blood are spiraling and unfurling in the water like devilish smoke. We stare at the blood for what feels like five minutes. Long enough so that the red forms more of a cloud than wisps.

“You need some ice on that.” I hand her the towel and stand up for the house.

“Hold up.” She leans back toward the lounge chair behind her, reaching for her shorts and her phone. “Take my picture first.”

Her chin, throat, and chest are now dripping blood.

“Why not?” She grins. “At least then we’ll have proof something happened, for once. Don’t be so boring.”

That’s a dumb thing to do out of boredom, I almost say. But it’d sound defensive. I need to get her cleaned up anyway, because apparently I’m snorting that sugar next. 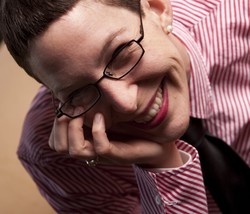 Terra Elan McVoy has held a variety of jobs centered around reading and writing, from managing an independent children’s bookstore, to teaching writing classes, and even answering fan mail for Captain Underpants. Terra lives and works in the same Atlanta neighborhood where her novels After the Kiss, Being Friends with Boys, and Pure are set. She is also the author of The Summer of Firsts and Lasts, Criminal (an Edgar Award nominee), and In Deep. To learn more, visit TerraElan.com and follow Terra on Twitter at @TerraMcVoy.