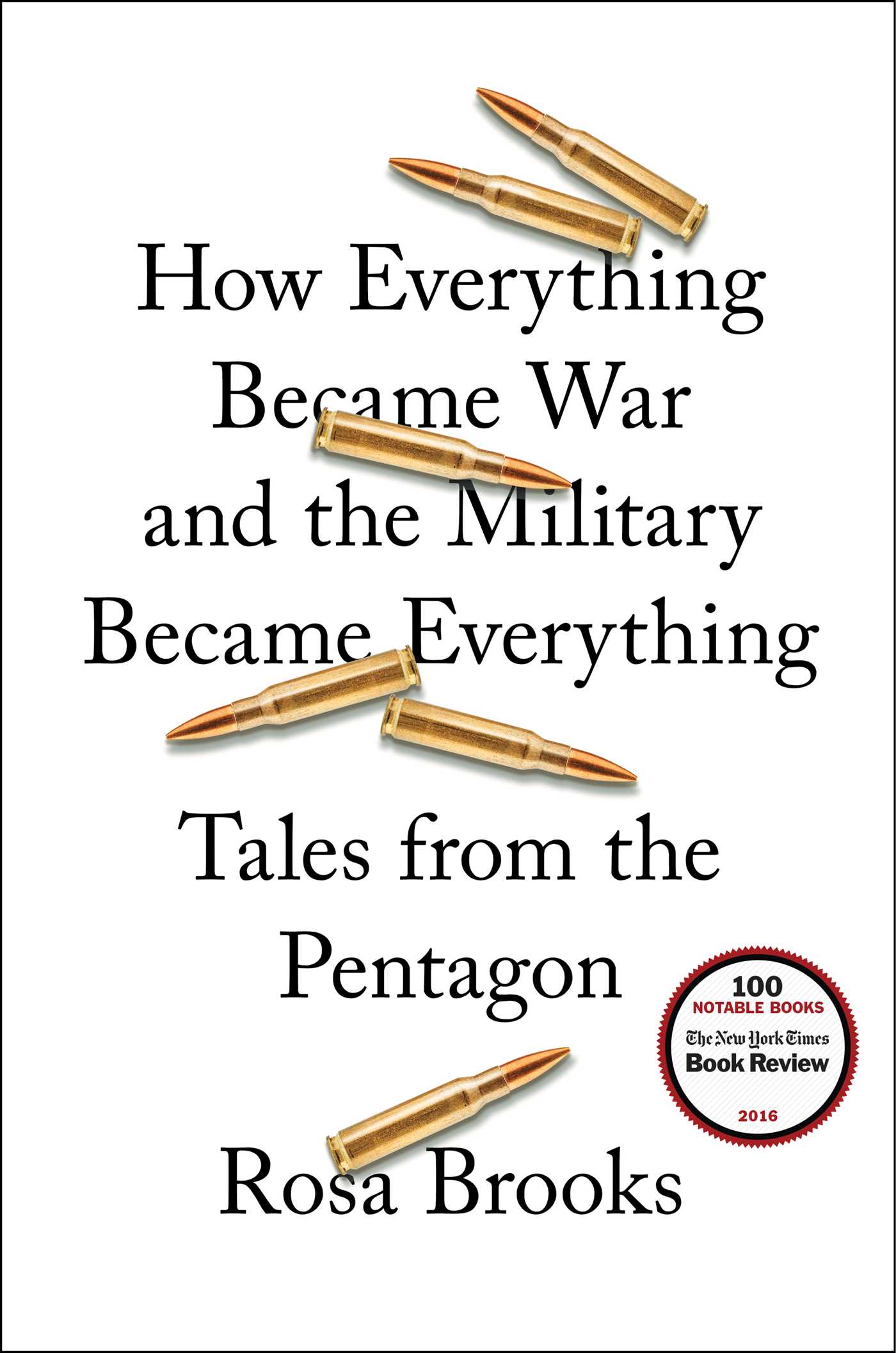 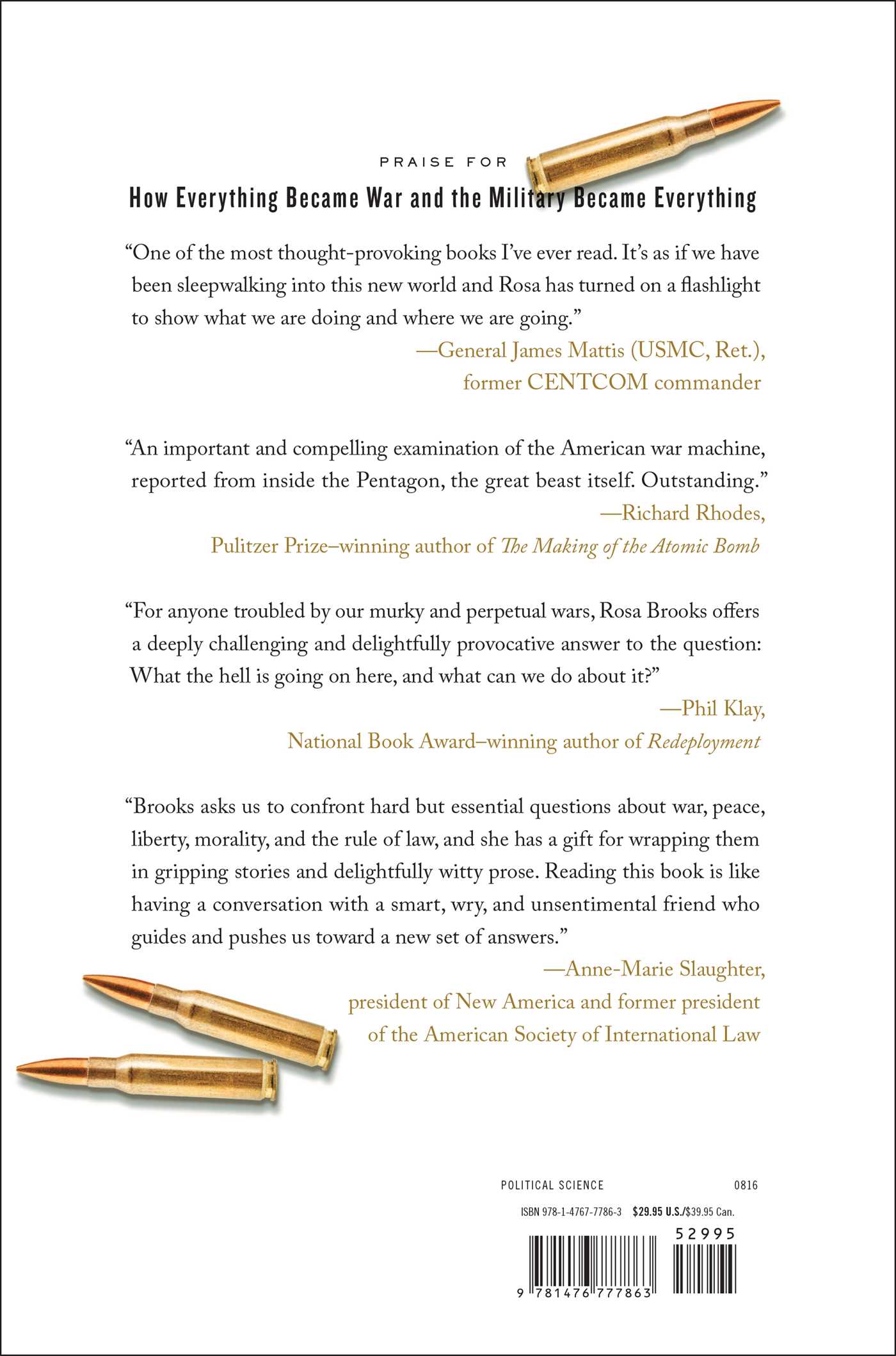 By Rosa Brooks
LIST PRICE $29.95
PRICE MAY VARY BY RETAILER

The first serious book to examine what happens when the ancient boundary between war and peace is erased.

Once, war was a temporary state of affairs—a violent but brief interlude between times of peace. Today, America’s wars are everywhere and forever: our enemies change constantly and rarely wear uniforms, and virtually anything can become a weapon. As war expands, so does the role of the US military. Today, military personnel don’t just “kill people and break stuff.” Instead, they analyze computer code, train Afghan judges, build Ebola isolation wards, eavesdrop on electronic communications, develop soap operas, and patrol for pirates. You name it, the military does it.

Rosa Brooks traces this seismic shift in how America wages war from an unconventional perspective—that of a former top Pentagon official who is the daughter of two anti-war protesters and a human rights activist married to an Army Green Beret. Her experiences lead her to an urgent warning: When the boundaries around war disappear, we risk destroying America’s founding values and the laws and institutions we’ve built—and undermining the international rules and organizations that keep our world from sliding towards chaos. If Russia and China have recently grown bolder in their foreign adventures, it’s no accident; US precedents have paved the way for the increasingly unconstrained use of military power by states around the globe. Meanwhile, we continue to pile new tasks onto the military, making it increasingly ill-prepared for the threats America will face in the years to come.

By turns a memoir, a work of journalism, a scholarly exploration into history, anthropology and law, and a rallying cry, How Everything Became War and the Military Became Everything transforms the familiar into the alien, showing us that the culture we inhabit is reshaping us in ways we may suspect, but don’t really understand. It’s the kind of book that will leave you moved, astonished, and profoundly disturbed, for the world around us is quietly changing beyond recognition—and time is running out to make things right. 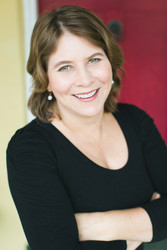 Rosa Brooks is a Senior Fellow at the New America Foundation, a columnist for Foreign Policy, and a law professor at Georgetown University. She previously worked at the Pentagon as Counselor to the Under Secretary of Defense for Policy; in 2011, she was awarded the Secretary of Defense Medal for Outstanding Public Service. Brooks has also served as a senior advisor at the US Department of State, a consultant for Human Rights Watch, and a weekly opinion columnist for the Los Angeles Times. Her articles and essays have appeared in The New York Times, The Washington Post, The Wall Street Journal, and dozens of other newspapers and magazines, and she is a frequent television guest, with appearances on the Charlie Rose Show, the Rachel Maddow Show, the Today show, Meet the Press, and Erin Burnett OutFront. Brooks lives in Alexandria, Virginia, with her husband Joe, her daughters Anna and Clara, and a Brittany spaniel named Scout.

“A dynamic work of reportage, punctuated by savory details… It delights. The author is a chipper field guild and canny ethnographer, writing with refreshing honesty about the folk ways of the Department of Defense, which often confound outsiders… Illuminating.”

“Brooks writes with clarity and epigrammatic wit.... In impressive and often fascinating detail, she documents that the boundaries between war and peace have grown so hazy as to undermine hard-won global gains in human rights and the rule of law.”

“One of the most thought-provoking books I’ve ever read. It’s as if we have been sleep walking into this new world and Rosa has turned on a flashlight to show what we are doing and where we are going.”

“An important and compelling examination of the American war machine, reported from inside the Pentagon, the great beast itself. Outstanding.”

“For anyone troubled by our murky and perpetual wars, Rosa Brooks offers a deeply challenging and delightfully provocative answer to the question: What the hell is going on here, and what can we do about it?”

“In a masterful argument, sometimes between her own contradictory feelings, Rosa Brooks shows how battle lines have been blurred. Soldiers work, and sometimes rule, in areas once the uncontested realm of civilians. It is another complex, potentially dangerous, challenge that we must work to understand. Start with this book.”

“Rosa Brooks asks us to confront hard but essential questions about war, peace, liberty, morality, and the rule of law. As challenging as these issues are, she has a gift for wrapping them in gripping stories and delightfully witty prose. Reading How Everything Became War and the Military Became Everything is like having a conversation with a smart, wry, and unsentimental friend who guides and pushes us toward a new set of answers.”

– Anne-Marie Slaughter, president of New America and former president of the American Society of International Law

“How Everything Became War is essential reading for anyone who wants to understand the continuing evolution of the modern military, and who is prepared to engage in serious thinking about the future of armed conflict.”

"Brooks provides a masterful analysis of how global connectedness has created vast new responsibilities and vulnerabilities for the armed forces of the United States...."

“A trenchant, timely new book.... Approaching her sprawling subject in a rambling voice that mixes politics, human rights, history, literature, travel to desolate lands and some of her own story, Brooks produces an ambitious, courageous tome that helps both sides of the wide civilian-military divide.”

“Rosa Brooks has written the best book yet on the ‘space between’—that messy blend of war and not-war that characterizes so much of our world. As equal parts legal scholar, policy practitioner, and engaged citizen, she’s the perfect guide for a tour of our national nobility... and absurdity."

– Nathaniel Fick, bestselling author of One Bullet Away

“A hugely significant, very thought-provoking examination of how and why America's armed forces have been pulled into myriad missions beyond the ‘strictly military’ tasks in which they traditionally engaged in past decades, written by a woman uniquely qualified for such an undertaking. How Everything Became War and the Military Became Everything raises hugely important questions that should spark serious conversations in Washington and throughout the United States.”

“The great strength of this book is that it manages to be thought-provoking and entertaining at the same time.... [Brooks] writes with knowledge and wit.”

“In this clear-eyed account of her time at the Pentagon, Brooks, a human-rights lawyer by training, makes an eloquent case for just what is at risk.”

“By turns unsettling and brilliantly insightful, Brooks' work is a must-read for everyone concerned about national security and troubled by the U.S. military’s steadily expanding budget at the expense of social programs.”

“An important and insightful book.... Brooks is a clear and entertaining writer…. Her sense of humor is quite acute.”

“Rosa Brooks is one of the most fluid, thoughtful and interesting writers in the field of national security and has lived a fascinating life as a Pentagon official, public intellectual, law professor and Army spouse. This life has informed her important and entertaining new book, an intriguing hybrid of memoir and policy analysis that is the best exposition of how it is that, a decade and a half after 9/11, we now live in a strange twilight world where the old boundaries between war and peace are being erased. There is no better guide to how and why this happened than Brooks.”

– Peter Bergen, author of The United States of Jihad

“Brooks has written a book that is both personal and provocative – a must-read for anyone interested in the inner workings of the Pentagon and how we got to the point where the military has become everyone’s favorite hammer.”

“The question of where the lines are between war and peace, between the military and the civilian world in 21st-century conflicts that never seem to end, is among the most vexing and important in American politics today. In How Everything Became War and the Military Became Everything, Rosa Brooks deftly tackles these issues, weaving together rich analysis with personal anecdotes and stories that pull you in. It’s a book that won't just inform you, but make you think.”

– P.W. Singer, strategist at New America and author of Wired for War, Cybersecurity and Cyberwar, and Ghost Fleet

"Perceptive, inquisitive, sensitive and persuasive, How Everything Became War and the Military Became Everything is troubling but rewarding. Combining memoir, journalism and history, it is an insightful analysis of where the United States and its military sit today, how they got there and where they might turn next for more balance and restraint."

"In a post-9/11 world of persistent warfare... [Brooks] expertly guides readers through this confusing new terrain.... Whether she's invoking Wittgenstein's duck-rabbit image to illustrate the ambiguity of language and the importance of context, dissecting an excruciatingly difficult Hague Tribunal case assigning guilt to an obscure Croatian soldier, or drawing comparisons between a Putin-ordered assassination and an Obama-ordered drone strike, she never fails to stimulate and enlighten. Legal theorists and policymakers will approve the scholarship and close analysis; general readers will appreciate the sensitive storytelling, the wit, and the uncommon good sense."

“This book is an important addition to the professional body of literature on the evolution of warfare, providing readers with ideas on the future of warfare and the required institutions, legal frameworks, and strategies that need to be in place to maintain stability against an increasing number of threats to the post World War II order.”

"This book forces you to think hard, but it is so much fun to read you almost do not realize it."

“Written with a casual but razor sharp wit, Brooks'... narrative is fascinating and piercing. She draws the reader into a world that one quickly beings to understand is a quagmire of complexity few, even within the highest offices of the land, fully appreciate.”

“Having read this engaging work, I find her wholly credible, delightfully readable and quite convincing. Confounded by the vexations of today’s unwon conflict, she asks more questions than she answers. But that kind of deadly ambiguity is cooked into the vile, ill-defined nature of the sprawling mess we call war these days.... If you, too, wonder what happened since 9/11 and why, you will get a lot from this fine book from Brooks.”

“This book contains keen insights from a sharp lawyer who served in important policy positions at the Pentagon... Brooks’ work is also important, in my view, to better understand how a serious-minded civilian thinks about the U.S. military.”

– From the Green Notebook

By Rosa Brooks
LIST PRICE $29.95
PRICE MAY VARY BY RETAILER