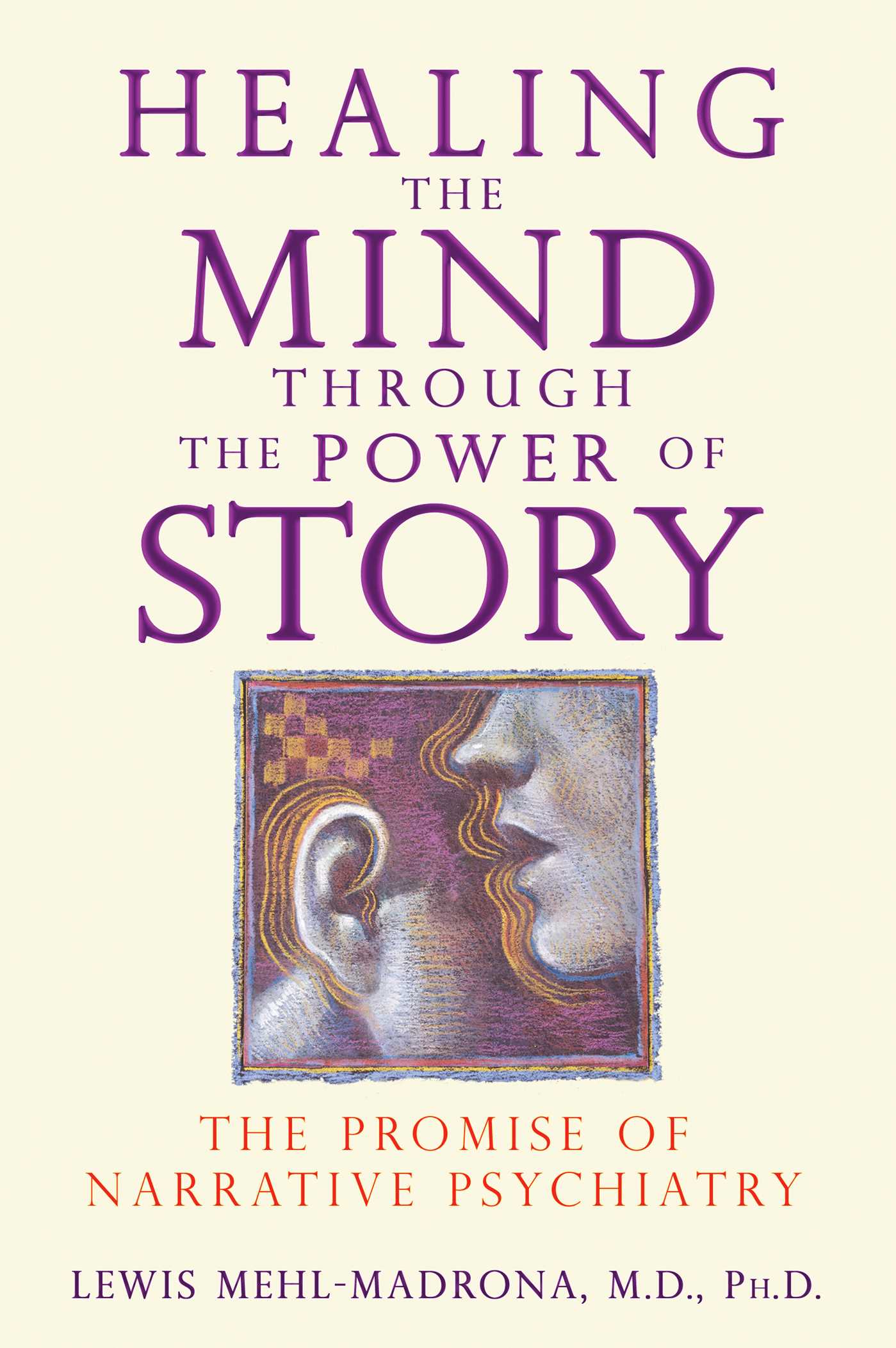 Healing the Mind through the Power of Story

The Promise of Narrative Psychiatry

Conventional psychiatry is not working. The pharmaceutical industry promises it has cures for everything that ails us, yet a recent study on antidepressants showed there is no difference of success in prescribed pharmaceuticals from placebos when all FDA-reported trials are considered instead of just the trials published in journals. Up to 80 percent of patients with bipolar depression remain symptomatic despite conventional treatment, and 10 to 20 percent of these patients commit suicide.

In Healing the Mind through the Power of Story, Dr. Mehl-Madrona shows what mental health care could be. He explains that within a narrative psychiatry model of mental illness, people are not defective, requiring drugs to “fix” them. What needs “fixing” is the ineffective stories they have internalized and succumbed to about how they should live in the world. Drawing on traditional stories from cultures around the world, Dr. Mehl-Madrona helps his patients re-story their lives. He shows how this innovative approach is actually more compatible with what we are learning about the biology of the brain and genetics than the conventional model of psychiatry. Drawing on wisdom both ancient and new, he demonstrates the power and success of narrative psychiatry to bring forth change and lasting transformation.

The stories we hear as children are captured forever within our nervous systems. These stories contain information about the meaning of our lives, what value we have, what is respectable and what is not, what is ethical and what is not, and how to behave in all the situations we encounter. This is why psychiatry is the science of stories and storytelling, because our social interaction is fully storied. Stories guide us all the way.

I will go further and argue that stories (and the social relationships in which they are told) shape our brains. It is the social milieu that forms the brain of a young child. I have seen children who sat in cribs in orphanages until they were six years old. I remember particularly one child form Bulgaria whose American parents had adopted her at age six. When I saw her at age ten, she was far from normal in her social interactions. She could readily have received a psychiatric diagnosis, though I prefer to avoid labels and to stick to the story. Her story was that she had virtually no human care until age six, and her brain reflected that lack of development. By age twelve, she was still biting herself, having difficulty modulating the extremes of her emotions, and barely able to interact with much younger children. She and other children like her are important examples of how much our social environment shapes our brain, and, not, as many of my colleagues have imagined, does the brain shape the social environment.

At this point I can hear the voices of my psychology students who would be shouting, “Wait, isn’t mental illness genetic? Doesn’t it come from chemical imbalances? What do you mean we learn how to be mentally ill?”

They are lost in the nurture-nature argument. Is behavior the result of life experience or is it hardwired in the brain? Here’s what those theorists didn’t know. The brain (nature) is shaped by experience and interacts with the environment to change its environment to match its experience. In a later chapter we will talk more about epigenetics, the new science of how experience changes the genetic code. What is so exciting to those of us who believe in healing is the realization by the molecular geneticists that life experience reshapes our DNA.

What this all means is that drugs are perhaps the least effective way to change brains. Social relationships and experience are much more powerful. This has certainly been my experience working as a psychiatrist and studying traditional healers. Traditional elders from multiple tribes had told me for years that experience changes biology. The essence of their social and spiritual healing practice relies upon their acceptance and enactment of that story. They didn’t need a biochemical or physiological mechanistic explanation to accept the story arising from their observations. They knew that changing the relationships among people in families and communities changes their biology. They knew that life-threatening illnesses can disappear given sufficient change. My Cherokee ancestors had an ultimate ceremony that embodies this. If at least two teams of seven healers had not facilitated a cure of a very sick person, and death seemed imminent, drastic measures were taken. The person’s name was changed.

Seems absurd, doesn’t it, to our conventionally academically trained minds? What we don’t appreciate on the surface is how the name, in Cherokee culture, referred to all the stories ever told about the person. With a new name, that person now had different parents, children, spouse, work, and status in the community. The early anthropologists who described these procedures were astounded that it could happen, because they associated the identity with the visual body (European practice) while the Cherokee associated the identity with the symbolic body (the name). The Cherokee could do what the Europeans could not. They could completely change how they interacted with the person when that person had a new name. Cures were documented from this procedure. I’ve often dreamed of doing this today, but identity is more fixed today. It’s the downside of driver’s licenses, passports, social security, photography, videography, and the increasing documentation of all that we do. Changing identity can no longer be accomplished by simply changing a name, though I’ve known people who have disappeared from their old life and reinvented themselves in a new place with a new name and a new situation and have gotten well, though the capacity to be able to do this is extremely rare.

What happens when you medicate a brain and fail to alter the social relationships in which that brain is engaged is that the environment slowly reshapes the brain back to its former state, but slightly different, because the drug is still on board. The person is now potentially worse because higher neurohormonal levels are required to produce the same symptoms and overwhelm the effects of the drug. Sometimes this has been called biological tolerance, but I think it is more than that. I think tolerance develops because our social relationships have not changed and force us back to how we used to be.

How does this work in the body? Our bodies are controlled by intricate networks of neurohormones and immune molecules. The experience of fear, for example, results in an activation of the sympathetic nervous system, with the production of norepinephrine and many other molecules. Chronic fear leads to chromic activation, with associated higher levels of cortisol (the so-called stress hormone), which leads to breakdown of our bodies (catabolism as opposed to anabolism). Let’s assume you give a drug called beta-blocker to a person in a state of chronic fear. It prevents the sympathetic nervous system from responding. But you haven’t changed the person’s perception of danger. You haven’t changed the environment in which the person lives, which may actually be dangerous. The need for outpouring of catecholamines still exists. And the body finds a way to produce them.
Lewis Mehl-Madrona

Lewis Mehl-Madrona, M.D., Ph.D., is a physician, associate professor at the University of New England College of Osteopathic Medicine, and executive director of the Coyote Institute for Studies of Change and Transformation. The author of several books, including Narrative Medicine and Coyote Medicine, he lives in Orono, Maine.

“This wonderful book is deep, moving, honest, educational, and will open your mind to the power of storytelling to heal and know more intimately the vastness of our beings. As a physician and indigenous healer, Lewis Mehl-Madrona uniquely blends his knowledge of science and the greater mysteries to help us SEE more clearly.”

“Lewis Mehl-Madrona combines an emerging modern understanding of the power of story to change minds and brains with a traditional recognition of the shaping power of story.”

– Dr. Brian Boyd, author of On the Origin of Stories

“This book will revolutionize how we think about psychological healing, giving us new tools to achieve harmony and balance in all aspects of our lives.”

“. . . Healing the Mind Through the Power of Story is an excellent account of a relatively new perspective of mental health treatment. Mehl-Madrona's explanations of the need for alternative treatments to medications and specific treatment goals for patients with serious mental disorders are well presented. The only concerns brought about by this approach to mental health are public opinion and compliance. The world still lives by the promise of a pill as the cure for any disease, and it is still difficult to get people to accept alternatives to that paradigm, especially in psychology.”

Healing the Mind through the Power of Story

The Promise of Narrative Psychiatry