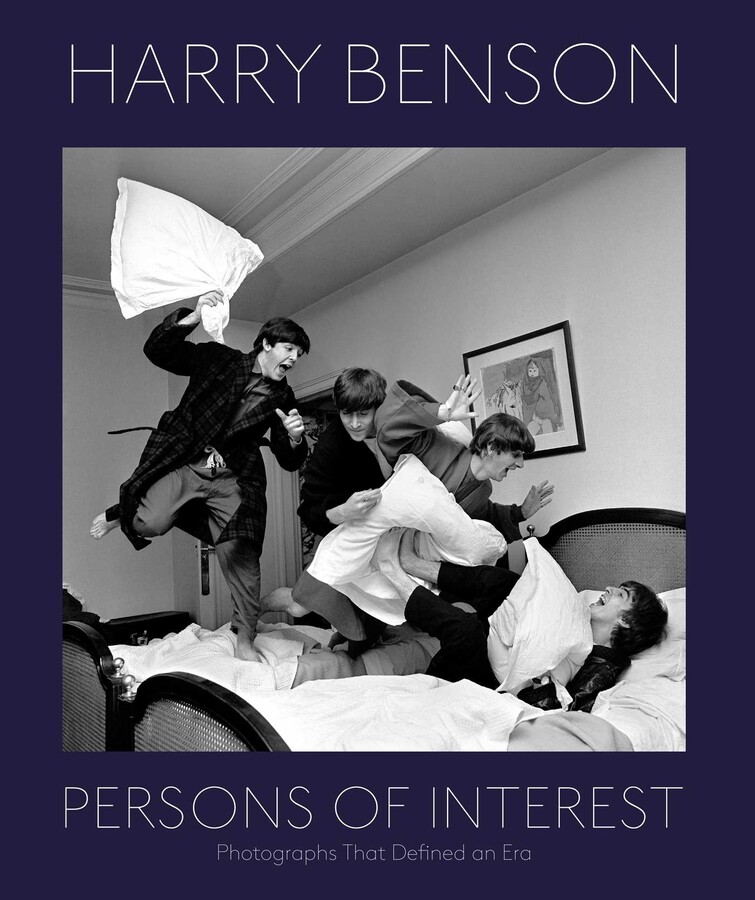 With unique access to the most intriguing and enduring legends of our time, Harry Benson: Persons of Interest is a compelling masterpiece of photojournalism and portraiture.

With decades spent deliberately being in just the right place at just the right time, Benson's photographs and writings of his encounters and adventures are sure to be of broad interest to photography afficionados, history lovers, and people young and old. With subjects ranging from Queen Elizabeth to Amy Winehouse, from Frank Sinatra to Brad Pitt, from Greta Garbo to Kate Moss, from Winston Churchill to Hilary Clinton and Donald Trump, Benson explores and delights our public fascination with his images of the lives of the rich, powerful, and famous.

Critic Leonard Maltin said it all when he wrote, "Harry Benson has been witness to the key events of the past half-century and has never failed to capture their most telling moments with his camera."

Award-winning Scottish photojournalist Harry Benson, CBE began his career at the weekly Hamilton Advertiser newspaper and moved to the Scottish Daily Sketch after his exclusive interviews in prison with Scottish mass murderer Peter Manuel. By 1959 Harry had moved to London’s Fleet Street working for Lord Beaverbrooks’s Daily Express. Harry traveled to America with the Beatles in 1964 and never looked back. Under contract to LIFE Magazine for 30 years, Harry has photographed for major magazines including Time, Vanity Fair, Newsweek, French Vogue, Quest, Paris Match, Forbes, Town & Country, Architectural Digest, People, and The London Sunday Times Magazine. The documentary Harry Benson: Shoot First which chronicles Harry’s 65 year career was released in December 2016 by Magnolia Pictures. In 2009 Harry was made a Commander of the Order of the British Empire by Her Majesty Queen Elizabeth II for service to photography. Harry has received an Honorary Doctorate of Letters from both St. Andrews University, Glasgow School of Art, Glasgow University, and Glasgow Caledonian University. An Honorary Fellow of London's Royal Photographic Society, he has twice been named NPPA Magazine "Photographer of the Year." In 2017 he received the prestigious Lifetime Achievement Award from the International Center of Photography. Harry is the only photographer who has photographed the last 12 U.S. Presidents — from Dwight D. Eisenhower to Donald J. Trump. Harry marched with Dr. Martin Luther King, Jr. during the civil rights movement, photographed the Watts Riots, was embedded in the Gulf War, and was next to Senator Robert Kennedy when he was assassinated. He has photographed countless luminaries including Muhammed Ali, Sir Winston Churchill, Jackie Kennedy, President Charles de Gaulle, Michael Jackson, The Rolling Stones, Elizabeth Taylor, Jack Nicholson, Andy Warhol, Francis Bacon, Kate Moss, and the British Royal Family, including a private sitting with Queen Elizabeth II in Buckingham Palace. There have been 40 gallery/museum solo exhibitions of his work, and sixteen books of his photographs have been published. Harry's wife, Gigi, works with him on his books and exhibitions. Their two daughters, Wendy and Tessa, live in Los Angeles with their families.

"He's a complicated artist, that Harry. But what this shutterbug's eye arranges, sometimes in a split second, is the work of a singular craftsman with a rare gift: raising the click of a camera shutter to the level of art."

"Harry can charm the snakes out of the trees." -Andre Leon Tally, former editor-at-large, Vogue "Harry can shoot fast and make art."

"Benson has shot an astonishing range of celebrities, from Yogi Berra at his ease to the society revelers at Truman Capote's legendary Black and White Ball to the most personal portrait of Bill and Hillary Clinton you've ever seen."

"Harry Benson is perhaps the greatest photojournalist ever. His work has been a part of all of our lives for generations."