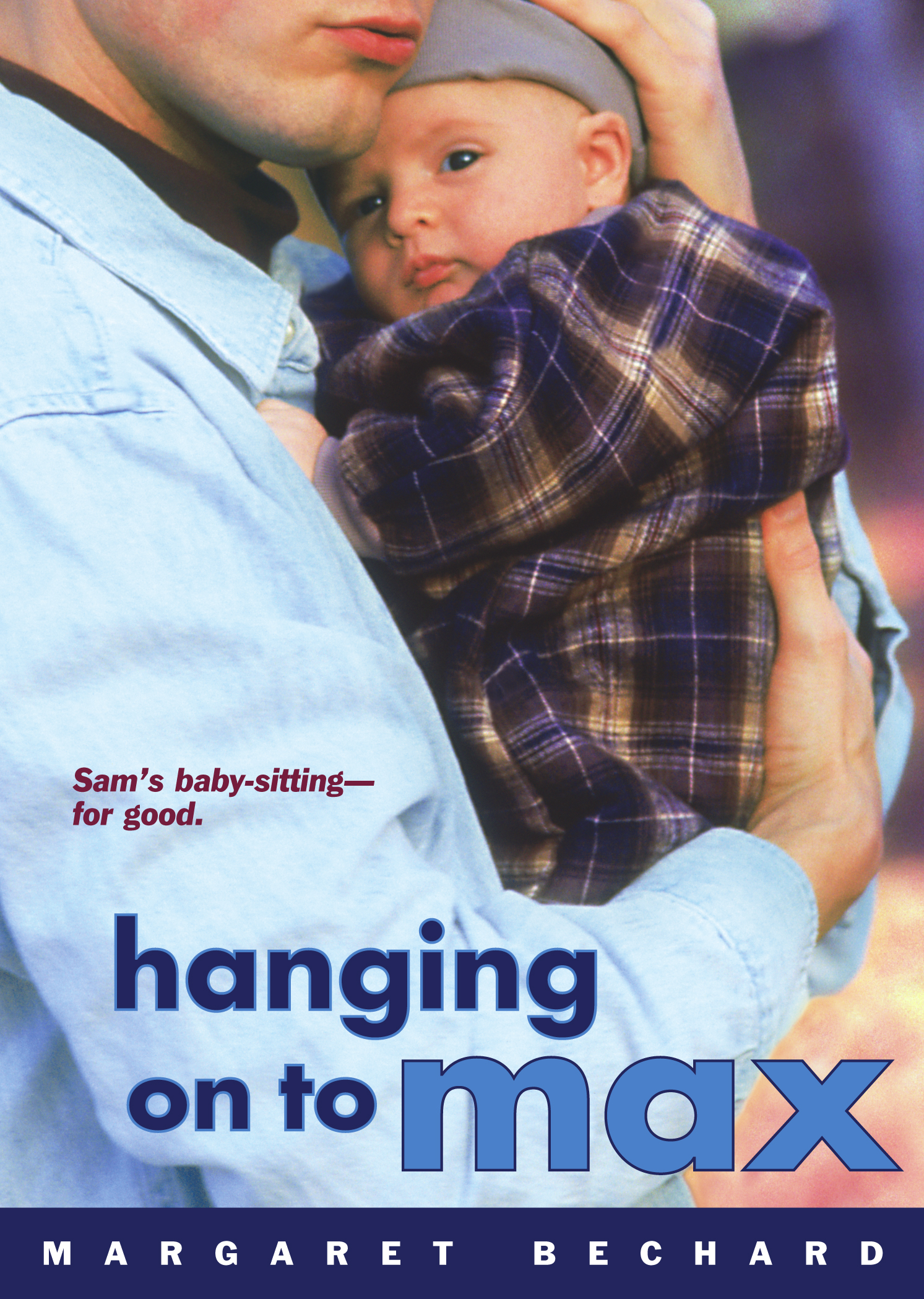 Hanging on to Max

By Margaret Bechard
LIST PRICE $9.99
PRICE MAY VARY BY RETAILER

It's Sam Pettigrew's last year of high school. And he's spending it figuring out how, at age seventeen, he is supposed to care for his baby son, Max.
Max wasn't part of the plan. He wasn't even part of the backup plan. But he's here now, and Sam is attending an alternative high school with other teen parents like himself. Talk about a wake-up call. But Sam is determined to make it work, to show everyone -- his dad, his new girlfriend, himself -- that he has what it takes to be a good dad.
Trading footballs for diaper bags and college brochures for feeding schedules, Sam gives fatherhood his best shot. Only no one told him it would be this hard. What if his best isn't good enough?

The total silence woke me up. I opened my eyes, slowly, and there they all were, watching me. Ms. Garcia, with her sad little worn-out smile. The rest of the class, grinning like monkeys. The room was almost dark, except for the light from the slide projector.

"Nice nap, Sam?" Ms. Garcia asked. Everyone burst out laughing. Ooh. Good one, Ms. Garcia. Except what teacher in her right mind would turn out the lights and show slides at 1:30 in the afternoon?

I shrugged upright in my desk. "Sorry." I shook my head, trying to clear it out.

"Do you know what this slide is, Sam?"

I squinted at the screen. "Jupiter?"

People applauded. Someone in the back whistled. I rubbed my eyes. When I'd fallen asleep, there'd been a slide of a woman making cookies. Ms. Garcia's "Why We Should Study Math" inspirational slide show.

"Okay," Ms. Garcia said, "in 1995 NASA sent a probe from the Galileo spacecraft down through the atmosphere of Jupiter." The slide projector clunked to a picture of the probe.

"It looks like a giant tit," some guy said.

Ms. Garcia sighed. "Okay. Well. The probe sent back a stream of data for 57.6 minutes, until the incredible pressure of the Jovian atmosphere crushed it."

"Poor little probe," the girl next to me said.

"Bor-ing," somebody in back said.

I imagined the probe, analyzing, computing, while the weight of Jupiter pressed in heavier and heavier.

"So," Ms. Garcia said, "do you think the scientists at NASA had to use math to design this probe? And to communicate with it?"

"I'd rather design a giant tit," the guy in back said.

Ms. Garcia sighed. The next slide was a Volvo. "Now back on Earth the safety engineers..."

I put my head back down on the desk and closed my eyes.

The bell woke me up. Kids were grabbing books and papers, cramming them into backpacks. Everybody talking at once. At the front of the room, Ms. Garcia was saying something about turning in the test papers from the beginning of class and something that was due next Wednesday. But nobody was listening. People were jamming up in the doorway, pushing to get out. "Test papers," Ms. Garcia said again.

The guy who sat behind me, who always smelled faintly of sweat and cigarette smoke, slapped my back. "Hey, dude. At least you weren't drooling."

"Right," I said. "Thanks." I stared down at my test. I'd finished it in the first ten minutes. And that had included checking my answers three times. I stood up slowly and shrugged into my backpack.

As I dropped the paper on her desk, Ms. Garcia's hand snaked out and grabbed my wrist. "Give me a couple of minutes, please, Sam?"

I sighed and moved out of the flow of kids. Good job, Sam. Two weeks into September and already you've ticked her off. Already you're blowing this. A kid stopped to explain why he'd done only the first three problems on the test. And then Marcella went into a long thing about how she was going to Mexico for two weeks and needed to know what she'd miss. I shuffled around a little, banged my foot against the garbage can, just to let them know I was still standing there, but nobody paid any attention.

Finally the last kid left. Ms. Garcia ran her fingers through her hair. Her face was tense, like maybe she had a bad headache.

She waved her hand. "I know. I know. Everybody had a bad night last night." She leaned toward me. "The real problem here, Sam, is you don't belong in this class."

I took a breath. "But this is the only math class that fits in my schedule. We went through this whole thing, Mrs. Harriman and me." Besides, I liked this class. I needed an easy class. I took another breath, deeper, slower. Don't panic here, Sam. Get a grip. "I need the credit. I have to graduate this year."

Ms. Garcia tilted her head to one side and looked up at me. "I talked to Mr. Wright, Sam, yesterday. Your math teacher at Willamette View?"

I nodded. Mr. Wright. He'd been okay. Andy had called him "Mr. Wrong," which was pretty dumb, but I'd always laughed, because it was Andy.

"Mr. Wright loaned me a different text. It comes with a computer program. It'll let you work at your own speed."

I laughed. My own speed? My own speed was like a dead stop. "You know, Ms. Garcia, I sort of dropped out of Mr. Wright's class."

"But he says you had a good grasp of all the concepts. A very good grasp, he told me." She pointed to the iMac in the corner. "We can set you up over there. You can work on the computer in class and take the textbook home with you." She held it up, barely. It looked like it weighed about 500 pounds. "It actually gets into precalculus."

I could tell she wanted me to be impressed, excited. "But..." I started.

"And if you get stuck, I can help you out. I was a math major, you know." She smiled at me, her eyes big behind her wire-framed glasses. "I'm not saying it won't be hard work, Sam. But don't just say no. At least think about it." And her smile widened, a little desperate looking. Ms. Garcia, the math major, teaching bonehead math in an alternative high school. "I don't want to lose you, Sam. I think, if you were challenged more, you might sleep a little less."

And who needed sleep? I took another breath. If it would make her happy, if I could stay in her class, if I could graduate like I was supposed to, what was one more thing? "Sure," I said. "Sure. I can give it a try." I took the book. It did weigh 500 pounds.

It took me five minutes to get to my locker. The halls were packed with kids, goofing around, laughing, yelling. Typical end-of-the-day high.

I jerked my locker open. It smelled funny. Gym socks? Rotting sandwich? I didn't have time to figure it out. I grabbed my English book and the stack of government worksheets. I stuffed them all into my backpack and slammed my locker shut.

The secretary looked up from her monitor as I burst through the day care doors. "We'd about given up on you," she said, but she was smiling. They all smiled at me, all the time.

"I had to talk to Ms. Garcia," I said. I shouldered through the door into the crawlers room.

Max leaned out of her arms toward me, his hands stretched out, his face red and swollen with crying.

I took him. "Hey, buddy. It's okay." He wrapped his arms around my neck, taking a big hiccuppy breath, twining his fingers into the long hairs at the back of my neck. I patted him gently. "Let's go home."

Margaret Bechard is the author of five novels for younger readers, and one other young adult novel, If It Doesn't Kill You, which SLJ praised for its "healthy dose of humor." She lives in Tigard, Oregon, with her family.

SLJ starred review A breath of fresh air....A poignant winner of a book.

Hanging on to Max

By Margaret Bechard
LIST PRICE $9.99
PRICE MAY VARY BY RETAILER