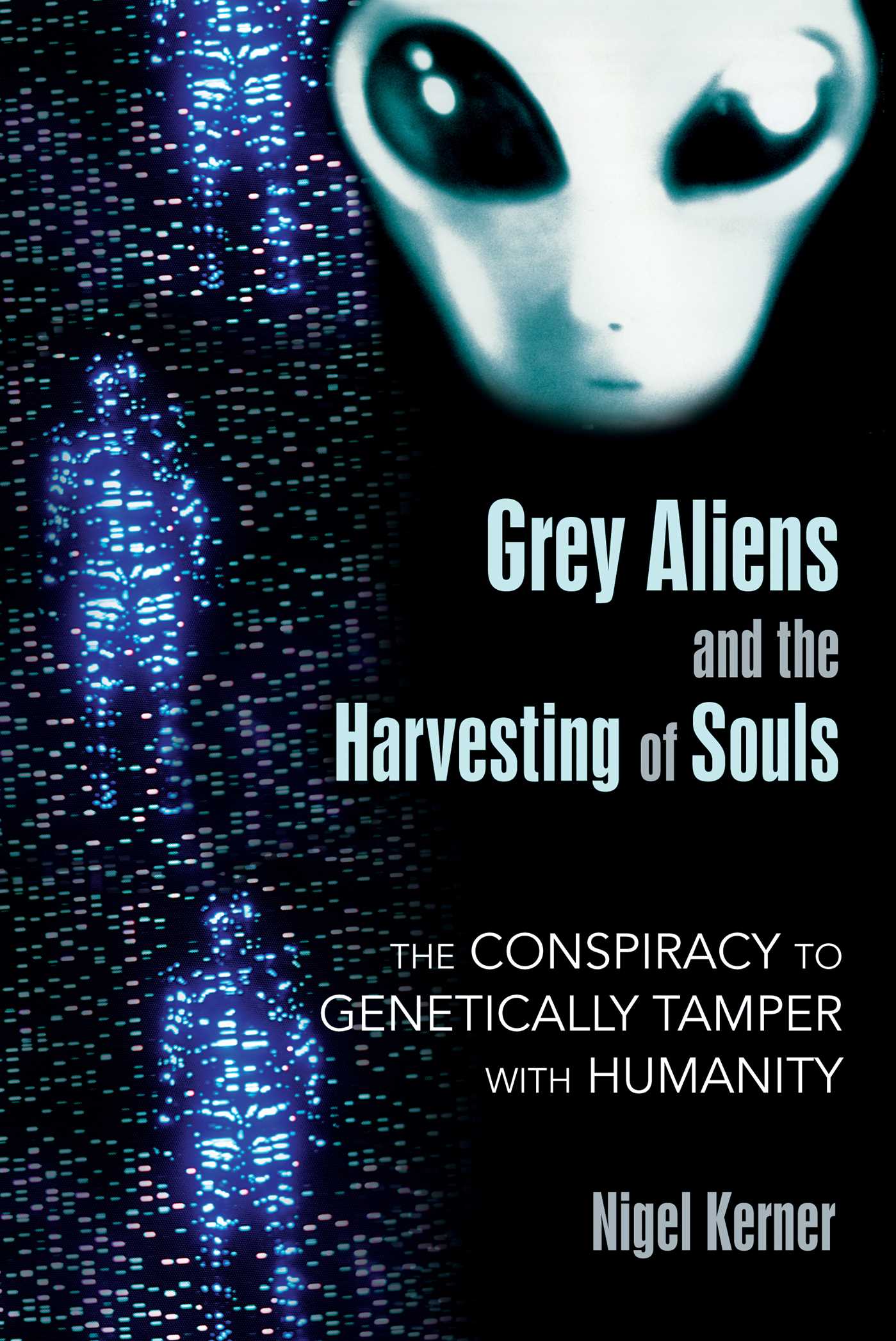 In 1997 Nigel Kerner first introduced the notion of aliens known as Greys coming to Earth, explaining that Greys are sophisticated biological robots created by an extraterrestrial civilization they have long since outlived. In this new book Kerner reveals that the Greys are seeking to master death by obtaining something humans possess that they do not: souls. Through the manipulation of human DNA, these aliens hope to create their own souls and, thereby, escape the entropic grip of the material universe in favor of the timeless realm of spirit.

Kerner explains that genetic manipulation by the Greys has occurred since biblical times and has led to numerous negative qualities that plague humanity, such as violence, greed, and maliciousness. Racism, he contends, was developed by the aliens to prevent their genetic experiments from being compromised by breeding with others outside their influence. Examining historical records, Kerner shows that Jesus, who represented an uncorrupted genetic line, warned his disciples about the threat posed by these alien interlopers, while Hitler, a pure product of this alien intelligence, waged genocide in an attempt to rid Earth of all those untouched by this genetic tampering. Despite the powerful grip the Greys have on humanity, Kerner says that all hope is not lost. Greys exist wholly in the material world, so if we follow the spiritual laws of reincarnation and karma, aiming for enlightenment and rising above the material--a state the Greys are unable to reach--we can free ourselves from their grasp.

By the time the penny finally dropped that the Primes were needed to make new clones it was too late. They grasped, at least in an abstract if not in an empirical sense, the idea that there was a universe outside the atom and understood the holy abstraction we call soul as the all-important direct individual ancestral connection to Godhead itself. More important, they realized that the only way to access this universe in repeat automatic admissions through reincarnation was to possess a soul. They finally perceived in their own way that a soul was an intangible ephemeral bond line to the center of all absolutes. But they had no sense of this absolute whatsoever. They had all the time looked in the wrong way, in the wrong place. They looked for something physical. After all they could never know anything but the physical themselves because they were assembled to do just that. They were totally of the atom themselves, made out of star stuff. Thus the clones got less and less able to successfully replicate themselves on the broader universal scale. Their artificial DNA would eventually and inevitably decay faster than they could control. Fresh new supplies of DNA, or any such equivalent mechanism that stands at the existential base of all life-forms, was vitally necessary.
They then did the same thing the first Primes had done in creating the first-generation clones. They made a mechanism of their own that would minimize their exposure to the universe. They made their own form of clone--a roboid to do this. The vulnerability that defined the difference between the timeless, forceless, all-knowing Primes and the vulnerable artifact clones was in fact the premise that fostered the creation of the next step. The creation of a nonliving, purely synthetic mechanism, a bio-organic machine, a roboid, a halfway house between themselves and a pure machine replicate. These nonliving, pseudo-artificial entities could look after the fragile pseudo-living clones whose very animate state was the reason for their fragility.
As I have said, roboids were actually created as electro-biologically animate artificial entities. A means to venture forth where no naturally devolved living being would be foolish enough to go. A utilitarian means to an expedient end. It all worked for a while. These bio-machines could venture into areas of our universe that they themselves (the clones) had previously paid too heavy a price to go. They were sent out to look for sources of natural DNA from surviving second generation Primes still surviving in the boardwalk of the whole universe--DNA that the clones needed for replenishing themselves so that they could preserve their existential formats.
And so as the forces of entropy took their toll on them to the present day, the clones could replace themselves by recloning themselves and they could in turn remanufacture roboids endlessly. In this way both entities could continue on in time. The clones with their Prime-given artificial intelligence built a means of travel that could conquer space and time past Einstein’s “oars” of relativity and thus the speed of light limit, and they sent the roboids out into the universe by bending and warping Space/Time itself into “wormholes” to find other Primes or their descendants in the farthest reaches of space. The roboids were built exclusively for deep space travel well past the speed of light. Their bodies were specifically built to withstand the huge inertial forces that would affect them when they slowed from these speeds to land on the planets they identified as having living beings. Biological bodies would be torn to pieces under the force of gravity that would come to bear on them when they slowed down. The G forces they would have to withstand would be huge. Thus the utility roboids were a go-anywhere mechanism made from an organic/inorganic amalgam on a silicon and mercury spine. This chemistry could withstand utterly massive G forces in deceleration. They eventually came to our neck of the woods. They came looking for our DNA but also found something we had that was to be more precious to them. They found we were built on a paradigm called soul--a mechanism for endowing a potential eternity through itself, of itself, and by itself. They are here now. Here looking for a way to beg, borrow, or steal an eternity. They had become, and are now, the curse of all soul-bearing life-forms in the universe. They are the Greys seen all too often by abductees.
I have said before that the creators of the first clones (the Prime beings) were of the highest moral and spiritual rectitude. It is because they were of such demeanor that they maintained their marginal, ephemeral state in atoms notwithstanding the loss of their protective mechanism that I have called the “Garden of Eden” margin, or protective bubble. They could never know how to divide or separate anything from its whole state. They were ultimate reason itself. They could never resort to violence because they had no concept of separation or division to know what a violent act might be and thus how to defend themselves. They didn’t defend themselves when the crunch came wherever it might have come in the universe and they were confronted with the ways of the Universe of Parts. They were not capable of negative, subtractive, point-separating modalities and momentums of thought. Not so the clones and their creation the roboids. Their corruption was more pervasive as in their makeup was included the separation paradigm of the physical nonliving universe as they had been exposed to it at its worst levels. If there was a way that surviving Primes could be infected with this paradigm through their aegis or the machinations of their roboid creations, then I think this is where evil entered us. I believe that evil comes from their behests and their behests alone. If this is true then how did it all come to be?

The human skeleton is an ideal aerial for transmitting and receiving the radio wavelength equivalent of the pre-electromagnetic spectrum, i.e., thought. Each individual has a unique “carrier wave pattern,” to which signals are added according to intention, action, and result. The aerial is flexible and movement at the joints provides various alignments that channel the signals and thereby alter the efficiency of transmission and reception.

I don’t believe an apple was literally used to tempt the Primes, but it is a curious fact, and perhaps a clue, that magnetic force fields are in fact shaped exactly like an apple.
Nigel Kerner

Nigel Kerner is a screenwriter, journalist, and author of Grey Aliens and the Harvesting of Souls and The Song of the Greys. He lives in England.

“Nigel Kerner’s shocking new book totally redefines the nature of the alien presence on our planet. In a detailed study that is certain to send shockwaves throughout the world of UFO research, Kerner offers a terrifying theory to explain the presence of the so-called extraterrestrial Greys on our world. Far from being the benevolent visitors that many abductees believe them to be, in reality aliens are cold and clinical creatures whose stark and terrible task is to reap and manipulate our very life force--the human soul--for purposes both nefarious and ominous. A book that should, and must, be read.”

– Nick Redfern, author of Final Events: Alien Abductions, the Government, and the Afterlife

"All in all I can't recommend this book highly enough to the serious minded reader. Scientist or philosopher, if you can hitch up your prejudices for a moment and I for one know how difficult this is, and give this a go, you'll find this book a very interesting read at the very least and one that might inspire you to take these ideas further. It provides not just the most terrifying warning of our predicament as a species, but it also gives us a deeply realistic look at the marvelous alternative that waits those who heed this warning. It's life-transforming stuff."

"Whether you believe Grey aliens exist or not, or don't really care, you'd better sit up and take notice of what Nigel Kerner has to say in his astonishing thesis. A journalist, screenwriter and author (The Song of the Greys), Kerner has a keen intellect and well-honed research skills. In 1997, he set his attention on the Grey aliens phenomenon, interviewing eyewitnesses and abductees and making contact with individuals, many in military or intelligence fields who cannot safely speak out. . . . This longstanding Grey presence cold be the ultimate conspiracy."

"More than twenty years ago, reveals Kerner, his teenage son asked him if UFOs were real. In an attempt to convince his son that it was all a load of nonsense, he began to investigate the subject, but instead found himself adopting the opposite view. . . . While I certainly do not agree with all of Kerner's conclusions, I found his book a delight to read. Kerner has written a stimulating intellectual adventure with a powerful spiritual message for humankind."