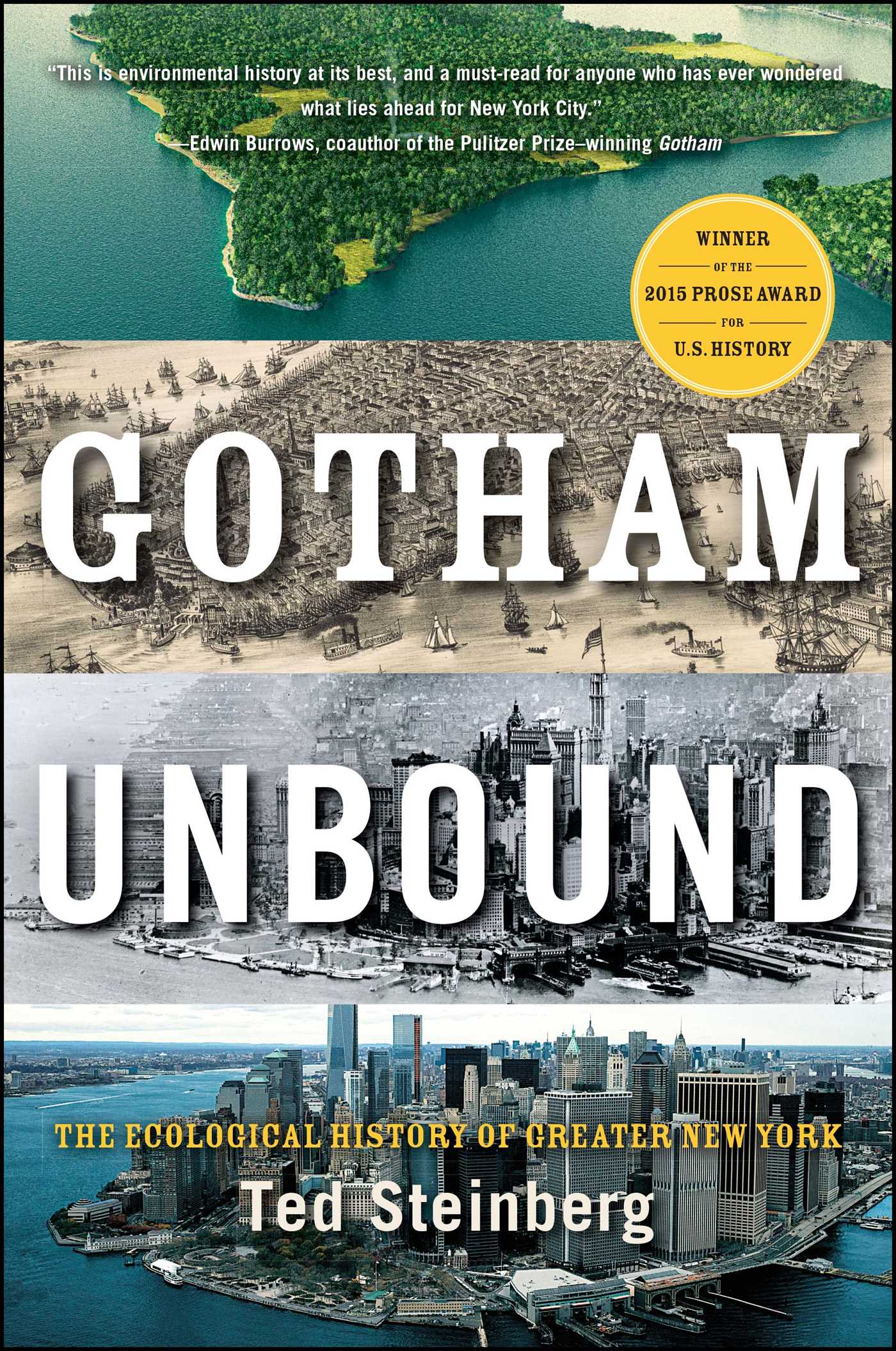 By Ted Steinberg
LIST PRICE $14.99
PRICE MAY VARY BY RETAILER

Winner of the 2015 PROSE Award for US History

A “fascinating, encyclopedic history…of greater New York City through an ecological lens” (Publishers Weekly, starred review)—the sweeping story of one of the most man-made spots on earth.

Gotham Unbound recounts the four-century history of how hundreds of square miles of open marshlands became home to six percent of the nation’s population. Ted Steinberg brings a vanished New York back to vivid, rich life. You will see the metropolitan area anew, not just as a dense urban goliath but as an estuary once home to miles of oyster reefs, wolves, whales, and blueberry bogs. That world gave way to an onslaught managed by thousands, from Governor John Montgomerie, who turned water into land, and John Randel, who imposed a grid on Manhattan, to Robert Moses, Charles Urstadt, Donald Trump, and Michael Bloomberg.

“Weighty and wonderful…Resting on a sturdy foundation of research and imagination, Steinberg’s volume begins with Henry Hudson’s arrival aboard the Half Moon in 1609 and ends with another transformative event—Hurricane Sandy in 2012” (The Plain Dealer, Cleveland). This book is a powerful account of the relentless development that New Yorkers wrought as they plunged headfirst into the floodplain and transformed untold amounts of salt marsh and shellfish beds into a land jam-packed with people, asphalt, and steel, and the reeds and gulls that thrive among them.

With metropolitan areas across the globe on a collision course with rising seas, Gotham Unbound helps explain how one of the most important cities in the world has ended up in such a perilous situation. “Steinberg challenges the conventional arguments that geography is destiny….And he makes the strong case that for all the ecological advantages of urban living, hyperdensity by itself is not necessarily a sound environmental strategy” (The New York Times). 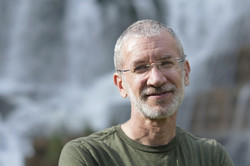 Ted Steinberg is the Adeline Barry Davee Distinguished Professor of History and Professor of Law at Case Western Reserve University. Born in Brooklyn, New York, in 1961, Steinberg has held fellowships from the Michigan Society of Fellows, the Guggenheim Foundation, the National Endowment for the Humanities, the American Council of Learned Societies, and Yale University. He has worked as an environmental historian for twenty-five years and is the author of five other books.

"Steinberg accessibly traces the harbor’s natural history from the booming colonial market in underwater (literally) property and the prescient Manhattan grid plan, both of which fueled development, to the lessons delivered by Hurricane Sandy.... [Steinberg] challenges the conventional arguments that geography is destiny and that New York is an “infinite proposition” — a perpetually renewable resource. And he makes the strong case that for all the ecological advantages of urban living, hyperdensity by itself is not necessarily a sound environmental strategy."

"How did the lush ecosystems of the lower Hudson Valley become one of the world’s premier urban centers, dedicated to the illusion that it could somehow transcend the constraints of the natural world? Ted Steinberg’s explanation in Gotham Unbound is erudite, wise, unfailingly readable—and alarming as hell. This is environmental history at its best, and a must-read for anyone who has ever wondered what lies ahead for New York City."

– Walter LaFeber, winner of the Bancroft Prize and Tisch University Professor Emeritus, Cornell University, and author of The American Age

"This is the best history of an American city I have read—stunningly original, brilliant in research and argument, delightful to read, and vital for our urban future. Whatever New Yorkers may have achieved in the accumulation of wealth or social wellbeing, they have written a tragic story in ecological terms. Henceforth we will not be able to think of the city without also thinking of it as one of the world’s most damaged estuaries and of the teeming diversity of plant and animal life that once lived here."

– Donald Worster, winner of the Bancroft Prize, University of Kansas and Renmin University of China, author of A Passion for Nature: The Life of John Muir

"Gotham Unbound goes deeper than underground history; it is underwater history! Steinberg shows how the development of Manhattan's waterways and lands -- often out of sight -- shaped the creation of today's New York City. He reminds us that unnatural cities stubbornly remain part of the natural world -- and that world has a history. To really understand New York City, leave Wall Street behind, put on your hip-waders, and jump in the bog."

"Steinberg brings to the center of New York's history what nowadays we mostly see only at its edges: the sea breezes and river currents, the creatures that swarm under and the ships that sail over the harbor's waters - waters on which the city's inhabitants have advanced with waste and fill for centuries. Even the trim outlines of Manhattan island represent the boundaries of aggressive settlement, as human New Yorkers, like successful Canutes, have pushed back the tides. Steinberg's story shows how literally the city is the product of ambition and invention, its very shorelines the result of commercial desires. Lively, deeply researched, and well told, a pleasure to read and cogitate upon."

"Ted Steinberg has written a historical masterpiece-- a remarkably original and superbly crafted book about the relentless making and unmaking of the landscape of America’s greatest, most protean city. Gotham Unbound will enlighten anyone who cares about the past and future of New York."

– Michael Kazin, author of American Dreamers: How the Left Changed a Nation and editor, Dissent

"The story of how the wild and woodsy Isle of Manhatta in 1609 became the hyperdense city of today. In the centuries-long war between New York and nature, nature lost virtually every battle—but then suddenly, in 2012, Hurricane Sandy exposed the dangers of denial. Ted Steinberg has written a magnificent book that transforms our understanding not just of New York City but of the future that faces all of us."

"Gotham Unbound is much more than a brilliant book about a great city. I am awed by Ted Steinberg’s ability to make so sprawling a story into a powerful parable about the challenge – and the ultimate folly – of aspiring to limitless growth."

– Adam Rome, author of The Genius of Earth Day: How a 1970 Teach-In Unexpectedly Made the First Green Generation

“Like each of his earlier books, Steinberg's Gotham Unbound is a revelation: in this case of the water world that New York once was and thanks to global warming may yet become again."

– Mike Davis, author of City of Quartz: Excavating the Future in Los Angeles

"The great American city now has a fresh, insightful history that will open readers’ eyes to the ongoing role of nature in an evolving metropolis. It’s a grand account, epic in scope and full of amazing revelations. Give this book to anyone who cares about environmental and urban studies and keep a copy for yourself."

– Clyde A. Milner, author of As Big As the West: The Pioneer Life of Granville Stuart

"Describing an island estuary that became one of the world’s most densely populated cities, this fascinating, encyclopedic history views three centuries of continuous transformation of greater New York City through an ecological lens."

"Steinberg's fascinating and cautionary unnatural history [is] a staggering epic of human will, might, and folly that affirms a crucial truth, “the control of nature is an illusion.”

“[W]eighty and wonderful… Resting on a sturdy foundation of research and imagination, Steinberg's volume begins with Henry Hudson's arrival aboard the Half Moon in 1609 and ends with another transformative event – Hurricane Sandy in 2012.”

By Ted Steinberg
LIST PRICE $14.99
PRICE MAY VARY BY RETAILER