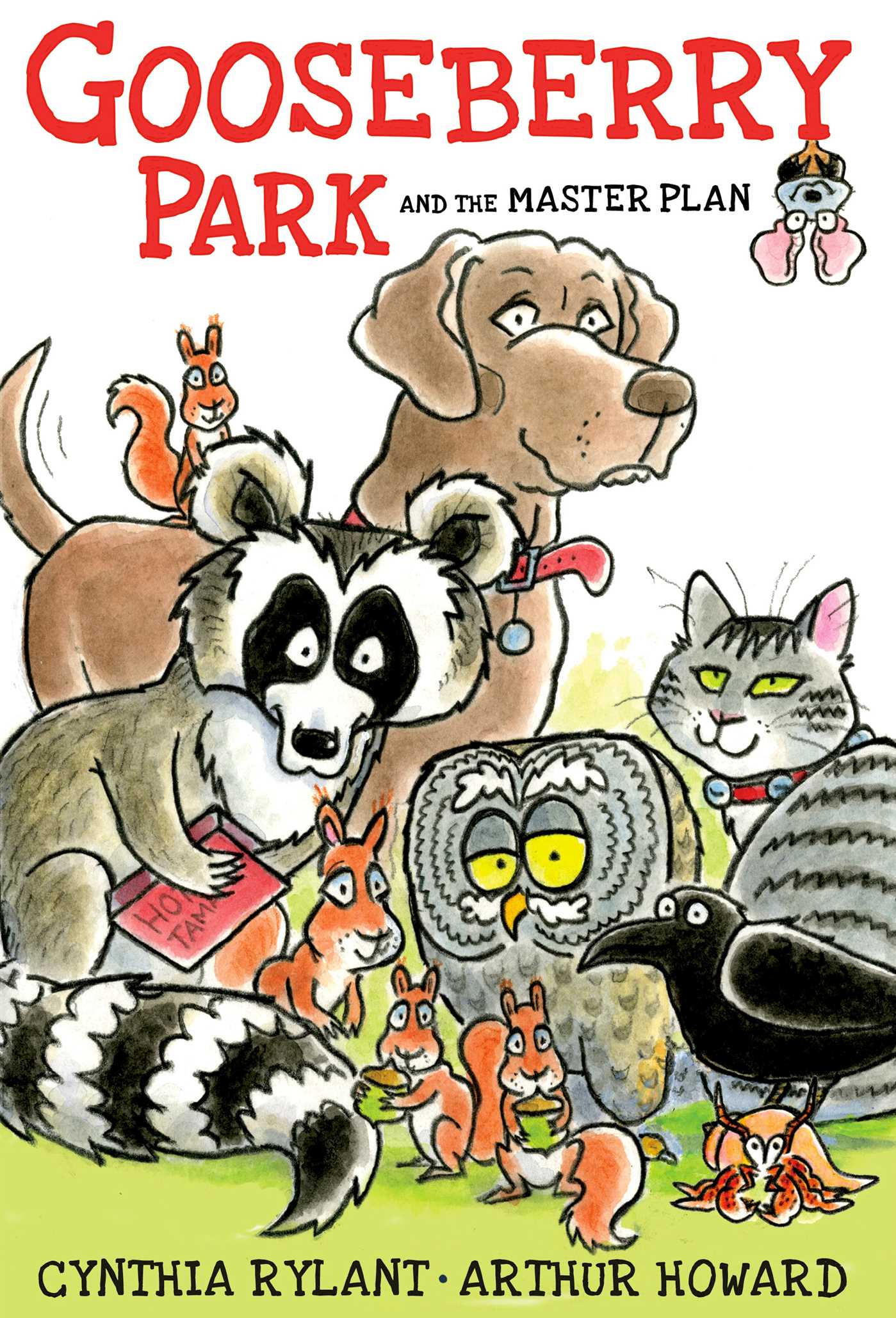 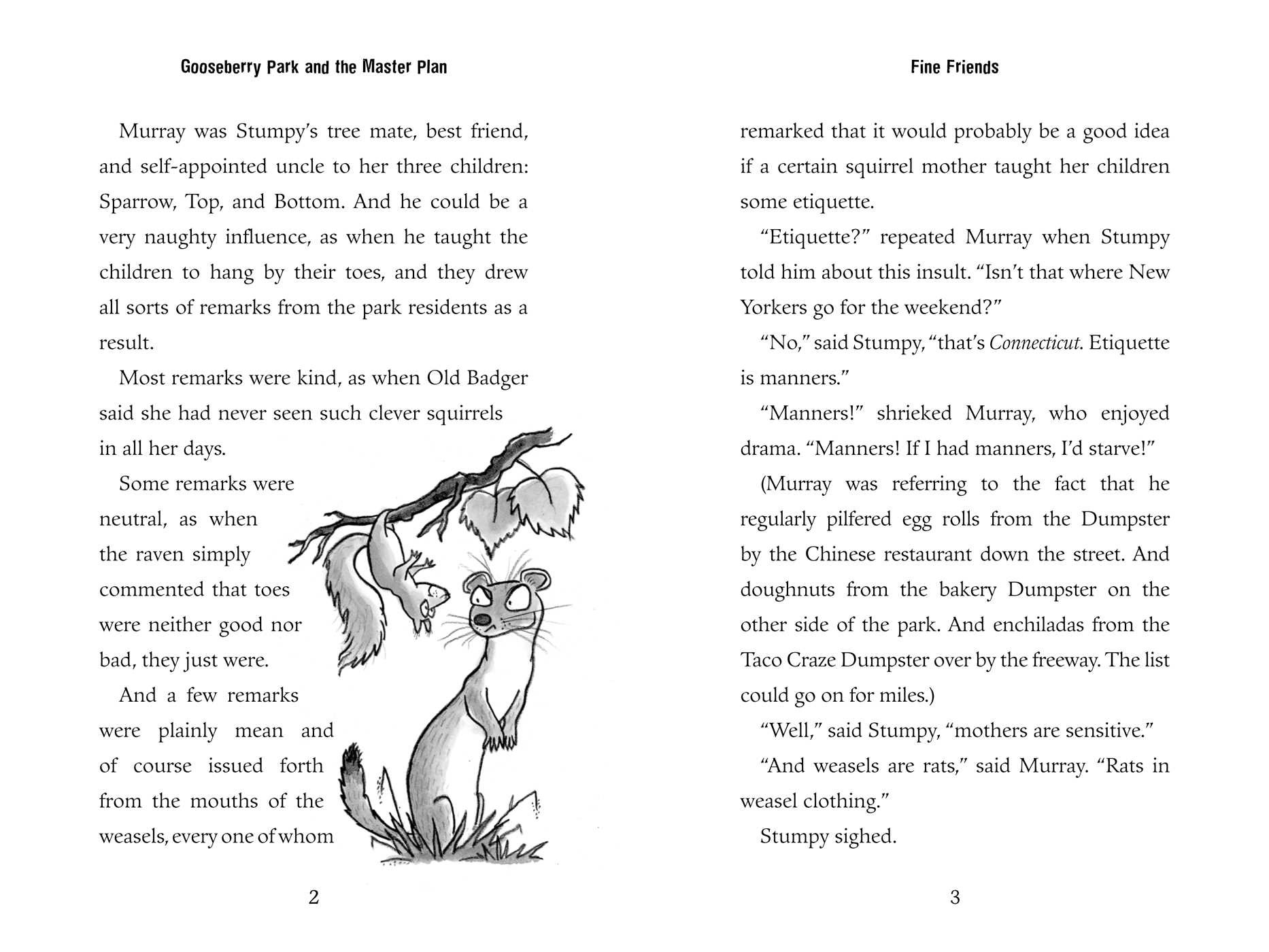 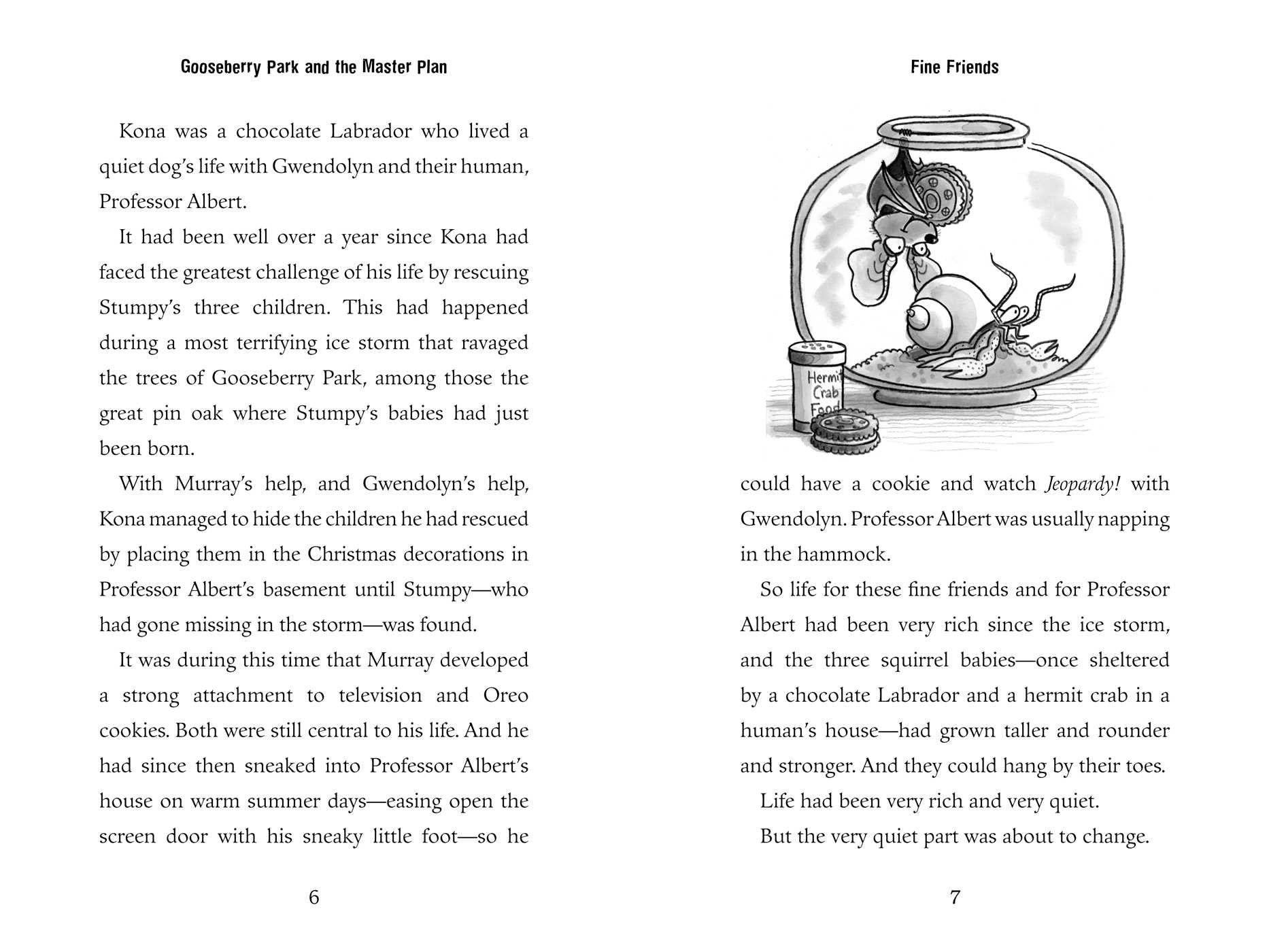 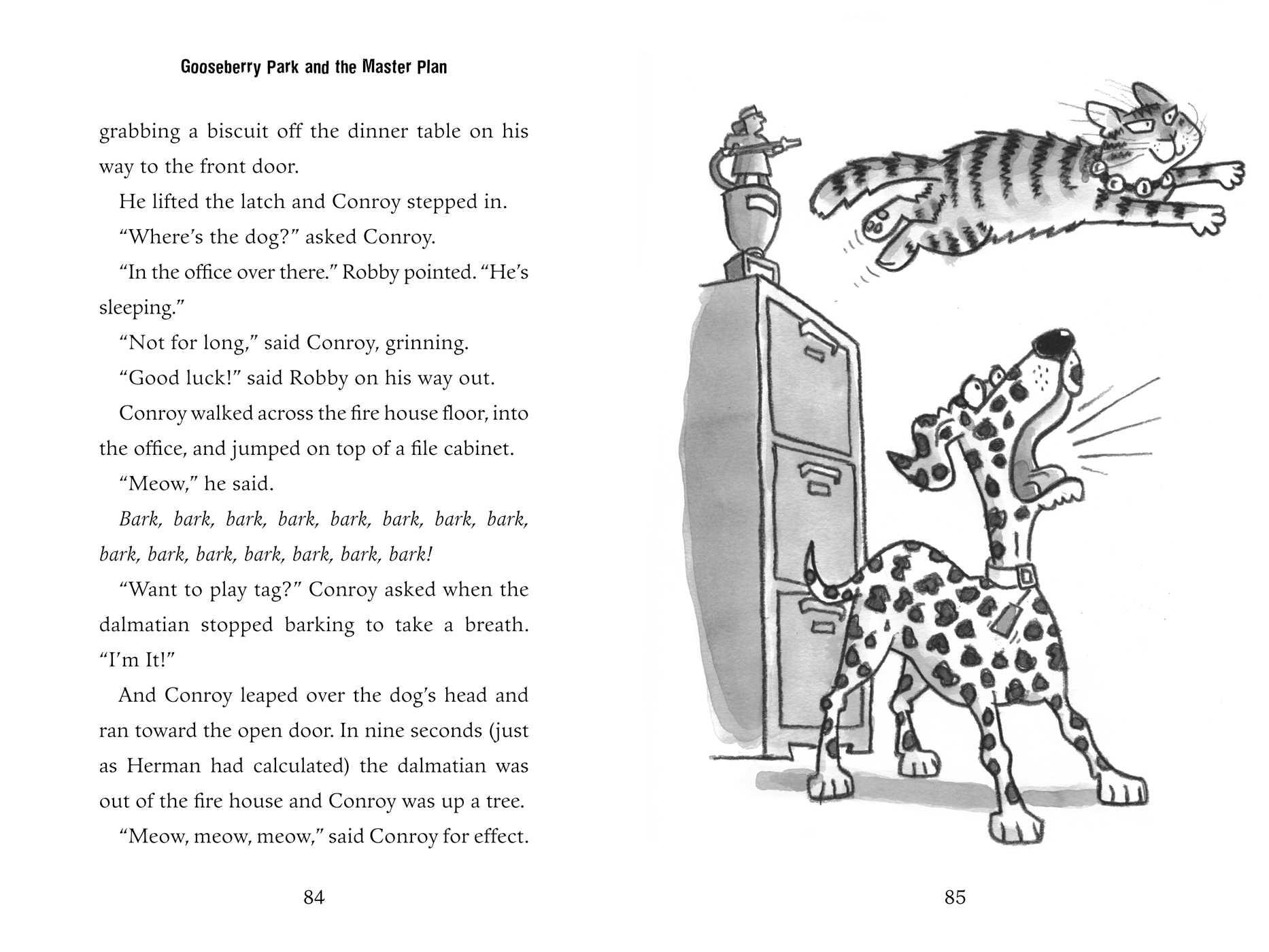 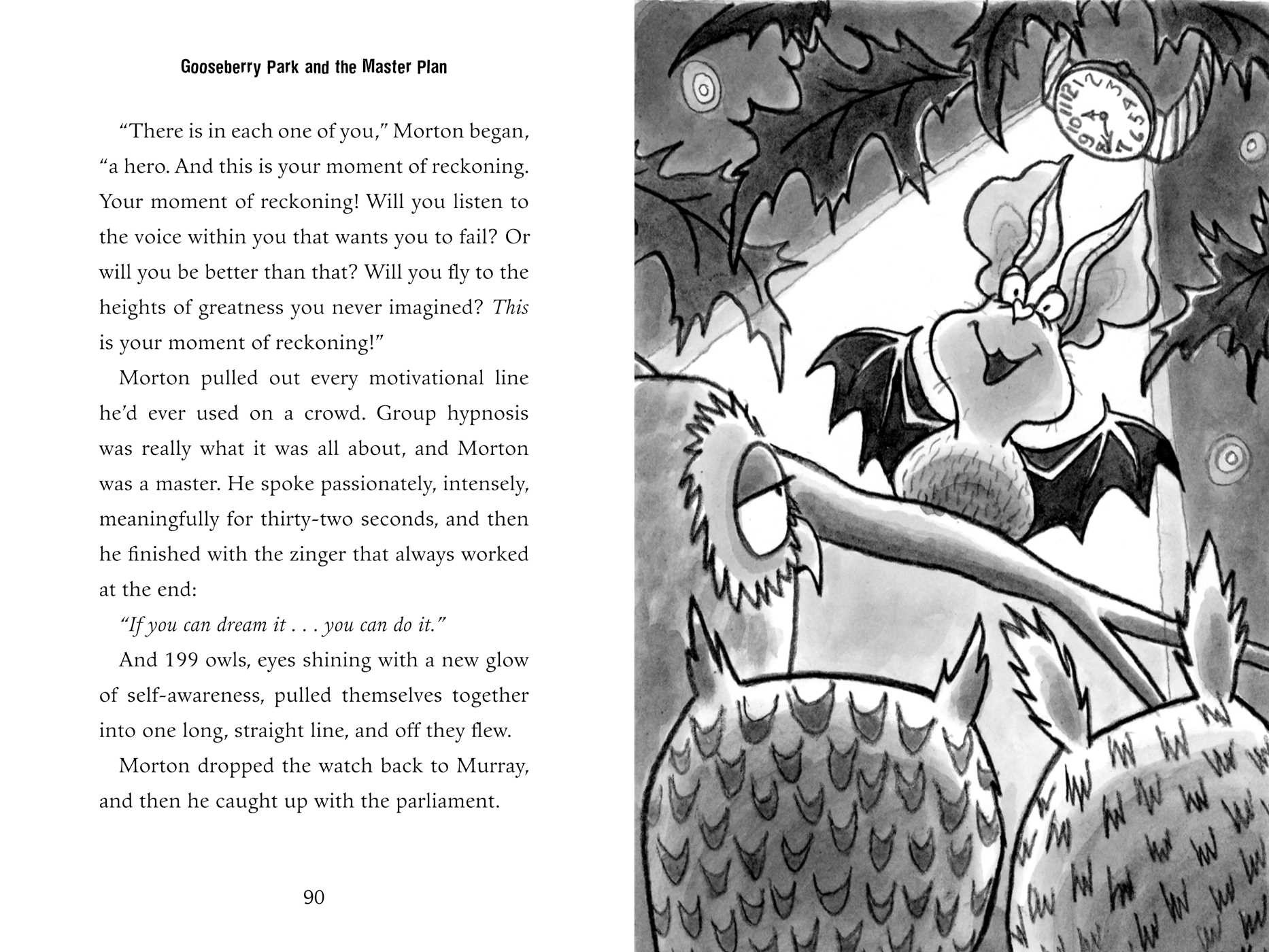 Stumpy the Squirrel and friends team up to save the day in this charming standalone companion to the beloved Gooseberry Park, from Newbery Medalist Cynthia Rylant and illustrator Arthur Howard.

There has been no rain for months, and all of the animals in Gooseberry Park are in danger. Can the gang of dear friends come up with a brilliant solution in time to save the day? Absolutely!

Newbery Medalist Cynthia Rylant’s first novel in more than a decade has all the wit and charm of the first adventure of the Gooseberry Park gang, which Kirkus Reviews called “sophisticated and funny…a tender tale delivered by a sure hand.”

1 Fine Friends
It is not an easy job raising three children, especially if those children seem always to be hanging upside down in a tree.

Such was the life of Stumpy Squirrel, the busiest squirrel mother in all of Gooseberry Park.

It was all Murray’s fault, of course. Bats most naturally hang upside down and are good at it. Murray was a bit of a show-off anyway, so he swung by his toes whenever anyone passing by happened to look up.

Murray was Stumpy’s tree mate, best friend, and self-appointed uncle to her three children: Sparrow, Top, and Bottom. And he could be a very naughty influence, as when he taught the children to hang by their toes, and they drew all sorts of remarks from the park residents as a result.

Most remarks were kind, as when Old Badger said she had never seen such clever squirrels in all her days.

Some remarks were neutral, as when the raven simply commented that toes were neither good nor bad, they just were.

And a few remarks were plainly mean and of course issued forth from the mouths of the weasels, every one of whom remarked that it would probably be a good idea if a certain squirrel mother taught her children some etiquette.

“Etiquette?” repeated Murray when Stumpy told him about this insult. “Isn’t that where New Yorkers go for the weekend?”

“Manners!” shrieked Murray, who enjoyed drama. “Manners! If I had manners, I’d starve!”

(Murray was referring to the fact that he regularly pilfered egg rolls from the Dumpster by the Chinese restaurant down the street. And doughnuts from the bakery Dumpster on the other side of the park. And enchiladas from the Taco Craze Dumpster over by the freeway. The list could go on for miles.)

“And weasels are rats,” said Murray. “Rats in weasel clothing.”

“It’s because she’s a hundred and four years old,” he said.

“Gwendolyn is wise and a hundred and four years old,” said Murray.

“You are counting all her past lives she told us about,” said Stumpy. “In hermit crab time Gwendolyn is just, well, she is just . . .”

“A hundred and four,” said Murray.

Gwendolyn was Stumpy and Murray’s dear, dear friend. They could not imagine how they had ever managed without her. Gwendolyn might be a hermit crab, but she understood each of them perfectly. She gave Stumpy—who was something of a worrier—the very best advice about rearing young children. (Gwendolyn’s advice always solved the problem.) And Gwendolyn praised Murray’s heart, which was actually quite a big heart, but one that Murray hid behind a million funny lines.

Gwendolyn never let her bat friend get away with this.

“You are a shining emblem of love to those children,” Gwendolyn often said to Murray.

But Murray really did hear her. And it made him proud.

The true hero among them all, of course, was the one who said very little about love or courage or wisdom but excelled at all three. And this true hero’s name was Kona.

Kona was a chocolate Labrador who lived a quiet dog’s life with Gwendolyn and their human, Professor Albert.

It had been well over a year since Kona had faced the greatest challenge of his life by rescuing Stumpy’s three children. This had happened during a most terrifying ice storm that ravaged the trees of Gooseberry Park, among those the great pin oak where Stumpy’s babies had just been born.

With Murray’s help, and Gwendolyn’s help, Kona managed to hide the children he had rescued by placing them in the Christmas decorations in Professor Albert’s basement until Stumpy—who had gone missing in the storm—was found.

It was during this time that Murray developed a strong attachment to television and Oreo cookies. Both were still central to his life. And he had since then sneaked into Professor Albert’s house on warm summer days—easing open the screen door with his sneaky little foot—so he could have a cookie and watch Jeopardy! with Gwendolyn. Professor Albert was usually napping in the hammock.

So life for these fine friends and for Professor Albert had been very rich since the ice storm, and the three squirrel babies—once sheltered by a chocolate Labrador and a hermit crab in a human’s house—had grown taller and rounder and stronger. And they could hang by their toes.

Life had been very rich and very quiet.

But the very quiet part was about to change.

Cynthia Rylant is the author of more than 100 books for young people, including the beloved Henry and Mudge, Annie and Snowball, Brownie & Pearl, Motor Mouse, and Mr. Putter & Tabby series. Her novel Missing May received the Newbery Medal. She lives in Lake Oswego, Oregon.

Arthur Howard is the illustrator of Goatilocks and the Three Bears by Erica S. Perl; Noodle & Lou by Liz Garton Scanlon; the Mr. Putter & Tabby series, Gooseberry Park, and Motor Mouse series by Cynthia Rylant; and his own picture books. He has also coauthored and illustrated many books of humor for adults and appeared for seven seasons in the PBS math-oriented production Square One Television. He lives in New York City.

Ten years after the publication of her last novel, Gooseberry Park (1995), Rylant returns with a sequel....Rylant writes with her customary restrained humor, creating with apparently no effort a full cast of three-dimensional furred and feathered characters. The story comes with lessons ranging from the overuse of fossil fuels to the peculiar magic of friendship, all applied with a gentle hand and a spirit of generous trust in the abilities of her readers to understand them. Her frequent collaborator Howard supplies lumpily humorous grayscale illustrations that augment the character development and give readers' eyes places to rest. Readers new to Gooseberry Park will hope they don't have to wait another 10 years for the next book

Twenty years after Gooseberry Park, Rylant and Howard return with a companion book, and it’s well worth the wait. While an ice storm figured prominently in the previous book, a drought is now causing trouble for Stumpy the squirrel, Murray the bat, and other animals in and around the park. Rylant swiftly recaps the events of the earlier book before moving on to the animals’ efforts to secure needed water, using a plan devised by genius crow Herman (it involves 200 owls and a great many drinking straws). Howard’s b&w illustrations build on the story’s ample humor (as when he shows a blissed-out Murray enjoying a Reiki session from Gwendolyn the hermit crab) while Rylant unspools a quietly magical tale of cooperation and kindness, with a gentle environmental undercurrent.

In this follow-up to Gooseberry Park (1995), the animals are living the dream. Murray the bat has a steady supply of Oreos; Gwendolyn the hermit crab periodically cruises around on the back of Kona, the chocolate lab; and Stumpy the squirrel has three bright children, though their habit of emulating Murray by hanging upside down has generated a bit of neighborhood gossip. When a drought hits the park and dries up Gooseberry Creek, however, the animal friends grow concerned for those who cannot journey far afield for water. That’s when they know they need a plan—a master plan. Enlisting a possum, a parliament of owls, and a few others, the park’s animals come together to deliver water to those in need. Veteran children’s author Rylant shows her knack for storytelling by incorporating just the right amount of heart, humor, and suspense into this gentle adventure. Short chapters generously peppered with Howard’s endearing and often amusing illustrations make this a natural step up from beginning readers. A sweet tale of friendship and teamwork.