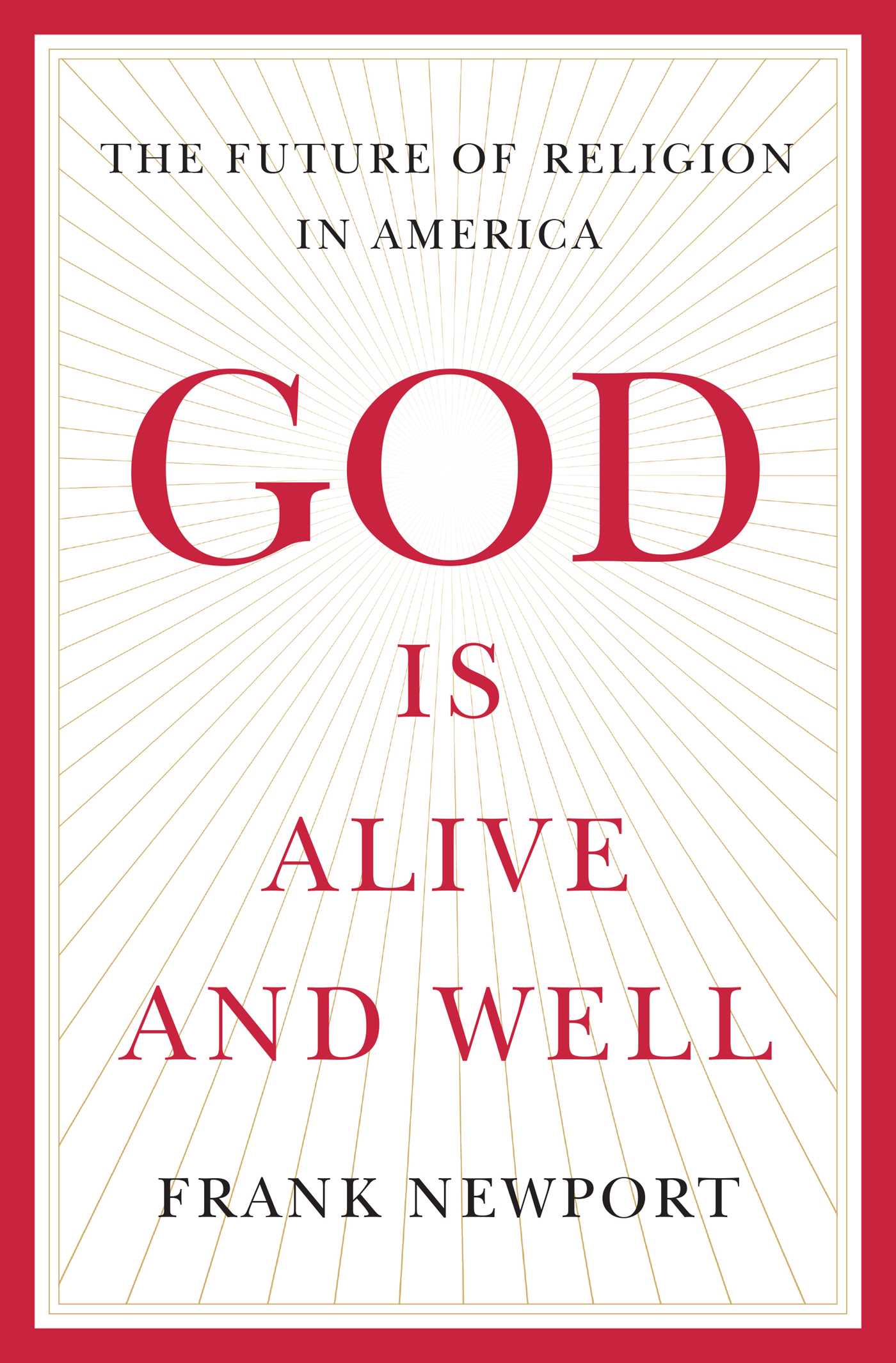 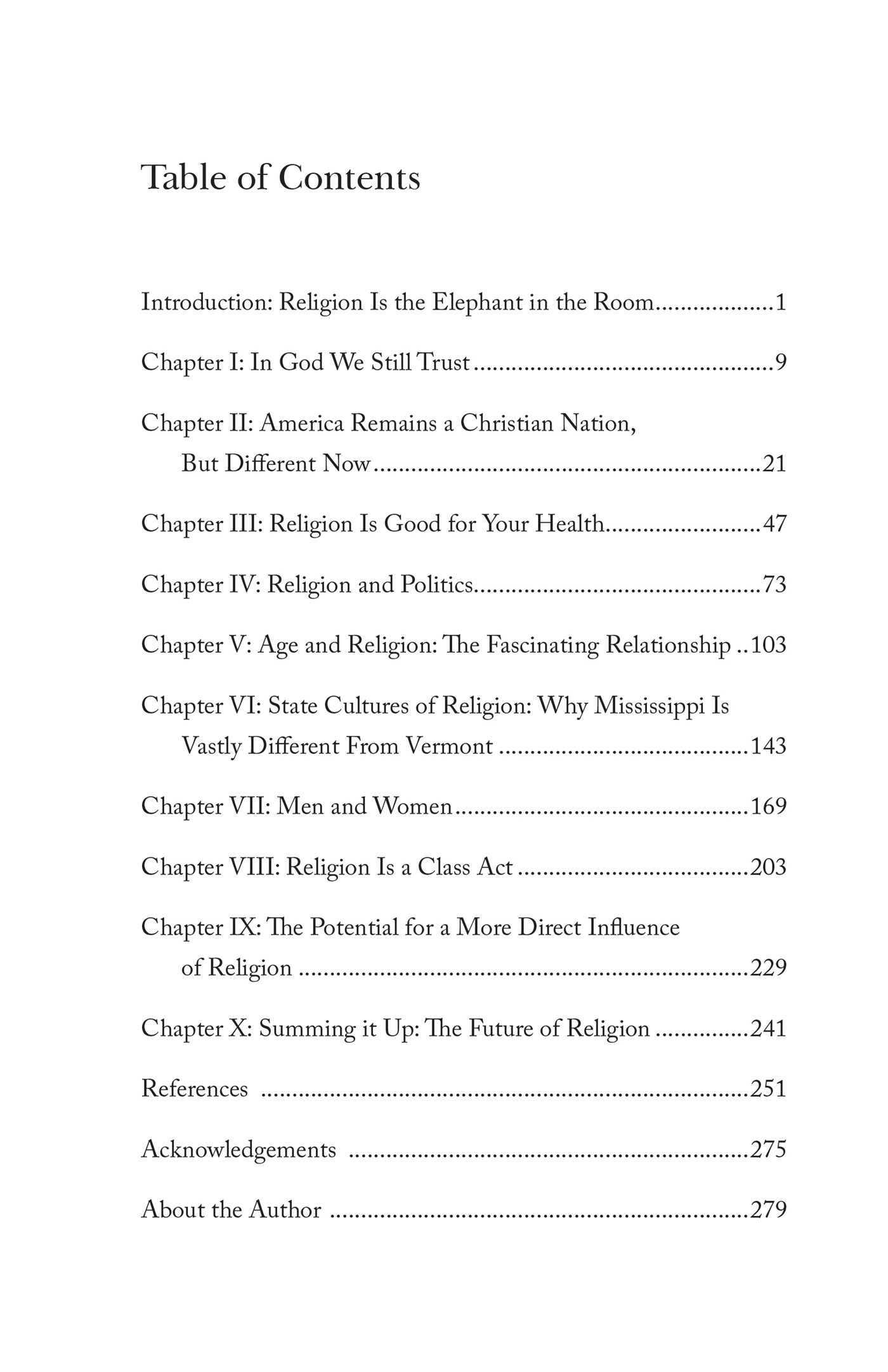 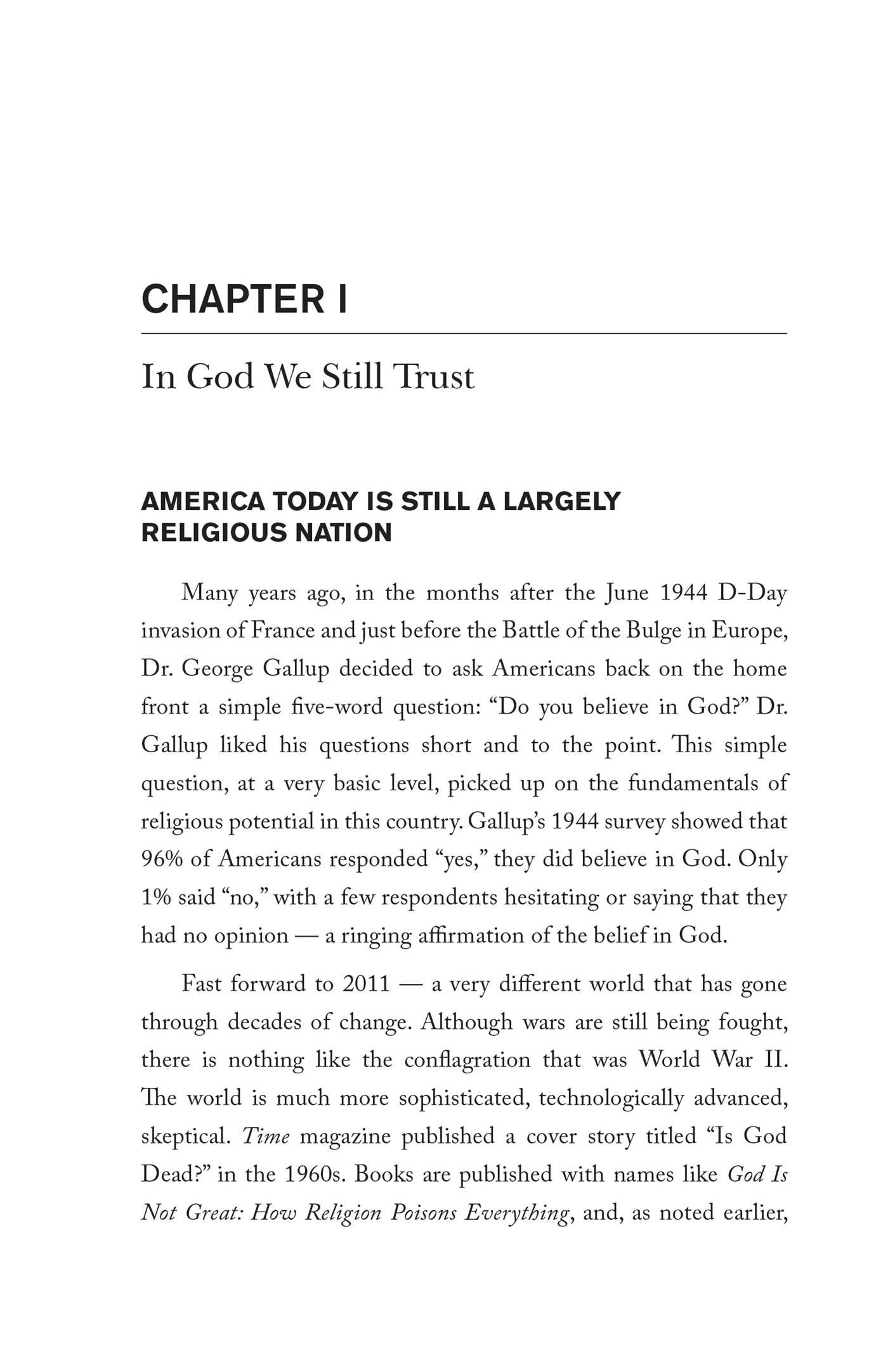 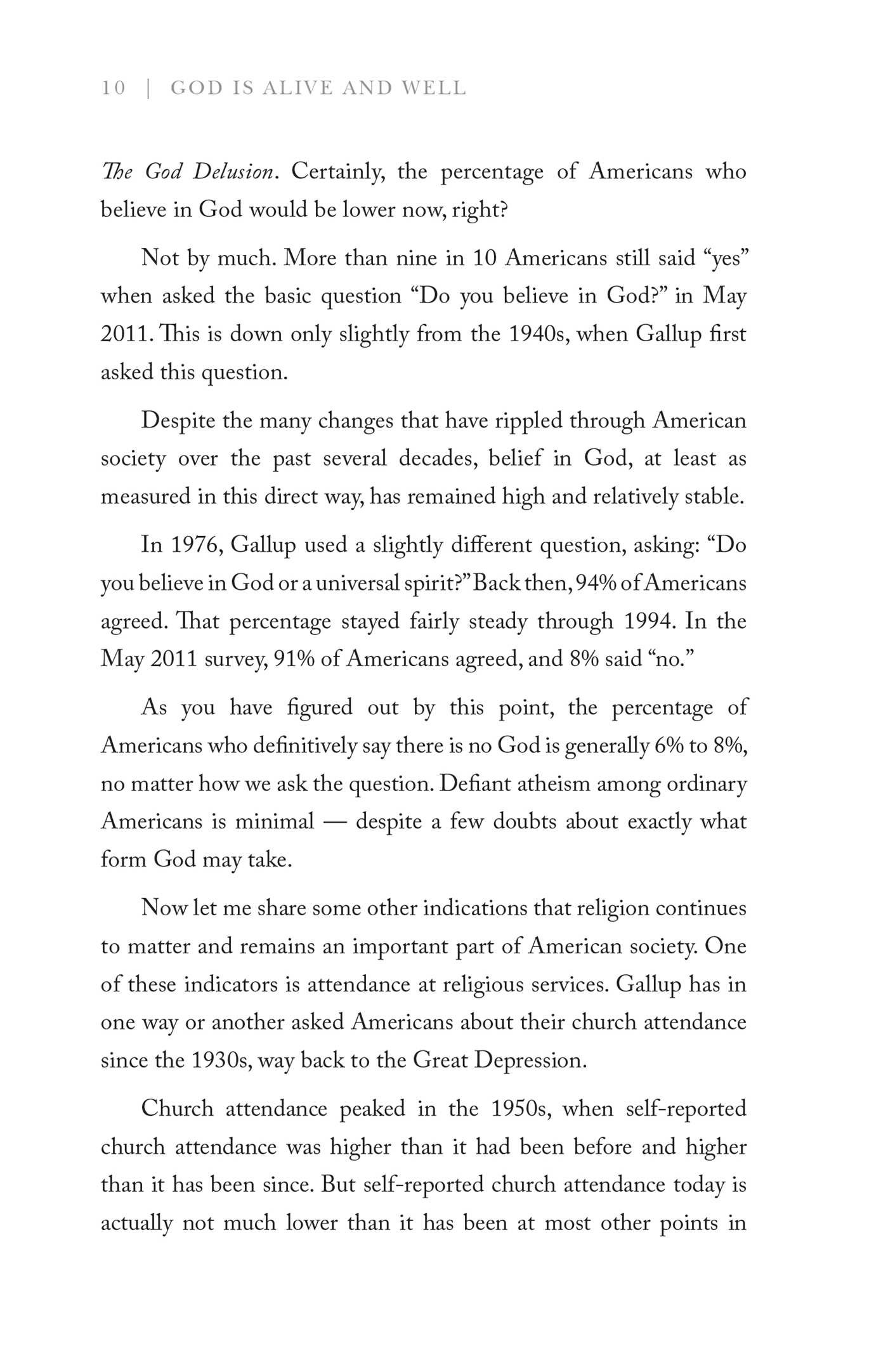 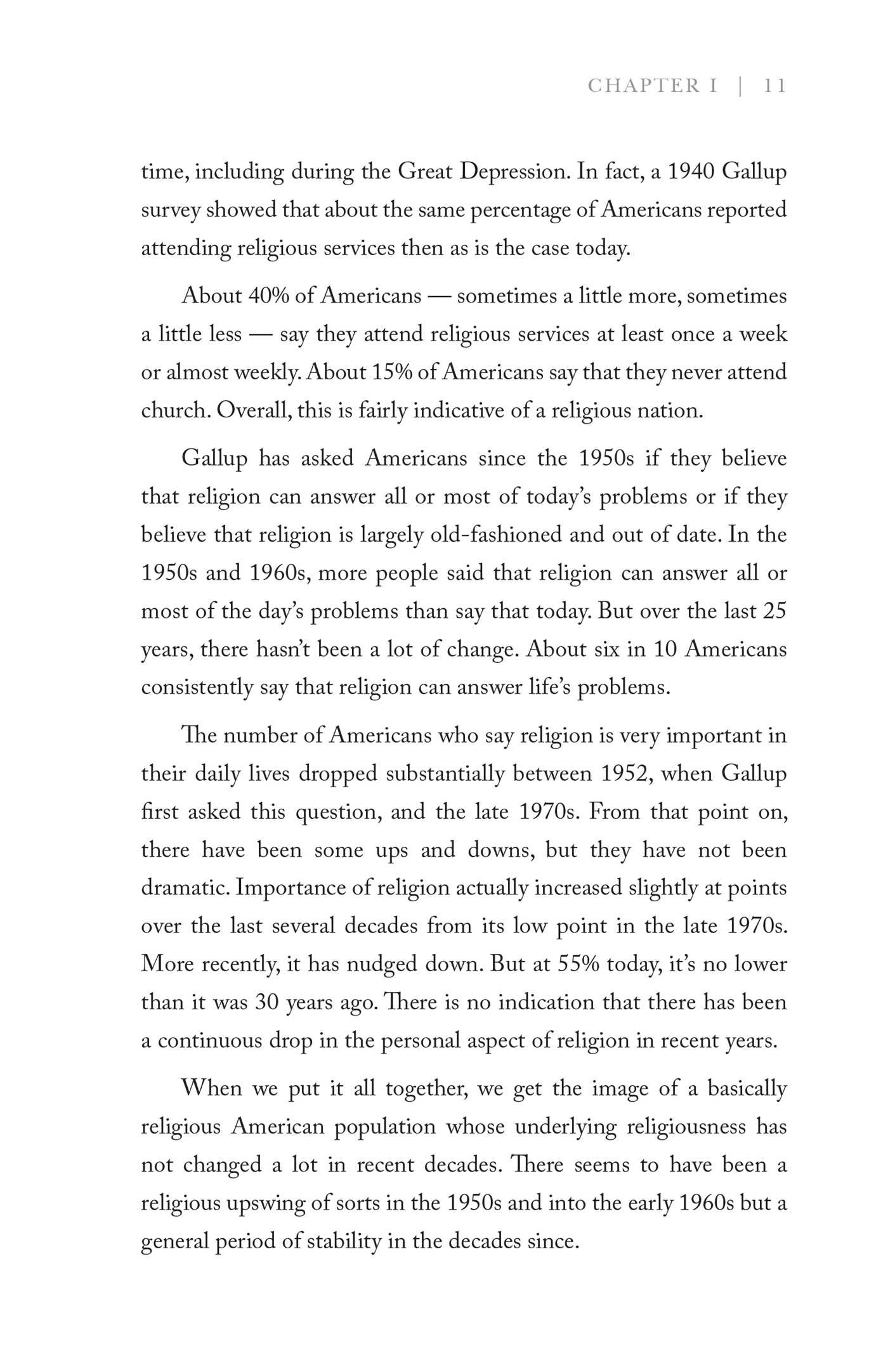 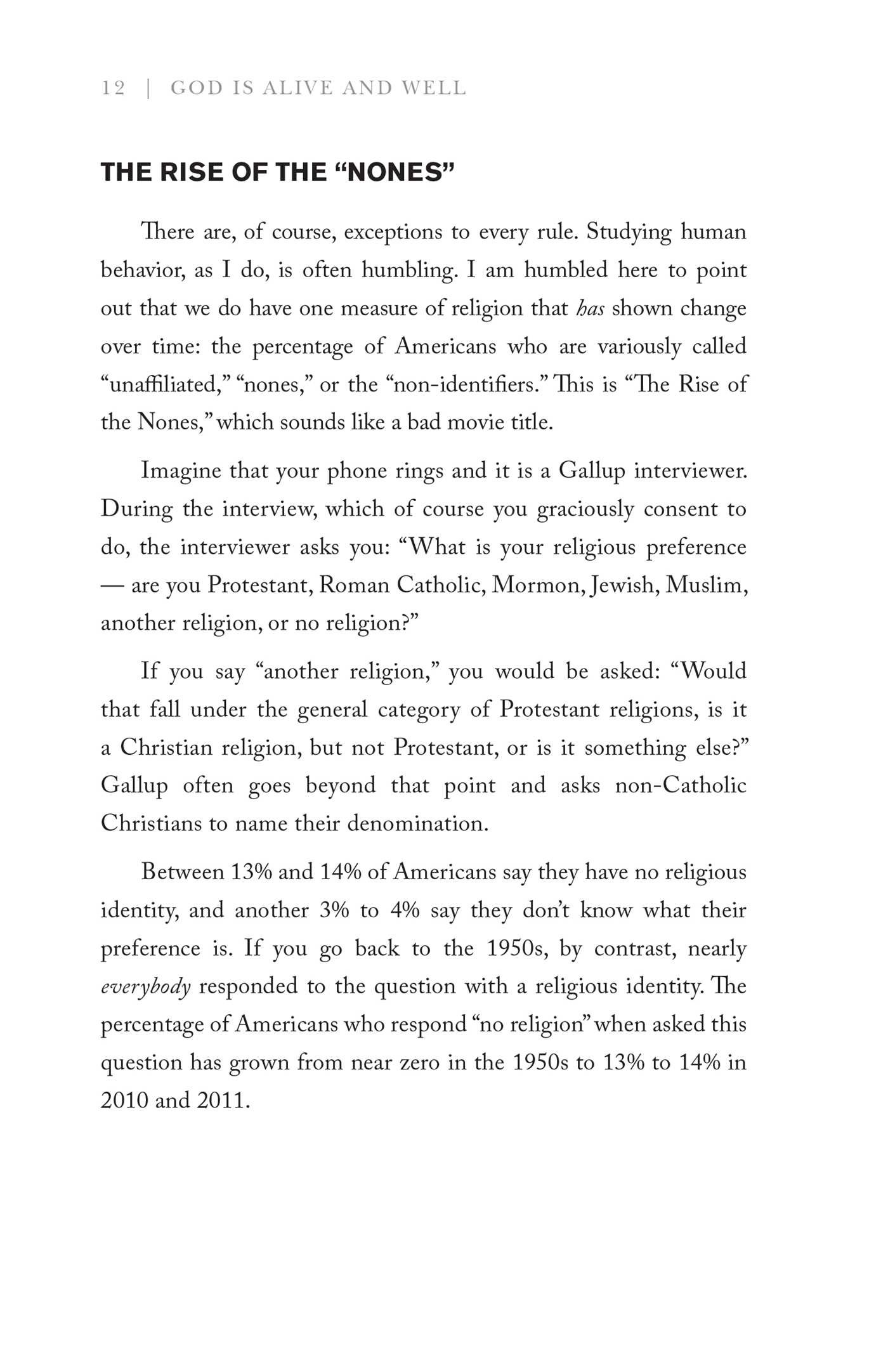 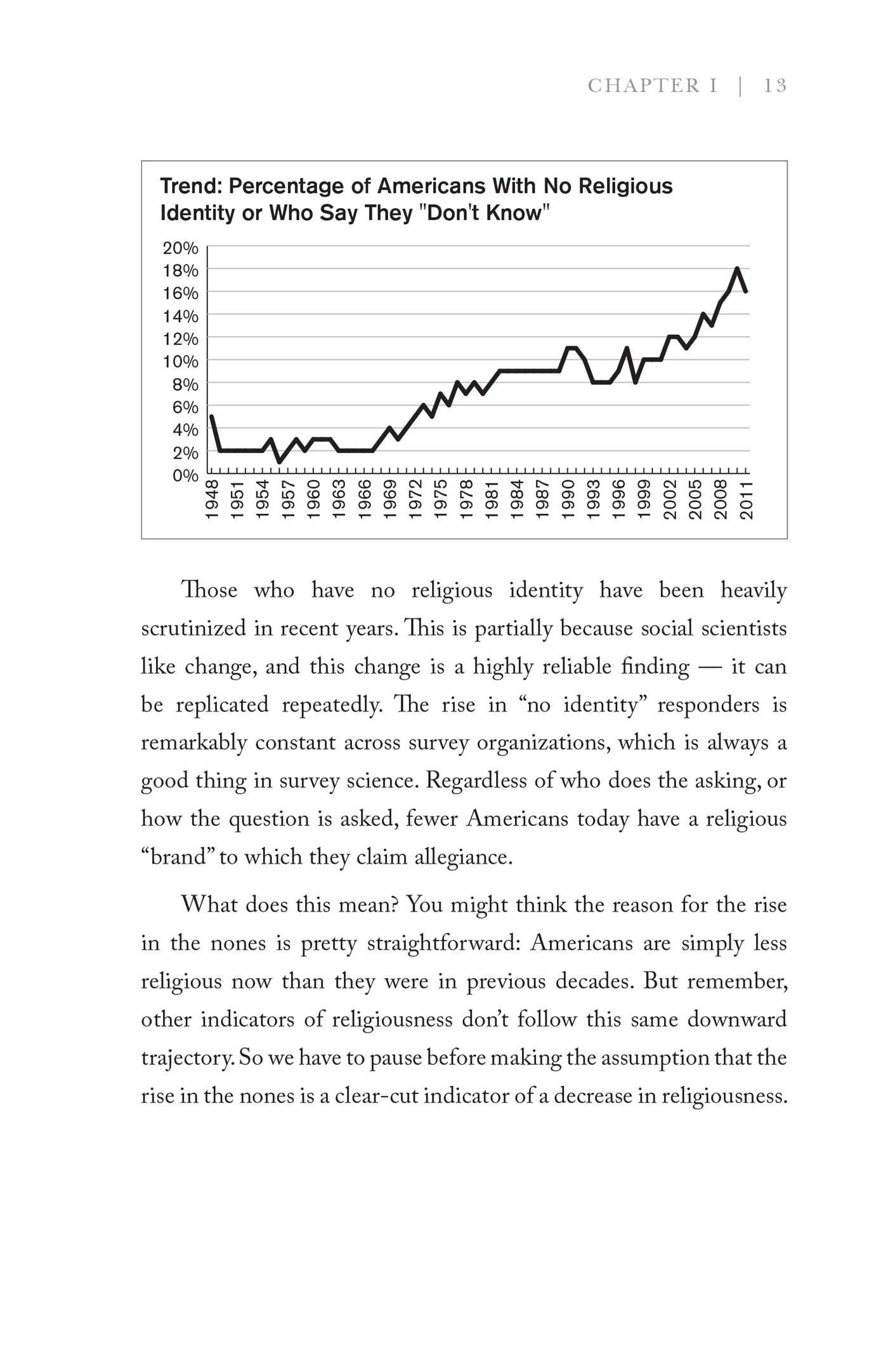 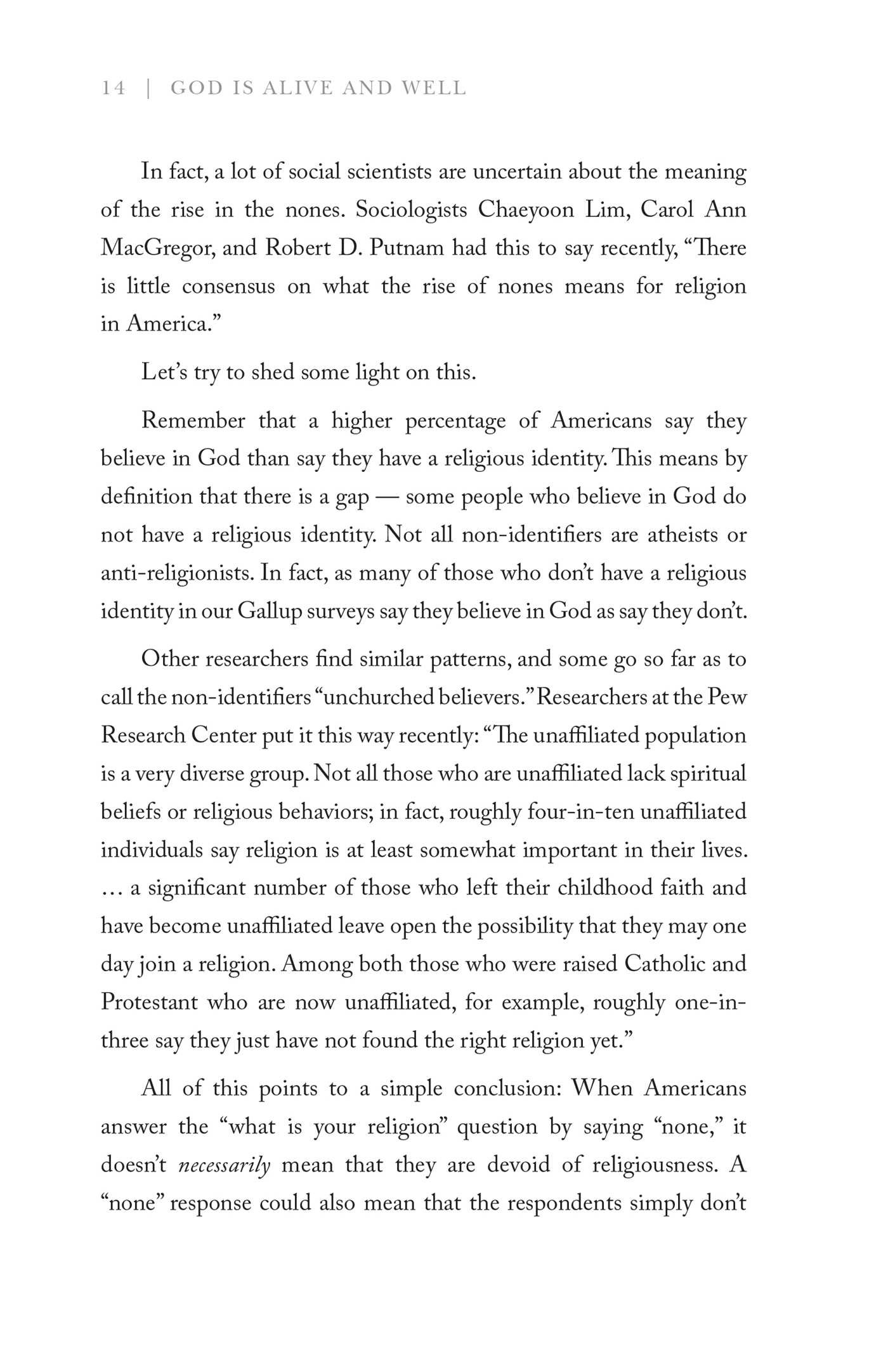 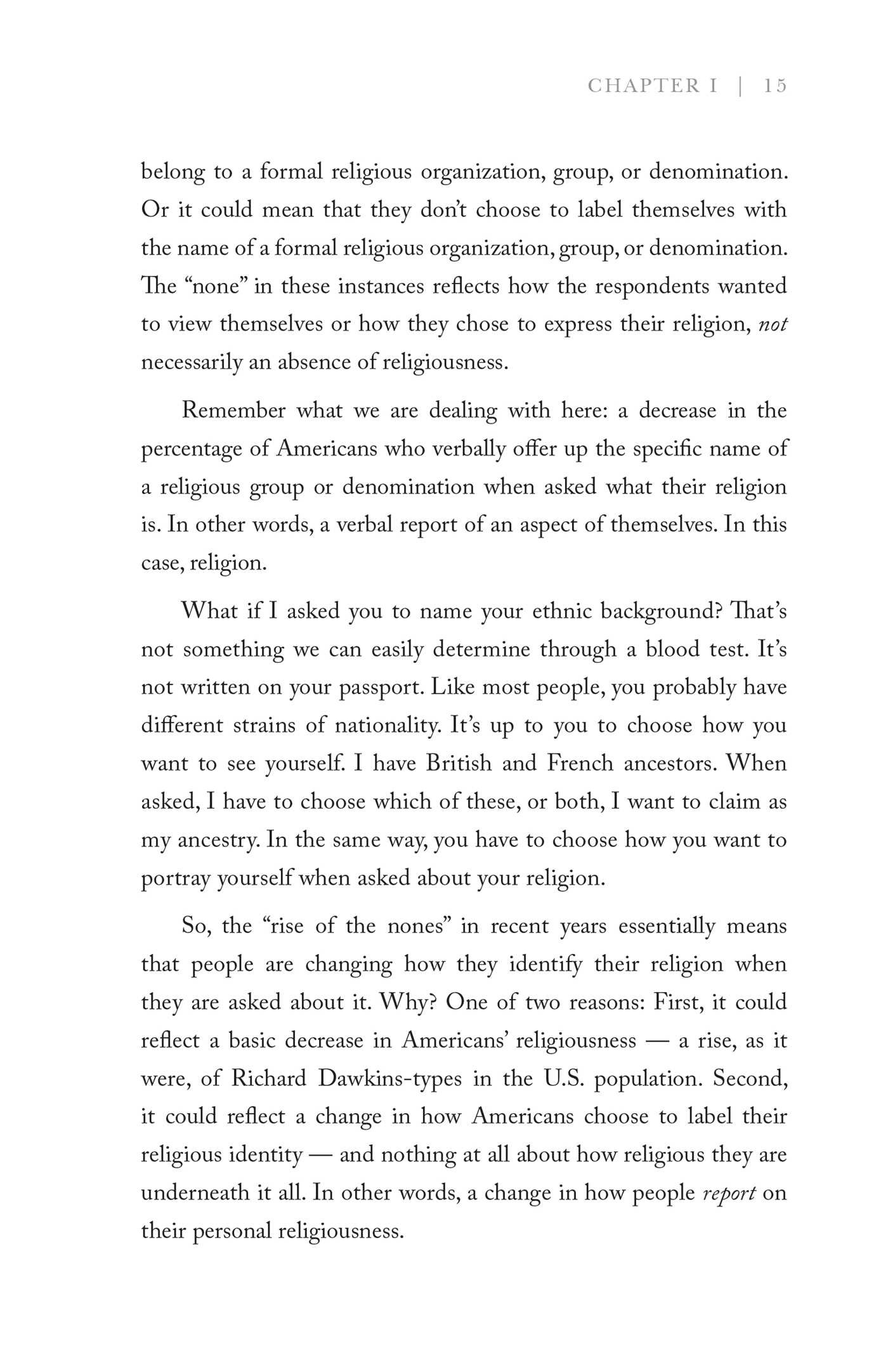 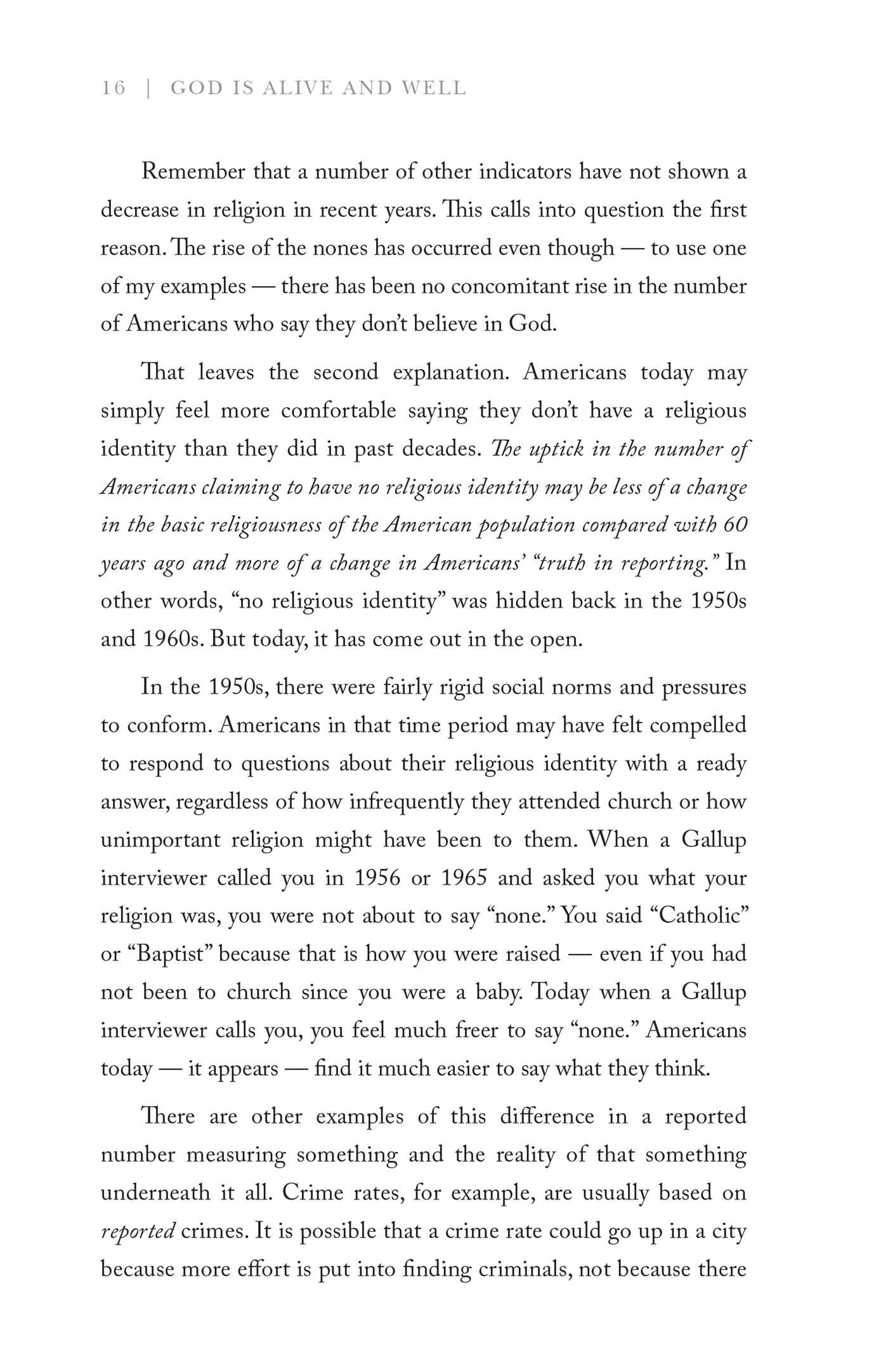 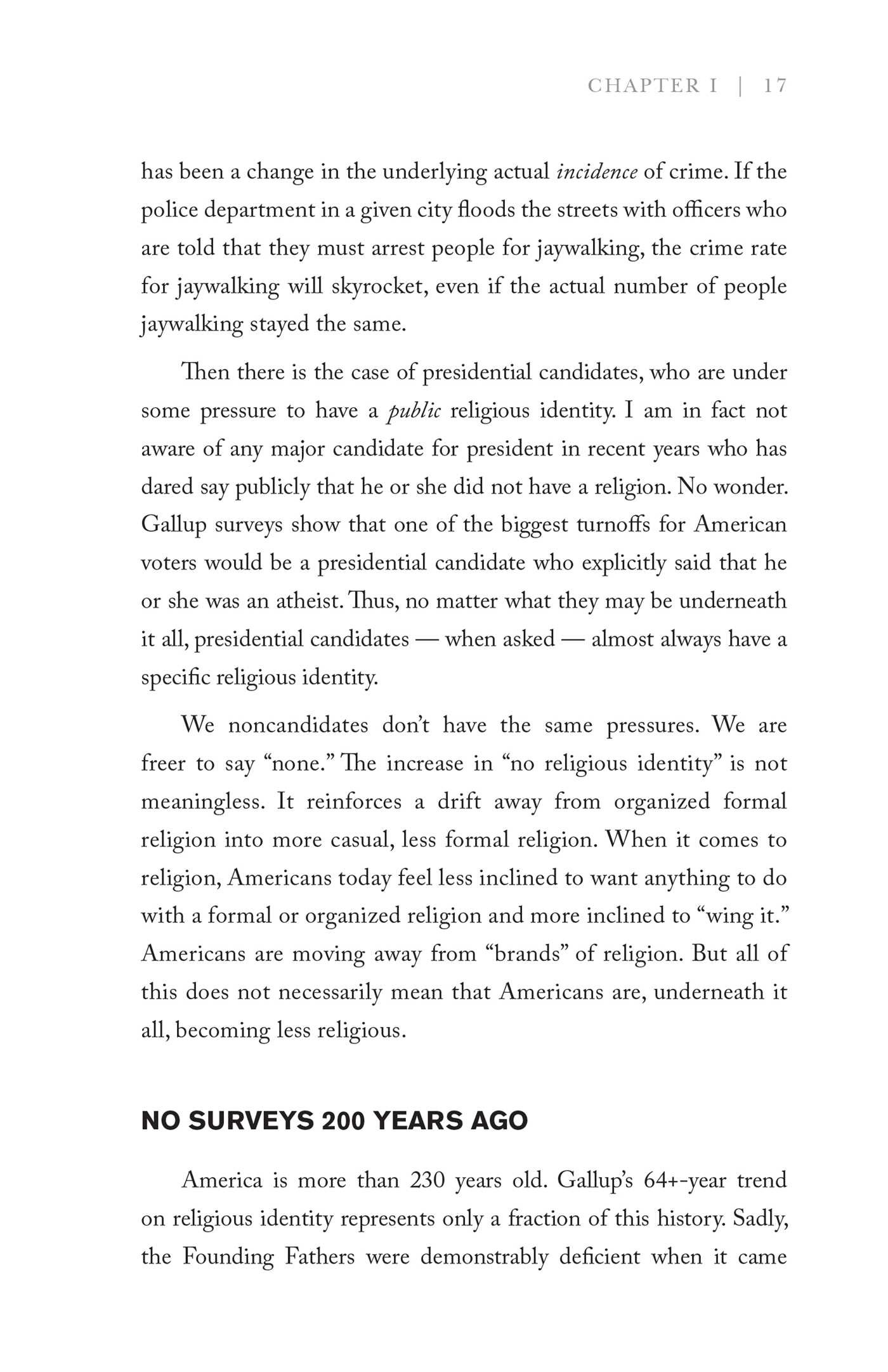 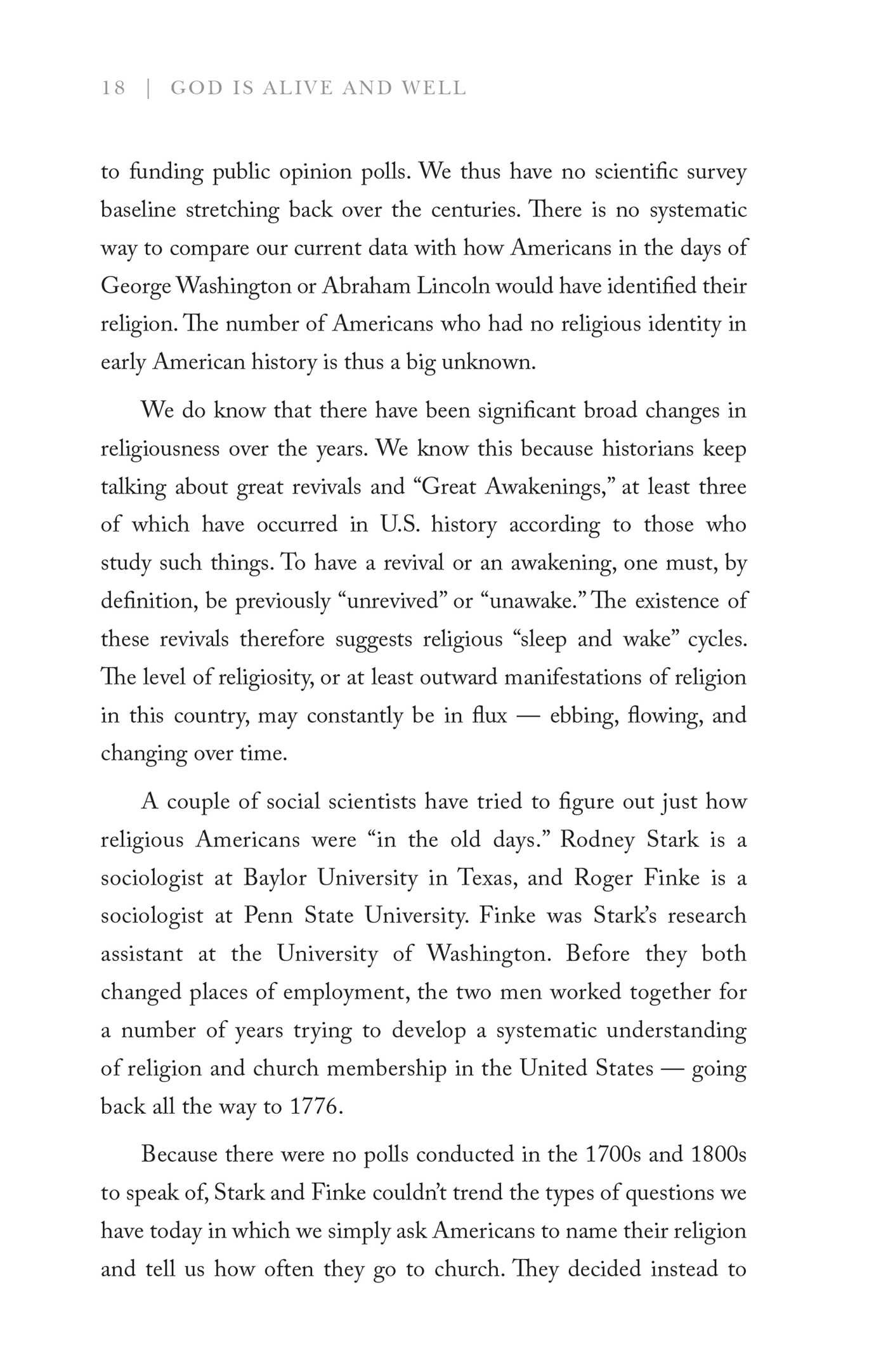 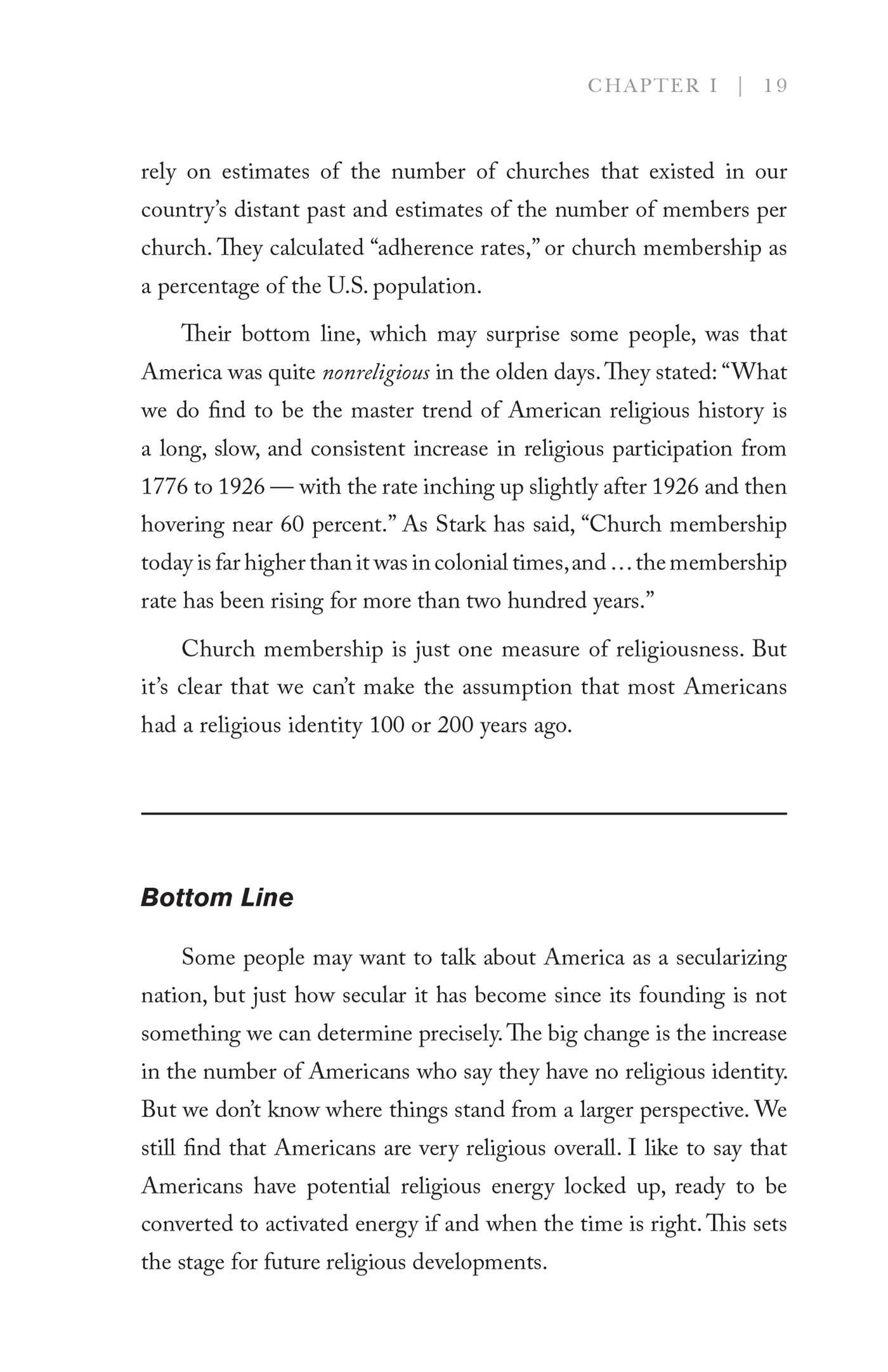 God is Alive and Well

Gallup Editor-in-Chief Frank Newport examines religion in America today, reviews just how powerfully intertwined religion is with every aspect of American society, and explores what appears to be religion’s vibrant future in the U.S. — all based on more than a million interviews conducted by Gallup since 2008.

Popular books such as The God Delusion have dismissed religion as a delusional artifact of evolution and ancient superstitions. But should millions of Americans’ statements of belief and their behavior be dismissed that quickly? The pattern of religious influence in American society suggests mass consequence rather than mass delusion. In God Is Alive and Well, Frank Newport, Gallup’s Editor-in-Chief, provides a new evidence-based analysis of Americans’ religious beliefs and practices — and bold predictions about religion’s future in the U.S.

Most Americans are at least marginally religious, significantly more so than in most developed nations around the world. The majority of Americans believe in God and say that religion is important in their daily lives. And Americans routinely participate in religious rituals.

Levels of religious consciousness are not distributed equally. Systematic patterns of differences in religion occur with surprising regularity. An American’s religiosity is very much bound up with social position and geographic space. There is an important interplay between religion and life status factors — age, gender, marital status, having children — and with achieved status distinctions — class, education, income.

Those who are most religious are demonstrably different across a wide spectrum of outcomes from those who are not. These include lifestyle choices, social participation, ideology, partisanship, and views on political and social issues. Religion can be the driver for highly disruptive social behaviors, up to and including the taking of human life.

Unlike citizens of any other country in the world, Americans group themselves into hundreds of distinct micro religious groups and denominations. These groups are constantly evolving, splitting like amoeba to form new groups. The most common pattern today is the development of the “no name” religious group, consisting of Americans who worship only under the banner of their own nondenominational predilections. These religious groupings are sociologically related to social status, geography, politics, and social and political attitudes.

The emotional, non-negotiable bases of religion and the nature of its appeal to the most ultimate of rationales mean that highly religious Americans are one of the most potentially influential groups in society. Religious beliefs provide a foundation for much of today’s American politics.

America is and will remain a religious nation, and it is entirely possible that in many ways, religion will be more, rather than less, important in the years ahead.

The foundation for God Is Alive and Well is the perspective of science — analyzing what people think, do, and believe about religion. Frank Newport’s distinction as a well-known social scientist and authority on American life, his media experience, and his unique personal history as the son of a Southern Baptist theologian will increase this book’s sales potential.

Written for lay readers using a conversational tone, God Is Alive and Well presents new information with an entertaining style.

Frank Newport, Gallup Editor-in-Chief and one of the nation’s leading public opinion analysts, has spent the major part of his working life studying public opinion — much of that opinion about religion. Newport earned a Ph.D. in sociology from the University of Michigan and has worked as a college professor, as a partner in a market research firm, and as Gallup’s chief pollster for more than 20 years. He is the former president of the American Association for Public Opinion Research. The son of a Southern Baptist theologian, Newport grew up in that tradition in Texas and graduated from Baylor University. Newport’s religious background and his current role as a neutral social scientist give him a unique ability to probe the reality of religion in the United States today.

God is Alive and Well