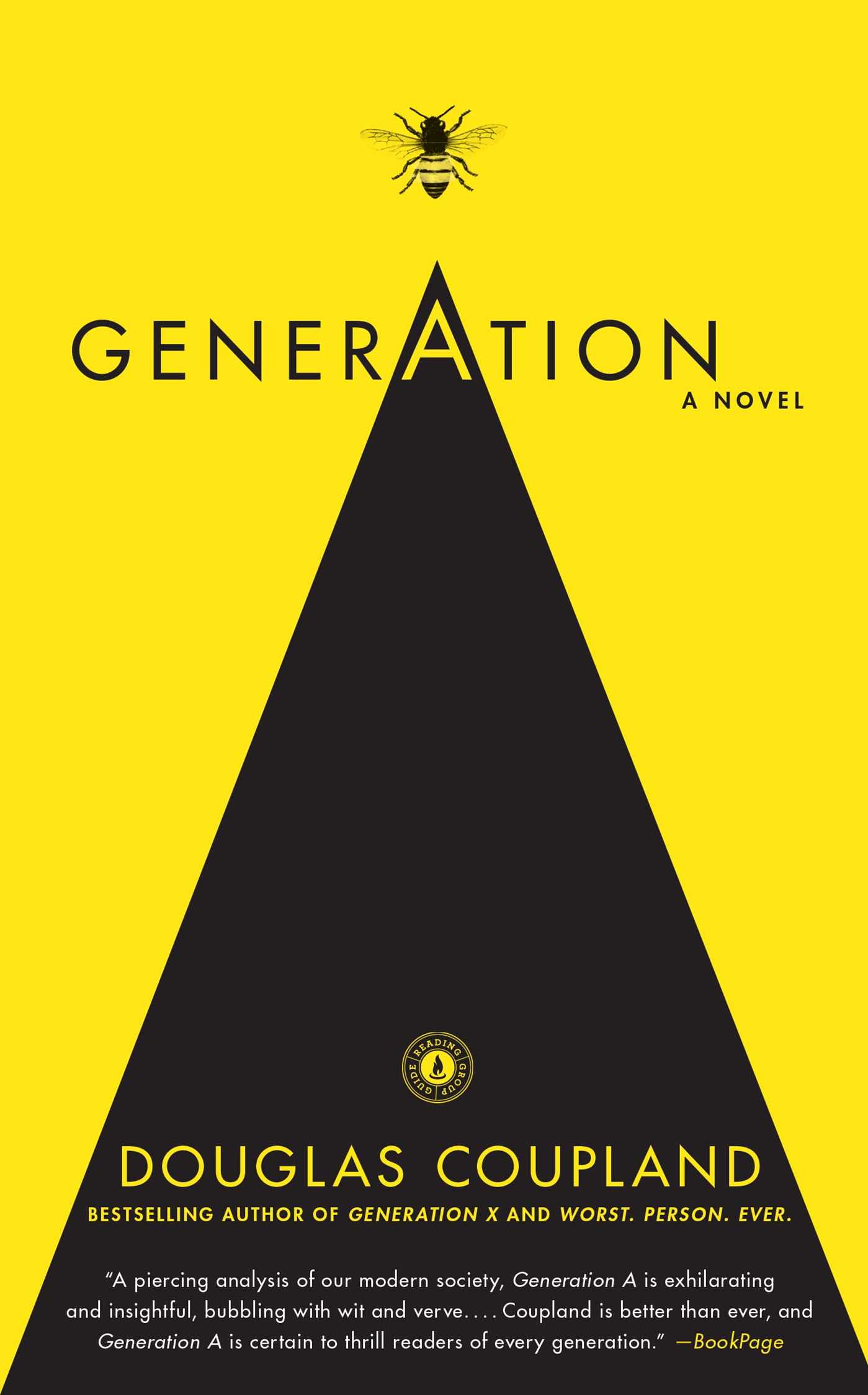 By Douglas Coupland
LIST PRICE $12.99
PRICE MAY VARY BY RETAILER

Generation A is set in the near future in a world where bees are extinct, until five unconnected people all around the world— in the United States, Canada, France, New Zealand, and Sri Lanka—are all stung. Their shared experience unites them in ways they never could have imagined.

Generation A mirrors Coupland’s debut novel, 1991’s Generation X. It explores new ways of storytelling in a digital world. Like much of Coupland’s writing, it occupies the perplexing hinterland between optimism about the future and everyday apocalyptic paranoia. Imaginative, inventive, and fantastically entertaining, Generation A is his most ambitious work to date.

By clicking 'Sign me up' I acknowledge that I have read and agree to the privacy policy and terms of use. Free ebook offer available to NEW US subscribers only. Offer redeemable at Simon & Schuster's ebook fulfillment partner. Must redeem within 90 days. See full terms and conditions and this month's choices.
This reading group guide for Generation A includes an introduction, discussion questions, ideas for enhancing your book club, and a Q&A with author Douglas Coupland. The suggested questions are intended to help your reading group find new and interesting angles and topics for your discussion. We hope that these ideas will enrich your conversation and increase your enjoyment of the book.

In the not-too-distant future, the world has become addicted to digital communication and time-warping drugs.  Isolation and disconnection have rushed in with the “advancements” of the 21st century as people are incessantly pummeled with massive amounts of data.  And, most notably of all, bees are extinct—that is, until five unconnected people from around the globe are all stung.

Abducted by government officials in hazmat suits, these five seemingly disparate individuals undergo a rigorous month of isolation, bloodletting, and bizarre scientific experiments, somehow ending up together on a remote island with a dubious scientist and nothing to share but off-the-cuff stories.

Douglas Coupland revives the narrative format of his renowned Generation X, and crafts a simultaneously humorous and haunting portrait of what the future might bring—ushering in the age of Generation A.

1. Whose perspective/narrative did you enjoy most? (Harj, Zack, Samantha, Julien, or Diana).  Was there a particular character that you couldn’t wait to hear talk again?  Or did their stories truly merge into a singularity by story’s end?
2. In Samantha’s story, The End of the Golden Age of Telephones, she states, “Mother Nature always makes sure that everyone has a role to play in the world” (p. 239).  What did you see as the ultimate role of the five characters stung by bees?  Did they save the world?  Did they really put an end to Solon?

3. Do you see the world of Generation A as a possible (and imminent) future?  Consider the extinction of bees, the mass-addiction to a designer drug, and the heavy reliance on satellite and digital communication.

4. Whose campfire story did you enjoy most?

5. Discuss the similarities that start to appear in their stories.  Consider the ideas that begin to pop up in every participant’s fictions:  royalty, isolation, language’s loss of meaning, the Channel Three News Team, etc.

6. How did you react to Louise’s arrival on the island?  Do you believe what she said about Serge’s intentions?

7. Did you ultimately understand why each person was stung--and how they were related to Solon?  Discuss the notion of neuroproteins and the chemical release involved in the group’s storytelling.

8. Is the power of fiction the only thing that saved the group?  Can telling stories really detach us from the digital era, and as Harj suggests, “turn the world back into a book?” (p. 297)

9. Was “Trevor’s” tale an autobiographical one?  Did you believe a word that came out of Serge’s mouth?

10. Reread the book’s epigraph.  Are we in the era of Generation X or Generation A?

1. Read Douglas Coupland’s seminal novel Generation X, and discuss his approach to storytelling and what each book says about the power of fiction.

2. Attempt your own campfire scenario with some friends.  See what kind of stories you can come up with.  Do the tales begin to resemble each other?

3. Submit yourself to any number of modern digital networking methods (Start a vlog, play a game of World of Warcraft, attempt an Earth sandwich).  How do these activities compare to reading and telling stories?

4. Create your own “neutrality chamber” and see how long you can last before feeling too stifled.  Whose voice would you choose to speak to?

5. Visit iTunes and watch Douglas Coupland’s Generation A question and answer series, where he discusses everything from the importance of bees to the most evil letter in the alphabet.

A Conversation with Douglas Coupland


Is Solon based off of a particular real-world designer drug?

No. IT’s a theoretical “what if” kind of drug.

Is there a medication you feel that numbs people in a similar fashion?

Solon doesn’t numb you. It simply makes you stop ovethtinking your near future while giving your head the cool clean sense of accomplishment you get after reading many books at a go.

How do you feel about the proliferation of anti-depressants/stress relievers/sedatives?

I think Americans are weirdly puritanistic about psychopharmaceuticals. There are millions of people out there who would otherwise be dead or rocking by themselves in a corner who now lead full and normal lives because of amazing and wonderful scientific advances. I do have major problems with the way the US medical system has monetized these (amd most drugs) to extract as much money out of consumers as they can.  I think Americans would be horrified if they saw that they pay ten times as much for goods and services the entire rest of the planet gets cheaply and easily.


What was your process for crafting this story?

Books arrive in my head all at once and then it becomes an 18-month process of getting it all down on paper.


Did you write sequentially, or did you treat one character at a time?

Always sequentially. And I never go back and remove chunks or move them around. There’s something abut that I find untrue.


You utilize a number of drastically different narrative voices throughout the novel – was it difficult to change tones and perspectives within the same book?

No. Characters in a book are very much like personalities divvied up within a family. In the end it all averages out to a sort of overall averageness.

Did you ever find yourself slipping from one character into another?

Never. I’m sitting here trying to think how that would be possible and can’t do so. I’m curious to hear what other writers say on the subject.


There is a large amount of scientific data in the book—namely, the idea of neuro-proteins and the secretion of chemicals from cells.

Yes, but most of it echoes things we’re all familiar with in 2009 …Mad cow, H1N1 …it’s amazing how scientific most of us have become without realizing it.

Did you have to do research for the book, or is this something you’re familiar with?

I’ve got a definite scientific thread in my personality, but I think most people do, and don’t realize it.

Do you believe in the possibilities of synthetic biology?

Who would you choose as your voice if you were in an isolation chamber?

Which character did you most enjoy writing?


Can fiction save the world from ecological disaster?

I don’t think any art form can, but in concert with other forms, a new sensibility can be createdm and that will, in turn, cause change.


How do you feel about eBooks and eReaders?

I haven’t yet seen one.  They’re not as common as media stories would have us believe. I’m curious to see one.

As a sort of combination of the shared story and the mass-produced digital networking device, what are your thoughts of the future of literature on a screen?

TV didn’t kill radio, it just added something new to the mix. Same with ereaders, I think.


Do you think people, stranded on an island and forced to create stories, would actually begin to blend their tales into a singular fiction?

I think you made a misreading here. Their tales don’t merge, but from within the 15 stories told, common themese subconsciously emerge, and from these themes the reader becomes a stargazer, looking into the stories trying to find hidden constellations within.

The melting together process is something that occurs later on, after they’ve told their stories.

Would you ever write in a similar format to Generation A or Generation X again?

Only time will tell. I never really know what the next book will be until it presents itself to me, often at the strangest moments.


What drew you to this particular narrative style?

It’s pretty much the style I prefer, although I’d like to go to third person omniscient again soon.

Are you working on another novel?

Yes, it’s for something called “The Massey Lectures” which is a Canadian annual publication (check Wikipedia).
Douglas Coupland

Douglas Coupland is Canadian, born on a Canadian Air Force base near Baden-Baden, Germany, in 1961. In 1965 his family moved to Vancouver, Canada, where he continues to live and work. Coupland has studied art and design in Vancouver, Canada, Milan, Italy and Sapporo, Japan. His first novel, Generation X, was published in March of 1991. Since then he has published eleven novels and several non-fiction books in 35 languages and most countries on earth. He has written and performed for the Royal Shakespeare Company in Stratford, England, and in 2001 resumed his practice as a visual artist, with exhibitions in spaces in North America, Europe, and Asia. 2006 marks the premiere of the feature film Everything's Gone Green, his first story written specifically for the screen and not adapted from any previous work. A TV series (13 one-hour episodes) based on his novel, "jPod" premiered on the CBC in January, 2008.

“A piercing analysis of our modern society, Generation A is exhilarating and insightful, bubbling with wit and verve…. Coupland is better than ever, and Generation A is certain to thrill readers of every generation.” —Bookpage

“Coupland is one of the few serious writers who seems to be living entirely in the present moment, or perhaps even a little ahead of it.” —Financial Times

“An intoxicating cocktail of literary influences…Coupland [is] a joy to read…A globally ambitious novel, and all the better for it.” —Guardian

“Highly recommended. Like Murakami in thriller-trope mode. Go for it.” —William Gibson

By Douglas Coupland
LIST PRICE $12.99
PRICE MAY VARY BY RETAILER