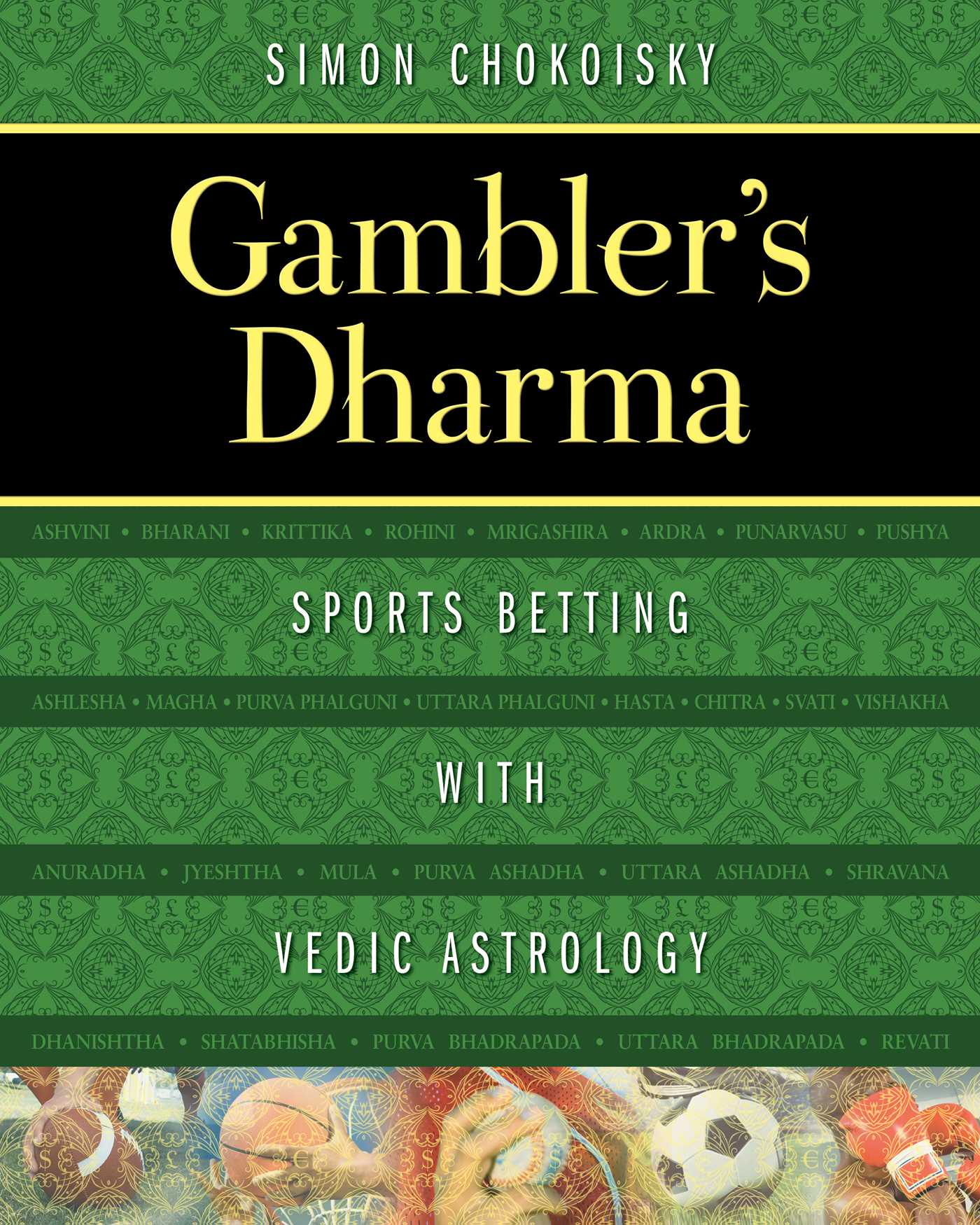 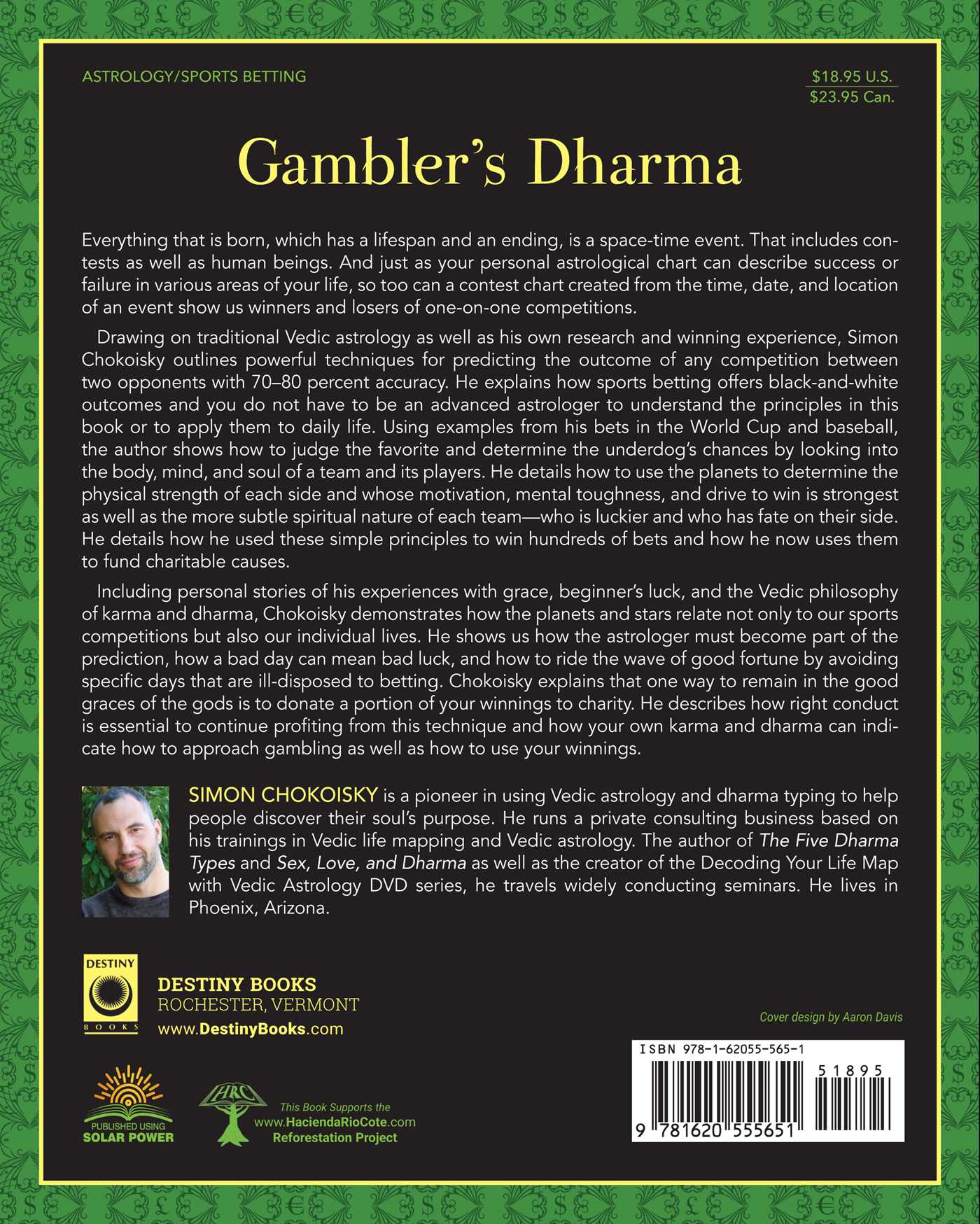 • Details how to determine the physical strength of each side, whose motivation and drive to win is strongest, and who has fate on their side

Everything that is born, which has a lifespan and an ending, is a space-time event. That includes contests as well as human beings. And just as your personal astrological chart can describe success or failure in various areas of your life, so too can a contest chart created from the time, date, and location of an event show us winners and losers of one-on-one competitions.

Drawing on traditional Vedic Astrology as well as his own research and winning experience, Simon Chokoisky outlines 5 powerful techniques for predicting the outcome of any competition between two opponents with 70–80 percent accuracy. He explains how sports betting offers black-and-white outcomes and you do not have to be an advanced astrologer to understand the principles in this book or to apply them to daily life. Using examples from his bets in the World Cup and baseball, the author shows how to judge the favorite and determine the underdog’s chances by looking into the body, mind, and soul of a team and its players. He details how to use the planets to determine the physical strength of each side and whose motivation, mental toughness, and drive to win is strongest as well as the more subtle spiritual nature of each team--who is luckier and who has fate on their side. He details how he used these simple principles to win hundreds of bets and how he now uses them to fund charitable causes.

Including personal stories of his experiences with grace, beginner’s luck, and the Vedic philosophy of karma and dharma, Chokoisky demonstrates how the planets and stars relate not only to our sports competitions but also our individual lives. He shows us how the astrologer must become part of the prediction, how a bad day can mean bad luck, and how to ride the wave of good fortune by avoiding specific days that are ill-disposed to betting. Chokoisky explains that one way to remain in the good graces of the gods is to donate a portion of your winnings to charity. He describes how right conduct is essential to continue profiting from this technique and how your own karma and dharma can indicate how to approach gambling as well as how to use your winnings.

The Dharma and Grace of Prediction

In ancient India, various traditions were developed to help us find our dharma--the natural law of our being--by which we minimize undesirable karma and optimize harmonious life experience. Ayurveda is for the dharma of the body; vastu is to help us understand our relationship to the environment; the dharma types are for finding our purpose on this planet; yoga, tantra, and Vedanta help us align with our spiritual dharmas; and jyotisha, or Vedic astrology, helps us make sense of the cosmos and how we relate to it. Honor the five levels of dharma and your life will run more smoothly.

It is my experience that the techniques in this book work; whether they work in the crucible of your experience depends upon, among other things, how well you are living your purpose. Having a bad day? Not living your dharma? Your results will reflect that. As an astrologer, if your stars are misaligned for accurate predictions, then the system you use, no matter how powerful, will produce limited success.

In the minds of our forefathers, science was both objective and subjective, and the scientist was always part of the experiment, influencing its outcome by his or her presence and intention. The more powerful the intention, the greater the influence. When judging a chart, the greater the desire to know, the more likely it is that an answer will be revealed.

Scientifically-minded folks tend to sneer at this word as it represents an unquantifiable sixth sense, something hard to fit into a purely scientific paradigm. In the Vedic view, the mind is in fact the sixth sense, collecting information from the other five and synthesizing it into a holistic whole.

The word intuition means “to perceive directly without reasoning,” “to look at, consider” while science comes from the Proto-Indo-European root skei which means to “split apart, dissect.” Thus, science is understanding nature by taking apart its components; intuition is understanding nature by putting them together--synthesizing information to form a holistic conclusion.

Many charts you read will show good points for both teams. Some may be very close calls. This is where intuition born of grace and experience can make the difference--that feeling that comes from having seen thousands of combinations and being open to your own inner knowing. Psychologists who study skill acquisition note that at the highest level, mastery becomes an unconscious part of us, a feeling about the right move at the right time. Ancient traditions refined this basic reality of human skill and performance and expressed it variably as the muse.

The ancient Greeks, Romans, Egyptians, and Vedic peoples acknowledged the presence of a muse--an ishta devata in Sanskrit--that is the external manifestation of a body of knowledge. The muse is an embodiment of the skill mastery we wish to cultivate, whispering in our ear when we are open to hearing. The muse may also express as a feeling in the stomach--a slight discomfort for a negative outcome, a sense of certainty or ease for a positive one.

Fixed, Mixed, and Take Your Pick

Finding the correct prediction also depends on karma. Everything that is born in space and time has a karmic signature, and in theory, that signature is open to being read using, among others, the techniques in this book. The easiest charts to read are those in which karma is relatively fixed. That means, despite the best efforts of players to the contrary, a certain result is indicated. This happens less often than you might think. Most charts, especially as you begin to study, will show good and bad for both sides. But the more practiced you become, the more you will discern where free will is at play and where games are relatively predestined. These are the games you count on as a sports investor.

In order to judge a natal chart properly, the rule of three is useful to remember:

1. If something happens once, it could be a coincidence

2. If something happens twice, it could be a pattern

3. If something happens three or more times, it is a pattern.

One swallow doth not a summer make. But when several indications point to an outcome, when a team is beleaguered on multiple sides--as indicated by the various techniques in this book--while the other team remains relatively affliction-free, you can venture to predict that game with better confidence.

In this book there are numerous charts that look eerily similar. In some of these the underdog wins, in others the favorite. I will show you how to spot the combinations accounting for subtle differences as well as how to transfer this to other areas of Vedic astrology, such as natal astrology.
Simon Chokoisky

Simon Chokoisky is a pioneer in using Vedic Astrology and Dharma Typing to help people discover their soul’s purpose. He runs a private consulting business based on his trainings in Vedic life mapping and Vedic Astrology. The author of The Five Dharma Types and Sex, Love, and Dharma as well as the creator of the Decoding Your Life Map with Vedic Astrology DVD series, he travels widely conducting seminars. He lives in Phoenix, Arizona.

“The author demonstrates a deep understanding of his subject. He writes clearly and eloquently, offering a spiritually inspired, and ultimately practical, guidebook for personal fulfillment.”

“. . . this book is enthralling and should appeal to many students of Vedic tradition and yoga.”

“Simon Chokoisky’s The Five Dharma Types is a beautiful book. Reading it carefully will give you insight into your dharma and help you heal your life.”

– Dr. Vasant Lad, author of Ayurveda: The Science of Self-Healing

“This work has opened doors of insight and perception, allowing me to see our species in a fresh and hopeful light. I hope people will read this book more than once, and slowly.”

– Robin Gile, coauthor of The Complete Idiot’s Guide to Palmistry