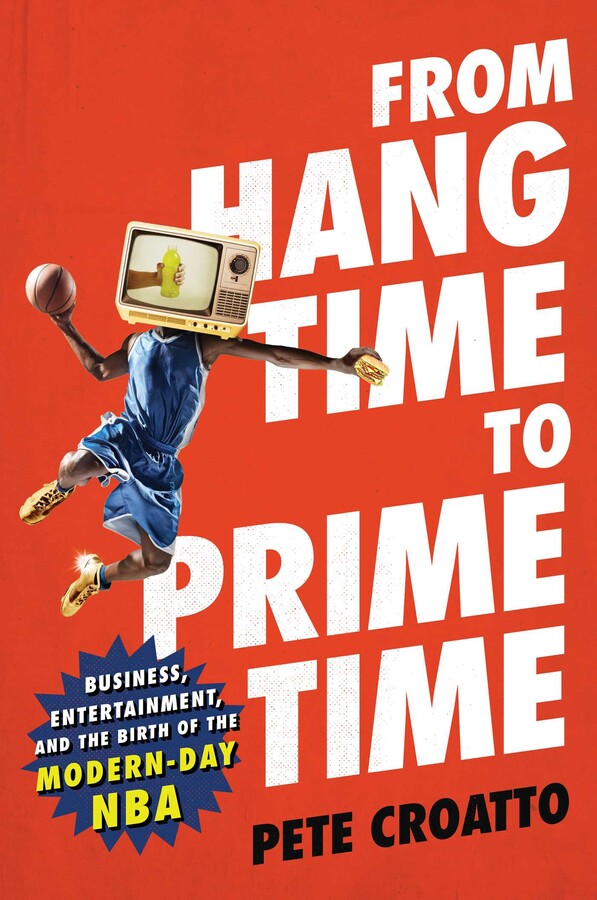 By Pete Croatto
LIST PRICE $12.99
PRICE MAY VARY BY RETAILER

Perfect for fans of Moneyball and The Book of Basketball, this vivid, thoroughly entertaining, and well-researched book explores the NBA’s surge in popularity in the 1970s and 1980s and its transformation into a global cultural institution.

Far beyond simply being a sports league, the NBA has become an entertainment and pop culture juggernaut. From all kinds of team logo merchandise to officially branded video games and players crossing over into reality television, film, fashion lines, and more, there is an inseparable line between sports and entertainment. But only four decades ago, this would have been unthinkable.

Featuring writing that leaps off the page with energy and wit, journalist and basketball fan Pete Croatto takes us behind the scenes to the meetings that lead to the monumental American Basketball Association–National Basketball Association merger in 1976, revolutionizing the NBA’s image. He pays homage to legendary talents including Julius “Dr. J” Erving, Magic Johnson, and Michael Jordan and reveals how two polar-opposite rookies, Larry Bird and Magic Johnson, led game attendance to skyrocket and racial lines to dissolve. Croatto also dives into CBS’s personality-driven coverage of key players, as well as other cable television efforts, which launched NBA players into unprecedented celebrity status.

Essential reading whether you’re a casual or longtime fan, From Hang Time to Prime Time is an enthralling and entertaining celebration of basketball history.

Pete Croatto’s writing has appeared in many outlets, including The New York Times, Columbia Journalism Review, Rolling Stone, and more. He lives just outside Ithaca, New York, with his wife, daughter, and a basketball hoop in the driveway. From Hang Time to Prime Time is his first book. Follow him on Twitter: @PeteCroatto.

PRAISE FOR  From Hang Time to Prime Time…

“In these days of LeBron and Zion and shoe deals and gazillion-dollar arenas, it's easy to forget that, not so long ago, the NBA was a podunk operation just fighting for a crumb. But thanks to Pete Croatto's brilliant work, the rise of the league (or, these days, The League) is brought forth in full color, with zest and passion and oomph. It’s outstanding.” – Jeff Pearlman, author of Showtime: Magic, Kareem, Riley, and the Los Angeles Lakers Dynasty of the 1980s.

“From Hang Time to Prime Time is deeply reported, smart, fun—and important. All the great players are here—Dr. J, Bird, Magic, Jordan—and so are the shoe deals, the songs, and the TV broadcasts that shaped the  modern game. If you want to understand how and why the NBA changed the world, this is a great place to start.”–Jonathan Eig, author of Ali: A Life

“Meticulously researched and deeply reported, From Hang Time to Prime Time takes basketball fans on a rollicking journey through the sport they love. Chronicling all the secret backroom deals, Hall of Fame talents, twists of fate, and everything else that paved the way for the modern NBA, Croatto has written a definitive and vital history that will stand the test of time.” —Erik Malinowski, author of Betaball: How Silicon Valley and Science Built One of the Greatest Basketball Teams in History

“It’s difficult imagining the NBA as anything but the cultural and financial juggernaut that it is. Of course, the league didn’t start out the way. In From Hang Time to Prime Time, Pete Croatto deftly documents, explores and details the twists and turns, the coincidences and circumstances, and the many, many personalities that contributed to the NBA ‘s evolution into today’s behemoth”—Jonathan Abrams, author of Boys Among Men: How the Pro-to-Prep Generation Redefined the NBA and Sparked a Basketball Revolution

“A marvel of intention, focus, and reporting, Pete Croatto's FROM HANG TIME TO PRIME TIME tells the story of the rise and professionalization of basketball culture and business with intimacy, humanity and even comedy. In a sports universe of superstars and sycophants, Croatto's book stands apart as a testimonial of how such worlds truly get built--on successes and failures, shrewd innovation and sheer luck, a host of scrappy and surprising characters from all walks of life hustling to get the deals done. The NBA we know and love hardly emerged fully formed. Croatto generously treats us all to courtside seats for its remarkable evolution.”—Howie Kahn, co-author of Sneakers

“I love basketball. You might say it's a lifelong obsession. And I love reading the work of other basketball obsessives. Particularly when they write with as much heart and fire as Pete Croatto does. This book is a Meadowlark Lemon half court hook, sweet on the release, sweeter as it travels in the air, and even sweeter as it swishes cleanly through the hoop.”—Brian Koppelman, co-creator of Billions

"The growth of the NBA over the past 45 years is interesting not just because of its remarkable rate of expansion but also for how many segments of U.S. culture the sport intermingled with along the way. As Croatto shows repeatedly in From Hang Time to Prime Time, basketball's growth was fueled by factors such as sneaker sales, the political landscape of the U.S. and the burgeoning hip-hop culture. The book has plently of hoop anecdotes, but what makes it shine is the stuff adjacent to the game. Erstwhile All-Star forward Curtis Rowe doesn't appear; Kurtis Blow does, more than once." — Sports Illustrated

"Any fan of the game would do well to pick this up—it's a slam dunk." — Publishers Weekly (starred review)

By Pete Croatto
LIST PRICE $12.99
PRICE MAY VARY BY RETAILER