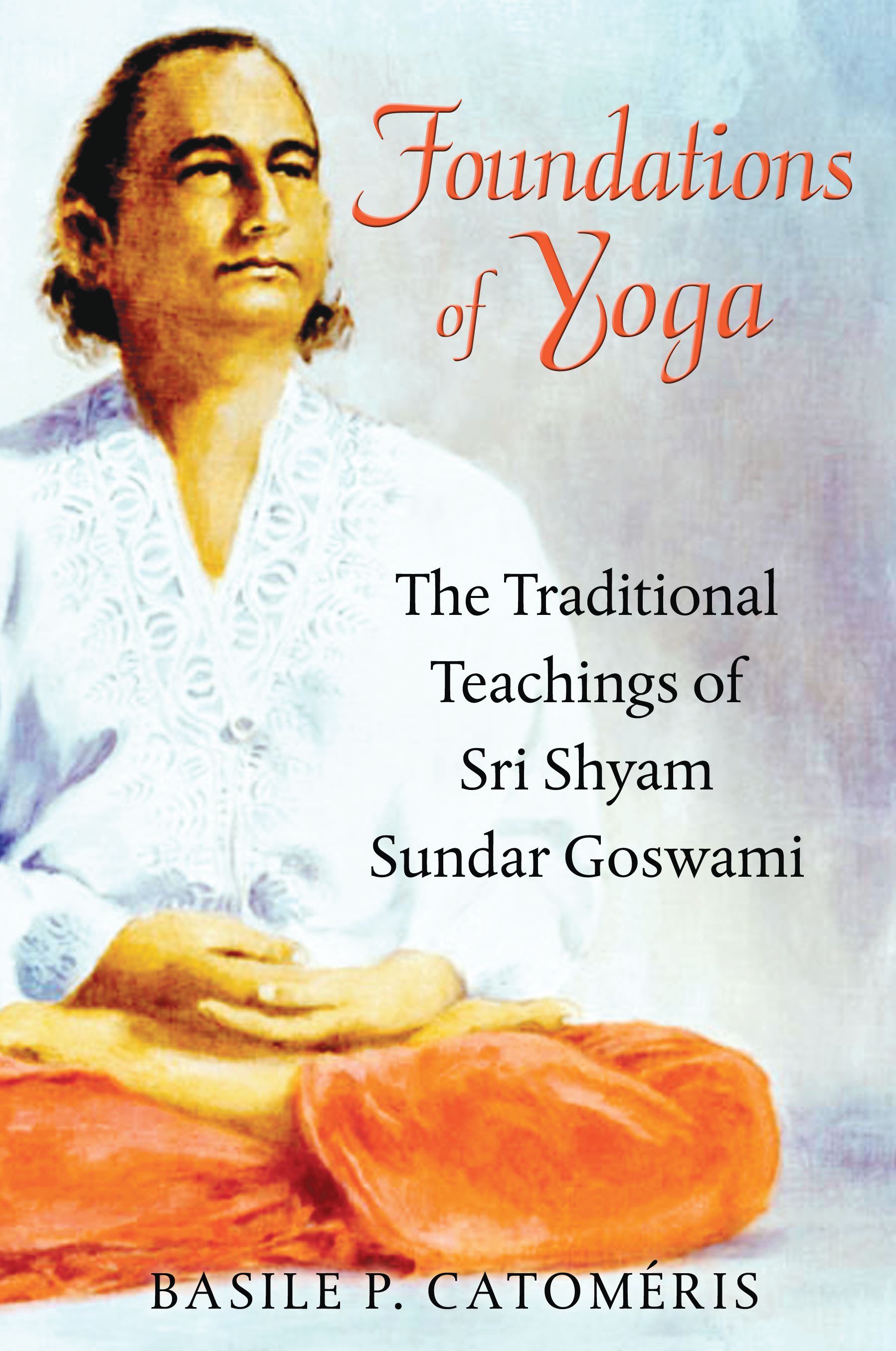 • Shows how to enrich your physical Yoga practice by embracing and integrating Hatha Yoga’s metaphysical, spiritual, and psychological traditions

Foundations of Yoga presents the full and rigorous yogic training of traditional Hatha Yoga as taught by renowned Indian Yoga master the late Sri Shyam Sundar Goswami. Written by his disciple and spiritual heir, the book emphasizes metaphysical, spiritual, and psychological cultivation in addition to physical practice. It offers Yoga practitioners and teachers a way to enrich and advance their physical Yoga practice through a deeper understanding of physiology, psychology, philosophy, and spirituality centered on vedic and tantric principles.

Woven together with stories from Sri Shyam Sundar Goswami’s life, the book explains pratyâhâra (control of the senses), châranâ (yogic bodybuilding), mental concentration exercises, and the energy-focusing and purifying muscular-control movements known as mudras, including the metabolism-boosting mahamudra and advanced pelvic mudras and sexual practices to transcend the ego. The book explores methods of internal purification such as dhauti (cleansing of the stomach with air or water), vasti (intestinal cleansing), neti (nasal cleansing), trâtaka (visual concentration exercises), and kapâlabhâti (diaphragmatic hyperventilation) and shows how these purifications are necessary before beginning the advanced breathing practices of prânayâma to eradicate deep internal impurities and strengthen the immune system. Exploring the philosophy of Yoga, the book shares meditative exercises for introspection, expanding consciousness, and seeking your true divine nature.

As the teachings and life of Sri S. S. Goswami show, by strengthening the body, vital force, and mind, one can master all three for a long, healthy, harmonious life.

Born on October 11, 1891, in Santipur, West Bengal, India, Shyam Sundar Goswami comes from an ancient lineage that goes back more than seven centuries. Goswami had been a weak child predisposed to illness, and he tried several systems of physical education, both Eastern and Western, that were supposed to reinforce his immune system. But only when he was guided and initiated into the discipline of Hatha Yoga by Balaka Bharati, a hermit yogi with extraordinary powers, was the young Goswami able to improve his health, reinforce his immune system, and develop extraordinary power and control in both the physical and mental realms. His qualities, to which one should add his erudition and brilliance, procured him the honorary title of “Lion of Bengal.”

My first meeting with Sri Shyam Sundar Goswami took place during a conference in Stockholm, Sweden. It was only later that I understood the truly remarkable nature of our encounter, which took place on September 7, 1956--an auspicious day, because it was my birthday. Moreover, that very morning my son was born, the first child of a happy marriage.

My initial relationship with this yogi was only the formal one of teacher to pupil, but in time it would develop into something different. From my early youth I had been interested in philosophy. One day when I was chauffeuring the “Professor”--the title used by his Swedish entourage--I asked him the meaning of two Sanskrit terms that I had gleaned from an oriental text.

Rarely a loquacious person, the passenger of my little Citroën car replied: “If you really want to know the answer, you should come to my Raja Yoga classes.”

Despite family obligations, financial constraints, and the handicap that was placed on me by being an immigrant worker, my thirst for knowledge was so great that I attended his classes. At first I suffered from a lack of comprehension of the numerous technical terms, both in English and Sanskrit, that came out of the mouth of this modern St. John Chrysostom, a man of exceptional erudition.

At the beginning of our relationship, the Professor was, in my eyes, just a brilliant representative of Indian culture who was involved in learned research. But after a certain amount of hesitation on my part, arising from my innate skepticism, Sri S. S. Goswami would become for me not only the transmitter of a vast body of knowledge relating to every aspect of life but also what Hindus from all castes and epochs call a guru--a spiritual guide.

It was only after two decades of continual study and practice that this founding father of modern yoga, shortly before his death, deemed it appropriate to grant me a formal initiation (dikshā) that would perpetuate the extraordinary relationship of teacher and disciple, the unfailing presence of a guide, friend, and counselor. It was a relationship that allowed me to discover myself, while leaving me free to appreciate the beauty of friendship and pure love, which is the essence of all manifested spirituality.

It is not always easy with Sri Shyam Sundar Goswami to distinguish the teaching from the teacher, to understand someone who dispenses knowledge and wisdom in measured doses and is a living example of the metaphysical synthesis of all knowledge. A person visiting this Hindu sage would be impressed by the silence and tranquil atmosphere that reigned in his study, filled with an impressive quantity of books and manuscripts. The visitor would first see him from the back, seated in his armchair, his upper body absolutely straight, his build athletic, a shock of white hair crowning his tilted head. The scratching sound of a pen would give away the fact that he was writing on one of the pages in his notebook.

Retaining the pragmatism that characterizes the nature of a thinker and a man of action, while remaining faithful to the tradition of yoga, Sri Goswami’s teaching was essentially oriented toward a mastery of the mind and the body, which led the adept to the sublime ideal of deva deha. His teaching included the basic subject matters that relate to the study of the fundamental questions of our existence, human ontology, eschatology with (in the context of Hinduism) the underlying theory of rebirth, as well yogic soteriology, which is traditionally a theistic liberation.

This yoga master taught at several related but distinct levels, according to the leanings and maturity of the pupil. For certain students, renewed physical and mental well-being was the primary motivation; for others, the philosophical aspect of the discourse awakened their intellectual curiosity. In a restricted circle of ambitious pupils, these two complementary aspects were not sufficient; such students needed the fulfillment of profound study, probing into the mysteries of the mind. And for some, religious feeling stimulated an unquestioning adherence to the spiritual ideal presented by this remarkable representative of yoga, whom they asked to assume the role of their spiritual guide.

If one had to summarize the lessons of this master of Hindu wisdom one would remember not to consider a human being solely in the light of his virtues, apparent limitations, ethnic origin, social standing, or any aspect of his personality. An integrated man who is aware of his potential and true nature must evolve in all the conscious levels of his being: the body, prāna (vital life force), mind (intellect, will, feeling, and aesthetic sense), morality, religion, and spiritual life.

During two world tours, Sri Goswami introduced the discipline of yoga in scientific terms, thus building a lasting bridge between India and the West. He did not hesitate to reveal the oral tradition of chāranā, an ancient form of yogic bodybuilding that remains undocumented to this day. The secret of this method of physical education is still jealously guarded by its practitioners. Wherever he lectured he gave demonstrations of muscle and organ control, until then considered impossible.
Basile P. Catoméris

Basile P. Catoméris is the disciple and spiritual heir of Sri Shyam Sundar Goswami. Devoting his life to the study and practice of yogic traditions, he studied under Sri S. S. Goswami from 1956 until his death in 1978, whereupon he took over Sri S. S. Goswami’s teaching duties at the Goswami Yoga Institute in Sweden. In December 1983, he was granted yogic final initiation (brahma mantra diksha) by Ma Santi Devi, Sri Goswami’s “spiritual mother.” He lives in southern France.

“A profound and lucid study of yoga in the deeper sense of the term, covering both practice and philosophy. Foundations of Yoga is an important book for those who are interested in how Hatha Yoga relates to the greater transformation of body, mind, and heart.”

– David Frawley, author of Yoga & Ayurveda and founder of the American Institute for Vedic Studies

“In Foundations of Yoga, Basile P. Catoméris presents a comprehensive view of the ancient practice of Yoga through the eyes of a present day yogi. Those interested in the roots of yogic philosophy and practice will find his clear explanations informative and enlightening.”

“It is with the greatest pleasure I recommend Basile P. Catoméri’s book Foundations of Yoga. Sri Shyam Sundar Goswami and his understanding and practical application of hatha yoga has been instrumental in spreading this form of yoga in the West. The increased interest in the practice of hatha yoga in Europe and the United States makes this book especially important.”

“This book is recommended for those who want to move beyond a perfunctory level...In the spirit of his predecessor, Catoméris offers an excellent synthesis of the ancient science of yoga that will help guide serious aspirants on their journey toward a healthy body and peaceful mind.”