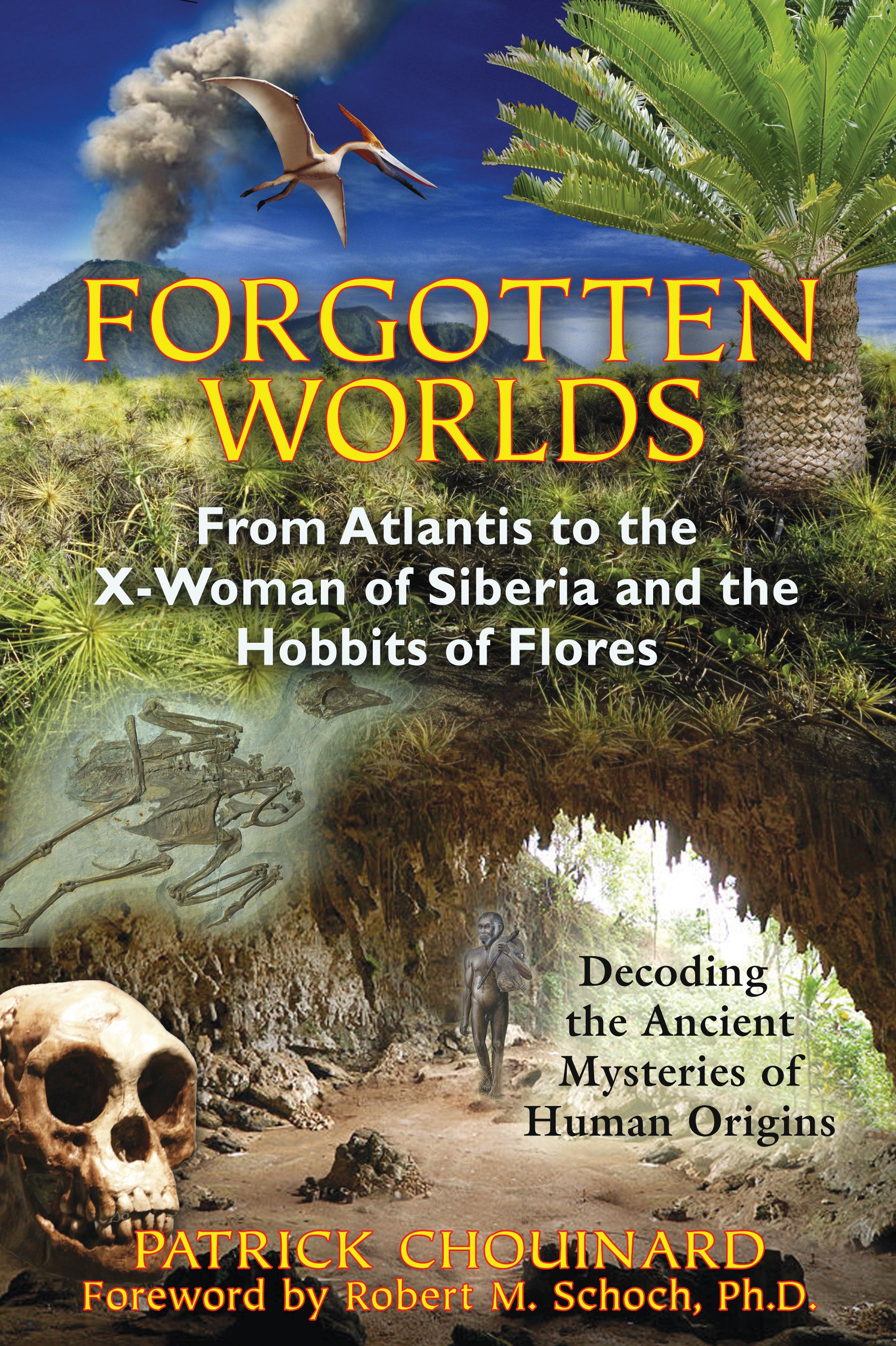 An examination of the mythological, historical, and archaeological evidence for lost civilizations throughout the world

• Explores unexplained mysteries such as the Caucasian mummies of China, the pyramids of Caral in Peru, and the genetically unique X-woman of Siberia

• Examines evidence of lost, ancient civilizations in Asia, Europe, and the Americas, including extensive investigation into Atlantis

Over and over again, mainstream views of early history--which state that the first civilizations arose around 3500 BCE--are plagued by evidence of much older civilizations, evidence ranging from artifacts and inexplicable remains to pyramids and ubiquitous myths that clearly speak of great empires prior to the rise of the Sumerian city states and pharaonic Egypt.

Viewing Atlantis and its many related myths as a metaphor for a long-lost global civilization, Patrick Chouinard explores the mythological, cultural, religious, and archaelogical evidence for many forgotten civilizations in Europe, Asia, and the Americas. He addresses unexplained mysteries from around the world, such as Caucasian mummies found in China, the pyramids of Caral in Peru, the “hobbit” remains on Flores Island, the giant heads of Easter Island, the lost legacy of Lemuria, the ideology and occult mysticism behind Nazi theory, and the genetically unique X-woman of Siberia. He also examines evidence of ancient alien visits and other supernatural phenomena in the distant past. Using recent archaeological findings, he shows that Siberia and the Amazon may have been cradles of humanity millennia before Africa. Sounding the call to continue searching ancient, remote, and formerly forbidden regions for lost cultures and genetic root races, Chouinard offers a new chronology for the emergence of human life and civilization as well as a new mechanism for how and why societies and species change over time. By finding lost peoples and their forgotten worlds, we can truly begin to understand the human race and learn from its long history.

Chapter 10
The Caucasian Mummies of China

In the late 1980s Chinese archaeologists unearthed hundreds of Caucasian mummies along the western frontier of China. Other ancient corpses located in Mongolia, Siberia, and central Asia were also discovered. These mummies date back to at least 3500 BCE, while still others have been determined to be far more ancient, dating to around 5000-4000 BCE.

Seeking answers about these mummies was an American team headed by Dr. Victor Mair, professor of Chinese literature at the University of Pennsylvania, and a group of his colleagues, including Jeannine Davis-Kimball, executive director at the Center for the Study of Eurasian Nomads. When the American team arrived at the Urumchi Museum in Urumchi--the capital of the Xinjiang region of China (formerly known as East Turkestan)--they were waved into a large chamber filled with rows of mummies, some looking as if they had died within the past forty-eight hours. Others were seriously deformed or in a state of advanced decomposition. Some appeared to be Mongolian, perhaps the ancestors of Genghis Khan, but others, as shocking as it might seem, were clearly Western, dating as far back as 4000 BP.

A red-haired Chärchän man, dubbed “Ur-David,” bore the indelible stamp of the West, both in terms of ethnicity and as evidenced by his beautifully colored pants and clothing--the earliest examples of such clothes in known history. Wisps of blond Nordic hair were seen peeking from beneath the rim of his red and blue felt cap and, echoing ancient Greek tradition, blue stones had been placed in his eyes as part of an obvious death ritual, preparing him for a meeting with the gods in paradise.

The clothing that the mummies wore seemed reminiscent of clothing worn by the Celtic tribes of Ireland, Britain, and Gaul, in that it included plaid tunics. Textile expert Dr. Elizabeth Wayland Barber notes that although it was once thought that the Scots adopted plaid twill fabric only relatively recently, it is now clear that the Celts and the Western European Grooved Ware culture before them had been using this stylized fabric for thousands of years. Its use by the Tarim Basin people speaks of a proto-Celtic origin. It might be posited that this finding was evidence of a reverse migration and that the Celts could trace ancestry to Central Asia instead of Central Europe.

Scholars Christopher Knight and Robert Lomas, in their book Uriel’s Machine, have this to say about these strange mummies:

These European settlers used a woven-wool textile technology . . . woolly sheep with coats suitable for making woolen yarn did not appear in Europe until 4000 BCE. When a first sample of organic material was sent from the graves of the mummies, Naning University dated a sample of carbon to roughly 2000 BCE.

There was another mummy with clear Caucasian traits--a forty-year-old, brown-haired woman. The team leader of the original Chinese expedition that found her, Mu Shun Ying, was impressed by her immaculate state. She called her the “Loulan beauty,” since her appearance seemed beautiful even in death. (In fact, many of the mummies of the Tarim Basin exhibited an equal prettiness.) Radiocarbon dating set this mummy at around 3,800 years old. Found in close proximity to the “beauty” was another mummy in a tomb constructed from wood. Radiocarbon dating on the materials used to construct the tomb placed its origins as early as 6000 BP.

Removed from the same tomb as the two others was the honored mistress of the tomb, clearly of Indo-European origin: she was tall, had a long-nose, a narrow visage, and blond hair. “She must have been a real beauty when she was alive,” said one of the archaeologists who initially worked on her. Her long blond hair, almost perfectly preserved, caressed her narrow shoulders and ran downward toward the middle of her chest. She had been rescued from an ancient burial site in 1978 by Chinese archaeologist Wang Binghua at Qizilchoqa, east of Urumqi, which is the capital city of the Xinjiang-Uyghur Autonomous Region.

Also presented to the team was a far later relic known as the “Hami Mummy.” It dated to approximately 1400-800 BCE and had a distinctive head of red hair. Still another group known as “the Witches of Subeshi” managed to turn a number of heads when they were put on display. Dr. Elizabeth Barber, in her book The Mummies of Ürümchi, commented in amazement about the bone-chilling scene and its apparent mythological implications.

Yet another female--her skeleton found beside the remains of a man--still wore a terrifically tall, conical hat, just like those we depict on witches riding broomsticks at Halloween or on medieval wizards intent on their magical spells. And that resemblance, strange to say, may be no accident. Our witches and wizards got their tall, pointy hats from just where we also got the words magician and magic, namely, Persia. The Persians or Iranian word magus (cognate with the English might, mighty) denoted a priest or sage, of the Zoroastrian religion in particular. Most distinguished themselves with high hats, they also possessed knowledge of astronomy, astrology, and medicine, of how to control winds and the weather by potent magic and how to contact the spirit world.

In March of 2010 the archaeological community was stunned by the discovery of yet another Caucasian skeleton, this time in Mongolia. DNA extracted from this individual’s bones confirms a direct genetic link to the West. In essence, these remains were clearly European, if not Western Eurasian. This time, however, the ancient corpse was a much younger find. It dated to around the first century CE, about 2,000 years ago. This corresponds roughly to the time of Christ.
Patrick Chouinard

“Chouinard’s book reasserts that a new timeline for our ancient history needs to be instigated--one that also takes seriously what local myths and legends have to offer in cracking these mysteries.”

“Patrick Chouinard provides an important bridge between what has been learned in the past to what will be learned in the future. Well researched, highly readable, and enthusiastic work!”

– Christopher Dunn, author of The Giza Power Plant and The Lost Technologies of Ancient Egypt