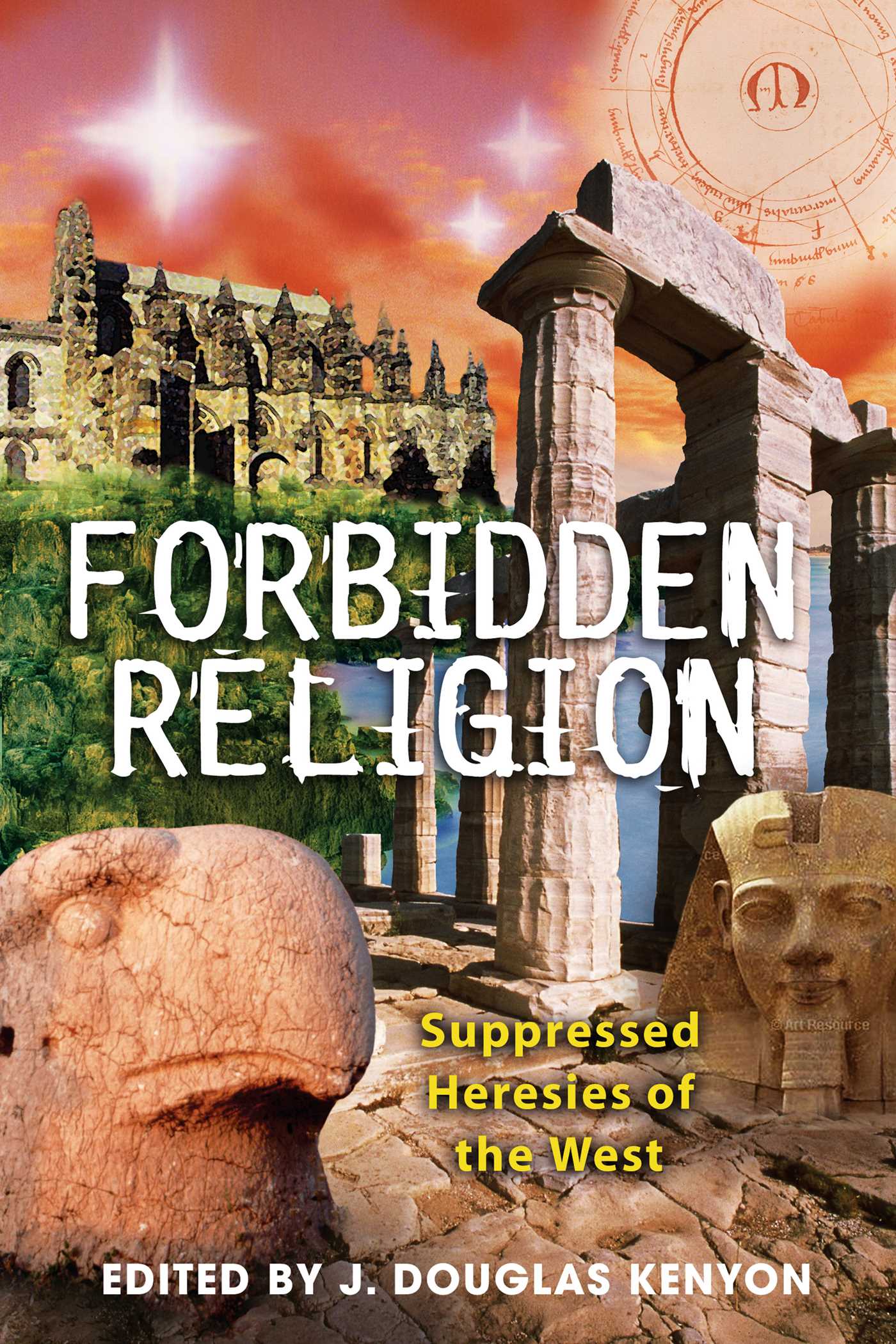 Suppressed Heresies of the West

Following the model of his bestselling Forbidden History, J. Douglas Kenyon has assembled from his bi-monthly journal Atlantis Rising material that explores the hidden path of the religions banned by the orthodox Church--from the time before Christ when the foundations of Christianity were being laid to the tumultuous times of the Cathars and Templars and the Masons of the New World. Revealed in this investigation of the roots of Western faith are the intimate ties of ancient Egyptian religion to Christianity, the true identities of the three magi, the link forged by the Templars between early Christianity and the Masons, and how these hidden religious currents still influence the modern world.

This book serves as a compelling introduction to the true history of the heretical religious traditions that played as vital a role in society as the established faiths that continuously tried to suppress them. Born in the same religious ferment that gave birth to Christianity, these spiritual paths survived in the “heresies” of the Middle Ages, and in the theories of the great Renaissance thinkers and their successors, such as Isaac Newton and Giordano Bruno. Brought to the New World by the Masons who inspired the American Revolution, the influence of these forbidden religions can be still found today in “The Star Spangled Banner” and in such Masonic symbols as the pyramid on the back of the dollar bill.

1 The Mystery of the Christ

Is There More to this Story than Even Hollywood Imagines?
--J. Douglas Kenyon

As millions have flocked to see Mel Gibson’s The Passion of the Christ, a multitude of controversies has also arisen. For some the issue is: can such graphic violence serve a spiritual purpose? For others, questions of anti-Semitism are crucial, while still others see advancement for a religious agenda.

Opinion divides, it seems, largely along believer/non-believer lines. On one side is mainstream Christianity--represented by both Catholics and Protestants--and on the other, the secular humanist establishment. Ironically, both sides base their reaction on literal Biblical interpretation. Christians who read the Bible literally and believe accordingly are opposed by secularists who object to the literal meaning of the Bible and maintain their disbelief accordingly.

Both camps attempt to apply an essentially materialistic standard to subject matter usually considered spiritual. Almost unheard in the tumult is a third point of view, which looks for meaning in more symbolic terms and along some of the less traveled byways of history. Often stereotyped as “New Age,” its adherents can actually claim a pedigree far older than that of most popular religions, including Christianity and even Judaism. Sometimes called the perennial wisdom or an esoteric or mystical brand of Christianity, its general outlines are accepted by authorities as diverse as Edgar Cayce, Mary Baker Eddy, Paramahansa Yogananda, and Helena Petrovna Blavatsky.

According to this thinking, the real power of Christ’s message to bestow eternal life has been stolen from Christianity by a corrupt elite who attempt to frustrate the natural aspiration of “God’s children” on Earth. This holy aspiration--an intended return to the creator/parent, which represents the true wine of a traditional ancient wisdom tradition personified by Jesus--has been turned back to mere water by Earth’s powers and principalities.

Advocates for esoteric Christianity point out that the Bible, as presently constituted, is the product of church councils convened to address early controversies. The Council of Nicea, for instance, was assembled in A.D. 325 by Constantine I, the newly converted Christian emperor of Byzantium. At the top of the agenda was the so-called Arian heresy. This argument about the divinity of Jesus was waged between the Gnostics (or Arians) and the Niceans. The Gnostics sought direct personal knowledge of God (gnosis) and took very seriously such statements by Jesus as “Know ye not that ye are gods?” and “The kingdom of heaven is within you.” The Niceans, on the other hand, saw Jesus as the absolutely essential mediator between God and man. The Gnostics were out-voted and their teachings were thereafter forcibly removed from Church doctrine.

Some researchers, including Michael Baigent, Richard Leigh, and Henry Lincoln in IThe Messianic Legacy, have argued that the fourth-century Gnostics inherited the mantle of the apostle James, brother of Jesus and leader of the first-century Church. However, few people realize that the Church’s early years produced many gospels and books purported to have been authored by direct associates of Jesus (i.e., The Gospel of Thomas and The Gospel of Mary Magdalene as well as the recently discovered Gospel of Judas). Most of these gospels and books were destroyed by the Church’s ruling faction, which wanted no interference with its designs. Some, however, have been recently rediscovered near Nag Hammadi, Egypt. Author Elaine Pagels has included many excerpts in her bestseller The Gnostic Gospels.

The Gnostic texts appear to fill in gaps, exposed by discoveries in the 1950s, of the so-called Dead Sea Scrolls near Qumran in Palestine. Despite bitter resistance from orthodox scholarship, many respected researchers believe those scrolls were created by a sect known as the Essenes, which likely included Jesus and his followers among its members. Many common elements between the Dead Sea Scrolls and the teachings of Jesus are easily recognized.

Baigent and Leigh, in their book The Dead Sea Scrolls Deception, draw on Robert Eisenman’s theory that the scrolls came from a broad movement that encompassed Palestine and Judea but then go further by contending that the Qumranians and early Christians were not only one and the same, but also were nationalist militants trying to install their priest/king, Jesus, on the throne of Israel, and possibly his brother James after him. They cite, as does Matthew’s gospel, Jesus’s lineage from King David. He becomes, in their view, someone other than the traditional Jesus--a literal king of the Jews--perhaps a freedom fighter against the Roman occupation. Ensuing elements of this story line, as it may have impacted European history, have been made much of in Baigent, Leigh, and Lincoln’s Holy Blood, Holy Grail and, most recently, in Dan Brown’s bestselling novel The Da Vinci Code.

In the last few years, such revelations from alternative scholarship have offered compelling insight into Christian origins. Emerging from the mists of antiquity is a picture of intrigue and treachery in which Jesus’s original teachings were codified into a set of laws and doctrines enforced by a priestly elite in collusion with secular princes determined to preserve their authority. The hidden agenda was to distract the people from troublesome notions of personal immortality, and to substitute instead the specter of sinful guilt--requiring the intercession and vicarious atonement of Jesus. This doctrine mandated the actual worship of Jesus as the wholly unique Son of God and the placing of the burden for all human error on his shoulders alone.

Thus diverted from accepting responsibility for their own sowings, the people were effectively robbed of the power to address their personal challenges and, ultimately, to transcend their circumstances--prevented, in other words, from endangering their rulers.

Seen in such light, the current campaign--spearheaded by Mel Gibson’s movie--to emphasize the suffering of Jesus and to focus upon the guilt associated with it, appears aimed at re-energizing a formula for control, which--though successful for centuries--now seems in danger of losing its grip.

"Forbidden Religion offers a compelling introduction into the true history of religion. The book also reveals the thread that unites the spiritual paths that have opposed orthodox religion over the centuries and the challenge they provide to the status quo."

"[This book is] an important acquisition for any seeking to understand religions banned by the orthodox Church, from pre-Christ times to early Christianity. Here are insights on the Cathars, Templars, and Masons - and probes of how hidden religions still operate in modern times."

" . . . this book may open the way to more constructive, less reactive dialogue over some of the most controversial aspects of history."

Suppressed Heresies of the West