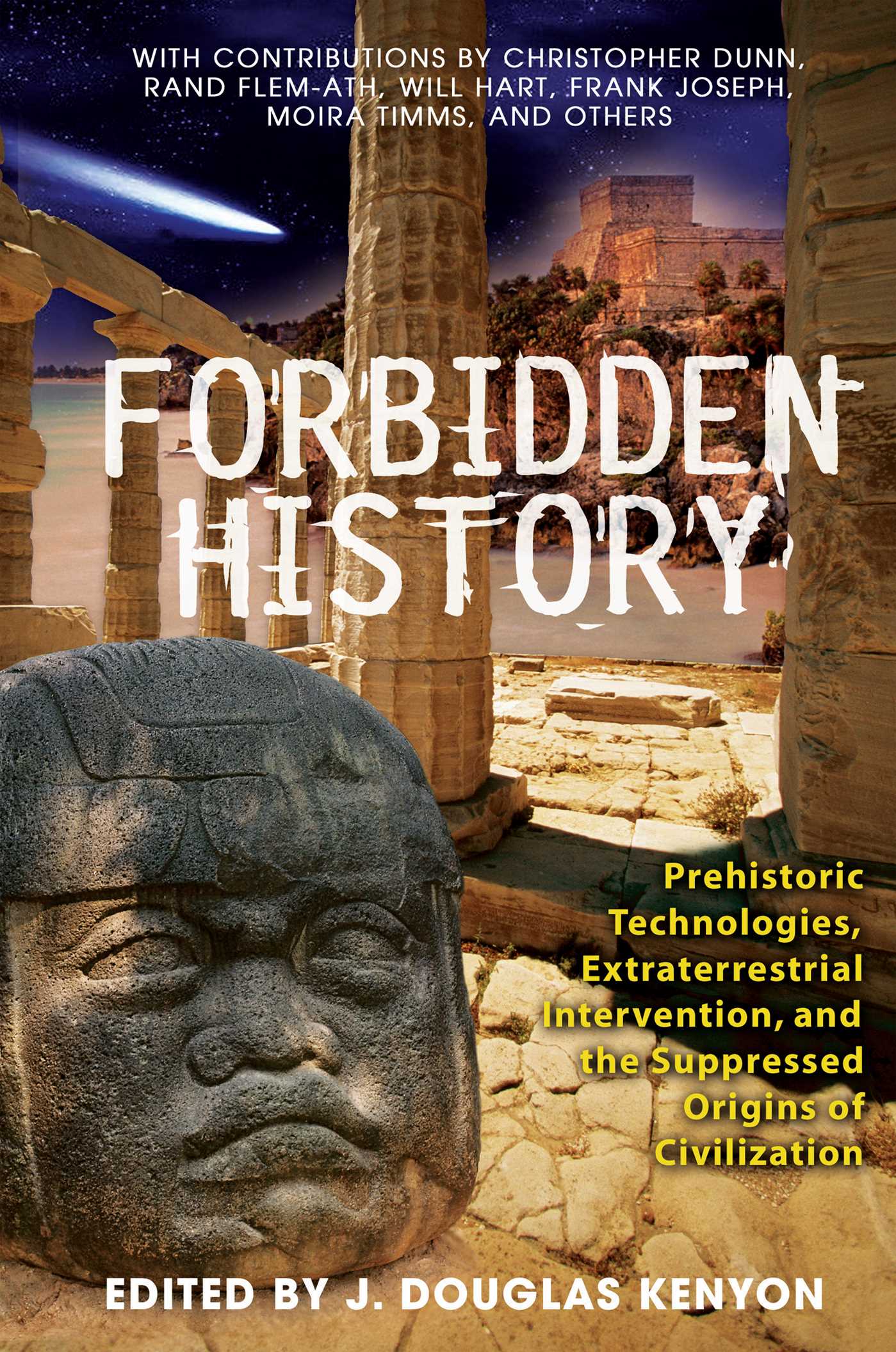 Prehistoric Technologies, Extraterrestrial Intervention, and the Suppressed Origins of Civilization

Challenges the scientific theories on the establishment of civilization and technology

• Contains 42 essays by 17 key thinkers in the fields of alternative science and history, including Christopher Dunn, Frank Joseph, Will Hart, Rand Flem-Ath, and Moira Timmes

In Forbidden History writer and editor J. Douglas Kenyon has chosen 42 essays that have appeared in the bimonthly journal Atlantis Rising to provide readers with an overview of the core positions of key thinkers in the field of ancient mysteries and alternative history. The 17 contributors include among others, Rand Flem-Ath, Frank Joseph, Christopher Dunn, and Will Hart, all of whom challenge the scientific establishment to reexamine its underlying premises in understanding ancient civilizations and open up to the possibility of meaningful debate around alternative theories of humanity's true past.

Each of the essays builds upon the work of the other contributors. Kenyon has carefully crafted his vision and selected writings in six areas: Darwinism Under Fire, Earth Changes--Sudden or Gradual, Civilization's Greater Antiquity, Ancestors from Space, Ancient High Tech, and The Search for Lost Origins. He explores the most current ideas in the Atlantis debate, the origins of the Pyramids, and many other controversial themes.

The book serves as an excellent introduction to hitherto suppressed and alternative accounts of history as contributors raise questions about the origins of civilization and humanity, catastrophism, and ancient technology. The collection also includes several articles that introduce, compare, contrast, and complement the theories of other notable authors in these fields, such as Zecharia Sitchin, Paul LaViolette, John Michell, and John Anthony West.

Media Stereotypes Aside, What Kind of Person Pursues Knowledge of a Forgotten Civilization?

A mainstream archaeologist interviewed about Atlantis on a recent special for The Discovery Channel declared that the only people who believe in such garbage are cranks, fools, and charlatans. His assessment is shared by conventional scientists, who insist that no one of any intellectual worth would demean him- or herself by seriously considering any sunken civilization. True, virtually no university-trained researchers today are willing to risk the wrath of conservative academics not above sabotaging the careers of independently minded colleagues.

But contrary to the Establishment’s defaming characterization of persons interested in the historical possibility of Atlantis, the subject has for centuries attracted some of the best brains in the world. Solon, one of the Seven Wise Men of Greece, was also the first great poet of Athens. In the late sixth century BC, the great lawgiver traveled to Sais, the Nile Delta capital of the 26th Dynasty, where the Temple of Neith was located.

Here a history of Etelenty was preserved in hieroglyphs inscribed or painted on dedicated columns, which were translated for him by the high priest, Sonchis. Returning to Greece, Solon worked all the details of the account into an epic poem, “Atlantikos,” but was distracted by political problems from completing the project before his death in 560 BC. About 150 years later, the unfinished manuscript was given to Plato, who formed two dialogues, Timaeus and Critias, from it.

As one of the very greatest historical figures in Classical Greek history, Solon’s early connection with the story of Atlantis lends it formidable credibility. But neither he nor Plato were the only towering figures of Classical antiquity to embrace the reality of Atlantis. Statius Sebosus was a Greek geographer and contemporary of Plato mentioned by the Roman scientist Pliny the Elder for his detailed description of Atlantis.

All the works of Statius Sebosus were lost with the fall of Classical civilization. Dionysus of Miletus, also known as “Skytobrachion” for his prosthetic leather arm, wrote A Voyage to Atlantis around 550 BC, predating not only Plato but even Solon. A copy of Dionysus’s manuscript was found among the personal papers of historical writer Pierre Benoit. Tragically, it was lost between the borrowers and restorers who made use of this valuable piece of source material after Benoit’s death.

A utopian novel written by Francis Bacon in 1629, The New Atlantis, was the first written discussion of Atlantis since the fall of Classical civilization and probably sparked Athanasius Kircher’s interest in the subject, when he published his own scientific study of Atlantis in The Subterranean World thirty-six years later. Although a work of fiction, The New Atlantis came about through excited discussions in contemporary scholarly circles of reports from travelers to America. They stated that the indigenous peoples had oral accounts of a land comprising numerous points in common with Plato’s sunken civilization; they even called it Aztlan, which paralleled a native version of the Greek Atlantis. The New Atlantis actually incorporates some Atlanto-American myths Bacon heard repeated in London.

A German polymath of the seventeenth century, the Jesuit priest Athanasius Kircher was a pioneering mathematician, physicist, chemist, linguist, and archaeologist. Kircher was also the first scholar to seriously investigate the Atlantis legend. Initially skeptical, he cautiously began reconsidering its credibility while assembling mythic traditions about a great flood from numerous cultures in various parts of the world.

Among the relatively few surviving documents from Imperial Rome, Kircher found a well-preserved, treated-leather map purporting to show the configuration and location of Atlantis. The map was not Roman, but had been brought in the first century AD to Italy from Egypt where it had been executed. It survived the demise of Classical times and found its way into the Vatican Library. Kircher copied it precisely (adding only a visual reference to the New World) and published it in his book The Subterranean World. His caption states it is a map of the island of Atlantis, originally made in Egypt after Plato’s description, which suggests it was created sometime following the fourth century BC, perhaps by a Greek mapmaker attached to the Ptolemies. More probably the map’s first home was the Great Library of Alexandria, where numerous books and references to Atlantis were lost, along with another million-plus volumes, when the institution was burned by religious fanatics. By relocating to Rome, the map escaped that destruction.

Although the map vanished after Kircher’s death in 1680, it was the only known representation of Atlantis to have survived the Ancient World. Thanks to his research and book, it survives today in a close copy. Curiously, it is depicted upside-down, contrary to maps in both his day and ours. Yet this apparent anomaly is proof of the map’s authenticity, because Egyptian mapmakers, even as late as Ptolemaic times, designed their maps with the Upper Nile Valley (located in the south, “Upper” refers to its higher elevation) at the top, because the river’s headwaters are located in the Sudan.

Contrary to mean-spirited characterizations by conservative archaeologists, it says something for the credibility of Atlantis that many of the greatest thinkers in the history of western civilization have been among its most prominent advocates.

". . . a case in support of a much greater antiquity for civilization, a convincing argument for the existence of advanced technologies in prehistory, and the outline of a lost fountainhead of world culture."

“. . .essays by such well-known investigators as Robert Schoch, Christopher Dunn or Rand Flem-Ath examine surprisingly sophisticated technology in Pharaonic Egypt, and reconsider possibilities for a global catastrophe that may have altered the course of civilization. . . . this superb new book. . . has much to offer anyone questioning the official party-line concerning mankind’s ancient past.”

"This is a great compilation. . . . the type of book that makes you question what you have been told and makes you want to discover more for yourself."

"These thoughtful, well-presented and impeccably researched essays form a foundation of history itself, presenting a totally different viepoint of who we are, where we come from, ans why we are here--not to mention where we may be heading."

"Read what researchers have to say about prehistoric technologies, evolution versus creation, earth changes, and even the case for extraterrestrial intervention. Look through the eyes of mystics, scientists, and researchers at the top of their fields and see what they have to say about some of the latest finds and discoveries. . . ."

"Forbidden History brings out why it’s so difficult to accept new ideas and how those with vested interests are firmly entrenched and filter out most everything that might threaten the accepted world view. This book slipped through the cracks."

"The days of secrecy and suppression need to come to an end because challenging deeply entrenched and outdated scientific and religious worldviews are the hallmark of a civilized society evolving toward higher ideals and truth."

"The book serves as an excellent introduction to hitherto suppressed and alternative accounts of history as contributors raise questions about the origins of civilization and humanity, catastrophism, and ancient technology."

"This is an excellent compilation of the work of some of the key thinkers on some very highly charged issues, such as creationism and Darwinism."

Prehistoric Technologies, Extraterrestrial Intervention, and the Suppressed Origins of Civilization