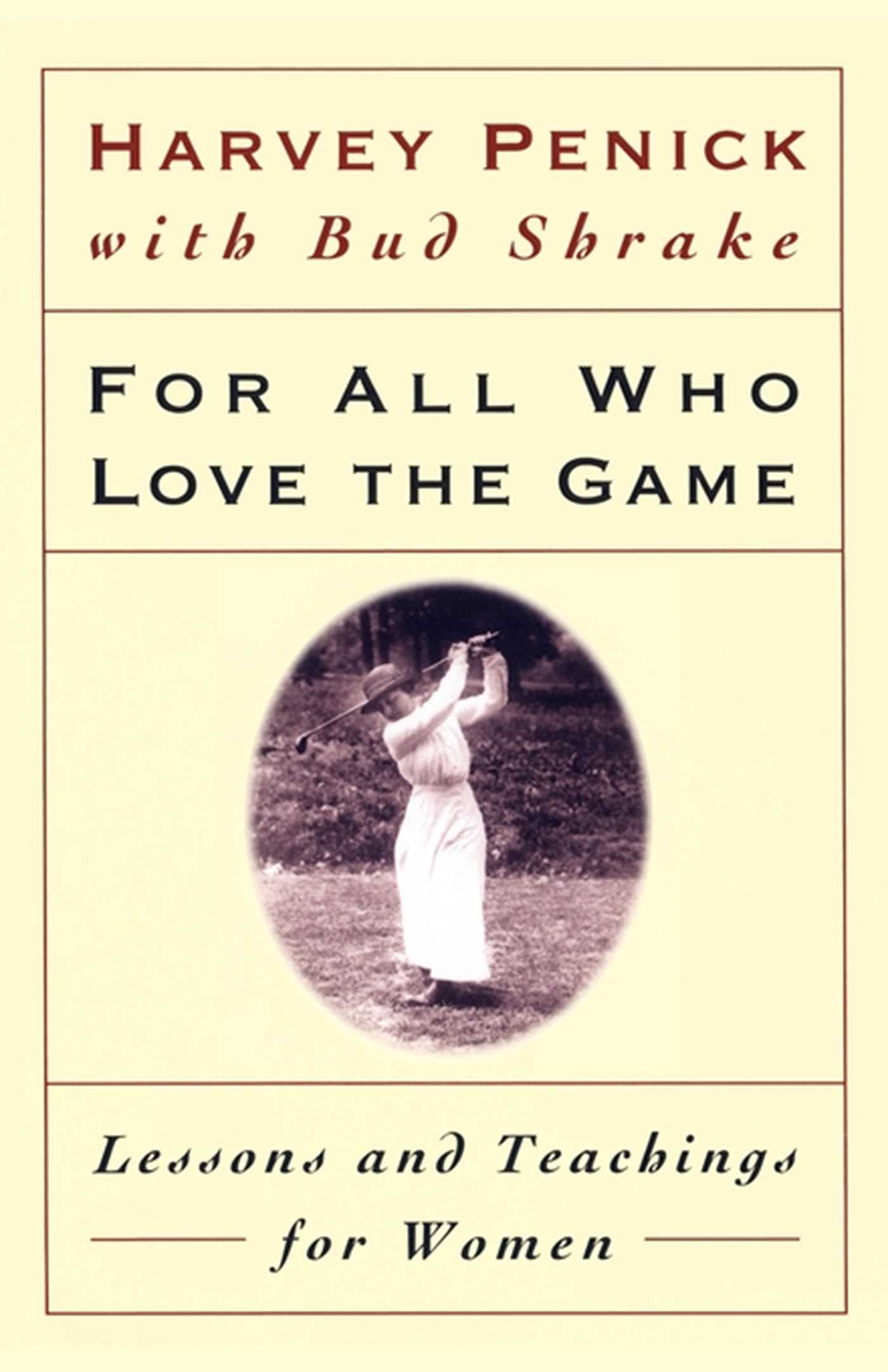 For All Who Love the Game

Lessons and Teachings for Women

By Harvey Penick
With Bud Shrake
LIST PRICE $10.99
PRICE MAY VARY BY RETAILER

EVERY WOMAN CAN PLAY GREAT GOLF

Known in the world of golf as one of the game's greatest teachers, Harvey Penick worked with U.S. Open winners, great champions, and five out of the thirteen women who are members of the LPGA Hall of Fame. Mickey Wright, Sandra Palmer, Betsy Rawls, Kathy Whitworth, Judy Rankin, and Betty Jameson all had the privilege and honor of working with Penick. While he was proud of their success and achievements, Penick took just as much pleasure from the accomplishments of the countless women who came to him hoping only to be able to hit a ball in the air for the very first time.

In For All Who Love the Game, Harvey shares the lessons he's learned from female golfers: techniques to help women gain greater physical and psychological power, advice on the perfect swing, and tips for developing areas of the game where women can and should outplay their male counterparts. Interwoven with Penick's ever-present blend of common sense and insight, For All Who Love the Game is a gift to every woman who wants to enjoy the game of golf to its fullest.

Lessons in the Afternoon

It was early on a hot Saturday afternoon in July. I had already been at the club watching Sandra Palmer hit balls for an hour or so. Now I was back at home in my lounge chair in the living room, feeling sort of achy and drained by the sun.

I thought I would have a bowl of soup and a sandwich for lunch. Then I would read my mail and answer a few letters before the Women's Open appeared on TV in a little while. Sandra was spending the weekend at our house, and she planned to come from the practice range to watch the tournament with me. Watching the Open while sitting with an Open champion like Sandra is a thrill for me. I knew it would pick up my spirits.

But my son, Tinsley, walked in the front door and said, "Dad, we need you at the club."

"A woman needs your help."

"Does it have to be right now?" I asked.

"Dad, she has come a long way and is eager to see you."

Ordinarily what Tinsley had said would have roused me to get into my golf cart and return to the club at once. I could never turn down a woman in distress. On this day, though, with the temperature above one hundred degrees and several things at home I wanted to be doing, it was hard for me to think about moving.

"What seems to be her problem?" I asked.

"She can't get the ball into the air," Tinsley said.

That was all I needed to hear.

Teaching frustrated women golfers to hit the ball into the air is a challenge I love, one that when accomplished brings forth such a roar of joy from both the pupil and the teacher that I get goose bumps that make me feel I'm in the middle of an electrical storm.

An attractive woman was waiting in the practice area when I arrived in my golf cart. She introduced herself as Susan Baker. She said her husband, Jim, was out on the course playing golf. They lived back and forth between Houston and Washington, D.C., she said, but were in Austin to attend a wedding.

What I needed to know first was whether her frustration was caused by the path of her swing or by the angle of her clubface.

Her swing looked pretty good to me, but every ball She hit rolled about thirty yards along the ground.

"I've had a number of lessons, and yet I just keep on doing this," she said.

I looked at her hands on the club. Her grip seemed reasonable. But having seen that her swing was all right, I knew her grip had to be the villain

I asked her to remove her glove and take her grip again.

Sure enough, that is where the culprit lay concealed.

When she took her grip, both hands were pretty much under the handle. But then she twisted her flesh around so that her bad grip was disguised to look like a reasonable grip.

"Would you mind if we back up a little and start over?" I asked.

"Let's forget the word 'grip.' Let's just think about placing your hands on the club. Please let me guide you into placing them. Look at how your hands hang naturally at your sides. Now place your left hand on the handle with a natural feeling so that you can glance down and see three knuckles. That's right. That's how I want it. Leave it just like that, without twisting. Now place your right hand on the handle so that your lifeline in your palm fits against your thumb. That's very good."

I leaned over and touched her left elbow.

"Let go of the tension in your elbows," I said.

I touched her left elbow again.

"Without letting go of the club, allow the tension to go out of your elbows and your shoulders," I said.

I saw her elbows soften. Her shoulders became less rigid.

I clapped my hands with approval.

"Now look at a spot on the grass and make me a nice practice swing, hitting the spot."

Susan made several good-looking practice swings that brushed the grass.

"Now put a tee in the ground," I said. "We don't need a ball yet. Just a tee. Please make me a nice swing and hit that tee. Feel that you are swinging easy, but hit that tee hard enough to cut if off or knock it out of the ground."

After Susan did this half a dozen times, clipping that tee with a good, smooth, full swing, I asked her to put a ball on the tee.

"Now, disregard the ball but go ahead and give that tee a healthy crack," I said.

Susan hit that ball out of my sight. My eyes are not as sharp as they once were, but I could tell she had hit it well over a hundred yards in the air with her 7-iron.

Susan screamed with pleasure. She jumped up and down. She leaped over and kissed me. I was tingling from head to toe.

"I never thought it was possible!" she said. "Let's do it again."

She did it several more times, cutting off the tee with a nice swing, the ball flying out there more than a hundred yards, plenty high with a little tail on it.

I saw a moment of fear in her eyes.

"Trust me," I said. "You know how to do it. Treat this club just as you have been treating the other one."

Well, what do you think happened?

She was astonished. She was so thrilled that tears rushed to her eyes.

"Now, please listen to me," I said. "I want you to remember. What we did here today -- or rather what you did -- it works the same in Houston in or Washington, D.C., as it does at Austin Country Club. Always remember that, and you will be fine from now on."

I asked Susan to enjoy the game of golf to its fullest and please come back and see me anytime she thought she needed me.

"Please give my regards to your husband," I said.

Driving me home in my golf cart, Tinsley said, "Do you know who her husband is?"

"Her husband is James Baker. He was secretary of state and chief of staff for President Bush."

I am not a political person, but I do have a soft spot for President Bush. He wrote me a letter about golf and life that he hand typed himself. His letter is framed on the wall of my little bedroom at the front of the house. In the middle of the night when pain keeps me awake, I often look at that letter and pinch myself to be sure it's real, that a president sat down and typed a letter to a grown caddie.

Back at the house, Sandra was watching the Open on television. As I settled into my lounge chair again, Sandra caught me up on what had been happening.

The Swedish star Helen Alfredsson had started the Saturday round with a big lead on the field. But her game was faltering.

As I began watching, she was in the struggle of losing eight strokes to par in ten holes. It was painful to see. I felt sorry for her. Such things happen to even the best players, and all golfers know it. But still my heart went out to this handsome young woman who has so much talent.

All of a sudden, with several holes yet to play, the television network cut short my suffering on Helen Alfredsson's behalf, as well as what joy I would be receiving from the rise of Patty Sheehan and other fine players in the Women's Open -- and my pleasure at listening to the TV commentary by Judy Rankin, who used to be a pupil of mine.

A man's voice on the television told us they were leaving the Women's Open because their time was up. The network switched to some kind of track meet in Russia.

"Do you think they would do that if this was the Men's Open?" Sandra said. "What if some prominent man player was losing a big lead, and some other prominent men players were making a charge? Would the network switch away to a track meet that was taped earlier in another country? Would they dare do that to men?"

"You know darn well they wouldn't," Sandra said. She headed toward the door.

"I'm going back to the practice tee," she said. "They won't let me watch the Women's Open, but they can't stop me from practicing."

So I read my mail and answered letters. It was too hot for anything else. But I felt better now than when I came home earlier in the day.

Remembering Susan Baker's cry of pleasure when she saw that ball fly out there 170 yards, I kept smiling. Moments like that make my life fulfilled.

And if enough Susan Bakers find joy and satisfaction in the great game of golf, maybe someday that network will treat the world's finest women players with the same respect it reserves for men.

Harvey Penick lives in Austin, Texas, with his wife Helen. This is his first book.

For All Who Love the Game

Lessons and Teachings for Women

By Harvey Penick
With Bud Shrake
LIST PRICE $10.99
PRICE MAY VARY BY RETAILER