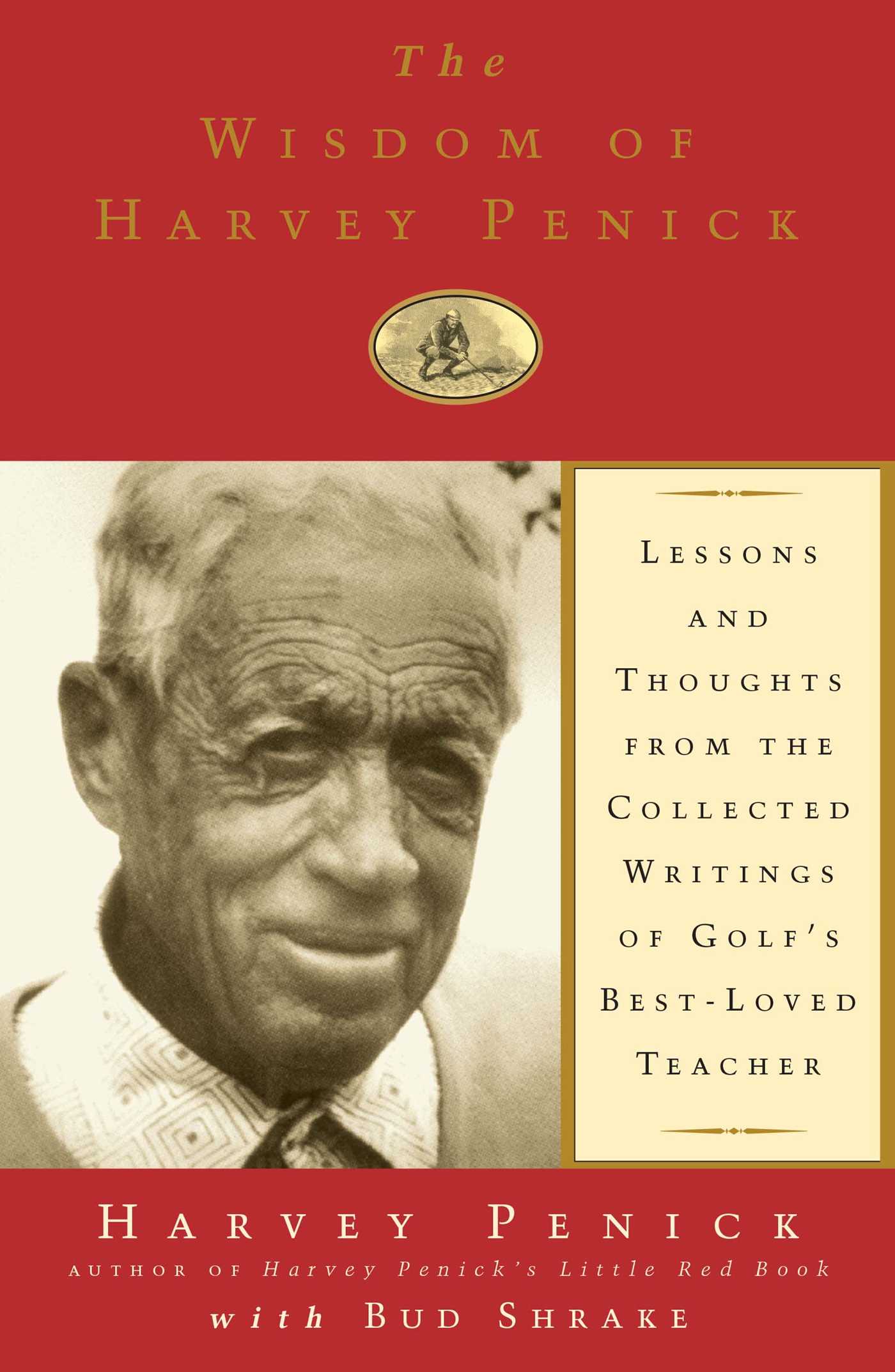 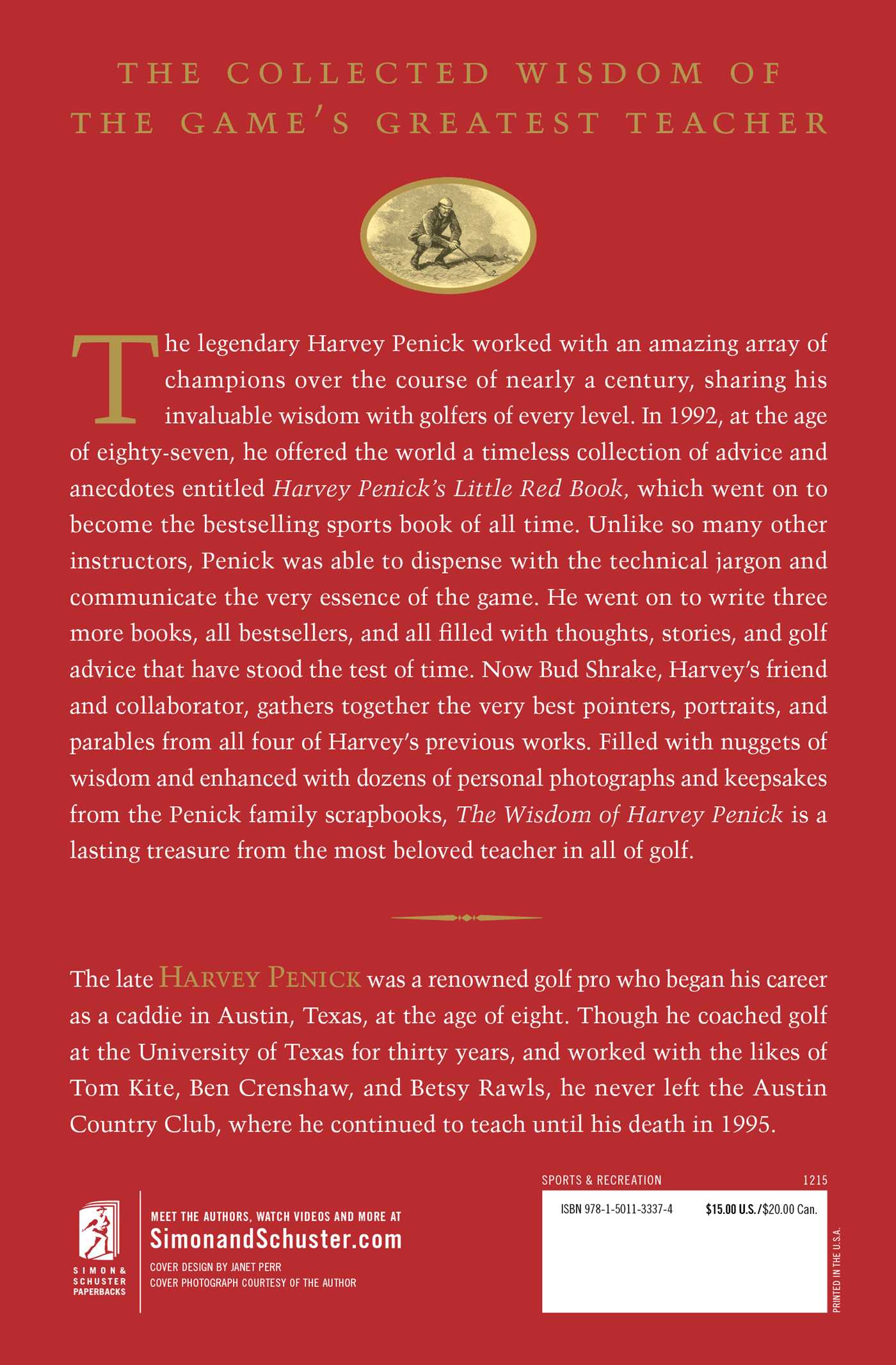 The Wisdom of Harvey Penick

The Wisdom of Harvey Penick My Little Red Book


AN OLD PRO told me that originality does not consist of saying what has never been said before; it consists of saying what you have to say that you know to be the truth.

More than sixty years ago, I began writing notes and observations in what I came to call my Little Red Book. Until recently I had never let anyone read my Little Red Book except my son, Tinsley. My wife, Helen, could have read it, of course, but a lifetime spent living with a grown-up caddie like me provided Helen with all the information about golf that she cares to know.

My intention was to pass my Little Red Book on to Tinsley, who is the head professional at Austin Country Club. Tinsley was named to that post in 1973, when I retired with the title of Head Professional Emeritus after holding the job for fifty years.

With the knowledge in this little book to use as a reference, it would be easier for Tinsley to make a good living teaching golf no matter what happens when I am gone.

Tinsley is a wonderful teacher on his own and has added insights to this book over the years. But there is only one copy of the red Scribbletex notebook that I wrote in. I kept it locked in my briefcase. Most of my club members and the players who came to me for help heard about my Little Red Book as it slowly grew into what is still a slender volume considering that all the important truths I have learned about golf are written in its pages.

Many asked to read the book. I wouldn’t show it to Tommy Kite, Ben Crenshaw, Betsy Rawls, Kathy Whitworth, Betty Jameson, Sandra Palmer, or any of the others, no matter how much I loved them.

What made my Little Red Book special was not that what was written in it had never been said before. It was that what it says about playing golf has stood the test of time.

I see things written about the golf swing that I can’t believe will work except by accident. But whether it is for beginners, medium players, experts, or children, anything I say in my book has been tried and tested with success.

One morning last spring I was sitting in my golf cart under the trees on the grass near the veranda at Austin Country Club. I was with my nurse, Penny, a patient young woman who drives us in my golf cart a few blocks from home to the club on days when I feel well enough for the journey.

I don’t stay more than an hour or two on each visit, and I don’t go more than three or four times a week because I don’t want the members to think of me as a ghost that refuses to go away.

I don’t want to cut into the teaching time of any of our fine club professionals, either. I can see Jackson Bradley out teaching on the practice line, and there are moments when I might want to make a suggestion, but I don’t do it.

However, I can’t refuse to help when my old friend Tommy Kite, the leading money winner in the history of the game, walks over to my golf cart and asks if I will watch him putt for a while. Tommy asks almost shyly, as if afraid I might not feel strong enough. His request makes my heart leap with joy.

I spend nights staring at the ceiling, thinking of what I have seen Tommy doing in tournaments on television, and praying that he will come see me. If Tommy wants, I will break my rule that I never visit the club on weekends, and will have Penny drive me to the putting green to meet with Tommy on Saturday and Sunday morning, as well as on Thursday and Friday. I know it exasperates Penny that I would rather watch Tommy putt than eat the lunch she has to force on me.

Or I may be sitting in my cart in the shade enjoying the spring breeze and the rolling greenery of our beautiful golf course, with the blue water of Lake Austin sparkling below, as good and peaceful a place as I know on this earth, and the young touring pro Cindy Figg-Currier may stop and say hello and eventually work up the nerve to ask if I will look at her putting stroke.

Certainly I will. I get as much pleasure out of helping a rising young pro like Cindy as I do a celebrated hero like Tommy.

Don Massengale of the Senior Tour had phoned me at home the night before for a long-distance putting lesson. I can’t hear very well on the phone, and Helen had to interpret, shouting back and forth as I tried to straighten out Don’s grip.

Earlier my old friend Ben Crenshaw, the Masters champion who had grown up with Tommy Kite in the group of boys that I taught at the old Austin Country Club across town, dropped by our home for a visit and brought his wife and daughter to see Helen and me. Ben is one of the greatest players of all time, a natural. When he was a boy I wouldn’t let him practice too much for fear that he might find out how to do something wrong. Ben has his own course, designed by Ben and his partner, at the Barton Creek Country Club layout, a ten-minute drive away from us. It pleases me deeply when Ben drops by to sit on the couch or when he phones me from some tournament.

Ben hasn’t been gone long before the doorbell rings and it’s one of our members, Gil Kuykendall, who brings Air Force General Robin Olds into the living room and asks if I will give the general a lesson on the rug from my wheelchair. They are entered in a tournament, and the general has played golf only a few times. Can I teach him? In the living room? In half an hour?

General Olds is a jolly good fellow, thick through the chest. He was a football star at West Point. He has those big muscles that, as Bobby Jones said, can bend a bar but are no use in swinging a golf club.

I fit the general with a strong grip and teach him a very short swing. Just about waist high to waist high. This man is too muscle-bound to make a full swing, but he is strong enough to advance the ball decently with a short swing. He may not break 100 in the tournament, but he will make it around the golf course.

When the member and the general leave, Helen and Penny scold me. I am wearing myself out, they say. They remind me that before Ben dropped by, a girl who is hoping to make the University of Texas team had come to talk to me about her progress, and I had asked questions for an hour.

It’s true that I have grown tired as the day became evening. But my mind is excited. My heart is thrilled. I have been teaching. Nothing has ever given me greater pleasure than teaching. I received as much joy from coaxing a first-time pupil, a woman from Paris, into hitting the ball into the air so that she could go back to France and play golf with her husband as I did from watching the development of all the fine players I have been lucky enough to know.

When one of my less talented pupils would, under my guidance, hit a first-class shot, I would say, “I hope that gives you as much pleasure as it does me.” I would get goose pimples on my arms and a prickly feeling on my neck from the joy of being able to help.

Every time I found something about the swing or the stance or the mental approach that proved to be consistently successful, I wrote it down in my Little Red Book.

Occasionally I added impressions of champions I have known, from Walter Hagen and Bobby Jones to Ben Hogan, Byron Nelson, and Sam Snead to Jack Nicklaus and Arnold Palmer to Kite and Crenshaw, as well as Rawls, Whitworth, Jameson, Mickey Wright, Sandra Palmer, and many other distinguished players.

I prefer to teach with images, parables, and metaphors that plant in the mind the seeds of shotmaking. These, too, went into the notebook—if they proved successful.

Many professional writers inquired during my long career as a teacher if they might write a book for me on how to play golf.

I always politely declined. For one thing, I never regarded myself as any kind of genius. I was a humble student and teacher of the game. What I was learning was not for the purpose of promoting myself in the public eye. I was never interested in money. What I was learning was to be shared only with my pupils, and ultimately the knowledge would belong to my son, Tinsley, and my daughter, Kathryn.

But on this soft spring morning that I mentioned earlier, with squirrels playing in the grass around the wheels of my cart, and a shiny black grackle prowling in the branches above me, I was sitting there wondering if I was being selfish.

Maybe it was wrong to hoard the knowledge I had accumulated. Maybe I had been granted these eighty-seven years of life and this wonderful career in order that I should pass on to everyone what I had learned. This gift had not been given me to keep secret.

A writer, Bud Shrake, who lives in the hills near the club, came to visit with me under the trees on this particular morning.

Penny gave Bud her seat in my cart. We chatted a few minutes about his brother, Bruce, who was one of my boys during the thirty-three years I was the golf coach at the University of Texas. Then it burst out of me.

“I want to show you something that nobody except Tinsley has ever read,” I said.

I unlocked my briefcase and handed him my Little Red Book.

I asked if he might help me get it in shape to be published.

Bud went into the golf shop and brought Tinsley out to my cart.

I asked Tinsley if he thought we should share our book with a larger crowd than the two of us.

Tinsley had a big grin on his face.

“I’ve been waiting and hoping for you to say that,” he said.

So that morning under the trees we opened my Little Red Book.
Harvey Penick

Harvey Penick lives in Austin, Texas, with his wife Helen. This is his first book. 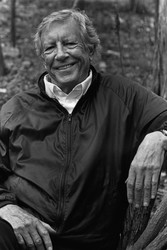 The Wisdom of Harvey Penick