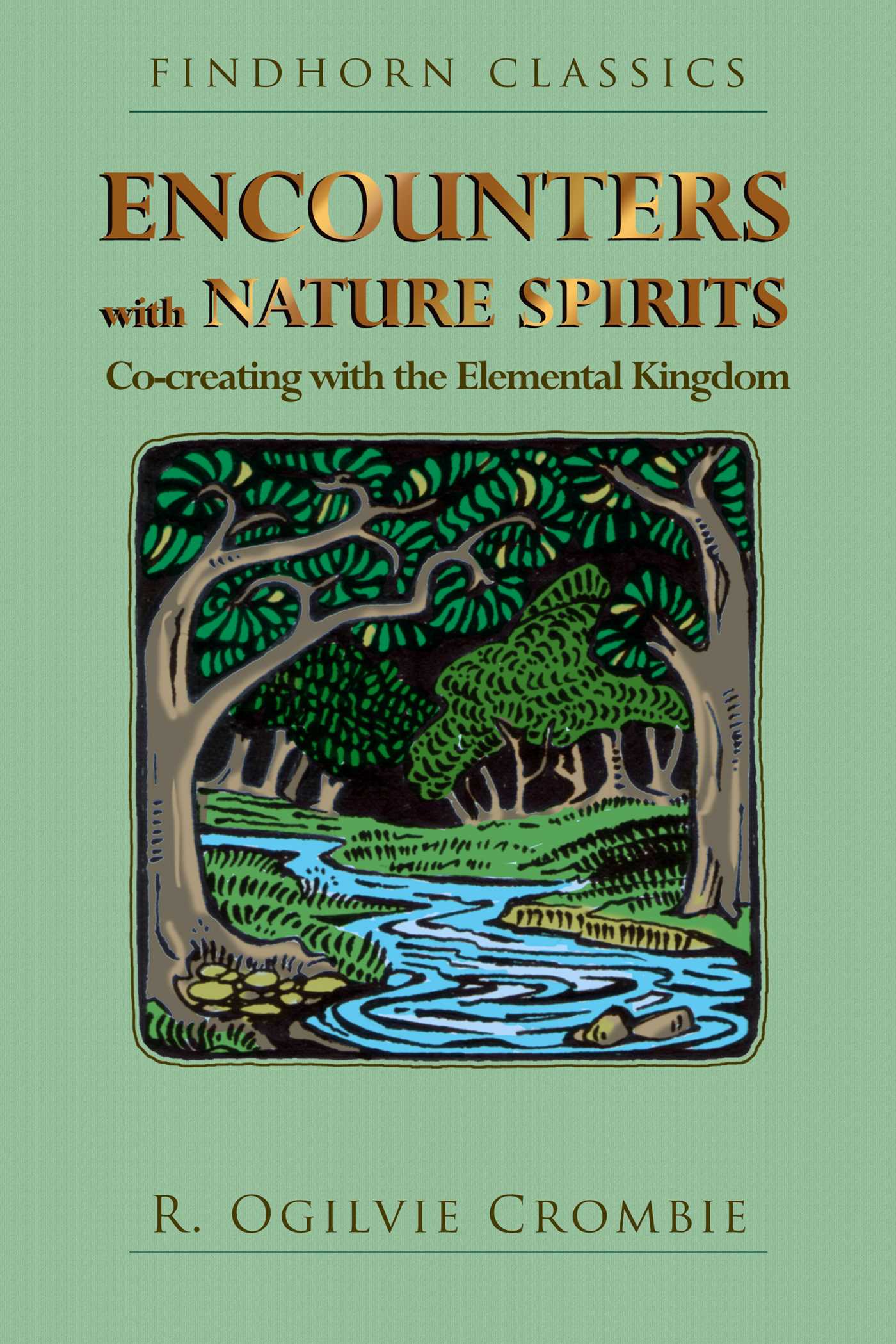 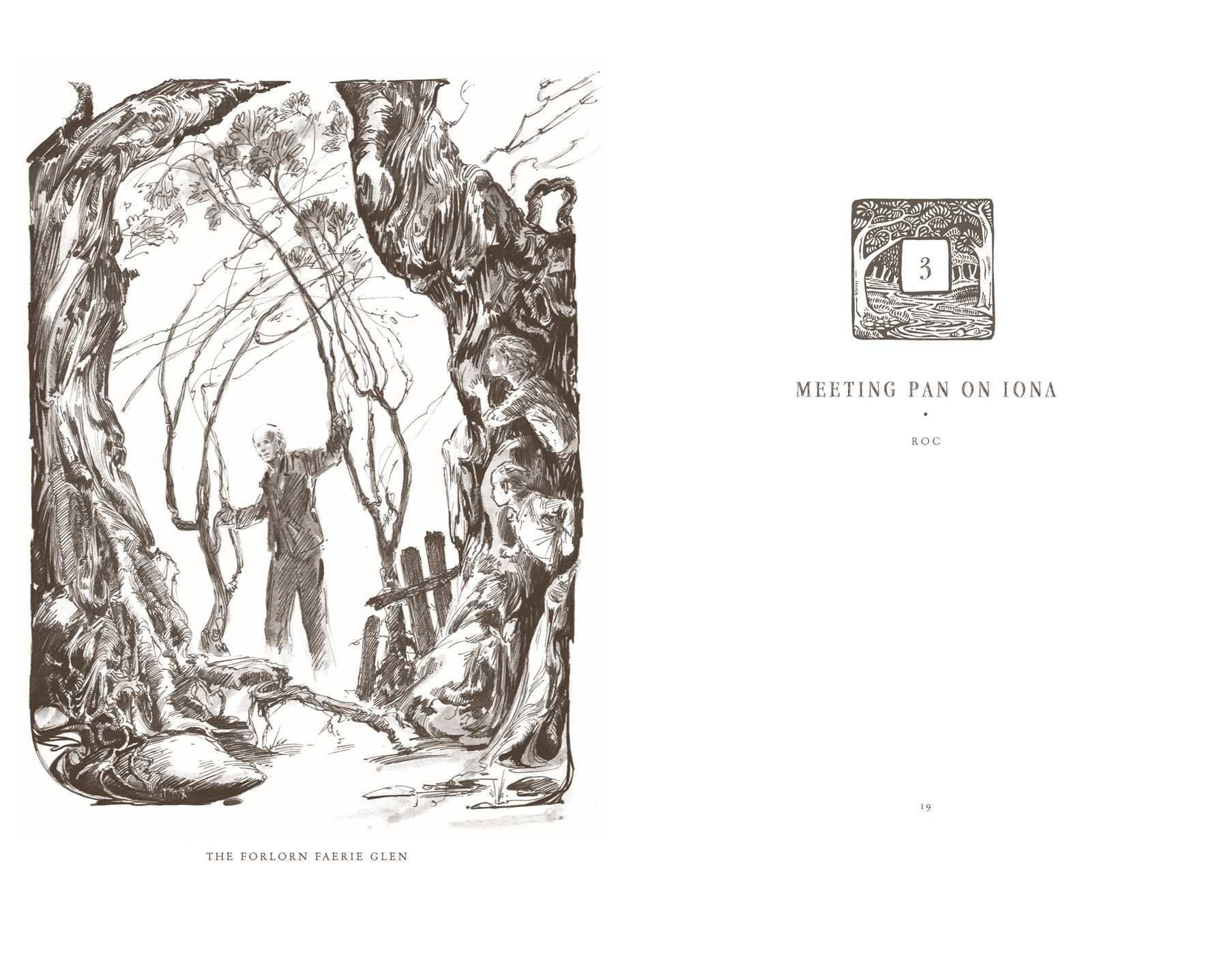 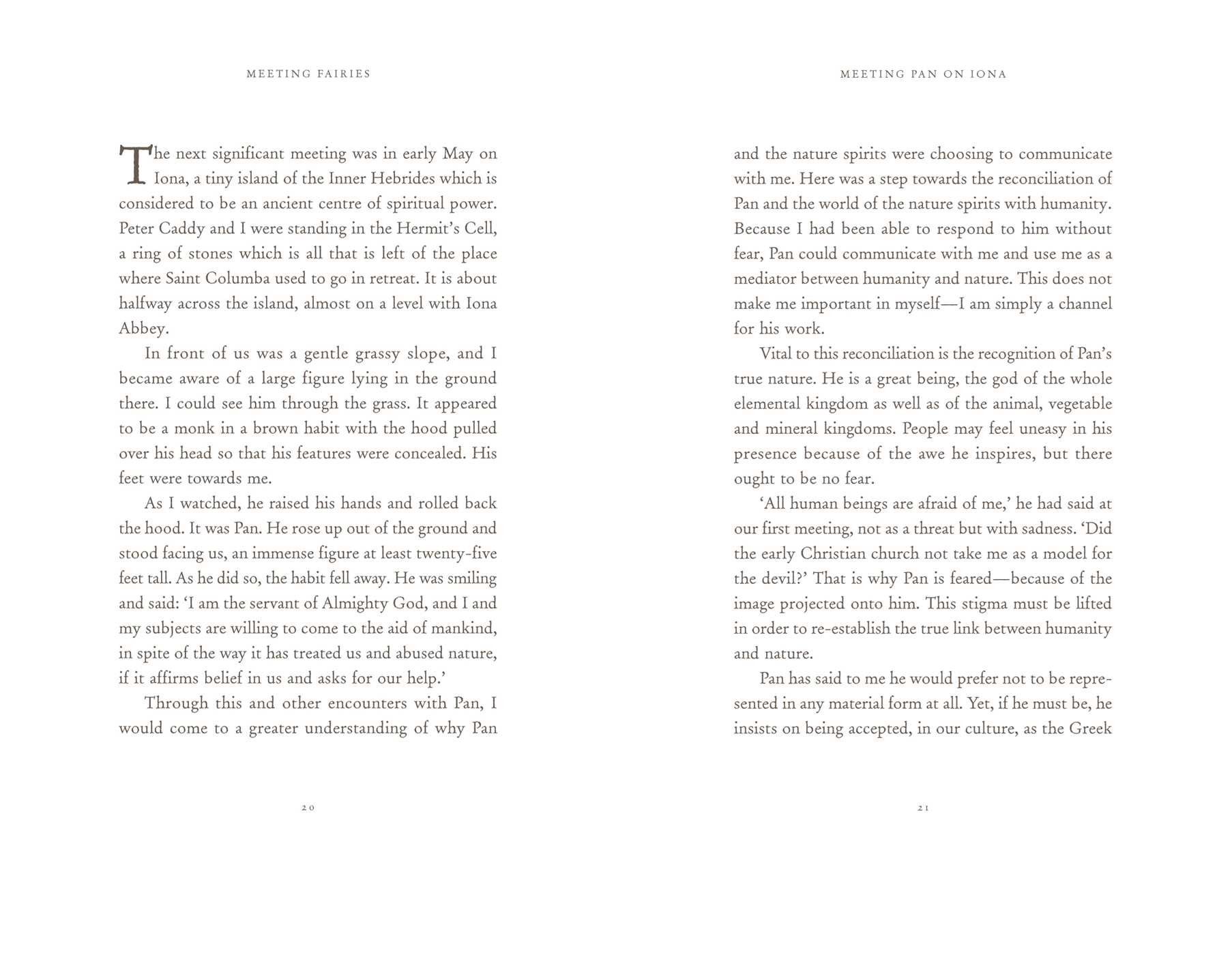 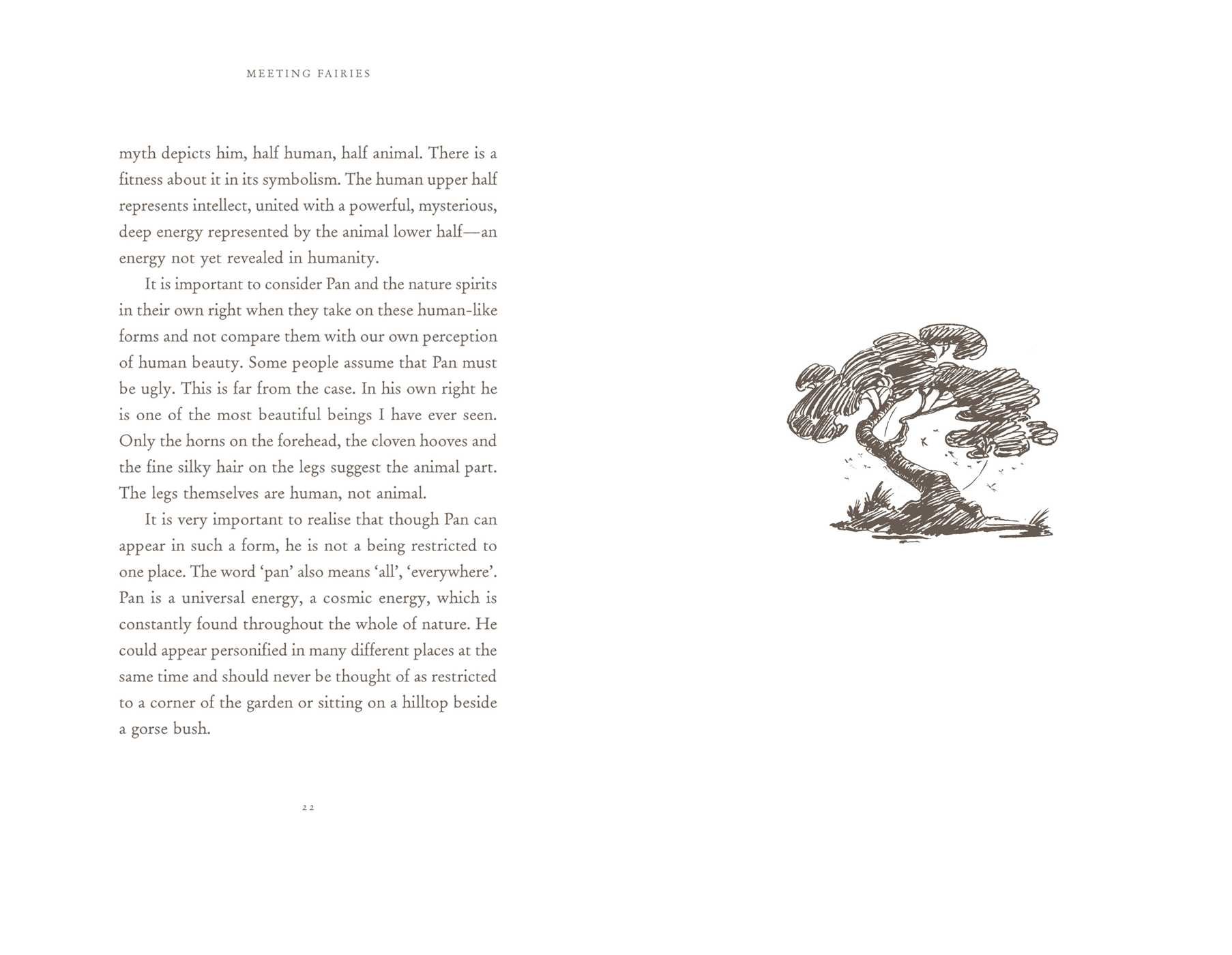 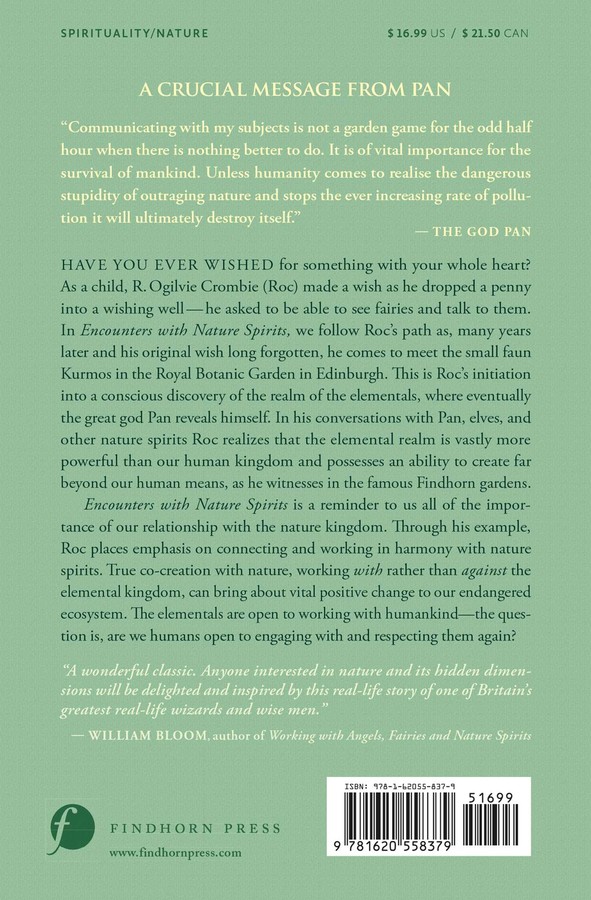 A fascinating, first-hand account of the vast powers and true nature of the Elemental Kingdom

• Reveals deep wisdom, eloquently shared through the author’s encounters with the great God Pan and his elemental subjects

• Includes chapters by Mike Scott, David Spangler, Dorothy Maclean, and Brian Nobbs as well as beautiful illustrations by fine artist Elise Hurst, who perfectly captures the energy of the natural world and its subjects as we might perceive them

“To anyone who may have expressed a wish to see and talk to nature spirits . . . remember it took 63 years for my wish to be granted, so don’t lose hope.”

Have you ever wished for something with your whole heart? As a child, R. Ogilvie Crombie (Roc) made a wish as he dropped a penny into a wishing well - he asked to be able to see fairies and talk to them. In Encounters with Nature Spirits, we follow Roc’s path as, many years later, he meets the faun Kurmos in the Royal Botanic Garden in Edinburgh, discovers the realm of the elementals, and, eventually, meets the great god Pan himself. In his conversations with Pan, elves, and other nature spirits Roc realizes that the elemental realm is vastly more powerful than our human kingdom and possesses an ability to create far beyond our human means.

Through his experiences Roc becomes closely involved with the Findhorn Community in northeast Scotland where he meets further elementals who give him sound advice as to how the famous Findhorn gardens should be cared for in order to work in harmony with nature.

Encounters with Nature Spirits is a reminder to us all of the importance of our relationship with the nature kingdom. Through his example, Roc places emphasis on connecting and working in harmony with nature spirits. True co-creation with nature, working with rather than against the elemental kingdom, can bring about vital positive change to our endangered eco-system. The elementals are open to working with mankind--the question is, are we humans open to engaging with and respecting them again?

The next significant meeting was in early May on Iona, a tiny island of the Inner Hebrides which is considered to be an ancient centre of spiritual power. Peter Caddy and I were standing in the Hermit’s Cell, a ring of stones which is all that is left of the place where Saint Columba used to go in retreat. It is about halfway across the island, almost on a level with Iona Abbey.

In front of us was a gentle grassy slope, and I became aware of a large figure lying in the ground there. I could see him through the grass. It appeared to be a monk in a brown habit with the hood pulled over his head so that his features were concealed. His feet were towards me.

As I watched, he raised his hands and rolled back the hood. It was Pan. He rose up out of the ground and stood facing us, an immense figure at least twenty-five feet tall. As he did so, the habit fell away. He was smiling and said: ‘I am the servant of Almighty God, and I and my subjects are willing to come to the aid of mankind, in spite of the way it has treated us and abused nature, if it affirms belief in us and asks for our help.’

Through this and other encounters with Pan, I would come to a greater understanding of why Pan and the nature spirits were choosing to communicate with me. Here was a step towards the reconciliation of Pan and the world of the nature spirits with humanity. Because I had been able to respond to him without fear, Pan could communicate with me and use me as a mediator between humanity and nature. This does not make me important in myself--I am simply a channel for his work.

Vital to this reconciliation is the recognition of Pan’s true nature. He is a great being, the god of the whole elemental kingdom as well as of the animal, vegetable and mineral kingdoms. People may feel uneasy in his presence because of the awe he inspires, but there ought to be no fear.

‘All human beings are afraid of me,’ he had said at our first meeting, not as a threat but with sadness. ‘Did the early Christian church not take me as a model for the devil?’ That is why Pan is feared--because of the image projected onto him. This stigma must be lifted in order to re-establish the true link between humanity and nature.

Pan has said to me he would prefer not to be represented in any material form at all. yet, if he must be, he insists on being accepted, in our culture, as the Greek myth depicts him, half human, half animal. There is a fitness about it in its symbolism. The human upper half represents intellect, united with a powerful, mysterious, deep energy represented by the animal lower half--an energy not yet revealed in humanity.

It is important to consider Pan and the nature spirits in their own right when they take on these human-like forms and not compare them with our own perception of human beauty. Some people assume that Pan must be ugly. This is far from the case. In his own right he is one of the most beautiful beings I have ever seen. Only the horns on the forehead, the cloven hooves and the fine silky hair on the legs suggest the animal part. The legs themselves are human, not animal.

It is very important to realise that though Pan can appear in such a form, he is not a being restricted to one place. The word ‘pan’ also means ‘all’, ‘everywhere’. Pan is a universal energy, a cosmic energy, which is constantly found throughout the whole of nature. He could appear personified in many different places at the same time and should never be thought of as restricted to a corner of the garden or sitting on a hilltop beside a gorse bush.

It may be helpful to consider why Pan and the nature spirits assume such forms. Their primary state is what may be termed a ‘light body’. It is a whirl or vortex of energy in constant motion. Nebulous like a fine mist, it glows with coloured light, sometimes one single colour, sometimes two or more which do not mix but remain separate like the colours of a rainbow. It frequently changes colour and is often covered with a multitude of fine curved lines, which appear to flow like liquid in a pipe, forming continually changing patterns of incredible beauty.

These light bodies differ from each other in size and brilliancy, varying from pastel shades to strong, bright colours. All are beautiful, pure and luminous, glowing with inner radiance. They may be regarded as whirls of energy, but energy with intelligence. It is possible to see and to communicate with these light bodies.

However, the elementals or nature spirits cannot carry out their work with plants in these pure bodies. In this work they use the energies channelled to them by the devas to build up an ‘etheric body’ or ‘etheric counterpart’ for each plant, according to its archetypal pattern. The plant grows and develops within this counterpart. In order to fulfil their task, the nature spirits too must take on an etheric body.

In esoteric knowledge, the etheric plane is made up of a fine energy substance from which is created the mould for every form we see manifest on the physical plane. Each material form has an etheric counterpart. That such a thing exists at all will be questioned by many people. At the moment it cannot be scientifically proven, though no doubt this will be possible in the future. We do know ourselves to be far more than just our physical bodies.
R. Ogilvie Crombie

Trained as a scientist in his early years, R. Ogilvie Crombie (Roc) (1899-1975) was a self-taught mythologist, psychologist, historian, and esotericist. A thespian at heart, he also displayed great interest in the fine arts, music, and theatre. Roc lived in and around Edinburgh and had a close connection to the Findhorn Community, Scotland.

“A wonderful classic. Anyone interested in nature and its hidden dimensions will be delighted and inspired by this real-life story of one of Britain’s greatest real-life wizards and wise men.”

"Bringing forth a positive message of change and cooperation with the spirits of the elemental kingdoms and the ecology of Mother Earth herself, Encounters with Nature Spirits is a fell-good memoir ideal for a quite read at home before the ire, or deep in the middle of the woods."