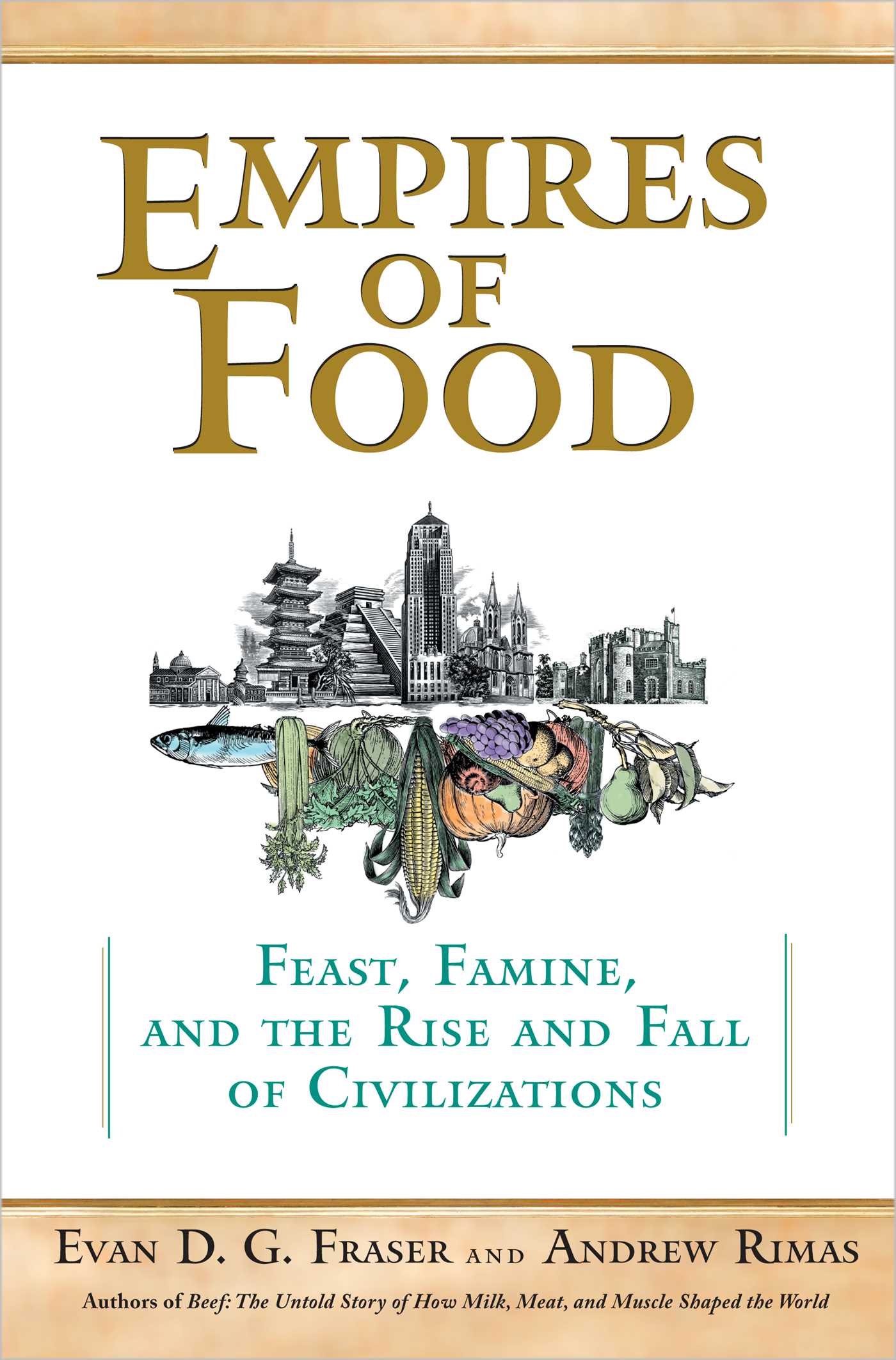 Feast, Famine, and the Rise and Fall of Civilizations

By Andrew Rimas and Evan Fraser
LIST PRICE $17.99
PRICE MAY VARY BY RETAILER

We are what we eat: this aphorism contains a profound truth about civilization, one that has played out on the world historical stage over many millennia of human endeavor.

Using the colorful diaries of a sixteenth-century merchant as a narrative guide, Empires of Food vividly chronicles the fate of people and societies for the past twelve thousand years through the foods they grew, hunted, traded, and ate—and gives us fascinating, and devastating, insights into what to expect in years to come. In energetic prose, agricultural expert Evan D. G. Fraser and journalist Andrew Rimas tell gripping stories that capture the flavor of places as disparate as ancient Mesopotamia and imperial Britain, taking us from the first city in the once-thriving Fertile Crescent to today’s overworked breadbaskets and rice bowls in the United States and China, showing just what food has meant to humanity.

Cities, culture, art, government, and religion are founded on the creation and exchange of food surpluses, complex societies built by shipping corn and wheat and rice up rivers and into the stewpots of history’s generations. But eventually, inevitably, the crops fail, the fields erode, or the temperature drops, and the center of power shifts. Cultures descend into dark ages of poverty, famine, and war. It happened at the end of the Roman Empire, when slave plantations overworked Europe’s and Egypt’s soil and drained its vigor. It happened to the Mayans, who abandoned their great cities during centuries of drought. It happened in the fourteenth century, when medieval societies crashed in famine and plague, and again in the nineteenth century, when catastrophic colonial schemes plunged half the world into a poverty from which it has never recovered. And today, even though we live in an age of astounding agricultural productivity and genetically modified crops, our food supplies are once again in peril.

Empires of Food brilliantly recounts the history of cyclic consumption, but it is also the story of the future; of, for example, how a shrimp boat hauling up an empty net in the Mekong Delta could spark a riot in the Caribbean. It tells what happens when a culture or nation runs out of food—and shows us the face of the world turned hungry. The authors argue that neither local food movements nor free market economists will stave off the next crash, and they propose their own solutions. A fascinating, fresh history told through the prism of the dining table, Empires of Food offers a grand scope and a provocative analysis of the world today, indispensable in this time of global warming and food crises. 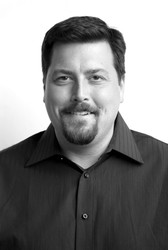 Andrew Rimas is a journalist and the managing editor at the Improper Bostonian magazine; previously he was an associate editor and staff writer at Boston magazine. His work has frequently appeared in those publications, and in The Boston Globe Magazine and The Boston Globe. 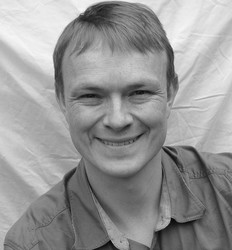 Courtesy of the Author
Evan Fraser

Evan Fraser is an adjunct professor of geography at the University of Guelph in Ontario, Canada and a Senior Lecturer at the School of Earth and Environment at the University of Leeds in the UK. His research is on farming, climate change and the environment. He lives in the Yorkshire Dales with his wife and three children.

"A panoramic overview of the vulnerability of global food networks to climate change....draws important lessons from the past....Though the topic is serious, the authors provide plenty of enlightening stories, including the adventures of a 16th-century Italian merchant who spent 15 years circumnavigating the globe, and the work of St. Benedict of Nursia, who established a network of monasteries that became "a nucleus of industry and food production," producing agricultural surpluses, creating commercial networks and promoting technological advances such as iron plows and the use of oxen. Spanning the whole of human civilization, this is a compelling read for foodies, environmentalists and social and economic historians." --Kirkus

"With a flavor of Jared Diamond, Empires of Food thoughtfully weaves the religion, military history, and science into a historical arc of how food undergirds civilization's rise and fall. Sprinkling discussions of monks and bird guano in with the Roman Empire and colonization, the book elucidates the inherent instability of how our current food infrastructure has evolved and will make you rethink how you eat."
--Jennifer 8. Lee, author of The Fortune Cookie Chronicles

"Evan Fraser and Andrew Rimas vividly recreate centuries of spice-filled ships and grain silos to show that while the pen and the gun may be the visible tools of diplomacy, the knife and fork are often the true instruments of human change. Their unsentimental march through our history and into the future reaches a conclusion that is both inspiring and unnerving: civilization is what we eat."
--Sasha Issenberg, author of The Sushi Economy: Globalization and the Making of a Modern Delicacy

"Empires of Food deals with a subject of grave importance and profound implications for the political economy of the world. Although the subject is serious, it is written in a compelling and readable style. While not pedantic or ponderous in any way, it is of impressive academic rigor. This book needs to be read and thoughtfully considered by policy-makers and citizens everywhere. And if you enjoy lunch, don't fail to read it!"
--John Manley, former Deputy Prime Minister of Canada

"With a breathtaking sweep, Empires of Food takes us on a rollicking culinary journey through the ecological history of civilization. The result is a rare treat: hard-hitting analysis cooked to read like a captivating novel. For pure pleasure or a deeper understanding of why civilizations rise and fall, it's a perfect choice for any curious mind."
--Peter Dauvergne, Professor and Canada Research Chair at the University of British Columbia, author of The Shadows of Consumption

"This isn't just first class scholarship, it's energetic writing. Fraser and Rimas have a knack for the little detail that unveils the big thought. Empires of Food is a must-read for anyone who wants to know why every night a billion people got to bed obese and another billion go to bed hungry."
--George Alagiah, author of A Passage To Africa and A Home From Home

"Empires of Food is a panoramic and prescient book which presents the challenges that civilizations have faced with agricultural production and societal fashions for food. The authors approach the issue with refreshing pragmatism and urge us to move towards a "glocal" approach to consumption norms. Their compelling narrative recognizes the value of efficient global food systems while also appreciating the importance of local connections to reduce ecological impacts. Such a vision for our palates holds much promise in balancing the debate on food ethics and sustainable development."
--Saleem H. Ali, author of Treasures of the Earth: Need, Greed and a Sustainable Future

“In offering a compelling portrait of the interplay between imperial expansion and food systems across the millennia, Empires of Food lays before us the fragility of a 21st century food system beset by climate change, rising fuel costs and a shrinking agricultural frontier and wonders whether, like the empires of the past, we will sustain a delusion of a superabundance as we careen toward a world of famine and insecurity or whether we will we find the wisdom and the means to avert catastrophe.”

"Forget the old stages of human history, the familiar stone, bronze, iron age sequence: University of Guelph geographer Fraser and journalist co-author Rimas make a convincing case that food—or rather, food surpluses—best explain the rise and fall of civilizations. If cultures produce more than farmers eat, and find a way to store, transport and exchange that extra, then urban centres can flourish. Trouble is, food empires have always, so far, grown to the limits of their carrying capacity, hanging on precariously until the weather changes or pests strike, and the whole thing collapses. It’s happened everywhere, as Fraser and Rimas demonstrate in their entertaining tour of past disasters. And maybe it’s happening again: in five of the past 10 years the world has eaten more than it has produced, causing us to draw down on our grain stocks. There may yet be a lot more food to wring out of technological progress; then again, there may not be." --Mclean's

"This is a book with a big thesis and panorama. Whether writing about ancient Rome, the Mayans, China, or mediaeval Europe, 19th century Britain and 20th century USA, the authors draw us inexorably to question whether the 21st century globalizing food system is poised to be punished for forgetting the laws of ecology. Fraser and Rimas propose that seemingly impregnable societies can falter and fail if they ignore the sustainability of their food supplies." --Tim Lang, Professor of Food Policy, City University, London

Feast, Famine, and the Rise and Fall of Civilizations

By Andrew Rimas and Evan Fraser
LIST PRICE $17.99
PRICE MAY VARY BY RETAILER