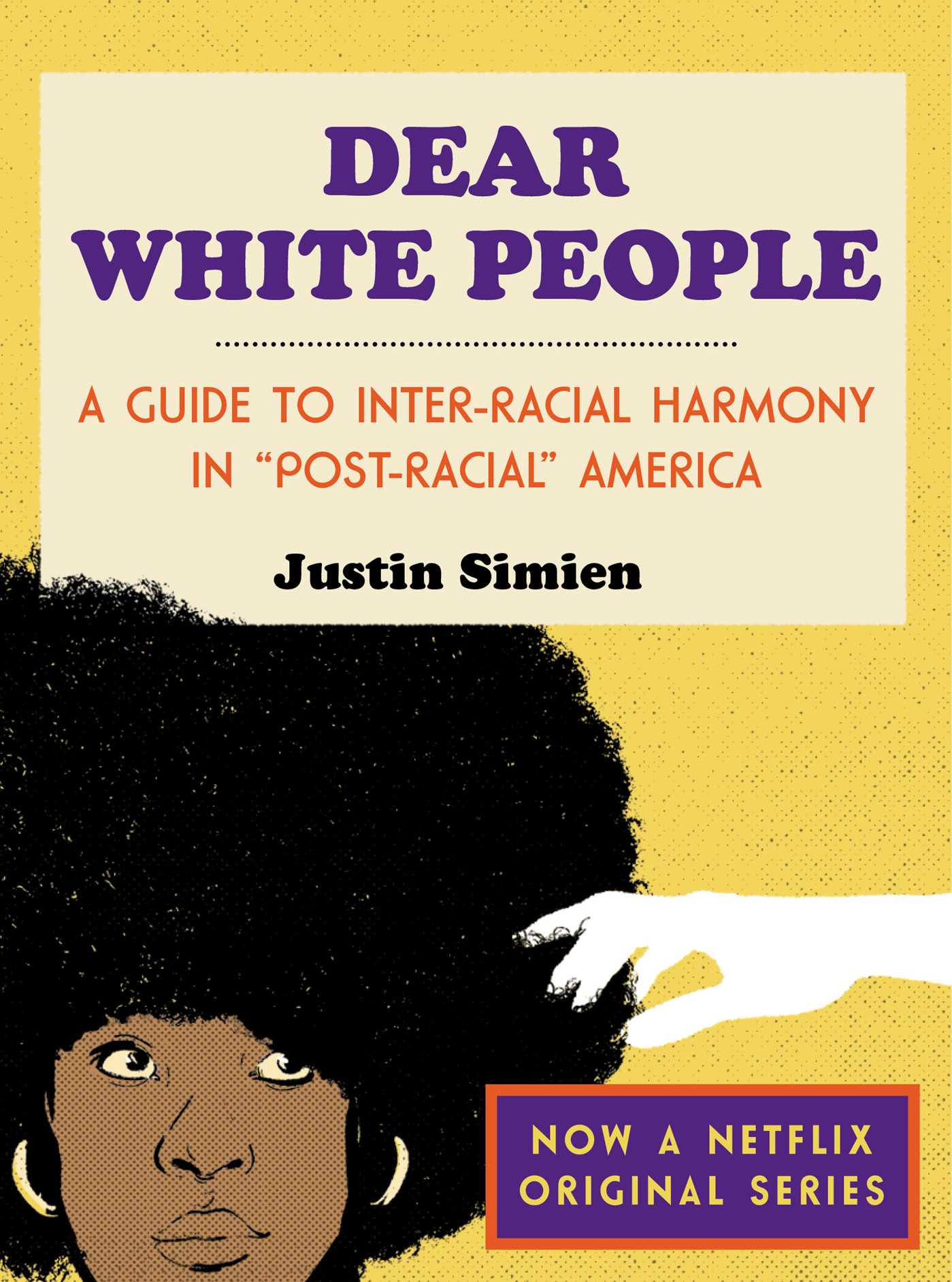 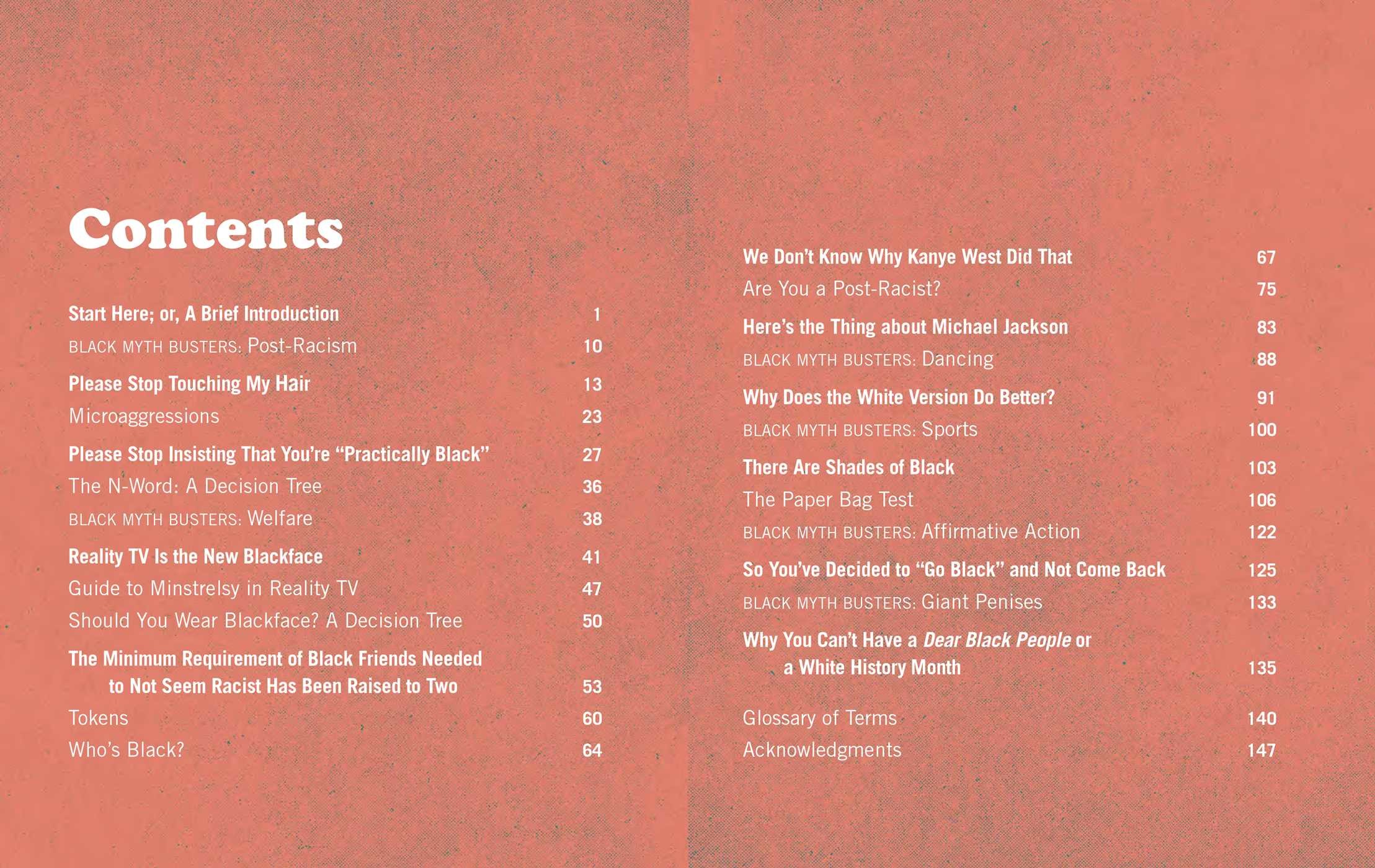 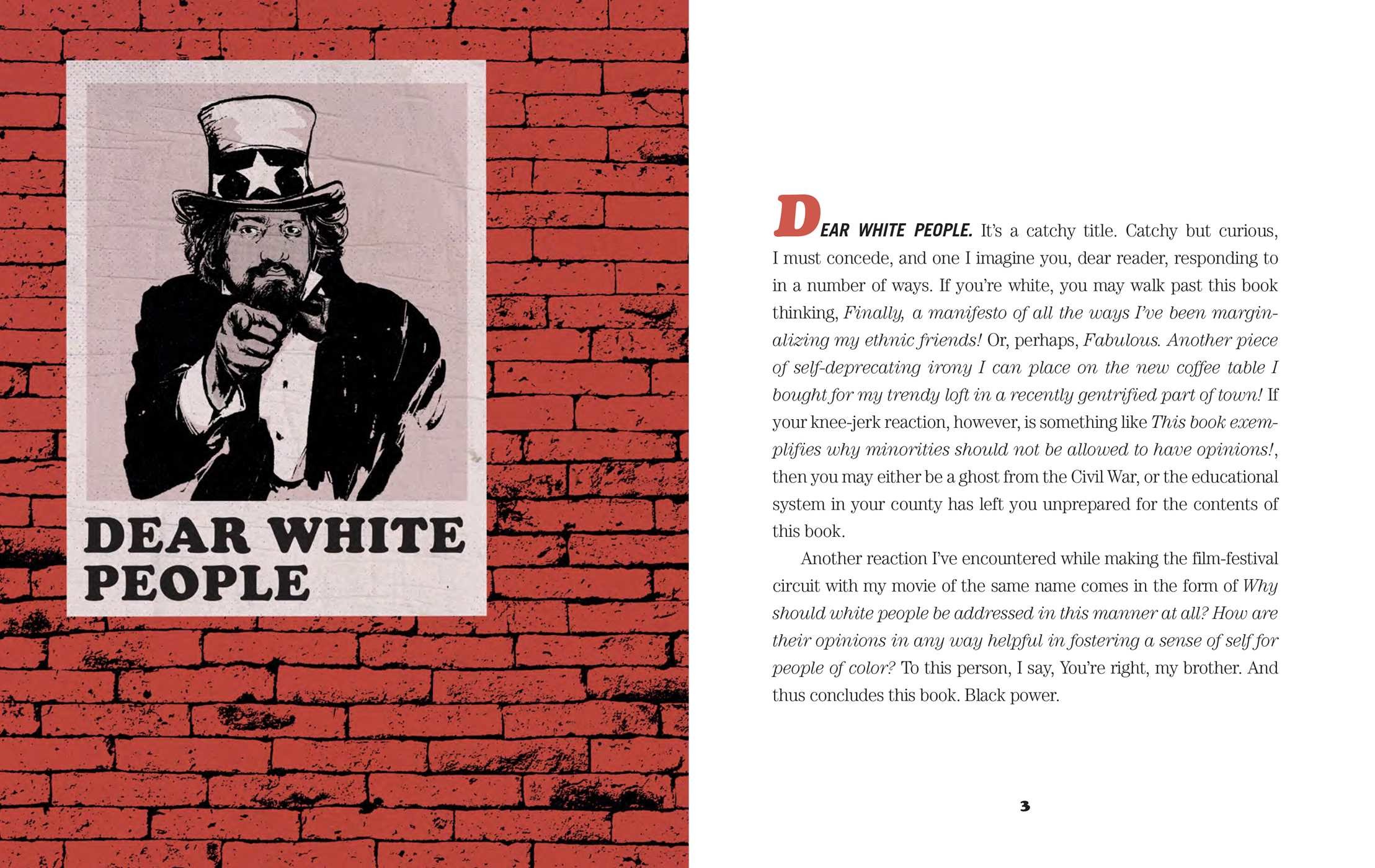 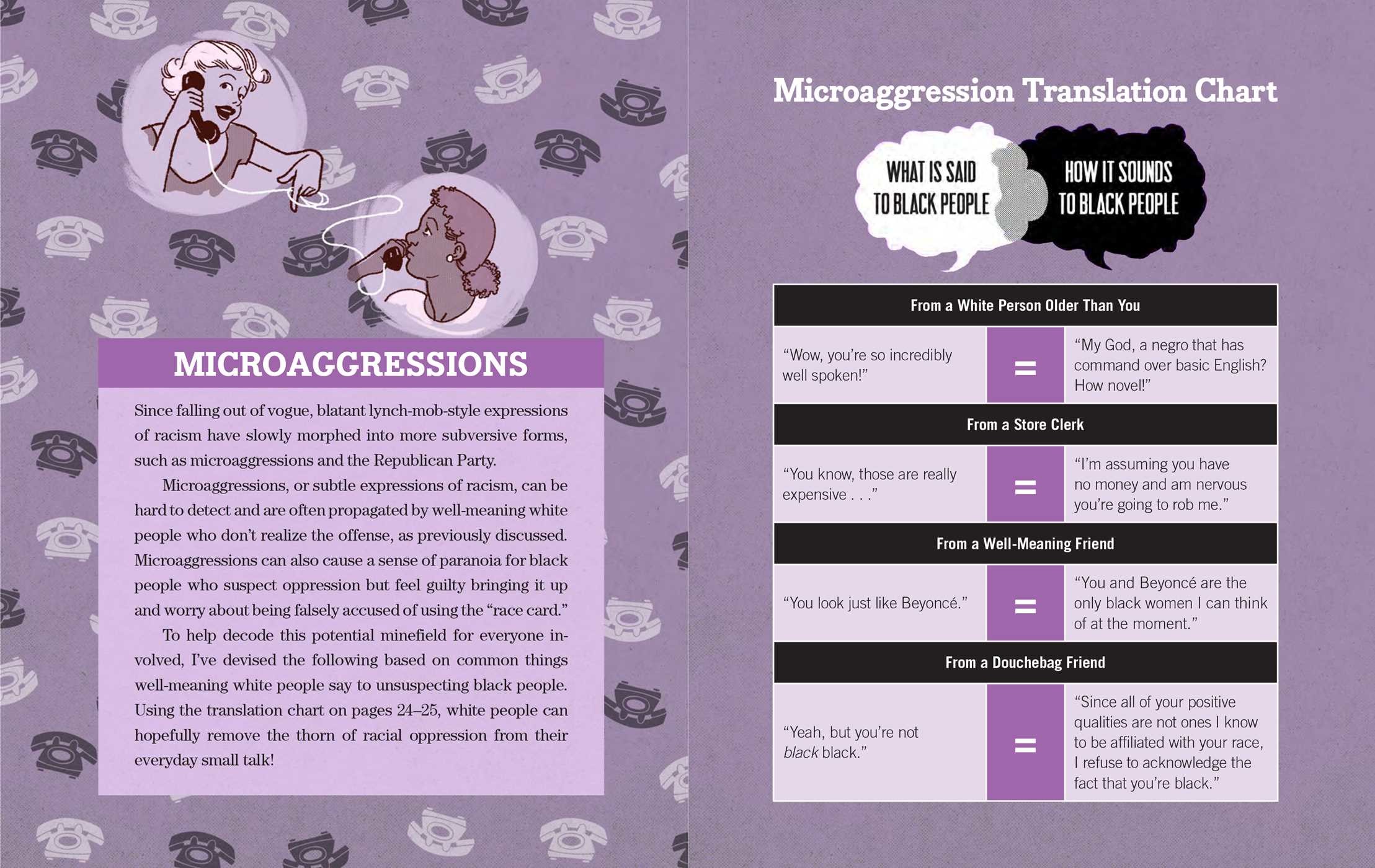 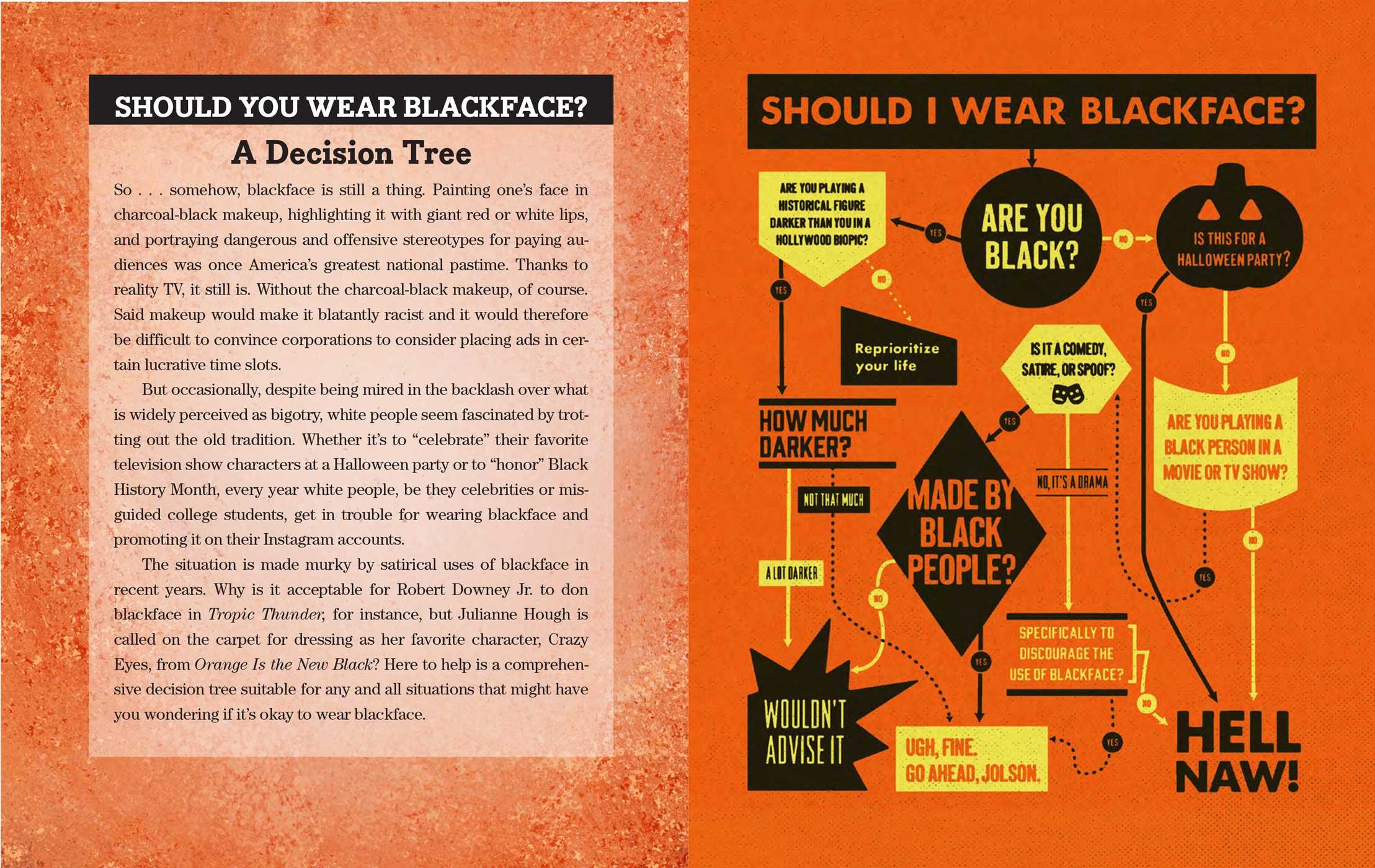 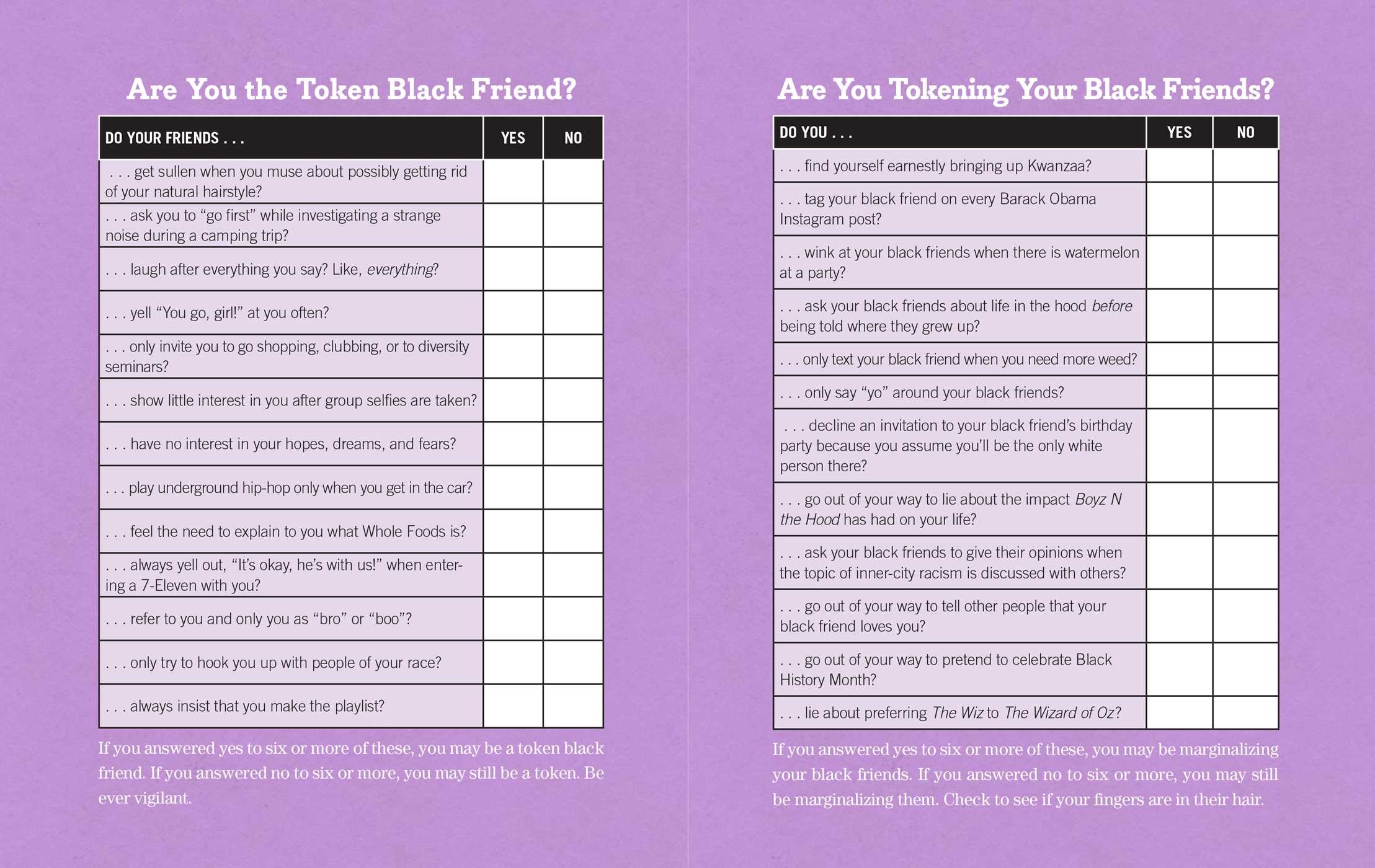 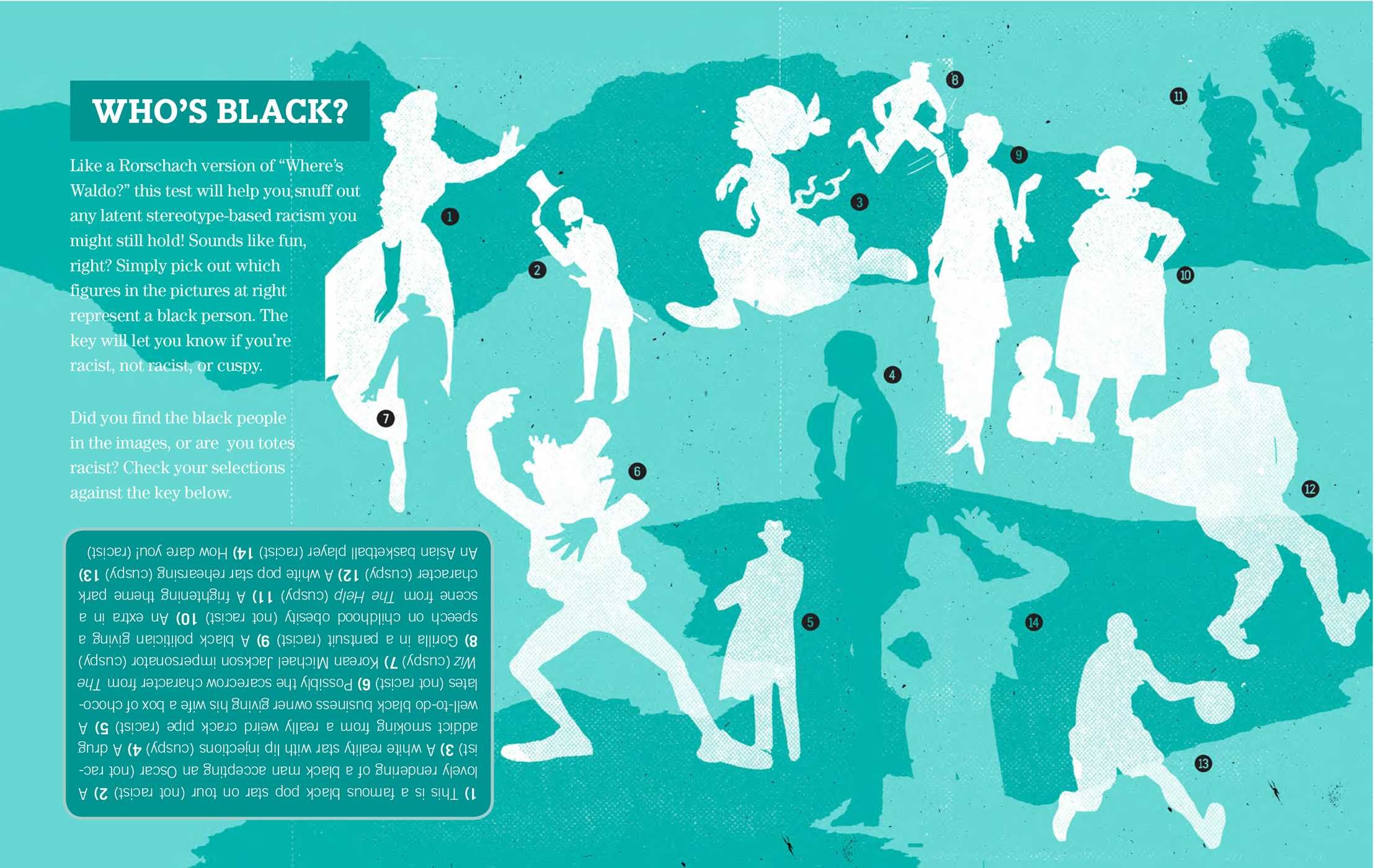 In the satirical tradition of the New York Times bestseller Stuff White People Like comes this witty companion book to the “incredibly entertaining” (Indiewire) film of the same name, which “heralds a fresh and funny new voice” (Variety).

Right out of college, Justin Simien wrote a screenplay about the nuanced experiences of four black students on a predominantly white college campus. The film, Dear White People, garnered a Sundance Award for “Breakthrough Talent” and has been hailed by critics everywhere. Channeling the sensibility of the film into this book, Simien will keep you laughing with his humorous observations, even if you haven’t seen the satiric film.

News Flash—the minimum number of black friends needed to not seem racist has just been raised to two. Rather than panic, readers are advised to purchase a copy of Dear White People. Whether you are a dear white person wondering why your black office mate is avoiding eye contact with you after you ran your fingers through her hair, or you’re a black nerd who has to break it to your white friends that you’ve never seen The Wire, this myth-busting, stereotype-diffusing guide to a post-Obama world has something for you!

With decision-making trees to help you decide when it’s the right time to wear Blackface (hint: probably never) and quizzes to determine whether you’ve become the Token Black Friend™, Dear White People is the ultimate silly-yet-authoritative handbook to help the curious and confused navigate racial microaggressions in their daily lives.

Based on the eponymous, award-winning film, which has been lauded as “a smart, hilarious satire,” this tongue-in-cheek guide is a must-have that anybody who is in semi-regular contact with black people can’t afford to miss!

Please
Stop Touching
My Hair
OR, ON BEING MISTAKEN
FOR A PETTING ZOO

SOMEHOW, despite warnings from most black comedians and that reflexive deer-in-the-headlights look that most black people adopt when asked about it, black hair continues to be a black hole for white people’s fingers.
At a screening of my film Dear White People, a distraught older white woman came up to me with tears in her eyes. She assured me that her desire to touch the hair of her friends came from a place of love. It was only after I gently removed her trembling hands from the back of my scalp, told her it was “just a movie,” and hid behind a display for Transformers: Age of Extinction that I came up with what would have been a far more effective response. I should have told her that her best intentions notwithstanding, if she’d only bothered to ask her black friends if they liked being fondled by anyone other than their lover, she’d understand what an imposition it was.


The Spectacle of Natural Hair


Admittedly, there are few things as beguiling as natural hairstyles in all their diversity. However, thanks to the prevalence of Eurocentric beauty standards and the lasting influence of Lil’ Kim, it’s rare to see even a dreadlock in mainstream media. Unless one has actual black friends it’s unlikely a white person will encounter a frohawk, a lobster roll, and/or a snail bun.3 These concoctions of kinky and curly can be as stunning as any work of art, but I’d urge anyone to refrain from showing their appreciation by probing with their fingers.
For one, there are a number of mysterious hidden energies at play keeping that chunky crown twist together. Whether it’s shea butter, styling spray, or the Holy Spirit, the integrity of many a hairdo relies on being kept safe from white finger resin. Logistics of keeping a hairdo intact aside, science4 tells us that even casual touch can communicate startling degrees of social dominance and intimacy between two people. Outside of accepted codes of casual physical contact such as handshaking and fake hugging between celebrities on red carpets, too much touching can feel threatening to the recipient. Even though one might be filled with awe at the sight of a real-life twisted upknot, simmer. Consider what would happen if you did that at the Museum of Modern Art and the subject of your fascination was a Picasso. Simply by asking to touch the art, you would get confused and irritated looks from the security guards. Appreciation must come hand in hand with restricted use of said hands.


Another source of curiosity when it comes to black hair is its uncanny ability to shape-shift. A white coworker might wonder with admiration, no less, how a black woman can come to work with a Halle Berry–style pixie cut one day and a shoulder-length blow-out the next. “How does she do it?” this hypothetical white coworker might say sotto voce. And while that’s a fair question, using your fingers to find the answer will only ensure that Sheryl5 in accounting will stop inviting you to lunch.
In order to prevent well-meaning white hands from wandering into the headspace of secretly outraged black people, I will outline here exactly how “Sheryl” and every black woman does it.
The truth is, black women are magic. All of them. Not just Angela Bassett in American Horror Story: Coven. The ability to transform curly hair into straight hair and brown into blond begins to manifest around age thirteen for most black girls. The no-lye relaxer product Just for Me! that’s marketed to children is really just a cover. Inside every box is an at-home study kit designed to teach young black girls how to control and manifest their burgeoning hair-shape-shifting abilities as they become women. It’s the black female version of what happens in Harry Potter when one of those sweet white children becomes old enough to learn to be a wizard.
It’s not a great idea to ask a black person any direct questions about the aforementioned magic, as, generally, we are not allowed to speak on its origin. The consequences can be fatal, and I am risking everything I have to give you this information. While it may come at a cost to me and my family, I wanted you to know. The coexistence of the races is that important to me.
I know some of you must be thinking, This is a preposterous and thinly veiled attempt to obscure the use of relaxers, weaves, and lace fronts. Trust me on this one: Unless she tells you otherwise herself, every black woman’s hair, though it may change dramatically from day to day in ways that defy nature, is absolutely her God-given, though possibly magically altered, hair. White people: Do not broach this topic. It doesn’t matter that you’ve seen the Chris Rock documentary Good Hair. Like your favorite movie Frozen suggests, “Let It Go.”


For some black people, being asked for permission to have their hair touched or, worse yet, having it touched by surprise elicits a viscerally negative reaction. We can’t help it. According to the theories of Carl Jung, which I vaguely remember skimming on Wikipedia, all of us have powerful genetic memories going back to our ancestors. Do not be surprised if a black person responds to a request to touch their hair by defiantly yelling out, “I AM KUNTA KINTE!” They are subconsciously recalling that scene in Roots when Geordi from Star Trek is being poked and prodded by a slave trader. Thus is the nature of genetic memory, probably.
Even if images from made-for-TV slavery stories aren’t the first things that come to mind for the person on the receiving end of all of this curiosity, the feeling of being on display at, say, a petting zoo isn’t one anyone would want to feel at work, home, or play. Adding adorable phrases around the request doesn’t help either. Whether you’re saying, “Wow, that’s beautiful; may I?”; “Your little naps are so cute!”; or “Lower yo’ head, boy, so Massa can inspect you,” it all comes across, more or less, in the same way.
There are, of course, some notable exceptions to this rule. In intimate relationships, for instance, it is natural and, in many cases, desirable for a white partner to run his or her fingers through and even pull a lover’s hair, whether it’s natural, short, cropped, or straightened via magic.

The ultimate expression of this is when a black person asks a white partner to grease his or her scalp. If you’re on the receiving end of this request, try to fight the confusion that you will inevitably feel and recognize this request as the sacred honor that it is. You’ve reached the blackest state possible for any white person to reach. Much like enlightenment, it is a rare and oftentimes fleeting state of being. Savor it. And pray you can pull up that Mars Blackmon scene from She’s Gotta Have It on your mobile phone for instructions as you pretend to go to the restroom and look for a comb and some pomade. 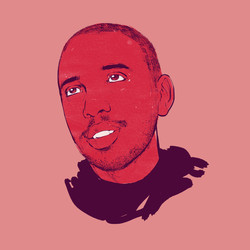 Justin Simien is the creator of the popular Netflix series Dear White People, as well as the writer and director of the critically acclaimed feature film of the same title, which won the Special Jury Award for “Breakthrough Talent” at Sundance 2014. Simien was also featured in Variety as one of “10 Directors to Watch.” In addition to producing and directing online companion pieces for Participant Media’s The Help, The Best Exotic Marigold Hotel, and Middle of Nowhere campaigns, he has also written, produced, and directed for Take Part TV, Participant Media’s funded YouTube channel.

"Seeming to draw equal measures of inspiration from Whit Stillman and Spike Lee, but with his own tart, elegant sensibility very much in control, Mr. Simien evokes familiar campus stereotypes only to smash them and rearrange the pieces."