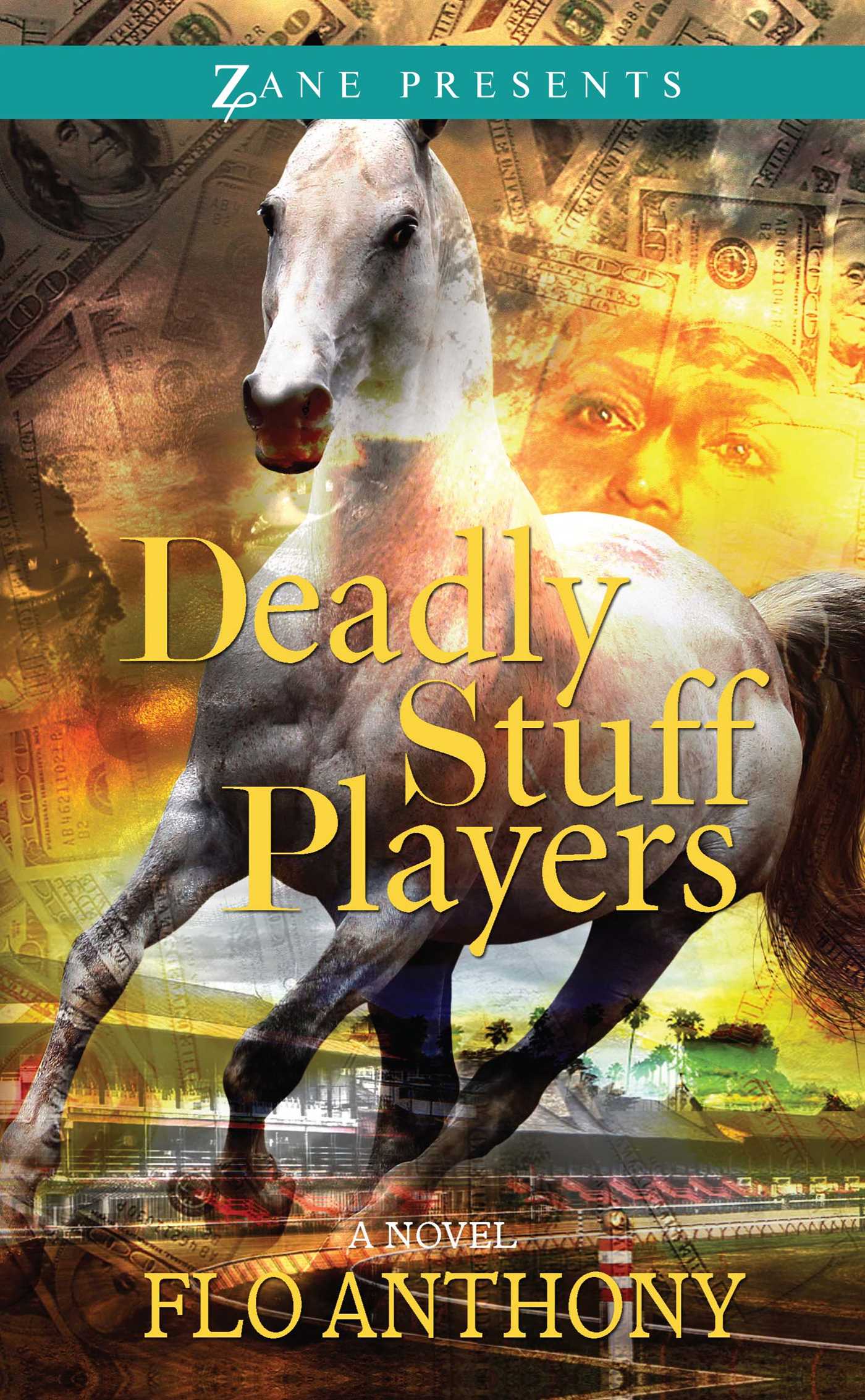 By Flo Anthony
LIST PRICE $15.00
PRICE MAY VARY BY RETAILER

From Hollywood’s hottest nightclubs to the boardrooms behind the scenes, the trendiest restaurants to the bedrooms of the biggest stars—it’s all here in a steamy murder mystery from the celebrity journalist who knows the entertainment world better than anyone.

Valerie, the most popular African American gossip columnist in the United States, and NFL Hall of Famer Rome Nyland are the go-to team for solving Hollywood mysteries. When Andrea Dumas, wife of billionaire Victor Dumas, is found murdered in a sports bar, suspicions arise. Now someone is threating their son, jockey Vance Dumas.

Roshonda Rhodes, a former hooker rumored to have a sex tape with Vance, was allegedly seen fleeing the sports bar the night of the murder. Did she kill Andrea? Or did drug-addicted Jermonna Bradley do it? Valerie and Rome are hard on the case, determined to get to the bottom of it before the killer strikes again.

The woman who knows the entertainment world inside and out, celebrity journalist Flo Anthony has woven this wild tale with so many twists and turns you won’t be able to put it down.

As much as she loved a good party, at the final thrust toward turning into a seasoned citizen of age, Valerie Rollins also loved the comfort of her beautiful wrought-iron bed. A glass of Kendall Jackson chardonnay, a good Zane or Danielle Steel novel, a rerun of Law & Order: Special Victims Unit or a good Lifetime movie, and Val was good to go for the night.

Valerie Rollins was the gossip queen of Black Hollywood. She had a daily syndicated radio show, “Gossip On the Go With Your Gal Valerie Ro,” wrote a weekly syndicated column, and published her own magazine, Black Noir. Val was also a regular talking head on TV One’s Life After, and she still popped up on entertainment news shows here and there.

Her tiny two-bedroom home, or “cottage” as she liked to call it, was nestled on Fountain Avenue beneath the Sunset Strip. After a busy happy hour at Tisha Campbell Martin and Duane Martin’s hot spot in North Hollywood, Xen, Val had fallen fast asleep around nine. So, here she was half asleep/half awake at four a.m. on Saturday morning, catching an old episode of Entourage.

That Adrian Grenier was one gorgeous specimen of a man. However, her DVR was set to it and she couldn’t bring herself to open her eyes. She lay back, enjoying the dull roar of the television. All of a sudden, her beautiful solace was shattered by the ringing of the phone. Val glanced at her cat, Lucky, who had pounced on the phone as if she could answer it.

“Is that the TV?” It kept ringing. No, it was her phone. She managed a groggy, “Hello.”

“Rome, what do you want? Do you realize what time it is? What’s going on?”

“Oh, can it, Val. Anybody who knows you, knows you’re watching Entourage. Listen, I’m on my way to your house. I have to talk to you and I can’t do it on the phone.”

“I’ll be there in less than twenty minutes.”

With that, he hung up. Rome Nyland was one of the finest black men on the face of the Earth. Six-foot-two with a body that looked like a Greek statue, Rome’s skin was as smooth as mahogany velvet. At one time a star wide receiver for the Los Angeles Rams, Rome was now a private detective. Val had met him around five years ago after his cousin, Charmaine Sutton, was murdered. As a journalist, who some people referred to as a “celebrity snitch,” Rome sought Val’s help in uncovering Charmaine’s, who people called “Charlie’s” murderer.

As a result, he and Val had discovered there was a serial killer running around Hollywood. Together, they had solved the huge case, which resulted in them uncovering the death of actress Jennifer Sands. Now they were best friends.

Val first met Jennifer when she was on Broadway, starring in the play Sally Hemings. From the start, the two girls had been BFFs. Although they had been tight, Val was shocked when Jennifer’s will was read and she had inherited $100,000, a Rolex watch, several diamond rings and a Bentley Coupe. Although she still drove her fabulous Cadillac XTS on a daily basis, Val loved to move around Hollywood in the beautiful white Bentley.

An only child, even though she was fifty-one, Valerie considered herself to be an orphan. Valerie’s parents had conceived her later in life, when they were in their late-forties. Her father, Clifton Rollins, died during Val’s senior year of college, when she was nineteen. Her mom, Stella, lived to be ninety. In the latter part of her life, she had relocated from Ann Arbor, Michigan to Los Angeles to live with Val.

Valerie had only been married once, in her early twenties, to a former heavyweight boxing champion. She never had any children. Her only living relatives consisted of a few cousins who resided in Michigan. Despite the lack of a biological family, Val was the opposite of lonely. She had sorors as well as wonderful friends. Her philosophy had always been the family that you selected was often much better than the one that selected you. She believed in living life to the fullest and had made Rome the brother she never had and his son. His son, Romey, made a devoted nephew. It would still be nice to find that special someone to enjoy her sunset years with. She was not ready to give up on that dream yet.

Rome and Val weren’t the only two people in Los Angeles with four a.m. plans on a Saturday morning. Royale Jones was holding court at Peppy’s Playhouse, an exclusive after-hours spot ensconced in the basement beneath a sports bar he owned in Compton.

Royale was in the middle of a hot dice game. He had been rolling sevens and elevens all night and planned to leave Peppy’s with a fist full of money. After that he was going to take care of the unfinished business he had back at the Horizons Hotel….the sexy and nubile reality star Roshonda Rhodes, who was a bronze beauty. She had worked for Royale back in Las Vegas, and he had promised her a clothing line endorsement. He was positive that she’d be waiting when he returned.

Even though his ambitious plans to conquer Hollywood as a film producer had not panned out for Royale in the manner that he had envisioned when he left Florida three years ago, he hadn’t done badly. After making a brief stop in Las Vegas and establishing connections there, he had finally gotten to Hollywood where he had opened a boutique entertainment company that encompassed record deals, party promotions and talent management. He also secretly had a lucrative side hustle that included prostitution and operating an international drug ring. However, Royale was ready to go legit. He was almost financially to the point where he could kiss the street life goodbye. The final deal he was currently working on would definitely bring those plans to fruition. Aside from aiming to represent Roshonda, Royale had recently signed actress Jermonna Bradley to his stable. Her addiction to drugs and fast living enabled him to get her to join the escort business. In fact, she was in Las Vegas right now servicing a client. Little did Royale know that arrangement would never take place.

As Val was heading into the bathroom to jump into a quick bubble bath before Rome arrived, the phone rang again.

She picked it up. “Rome, I know you didn’t get me out of my bed to say you don’t need to talk now.”

Val quickly dialed Jermonna’s cell number, but it went straight to voicemail. Then she tried to *69 the call back, but it was restricted.

What had Jermonna gotten herself into this time? And who is Ro? Did she mean Rome? Maybe that’s why he was rushing over to her house before dawn, to tell her something about Jermonna.

One of the most well-liked characters on television, Jermonna Bradley portrayed Tiffany on the now cancelled Black Hollywood dramatic series, Baldwin Hills. But the girl was living her life as some sort of Hollywood hellion copycat, in and out of drug rehab, constant conflicts in clubs from Hollywood to New York to Miami and Europe. A magnet for lunatics, Jermonna had dated every crazy loser in the entertainment and sports world, not to mention a few street pharmacists, and was now a hot mess. For some reason, Val felt she had to take care of her. Hopefully, Ro was Rome, and, maybe he could tell her the latest calamity in Jermonna’s life.

Just maybe he might know where Val could find her little friend. It was the first Saturday in December. Val had planned to get started with Christmas preparations today. It looked like those plans were a thing of the past.

The weekend was off to a banging start! Unfortunately for Val, she had no idea how literally “banging” the next few days were about to become!
Flo Anthony

Flo Anthony is a gossip columnist for the Philadelphia Sun. She is a radio show host, reporter for the New York Daily News, publisher and editor-in-chief of Black Noir Magazine, and blogger. She has appeared on many TV shows, including The Insider, Entertainment Tonight, Inside Edition, the Fox News Channel, and MSNBC. She is the author of Deadly Stuff Players and its sequel, One Last Deadly Play. A graduate of Howard University, Flo resides in the East Harlem section of New York City.

By Flo Anthony
LIST PRICE $15.00
PRICE MAY VARY BY RETAILER