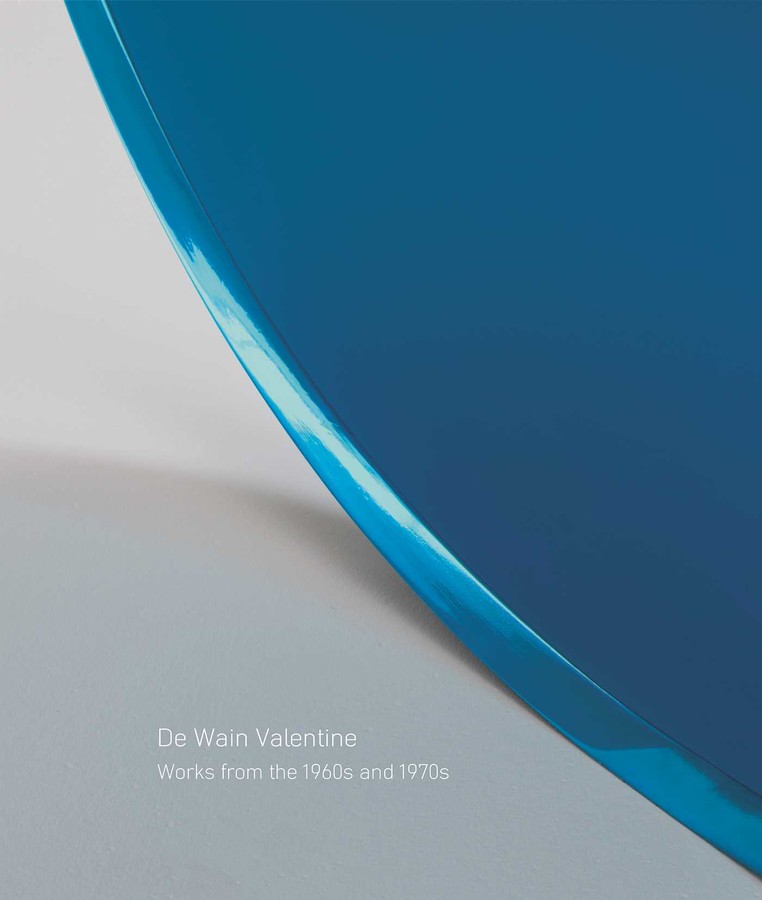 De Wain Valentine: Works from the 1960s and 1970s includes rich color plates of Valentine’s “Columns,” corporeally scaled sculptures cast in colored polyester resins that recede from a wider base up to a narrow tip; his “Circles,” 6-foot discs that display not only the artist’s mastery of geometrical form, but also highlight his command of color in sculpture; and a selection of the artist’s smaller forms—rings, discs, and double pyramids.

A key member of the Light and Space movement in Los Angeles during the 1960s and 1970s, De Wain Valentine is distinguished in particular by his in-depth understanding of synthetic materials and his ability to transform industrial products into artworks that investigate the seductive power of light, transparency, reflection, and surface. Published in conjunction with his critically lauded 2015 exhibition at David Zwirner, New York, De Wain Valentine: Works from the 1960s and 1970s focuses on the artist’s pioneering achievements in polyester resin. A new scholarly text by Robin Clark on Valentine’s production from this period details his personal history and his innovations with this material. Influenced by the vast California landscape, he was initially confronted with material limitations: at the time, polyester resins could not be poured in volumes exceeding fifty pounds. Not willing to accept this restriction, Valentine partnered with Hastings Plastics in 1966 to create an entirely new resin that could be cast in larger quantities. The resulting material, known as Valentine MasKast Resin, allowed the artist to dramatically increase the scale of his work. With its inherent ability to contain and reflect light, while maintaining a powerful luminous dimension, polyester resin would form the foundation of Valentine’s practice.

The catalogue also features extensive documentation of Double Column Gray (1975–1976), two massive, identical columns that each stand twelve feet tall. Originally executed for Baxter Travenol Laboratories’ newly built corporate headquarters in Deerfield, Illinois, Valentine had conceived of two immense vertical columns standing side by side, but because of architectural modifications (the ceiling in the company’s reception area was lowered at a late stage of construction), Valentine was forced to install the two slabs on their sides. Forty years after its initial conception, the exhibition at David Zwirner represented the first time this work was presented in its intended configuration.

“These crystalline objects are fascinating to behold for their prismatic effects and for the tantalizing sense of cosmic import they so sumptuously embody.”

“[Valentine’s] work seems to herald the current flirtation between art and technology. And indeed, Valentine’s almost glowing forms—likened to mandalas in a 1979 feature in this magazine—seem to have anticipated the Apple aesthetic of Zen acolyte Steve Jobs.”

“Several impressive, perfectly disc-shaped sculptures in blue, red, and gold mysteriously stand on their own, without any support.”

“The mystery of the installation of the ‘Circles’ is part of their impact—they are beautiful because they are sometimes tough to suss out mentally.”

“Highly reflective yet transparent, fragile yet satisfyingly dense, industrial yet evocative of nature, Valentine’s resin is far more complex than the simplicity of his geometric forms might suggest.”