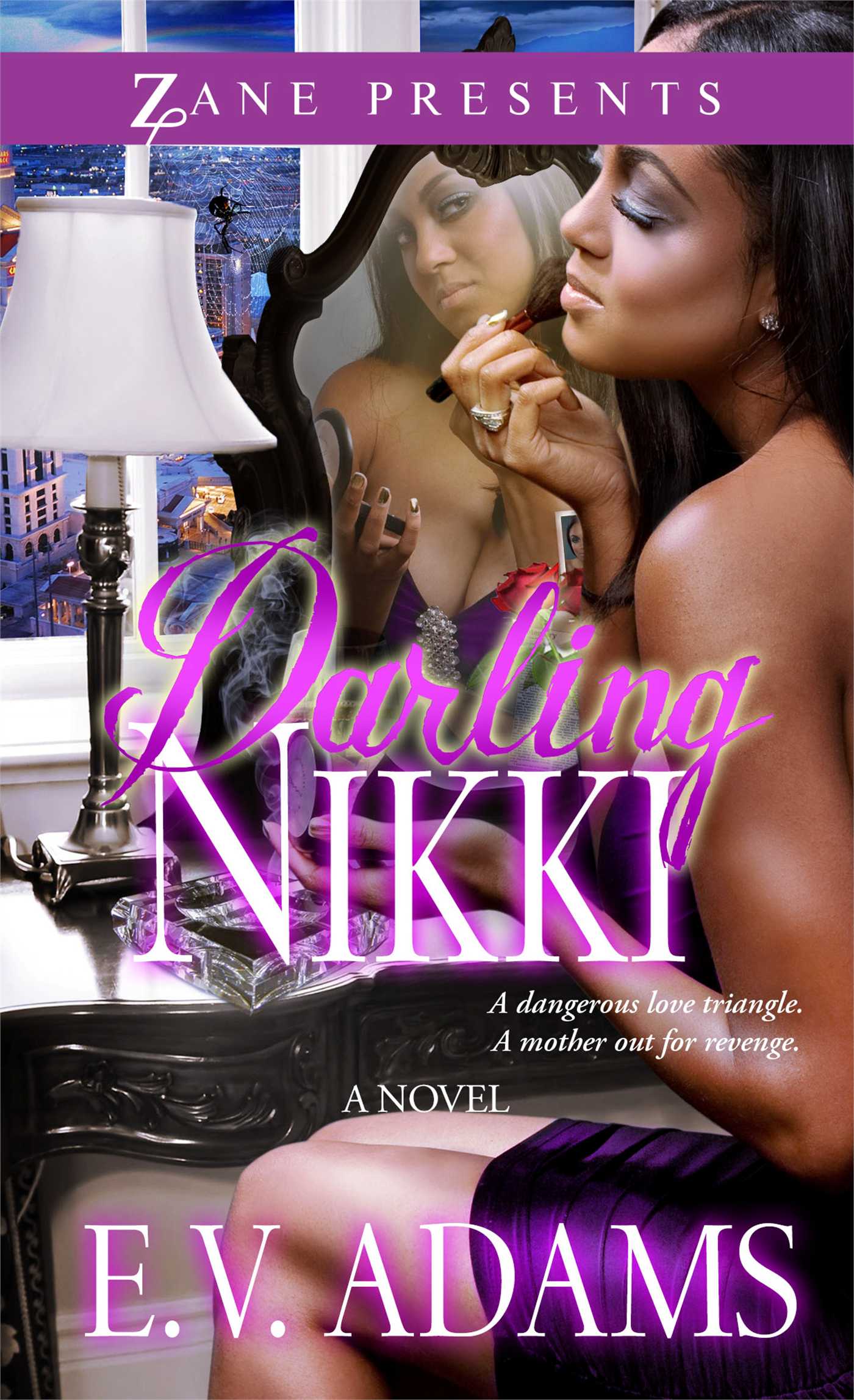 A cunningly crafted thriller, Darling Nikki is sure to keep readers guessing until the very end as a vengeful seductress lures her ex to his murder during a staged romantic encounter, but does not realize that her jealous husband is on their trail.

Nikki Johnson has had enough of family secrets. She was the perfect wife to millionaire real estate tycoon Duncan Johnson until she discovered his mistress and child. And now her careless teenage son’s pregnant girlfriend is moving in. She turns to her ex-husband, Chance Brown, for solace.

Chance is skeptical when his once-spiteful ex-wife, Nikki, comes back into the picture, remarried and claiming still to be in love with him. During a Las Vegas getaway, Nikki grows bitter with Chance about his neglect of their son and his infidelity with a close family friend. But it’s a darker secret altogether that has forced her over the edge—and she’s determined to take Chance with her.

Darling Nikki Chapter One
A Few Days Prior
November 9, 2007

Duncan Johnson unlatched the kitchen window and shoved it open. The cool breeze brought physical comfort, but did nothing to ease his mind. Seconds earlier, he had opened a small white envelope and discovered his fate.

YOU WILL DIE AND YOU KNOW WHY.

The message appeared to have been assembled with clippings from magazines and newspapers. Each letter had a different font, color, style, and background, neatly glued to the page.

His nose twitched at the spicy scent that radiated from the note. It was a perfume that was familiar, but hard to recollect. The page slipped from his sweaty fingers and fell onto the pile of mail beneath him on the marble counter.

Who was this mystery lady and why would she want him dead?

Closing his eyes, he recalled a collection of perfume on his wife’s vanity. Nikki changed scents as often as she changed attire, which was several times a day.

She was no killer, though, and his wife was the last person he wanted to suspect. But after what had happened during the previous month, he began to wonder if this could be her way of paying him back for the pain he had caused.

Duncan heard the woman’s voice echoing from the living room in his office two rooms over. He stood up from the desk, abandoning his computer to see who was at the front door.

“And who are you?” Nikki asked the lady.

Marie! How did she find out where he lived?

Duncan rushed down the hallway with hopes that he would be able to explain everything to Nikki, but it was too late. Marie was already filling Nikki’s ears with what he should have told her about three years earlier.

His seventeen-year-old stepson, Rayshad, lay across the couch with his legs crossed, ignoring the magazine in his lap, listening to their conversation.

“I know Duncan probably didn’t tell you about me,” she went on, “but my name is Marie, his baby’s mother.”

Nikki looked back and forth between the lady and small child. “Excuse me?”

Duncan stood quietly behind Nikki in the doorway frame of the hallway.

“That can’t be possible,” Nikki said. “Duncan doesn’t have any children.”

“Maybe not to your knowledge.”

Marie adjusted the toddler on her hip and smiled down into the baby’s face. “Demetria just turned three.”

“What are you doing here?” Duncan slowly stepped out of the shadows.

Marie looked at Duncan with a twisted lip. “What am I doing here? I shouldn’t have to play detective to get you to see your daughter.” She stepped forward and shoved the little girl into Duncan’s arms. “Her name is Demetria, in case you forgot.”

Duncan looked at Nikki and tried to push the child back at Marie. “I—”

Nikki avoided eye contact with him. As the pain in her eyes grew, he felt compelled to make up some kind of excuse for the situation. Something that made sense.

Marie turned her back to them with a set of car keys jingling in her hand. “I expect that you’ll be taking her shopping, since you haven’t tried to do anything for her before.”

Duncan bit his lip to keep from saying something he would regret. He wanted to follow Marie outside, yank her shoulders, and tell her to stay away from his home and his family, but it was his wife he needed to console.

Nikki grabbed the golden door handle. “Nice meeting you, Marie. Duncan will be calling you later on.”

Marie parted her thin lips, but Nikki slammed the door in her face.

Nikki stormed away as the baby wailed in his ear.

Duncan looked at his stepson helplessly. “Take her for me,” he begged.

Rayshad rose from the couch and took the crying child from Duncan’s grasp.

“Nikki...” He sprinted upstairs to catch up with her, but she pressed forward toward their bedroom.

Duncan tripped over a step and fell; pain shot through his knee. “Let me explain.” He stood back up and heard the bedroom door slam shut. By the time he made it to the room, Nikki had already locked the door. He knocked. “Please let me in and at least hear me out.”

“That baby is only three years old, Duncan,” she cried from the other side of the door.

“Baby. Come on. I’ll do anything to make this up to you.”

When Nikki didn’t say anything else, he threw his head back. He dreaded this day and cursed himself for being so careless. How did Marie find out where he stayed in the first place? Their community was gated. Who let her in and why?

“And you will be sleeping somewhere else, tonight!” Nikki added. “One of the guest rooms, on the couch—go sleep with Marie! But you won’t be sleeping in bed with me.”

The more Duncan thought about the death threat, the more he realized that Marie had to be the one behind this nonsense. But was it something he really needed to be concerned about?

Duncan tucked the strange note in his back pocket, trashed what mail he didn’t care for, and paced out of the chef’s kitchen. Usually this time of day, when he arrived home from work, the aroma of another delicious meal greeted him followed by a kiss from Nikki. She usually took pride in being a housewife, but Marie’s appearance had sent her into early retirement.

Walking slowly through the living room, he looked up at the high ceilings, plastered walls, and ornate carvings—all inspired by eighteenth-century France. A wonderful wife he had in Nikki as a gourmet chef, interior decorator, housekeeper, mother, and lover, but with each day that passed, he was losing the love of his life more and more.

Mixed emotions swirled through the pit of his stomach as he plopped down on a golden seat. Could Nikki be scorned enough to plot murder? She was neglecting her duties around the house, disappearing at odd times, and not returning his phone calls—all of which he accepted, taking into consideration how hurt she was. He was willing to stay in the doghouse as long as she didn’t take things too far. But after what he’d discovered while analyzing the phone bill last night, her recent change in behavior all made sense. Nikki was fooling around with her ex-husband, Chance Brown.

Had to be. She hadn’t spoken to him since the divorce seven years ago—not that Duncan knew of—but on October 8, 2007, shortly after the Marie situation, she started calling him, again.

Duncan dialed Nikki for the fourth time, rapidly tapping his foot on the plush rug as the cell phone rang. He had a feeling she was purposefully ignoring his calls. Was she with Chance? She definitely wasn’t at her mother’s house, because he’d already checked. That had been her excuse lately since they’d found out Gina had cancer.

The purr of an engine approaching from a distance snapped Duncan out of his thought pattern and he hung up the phone before leaving a voice message. Staring at the headlights coming closer through the fog, he swallowed with anticipation. But when the neighbor’s black Bentley came into clear view, he slumped back on the couch.

He gazed into the cloudy sky, coming up with his own scenarios about where his wife could be at that moment. In Chance’s arms. In his bed. He quickly shook away his thoughts and climbed to his feet. He refused to think Nikki was behind the death threat and didn’t want to believe she was cheating on him with her ex-husband, either. After all, Chance was the father of her only son, so maybe their discussions were about Rayshad. Especially since the young man had been stressing Nikki over the past year. But why hadn’t she told Duncan anything about their reunion?

A flash of lightning spread across the darkening sky and thunder erupted, echoing throughout the house. The news predicted bad weather, so he hoped Nikki was on her way home soon. But since he couldn’t get in touch with her for the answers he wanted now, Duncan planned to ask Rayshad as soon as he got home from school.
E. V. Adams

E.V. Adams is a writer by passion and trade. From journalism major to freelance magazine article writer, she has been published in small magazines such as The Shoot and Jackson Christian Family. She currently runs a career marketing and editorial service specializing in executive résumé writing.