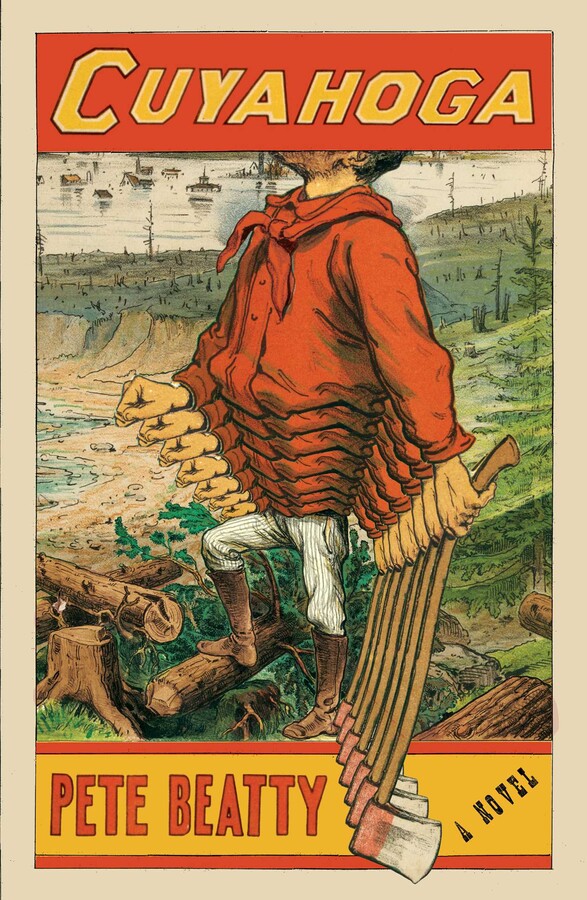 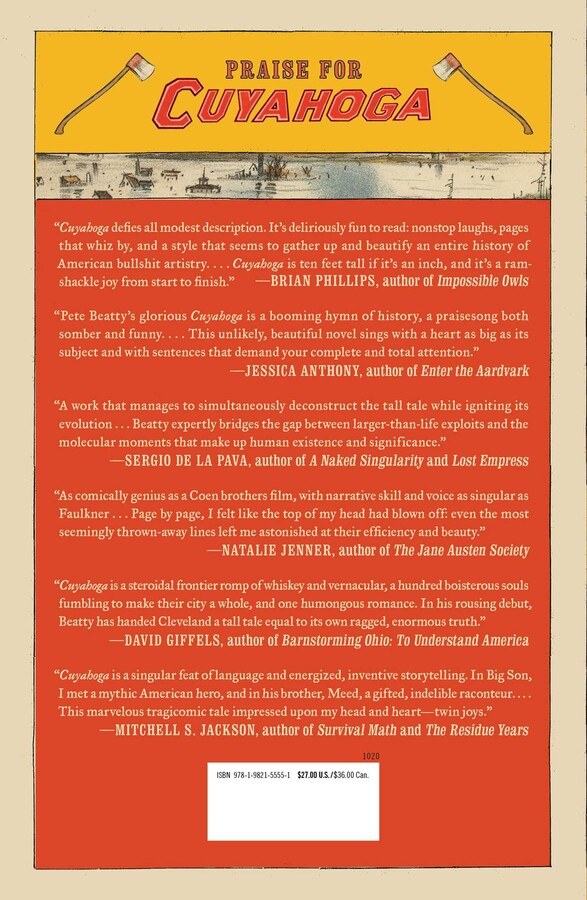 By Pete Beatty
LIST PRICE $27.00
PRICE MAY VARY BY RETAILER

One of The Millions and BuzzFeed’s Most Anticipated Books

A spectacularly inventive debut novel that reinvents the tall tale for our times—“Cuyahoga defies all modest description…[it] is ten feet tall if it’s an inch, and it’s a ramshackle joy from start to finish” (Brian Phillips, author of Impossible Owls).

Big Son is a spirit of the times—the times being 1837. Behind his broad shoulders, shiny hair, and church-organ laugh, Big Son practically made Ohio City all by himself. The feats of this proto-superhero have earned him wonder and whiskey toasts but very little in the way of fortune. And without money, Big cannot become an honest husband to his beloved Cloe (who may or may not want to be his wife, honestly).

In pursuit of a steady wage, our hero hits the (dirt) streets of Ohio City and Cleveland, the twin towns racing to become the first great metropolis of the West. Their rivalry reaches a boil over the building of a bridge across the Cuyahoga River—and Big stumbles right into the kettle. The resulting misadventures involve elderly terrorists, infrastructure collapse, steamboat races, wild pigs, and multiple ruined weddings.

Narrating this “deliriously fun” (Brian Phillips) tale is Medium Son—known as Meed—apprentice coffin maker, almanac author, orphan, and the younger brother of Big. Meed finds himself swept up in the action, and he is forced to choose between brotherly love and his own ambitions. His uncanny voice—plain but profound, colloquial but surprisingly poetic—elevates a slapstick frontier tale into a screwball origin myth for the Rust Belt.

In Cuyahoga, tragedy and farce jumble together in a riotously original voice. Evoking the Greek classics and the Bible alongside nods to Looney Tunes, Charles Portis, and Flannery O’Connor, Pete Beatty has written a rollicking revisionist (mid)Western with universal themes of family and fate—an old, weird America that feels brand new.

Winter.
In the stories you are used to, a stranger arrives at the castle, or the king is gnawed by crisis. Swords bang together. Ghosts trouble a pale hero. Lovers’ hearts boiling. We drink down such wild stories to drown our worries. They are whiskey to wash out our brains.

My brother’s stories are more apple cider. They are good to drink but you will not forget yourself entirely. Wholesome tales, without too many fricasseed widows. True mostly – I will not lie any more than is wanted for decency. Simple and moral, easy to grab, the better to encourage someone over the head with. Not too quiet – you must not fall asleep. Let us have commerce and racing horses. Progress and the mastery of nature. Swap swords for axes and plows. Let us have tenderness but also a dash of cussedness and tragedy. All in the manner native to Ohio.

In this story lovers’ hearts do not boil but go slowly like stew. The crisis has got square cow’s teeth instead of fangs. There is not a king to be seen. Only my brother as hero.

And we will have a stranger at the castle.

I will take that good part.

My name is Medium Son.

We are no longer strangers any – folks call me Meed. 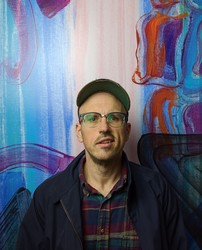 “Beatty evokes the familiarities of genre, history and place while drafting them for a wild new context. In this regard, Cuyahoga is a breezy fable of empire, class, conquest and ecocide… Beatty revels in fabulizing a region he clearly knows and loves.”
—New York Times Book Review

“Pete Beatty’s very funny, rambunctious debut novel, Cuyahoga…could be read with pleasure in 2002, or 1950. Or 1837, when most of it is set. It’s a satire of tall tales, but not a distant, too-cool treatment. Beatty, a Cleveland-area native, deeply inhabits the tone and style of the form, paying sidelong homage to an essential American genre… A healthy society might stand to be more skeptical of the myth-making that creates such figures. But in the society we have, they endure, and Beatty wrings absurd and serious pleasure from them.”
—Los Angeles Times

“Entertaining, rambunctious, and touching… [Big Son is] the most extraordinary hero in Ohio’s history, a hero hitherto unknown and unsung (and, admittedly, fictional)… Cuyahoga is filled with memorable characters…Rough-hewn and ribald, uproarious and affecting, Beatty’s novel is a singular piece of work. Big Son is a frontier demigod in the mold of Paul Bunyan, Pecos Bill, and Davy Crockett, but far more poignantly drawn than any of them…The book’s dialogue is wonderfully idiosyncratic, its asides surprisingly insightful…A great read set in a great city, Cuyahoga is tragic and comic, hilarious and inventive — a 19th-century legend for 21st-century America,”
—Boston Globe

"A hilarious and moving exploration of family, home, and fate ... you won't read anything else like it this year.”
—Buzzfeed, most anticipated

“It’s worth mentioning how much fun there is to be had with Cuyahoga, a lot of which will provoke out-loud laughter. The robust yarn’s patron spirits would include Twain and Charles (True Grit) Portis. Beatty has fashioned a true picaresque accomplishment,”
—Artsfuse

"A boisterous adventure."
—The Millions, most anticipated

“Cuyahoga brings long ago midwest back to life,”
—Chicago Reader

“A rollicking, inventive, satirical twist on fables and tall tales…with an engrossing style of prose and humor that critics have compared to John Barth, Thomas Pynchon and Charles Portis.”
—Cleveland Scene

"Really good: boldly conceived, imaginatively written and wholly original… Following in the fantastical footsteps of novelists such as John Barth and Thomas Pynchon, Beatty uses his home state as a jumping-off point for a wild, far-fetched tale… Most satisfying is Beatty’s redolent prose.”
—Columbus Dispatch

"An improbable, downright preposterous yarn ably spun and a great entertainment for a time in need of laughter.”
—Kirkus, starred review

A ribald, shaggy delight…Told in lively, poetic language, Cuyahoga feels at once brand new and as old as its namesake river,”
—Shelf Awareness

“Cuyahoga defies all modest description: It’s deliriously fun to read: nonstop laughs, pages that whiz by, and a style that seems to gather up and beautify an entire history of American bullshit artistry... Cuyahoga is ten feet tall if it's an inch, and it's a ramshackle joy from start to finish.”
—Brian Phillips, author of Impossible Owls

“Pete Beatty’s glorious Cuyahoga is a booming hymn of history, a praisesong both somber and funny…This unlikely, beautiful novel sings with a heart as big as its subject, and with sentences that demand your complete and total attention.” –Jessica Anthony, author of Enter the Aardvark

“A work that manages to simultaneously deconstruct the tall tale while igniting its evolution…Beatty expertly bridges the gap between larger than life exploits and the molecular moments that make up human existence and significance."
—Sergio de la Pava, author of A Naked Singularity and Lost Empress

“As comically genius as a Coen Brothers film; with narrative skill and voice as singular as Faulkner... Page by page, I felt like the top of my head had blown off: even the most seemingly thrown-away lines left me astonished at their efficiency and beauty.”
—Natalie Jenner, author of The Jane Austen Society

“…Cuyahoga is a steroidal frontier romp of whiskey and vernacular, a hundred boisterous souls fumbling to make their city a whole, and one humongous romance. In his rousing debut, Beatty has handed Cleveland a tall tale equal to its own ragged, enormous truth.”
—David Giffels, author of Barnstorming Ohio: To Understand America

“A great big American bouncy castle of a book—strange, exhilarating, hilarious and alive—and every sentence so perfect! An absolute delight.”
—Ben Loory, author of Tales of Falling and Flying

“…Cuyahoga is a singular feat of language and energized inventive storytelling. In Big Son, I met a mythic American hero, and in his brother Meed, a gifted, indelible raconteur… This marvelous tragicomic tale impressed upon my head and heart—twin joys.”
—Mitchell S. Jackson, author of Survival Math and The Residue Years

By Pete Beatty
LIST PRICE $27.00
PRICE MAY VARY BY RETAILER