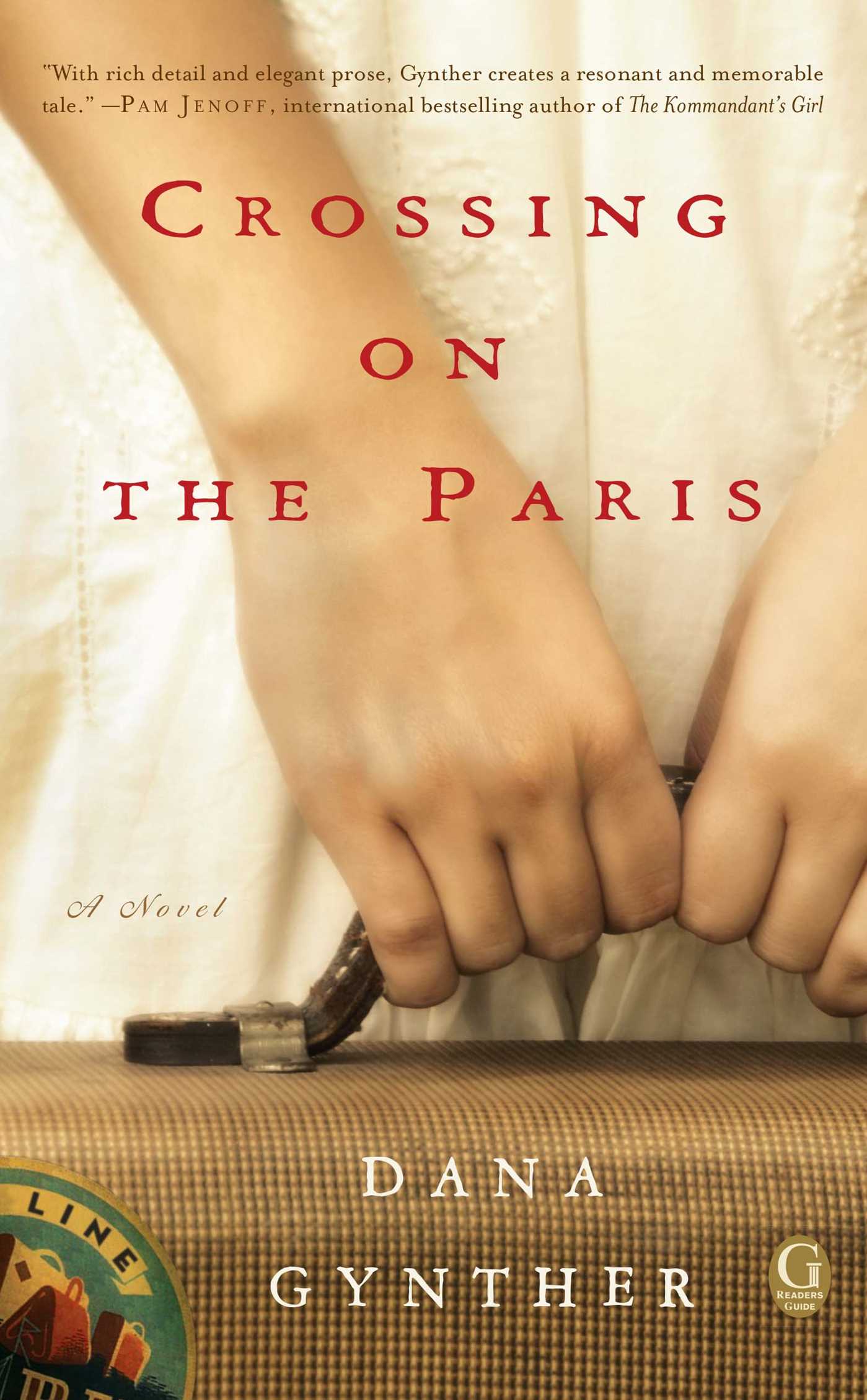 Crossing on the Paris

By Dana Gynther
LIST PRICE $20.99
PRICE MAY VARY BY RETAILER

Downton Abbey meets Titanic in this sweeping historical novel about three women of different generations and classes, whose lives intersect on a majestic ocean liner traveling from Paris to New York in the wake of World War I.

The opulent age of empires is ending, but the great queens of the sea— the magnificent ocean liners—continue to reign supreme. Despite the tragedy of the Titanic, the race to build ever larger and more luxurious floating palaces continues, and passengers still flock to make the Atlantic crossing in style.

In 1921,the SS Paris leaves Le Havre on her maiden voyage. Aboard, passengers dine in glittering grandeur on French cuisine, served by hundreds of unnoticed servants and chefs. Below the waterline, the modern oil-fired engines throb day and night. And for three women, this voyage will profoundly change their lives.

Traveling first class, elderly Vera Sinclair is reluctantly moving back to Manhattan after thirty wonderful years abroad. In cozy second class, reveling in her brief freedom from family life, Constance Stone is returning after a failed mission to bring her errant sister home from France. And in the stifling servants’ quarters, young Le Havre native Julie Vernet is testing her wings in her first job as she sets out to forge her own future. For all three, in different ways, this transatlantic voyage will be a life-changing journey of the heart.

This reading group guide for The Woman in the Photograph includes an introduction, discussion questions, and ideas for enhancing your book club. The suggested questions are intended to help your reading group find new and interesting angles and topics for your discussion. We hope that these ideas will enrich your conversation and increase your enjoyment of the book.

Model and woman-about-town Lee Miller moves to Paris determined to make herself known amidst the giddy circle of celebrated artists, authors, and photographers currently holding court in the city. She seeks out the charming, charismatic artist Man Ray to become his assistant but soon becomes much more than that: his model, his lover, his muse.

Coming into her own more fully every day, Lee models, begins working on her own projects, and even stars in a film, provoking the jealousy of the older and possessive Man Ray. Drinking and carousing is the order of the day, but while hobnobbing with the likes of Picasso and Charlie Chaplin, she also falls in love with the art of photography and finds that her own vision can no longer come second to her mentor’s. The Woman in the Photograph is a richly drawn, tempestuous novel about a talented and fearless young woman caught up in one of the most fascinating times of the twentieth century.

1. Early in their affair, Lee notes that “from the outside” she and Man “looked like opposites: old and young, short and tall, dark and light, serious and gay” (p. 33). While these are superficial differences based on Lee’s first impressions of the other artist, discuss the deeper chasms that separate Man and Lee. Do you think that they were a mismatch from the beginning, or is there truth in the saying that opposites attract?

2. Man and Lee’s love for each other and their love for art are entwined from the beginning, while modern workplace romances are often frowned upon. Do you think they would have been smarter to disconnect their work from their affair after their initial meeting?

3. Though she leaves New York in search of a less conventional life, one of the things Lee says that she loves about French Vogue, or Frogue, is that “relationships there were simple” (p. 86), while her time in the studio with Man is anything but. What keeps Lee tied to her complicated life with Man? Can you relate to her reasons?

5. Gynther notes that Lee had “few close female friends” (p. 116), but a few key female figures feature prominently in Lee’s life. Discuss her relationships with Tanja, Kiki, and her mother. How do these women shape her story and sense of self?

6. “It was actually the art history class that made me want to quit painting. . . . I thought, what could I possibly do that was new? Then I came here and saw what Man and his friends were doing. Turning art upside down and on its head. . . . And I think it’s more than just interesting, funny, or what have you. It’s necessary” (p. 125). What do you think Lee means when she talks about “necessary art”? Do you think art is necessary?

7. Would you describe Man as Lee’s muse? Why or why not? What inspires her most?

8. Compare the ways that men “use” Lee to the ways Lee “uses” men—whether sexually, socially, or professionally. You might examine her relationships to Man, her father Theodore, de Brunhoff, Jean Cocteau, Zizi, and Aziz Eloui Bey.

10. How do you think Lee’s early sexual trauma relates to her views on sex and relationships? Did her constant fear of being “tied down” to a man strike a chord with you?

11. Lee compares herself to the Seabrooks’s slave girl, remarking at how different she is from the muse she plays in Cocteau’s film. What do the women have in common? What separates them, other than their appearances?

12. While sex is an important part of Man and Lee’s relationship, in what ways does it keep them from seeing eye to eye?

13. In the end, Lee wonders whether all artists need either extreme pleasure (sex, love, beauty) or extreme pain (madness, war, death) to create their most meaningful works. Which do you relate to more?

1. Man mentions the music of “Django Reinhardt, tango, and Strauss” that he used in his films, and Lee connects to the showtune “Love for Sale” by Cole Porter. Use these mentions as inspiration and create an avant-garde playlist inspired by the novel to provide a soundtrack for your book club.

2. Display photos of Lee by the artists mentioned in the book like Arnold Genthe, Edward Steichen, and Man Ray, as well as photos taken by Lee, both in her surrealist days and as a groundbreaking war photographer in Europe.

3. Learn more about the author and her other works of historical fiction at her personal website, http://danagynther.com 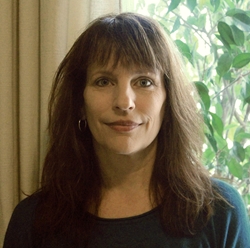 Dana Gynther was raised in St. Louis, Missouri, and Auburn, Alabama. She has an MA in French Literature from the University of Alabama. She has lived in France and currently lives in Valencia, Spain, where she and her husband work as teachers and translators. They have two daughters and an extremely vocal cat.

Gynther scores with this first-rate story centering on three women whose lives intersect aboard an ocean liner...The ship’s details, the different levels of service and luxury experienced by the passengers and crew, as well as the twists and turns of the passage, prove engrossing...Gynther proves herself a fine storyteller with this artful tale.

“Gynther skillfully interweaves the tales of three women sailing from France to America in 1921 on the grand ocean liner that gives this solid debut novel its name…Each of these women has a distinct and interesting voice, and the bonds they form with one another feel strong and meaningful. Gynther switches smoothly between their points of view, weaving a wholly satisfying, nostalgic journey from beginning to end. Bon voyage.”

"Gynther's debut is a lovely story...the leisurely place allows the friendship between these women of disparate classes to shine in this pleasant tale."

A November 2012 Indie Next Pick, Crossing on the Paris, about three women returning to America on a voyage that will change their lives, has the feel of a riveting miniseries as you turn the pages expectantly wanting to find out how this voyage ends.

“With rich detail and elegant prose, Gynther creates a resonant and memorable tale.”

– Roberta Rich, author of The Midwife of Venice

Crossing on the Paris

By Dana Gynther
LIST PRICE $20.99
PRICE MAY VARY BY RETAILER