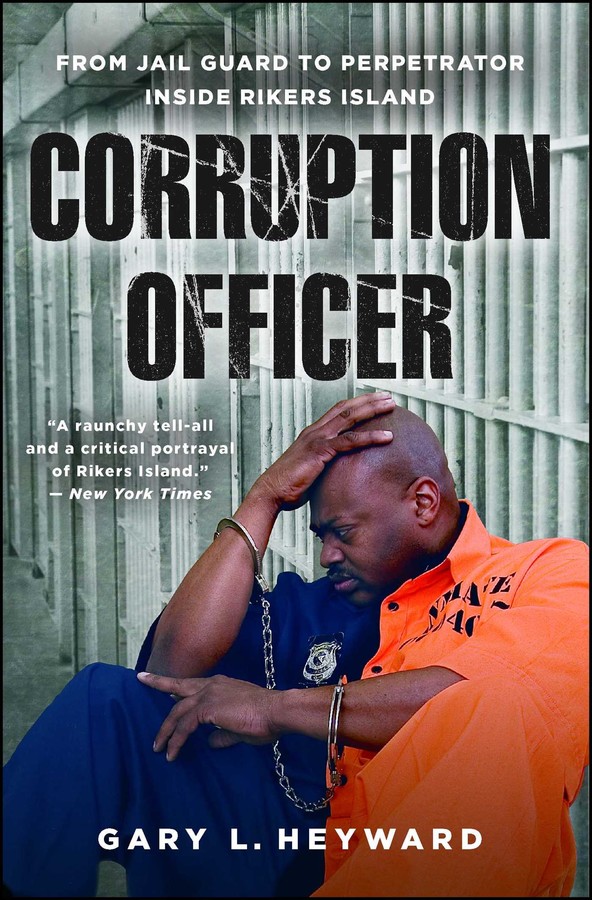 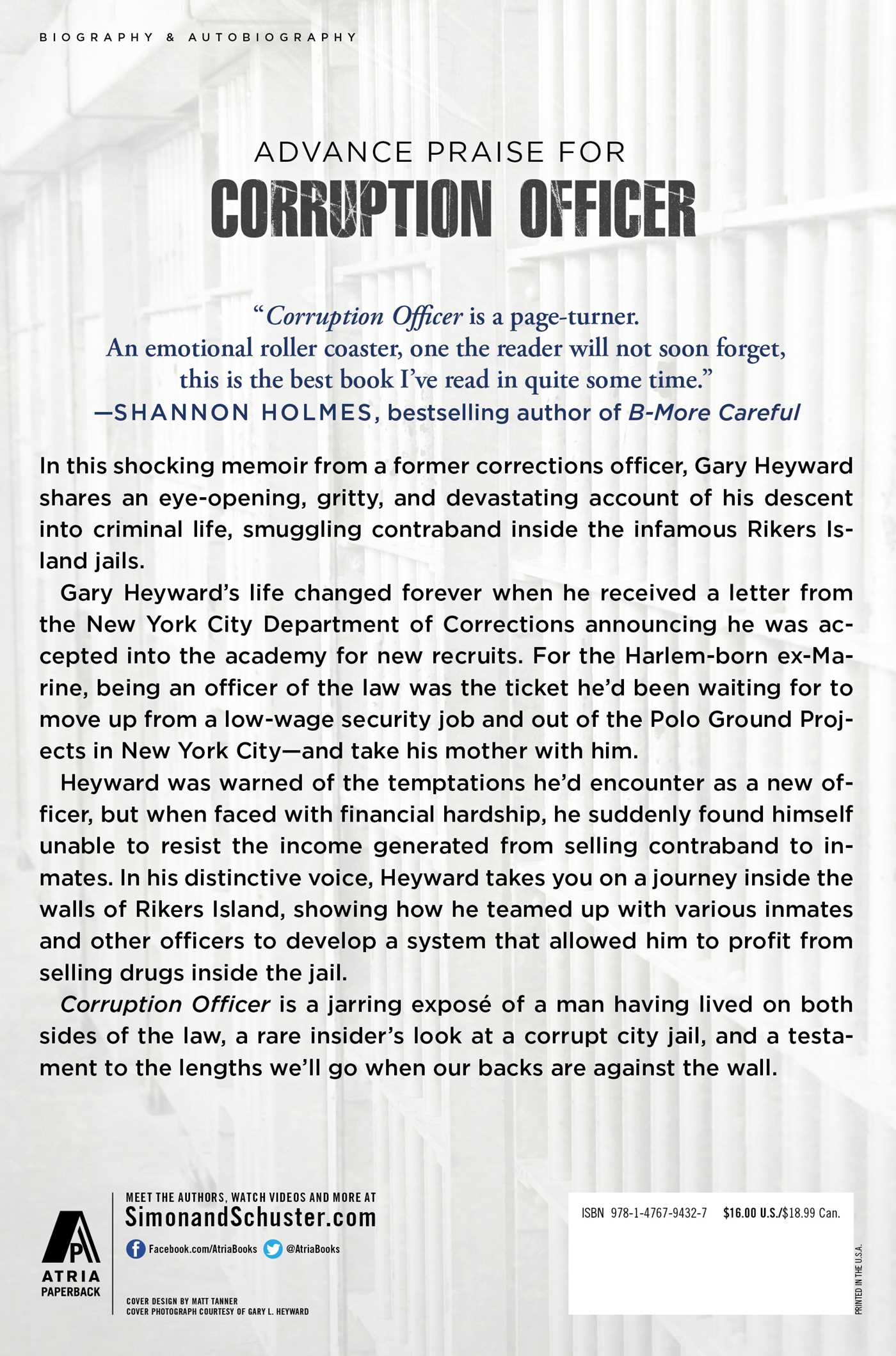 From Jail Guard to Perpetrator Inside Rikers Island

In this shocking memoir from a former corrections officer, Gary Heyward shares an eye-opening, gritty, and devastating account of his descent into criminal life, smuggling contraband inside the infamous Rikers Island jails.

Gary Heyward’s life changed forever when he received a letter from the New York City Department of Corrections announcing he was accepted into the academy for new recruits. For the Harlem-born ex-Marine, being an officer of the law was the ticket he’d been waiting for to move up from a low-wage security job and out of the Polo Ground Projects in New York City—and take his mother with him.

Heyward was warned of the temptations he’d encounter as a new officer, but when faced with financial hardship, he suddenly found himself unable to resist the income generated from selling contraband to inmates. In his distinctive voice, Heyward takes you on a journey inside the walls of Rikers Island, showing how he teamed up with various inmates and other officers to develop a system that allowed him to profit from selling drugs inside the jail.

Corruption Officer is a jarring exposé of a man having lived on both sides of the law, a rare insider’s look at a corrupt city jail, and a testament to the lengths we’ll go when our backs are against the wall.

“Alright, nobody move!” he said, as he went around the table to collect the money from the bettors.

The game was C-low and at this time my man Fungler was at the top of his game again. It’s a Friday night, payday, and I have every dime in the bank (the bank is the guy who takes the money for bets) on Fungler. I gave him that name because that’s what he yells every time he shoots the dice. I’m his hype, motivating him when he shoots and antagonizing the other bettors around the table to bet against him. Whenever he’d win we both made money. Lately Fungler was on a roll.

Fungler and I would be on our bullshit as usual. When Fungler would get the dice he’d shuffle them, then shake them in his hand. I’d be beside him screaming, “Thrilla in the manila dilla!” He’d shake his head indicating “no.” Then I’d scream, “Feva in the Funkhouse!” He’d shake his head again indicating “no.” Then I’d scream, “Rumble in the Jungle.” Then Fungler would say, “Rumble in the jungle without the fungle kungle,” while simultaneously releasing the dice and watching them register. Every time we did this routine, we’d hear the houseman yell, “HEAD CRACK!”

People who had bet against him would put their heads down or have the shit-face (upset facial expressions). Then a cheerleader from the side would yell, “Double or nothing, I bet he can’t do it again!” A cheerleader is a person on the sidelines with no money, talking shit about somebody else’s money! Fungler gets the dice, but before we go into our routine, in walks Chuck.

Chuck’s money is long. He has a lot of it. Every time Chuck comes in, muthafuckas who are scared, and have the bank with a lot of money in it, normally pass it to the next bettor. They don’t want to take a chance of losing it all in one shot. Everybody knows Chuck will stop up your bank—putting a large amount of money down on a bet equal to or more than what you have.

Everybody knows the routine, but not Fungler. Fungler’s eyes lit up. He hollered at Chuck, “Get down, nigga. I know you ain’t come here to sightsee!” Fungler looked at me with a shit-eatin’ grin like, “I got this nigga!” I looked at him like, “Muthafucka, just pass the bank!” Then somebody on the side said, “Look at this STD (scared-to-death) ass nigga!” and everybody laughed.

Yes, scared ass nigga, a person who tries to gamble with the big dawgs but really has a low-paying security job, and has no business being at the gambling spot in Harlem, or anywhere else for that matter, ’cause he knows that he is living PTP (paycheck to paycheck). If he loses his money this payday Friday night, he will be like Sidney Poitier in A Raisin in the Sun when Willie runs off with all that money.

“Willie, don’t do it, Willie, not with that money, Willie!”

Yes, scared nigga. That would be me! Gary, Gee, Big Hey. It all depends on who is calling me. My momma calls me “Boy” or “Nutmo,” aka scared nigga!

So Chuck dropped his stack. And Fungler started talking shit, saying, “After this roll all you working niggas are going to be sick! You’re gonna throw up on your way to the ATM! I love taking a nine-to-five nigga’s money, but taking a hustler’s money is like winning ten thousand dollars on one of those scratch tickets. What is that?” Fungler asked the crowd.

Everybody except me. I was busy trying to get this nigga’s attention to pass that muthafuckin’ bank! Fungler continued to shake the dice, ridiculing Chuck.

“Taking a hustler’s money is like going to Rent-A-Center, getting a whole bunch of shit delivered to your apartment, then moving to Brooklyn!”

Again, everybody laughed, except me. I was still in scared nigga mode!

“Getting his money is like going up in a bitch raw dog and not worrying about kids ’cause she got her tubes tied!” Fungler continued, and said, “What’s that?”

“FREE MONEY!!” They all laughed.

I’m over here figuratively sharting on myself, like when you think you have to fart but mistakenly shit on yourself instead. Chuck screamed out, “Nigga, would you stop walking the cat walk and just roll the muthafuckin’ dice!” Fungler shook them, then looked at me. Man, listen, the look I gave him was not a confident one. I did not even play with this nigga.

Fungler threw the dice. It seemed like it took an eternity as they flew past my face. At that moment all I could think about was my kids asking me for Michael Jordan sneakers, my past-due rent. Mom Dukes ain’t taking no shorts on rent. If I lose, how am I going to get to work next week? Willie, don’t do it!

The dice hit the wall and registered one-one-six! Fungler screamed, “HEAD CRACK!” I momentarily blacked out, then came back screaming, “NIIII-ZZIIIII-GAA!” After the house collected the money, totaling about sixty-six hundred dollars, I went over to Fungler and copped out, saying, “Yo, man, I gotta go.” So Fungler passed the bank. We split the dough. I tore the door off its hinges getting the fuck out of there.
Gary L. Heyward

Gary Heyward was born and raised in New York City’s Polo Ground Projects in Harlem. At the age of nineteen, he joined the United States Marines and became a decorated war veteran by serving in Desert Storm/Desert Shield Operation in 1990–1991. After receiving an honorable discharge he served as a New York City corrections officer, working ten years at Rikers Island. In May of 2006 Gary was arrested and convicted for selling drugs throughout the jail. During his incarceration he developed a passion for writing and penned his memoir, Corruption Officer. He was released in 2008 and currently works for the city of New York.

"A raunchy tell-all and a critical portrayal of Rikers Island."

“Corruption Officer is a page turner. Gary Heyward's words flow from one page to the next. This book is an emotional roller coaster, one the reader will not soon forget. The best book I've read in quite some time.”

“Eye-opening page-turner . . . . A brutally-honest confessional exposing the ugly underbelly of an American incarceration system that nobody really wants to take a long, hard look at.”

“A good read . . . . Definitely something you can breeze through in a weekend.”

From Jail Guard to Perpetrator Inside Rikers Island