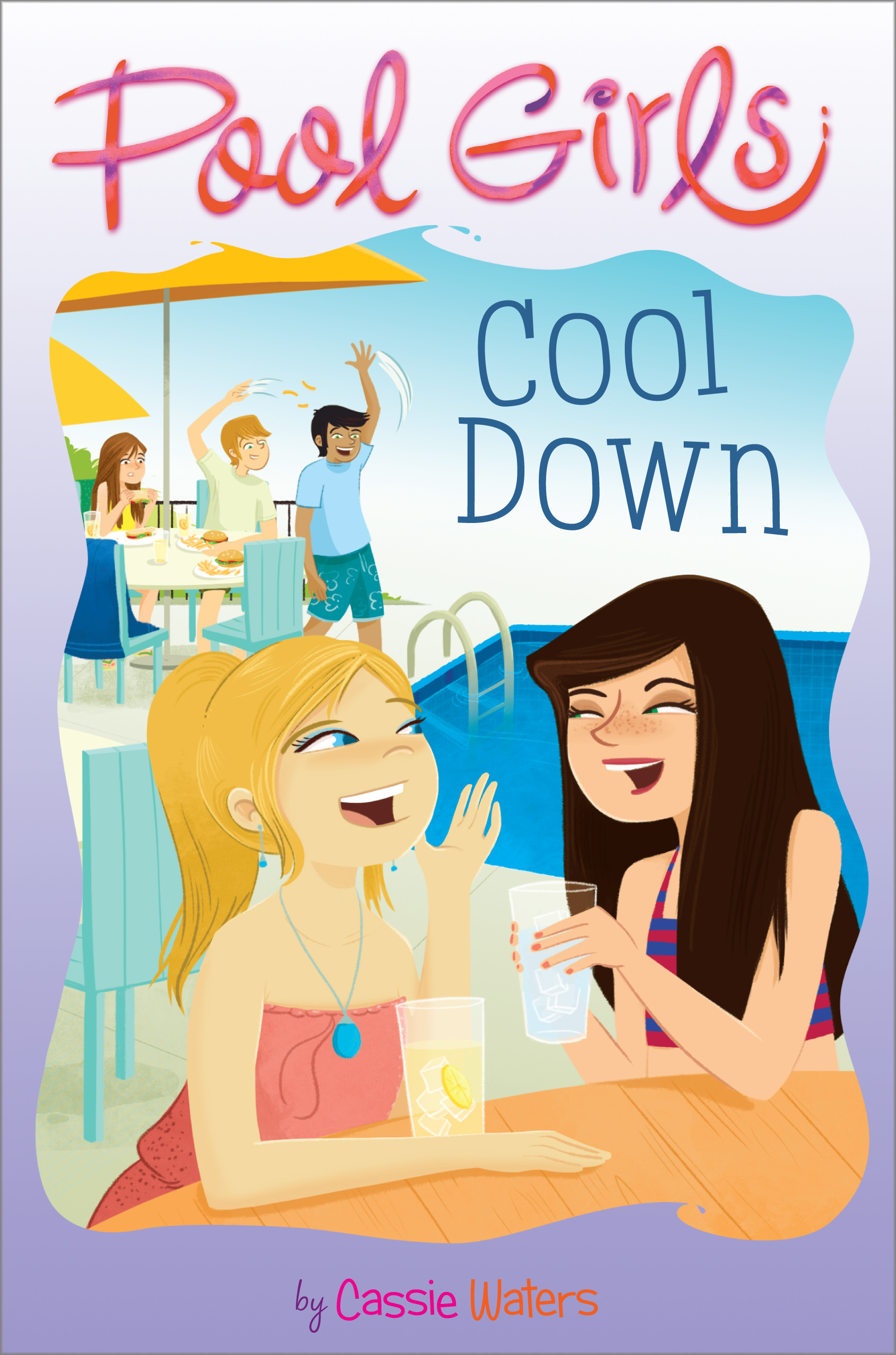 As summer ends, a new poolside friendship is formed—one that could lead to trouble—in this addition to a tween series that puts drama in the deep end.

Labor Day is just around the corner. Swim team is over, and many of the Riverside Swim Club regulars have gone away for the last days of summer. And some kids are returning from their summer vacations—kids like Nikki Angelo. Nikki is just the kind of funny and carefree friend Christina is looking for now that Grace has shown her true colors, and it isn’t long before Christina and Nikki become super close. But when Nikki starts bending the rules, Christina starts getting into major trouble. Will Christina realize who her real friends are before it’s too late?

Latest issue of Rocker magazine, to show that she was as hip as the next girl? Check.

Expensive new leather flip-flops that she’d conned Dad into buying for her, knowing Mom would say no? Check.

Hottest guy in the Western Hemisphere just outside, who might just possibly, finally, notice she was alive? Check. Christina smiled ruefully. Of course Mike was out there. He was on his zillionth lap of the day, no doubt.

Christina did a little twirl in front of the locker room mirror, since no one else was in there. Yes, she had to admit, she looked pretty good in her new metallic-silver tankini, and she was having a great hair day. She clicked on her phone for perhaps the seventeenth time that day to reread Veronica’s text from last night:

I asked MM if he liked anyone. Don’t be mad. He said maybe kind of sort of but he wasn’t positive. Progress?

Christina sighed. It was hard to know where things stood with Mike Morris. He was definitely the Strong, Silent Type. But she considered Veronica’s text a step in the right direction.

She opened her bag to put her phone away when it buzzed in her hand. She clicked on the message. It was from Veronica.

Bad news. Sit down before you read my next text.

Christina stared at the text and then slowly lowered herself down onto the bench as though it were a too-hot bath. She texted back:

I’m out here on the pool deck and so is MM. He’s brought a friend. A girl.

Christina blinked at the words on her phone screen. That couldn’t be possible. Veronica must have it wrong. Yesterday Mike had asked her if she’d be out at the pool today. That was as close as he got to asking her if she wanted to hang out with him. Why would he show up with another girl? There had to be some reasonable explanation. She texted Veronica:

OK, thanks. I’ll do some recon before I come out. C U soon.

She took a deep breath and stood up. Only one way to find out—she’d have to spy. In the bathroom area there was a high window, and it looked right out onto the pool. After peering under the stall doors to be double sure no one was in there, she brought a chair over and stepped onto it, stood up carefully, and leaned toward the wall so she could see out.

She didn’t have a great view, but she could definitely see at least a third of the pool. Mike wasn’t in any of the lounge chairs. Knowing him, he’d be in the water. She waited. Moments later, a swimmer powered across the pool and came to a stop at the end. His shiny brown head emerged and he swept his wet hair out of his face. It was Mike. She would know those muscular arms anywhere. He was talking to someone out of her sight line. Now he was laughing. He usually didn’t laugh that hard. Here came another swimmer, someone under the water. A head popped up, long blond hair, shining like diamonds in the bright sunlight. It was a girl. Christina watched as the girl dove back under the water, popped up again right next to Mike, and tried to push him down into the water by his shoulders. Laughing again, he casually peeled her delicate hands off his shoulders and playfully shoved her to the side. Now they were both laughing.

She heard the door open in the other room. Someone was coming into the locker room. Christina scrambled down off the chair, hurried out of the bathroom area, and nearly ran smack into Grace Davis.

“Oh!” said Grace, taking a step back and regarding Christina. “Hi.”

“Hi,” said Christina. Her thoughts were whirling. Grace was the last person she felt like seeing at a time like this. After the big fight the two old friends had a few weeks ago, they’d barely nodded hello to each other since, and Christina was not exactly in the mood for idle chitchat with her right now.

“You okay?” asked Grace as she smoothed her hair out in the mirror. “You look a little… upset.”

“Hi, Grace! Hi, Christina!” Kimmy came into the locker room with her little sister, Emily. Kimmy was one of the younger girls on the swim team. Emily looked about six. “Hey, Grace, congratulations on winning Best New Diver at the swim team banquet last week.”

Grace smiled, her braces glinting. Christina wished for her sake Grace would go for a different band color than green. It just seemed so, well, childish.

“Thanks, Kimmy,” said Grace. She shot Christina a look. Christina didn’t care. She wasn’t about to congratulate Grace. Grace’s head was way too big already, after all the praise she’d gotten for her diving talent this summer.

“So are you guys just hanging out together today?” asked Kimmy.

“No,” said both girls at the same time.

“I’m meeting Veronica here,” said Christina. “She’s leaving for vacation in a couple of days. Along with the rest of the universe,” she added bitterly. It was true. Besides Grace, Christina felt like the last girl on earth not to be on vacation. Everyone was away. She’d been getting giddy text messages from both Ashley and Lindsay, her friends from school, who were at their respective fabulous beach houses and who seemed to be having the best summers of their lives. It hadn’t been so bad when she’d thought she might have Mike Morris to spend quality time with. But now everything looked bleak. And even Grace had more of a life than she did—she always seemed to be with her sort-of boyfriend, Justin.

“I’m looking after Emily today,” said Kimmy, rolling her eyes. “Come on, you. Let’s get changed. See you guys.” Kimmy proceeded into the dressing area with her sister.

Grace and Christina stood there awkwardly. Finally Grace spoke. “Justin and I are working on some new dives today.”

Christina nodded, but she couldn’t come up with anything to say about diving. More silence. “Well, guess I’ll be going,” said Christina, turning to leave.

Veronica burst into the locker room. “So did you see her?” she asked Christina, then noticed Grace. “Oh! Hey, Grace! I didn’t know you were here! Congratulations again on your award!”

Grace smiled. “Hey, Veronica. Thanks. Congratulations to you, too. I think our winning the medley relay might just be one of the high points of my life so far. Who are you talking about?”

Christina cringed inwardly. Grace could be so annoying sometimes. Couldn’t she see that this might be a private conversation between her and Veronica?

“Mike Morris showed up with a superpretty girl,” said Veronica to Grace. “They’re out in the pool together right now. I’ve never seen the guy look like he’s having this much fun.” She darted a glance at Christina, as though she just realized what she’d said might have been insensitive. “Sorry. I just meant…”

“All right,” said Veronica. As she opened the locker room door, she turned back to address Grace. “Hey, Grace. My dad is letting me treat my friends—what’s left of them not on vacation, that is—to lunch at the snack bar tomorrow. Are you around? We can have all the curly fries we can eat!”

Grace smiled gratefully. “Thanks, that’s nice of you. I’ll ask him.” She flung her bag over her shoulder and headed further into the locker room. Christina felt relieved. Now it was time for her and Veronica to scope out the Mike situation together.
Cassie Waters

Growing up, Cassie Waters spent every waking moment of every summer at her swim club (which was conveniently located at the end of her street). These days, Cassie lives in the suburbs of New Jersey, writing and editing books, hanging out with friends, and having lots of fun. Over the years, Cassie has written dozens of books, but the Pool Girls series is nearest and dearest to her heart. She doesn’t make it to the pool nearly as often as she would like these days, but she is still very good friends with the girls she used to hang out with at her swim club.