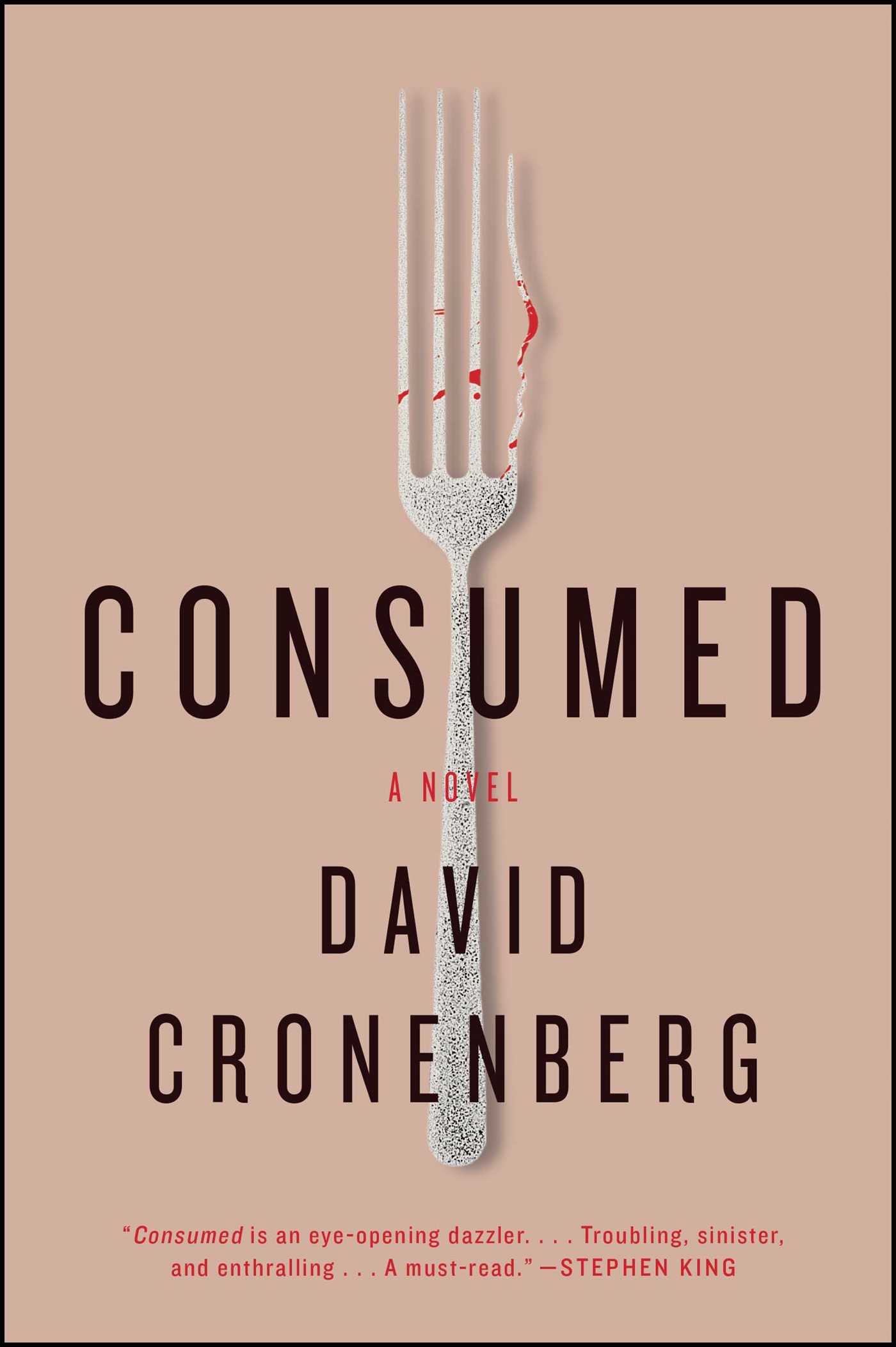 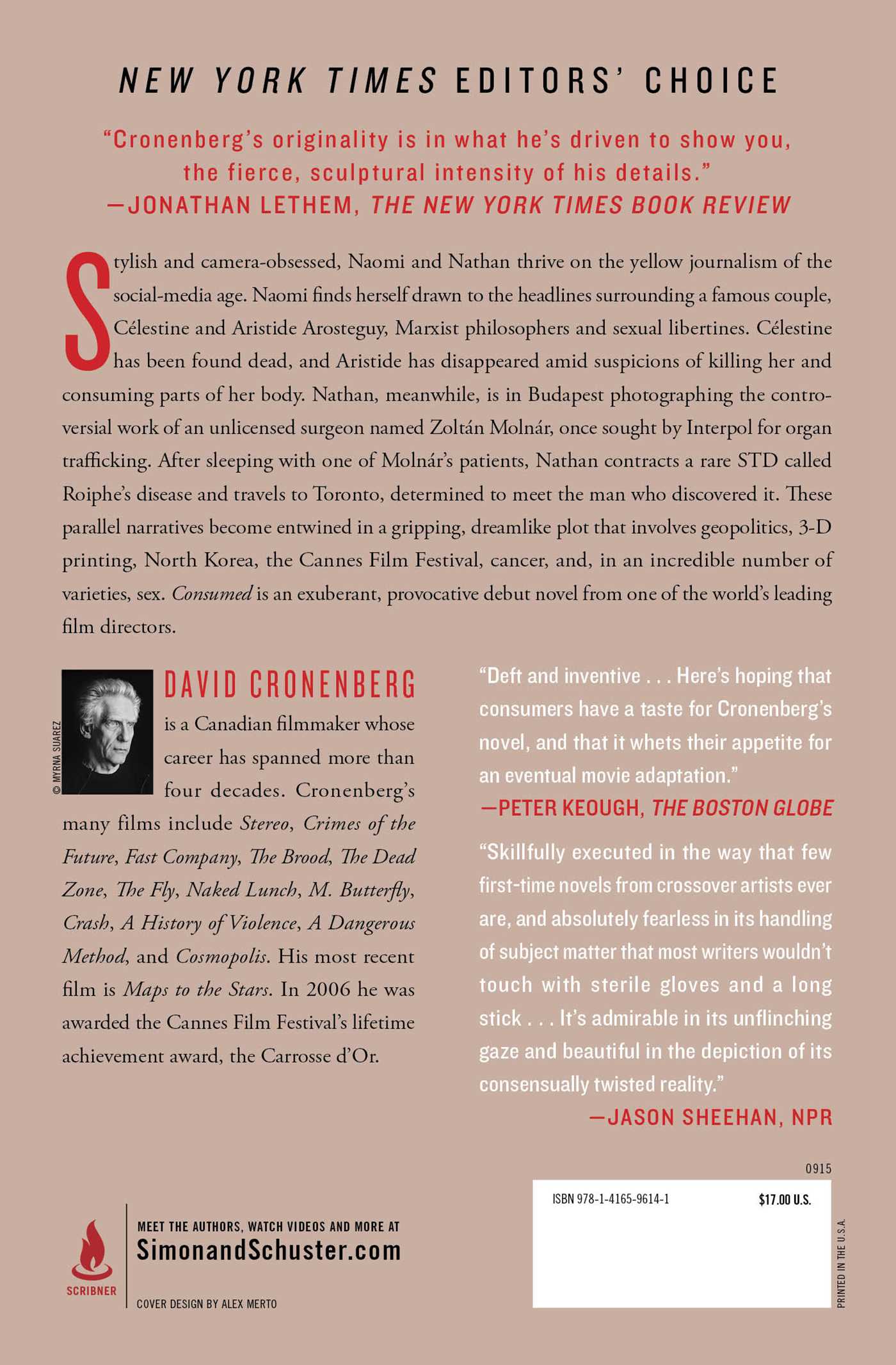 By David Cronenberg
LIST PRICE $17.00
PRICE MAY VARY BY RETAILER

“An eye-opening dazzler” (Stephen King) about a pair of globetrotting, gore-obsessed journalists whose entanglement in a French philosopher’s death becomes a surreal journey into global conspiracy from legendary filmmaker David Cronenberg.

Stylish and camera-obsessed, Naomi and Nathan thrive on the yellow journalism of the social-media age. Naomi finds herself drawn to the headlines surrounding a famous couple, Célestine and Aristide, Marxist philosophers and sexual libertines. Célestine has been found dead, and Aristide has disappeared. Police suspect him of killing her and consuming parts of her body. Yet Naomi sets off to find him, and as she delves deeper into the couple’s lives, she discovers the news story may only skim the surface of the disturbing acts they performed together.

Journalist Nathan, meanwhile, is in Budapest photographing the controversial work of an unlicensed surgeon named Zoltán Molnár, once sought by Interpol for organ trafficking. After sleeping with one of Molnár’s patients, Nathan contracts a rare STD called Roiphe’s and travels to Toronto, determined to meet the man who discovered the syndrome. Dr. Barry Roiphe, Nathan learns, now studies his own adult daughter, whose bizarre behavior masks a devastating secret.

These parallel narratives become entwined in a gripping, dreamlike plot that involves geopolitics, 3-D printing, North Korea, the Cannes Film Festival, cancer, and, in an incredible number of varieties, sex. Consumed is an exuberant, provocative debut novel from one of the world’s leading film directors, a writer of “fierce sculptural intensity” (Jonathan Lethem, The New York Times Book Review) who makes it “impossible to look away” (Publishers Weekly). 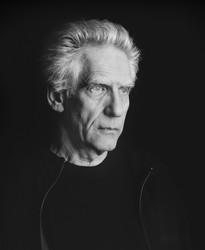 David Cronenberg is a Canadian filmmaker whose career has spanned more than four decades. Born in Toronto, Canada, Cronenberg was inducted onto Canada’s Walk of Fame in 1999. In 2002, he was made an Officer of the Order of Canada, and in 2006 he was awarded the Cannes Film Festival’s lifetime achievement award, the Carrosse d’Or; he is also an Officer in France’s Order of Arts and Letters (1990), and a Chevalier in its Legion of Honor (2009). Cronenberg’s many feature films include Stereo, Crimes of the Future, The Dead Zone, The Fly, Naked Lunch, M. Butterfly, Crash, A History of Violence, A Dangerous Method, and Cosmopolis (an adaptation of Don DeLillo’s 2003 novel). His most recent film, A Map to the Stars, starring Julianne Moore, Joan Cusack, and Robert Pattinson, opened at the New York Film Festival in Fall 2014.

"Consumed is an eye-opening dazzler. Not for the fainthearted, but for those of us who relish a trip into the shadowy depths, a must-read. Cronenberg's novel is as troubling, sinister, and as enthralling as his films."

"Classic Cronenberg! Who else can tell such a frightening, thrilling, shocking story about the nexus of the spirit and the flesh? Consumed will, well, consume you."

"Coming from David Cronenberg, the originality, wit, preoccupation with technology, and uncompromising carnality of Consumed should come as no surprise. He will probably be accused of every sin that can be invented to compensate for human fear of mind and body. This fiercely original book, with the scope and poetic exactitude of Nabokov's best work, has the power to unsettle, disarm, and finally make the reader absolutely complicit."

"An astonishing, seamless continuation of what I call his peerless novelistic film oeuvres. With Consumed, he has become the definitive heir, not just of Kafka and Borges, but of Cronenberg himself."

“Cronenberg may be best known for his films, but this cool, unsympathetic examination of self-absorbed intellectuals shows that his skills as a prose author are not to be discounted. . . . Readers will find it impossible to look away from the grotesque spectacle.”

“Cronenberg is a gangbusters novelist. His dense, aristocratic prose is saturated with details of technology, sex, and disease . . . and every salacious bit is elevated to a thing of perverse beauty. Let’s hope Cronenberg makes this book-writing thing a priority."

"Those who enjoyed Naked Lunch will find much to like here."

"Cronenberg's approach to narrative is sturdy and direct... His originality is in what he’s driven to show you, the fierce sculptural intensity of his details and his willingness to linger."

“Consumed does not disappoint. It compiles a lifetime of obsessions and observations about the merging of man and machine, the fascinating horrors of metamorphosis, the intertwining of sex and death, the anatomy of rage, and the mechanics of social downfall… Cronenberg is a deft and inventive writer. He is fearless in drawing characters who are flawed or depraved but also complex and comprehensible."

“Cronenberg is doing some complicated things with storytelling and truth in Consumed—things that only a novel could accommodate, at least on this grand of a scale… Compelling."

“It’s good – disturbing…skillfully executed in the way that few first-time novels from crossover artists ever are and, more than that, absolutely fearless in its handling of subject matter that most writers wouldn't touch with sterile gloves and a long stick… It's admirable in its unflinching gaze and beautiful in the depiction of its consensually twisted reality.”

By David Cronenberg
LIST PRICE $17.00
PRICE MAY VARY BY RETAILER