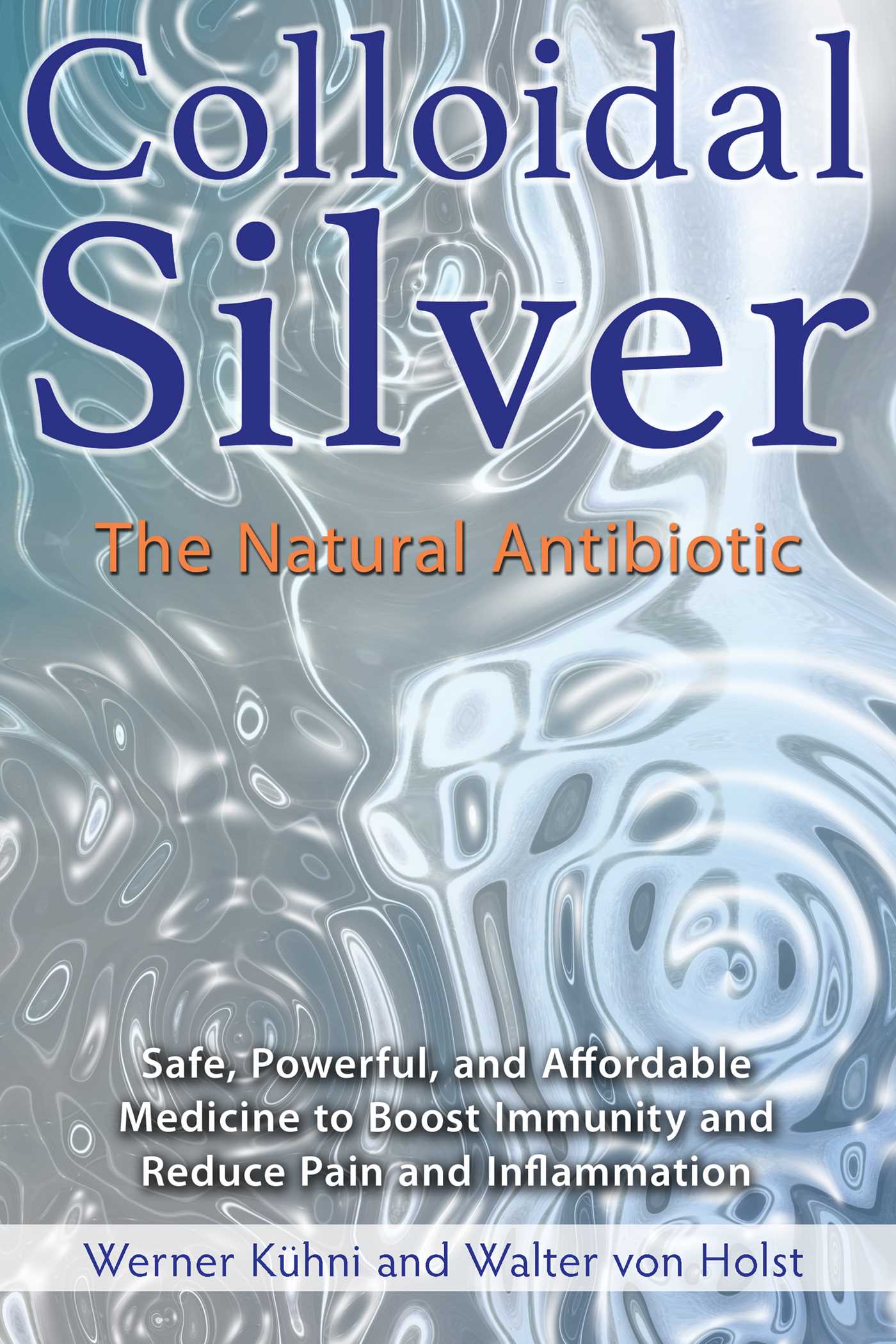 • Details the correct dosages and applications of colloidal silver, including the proper “parts per million” (ppm) for acute treatments and daily use

• Looks at the latest scientific studies from UCLA Medical Center, Temple University, and other well-known institutions

Colloidal silver was widely used as a natural antibiotic and antiviral until the mid-20th century when its use was overshadowed by the development of pharmaceutical antibiotics. Now with the rise of antibiotic-resistant infections, colloidal silver has reentered the sights of medical researchers, alternative health practitioners, and those looking to take control of their own health.

In this practical guide, the authors explore the many uses and benefits of colloidal silver for boosting immunity, reducing pain and inflammation, and treating more than 80 common diseases and conditions, including eczema, acne, thrush, flu, asthma, hay fever, mastitis, canker sores, gingivitis, and conjunctivitis. Citing scientific studies from UCLA Medical Center, Temple University, and other well-known institutions, they reveal how colloidal silver works against bacteria, viruses, and fungi, including strep, staph, and candida, often in a matter of minutes. They examine how it accelerates the healing of cuts and bruises and how it can also be used to treat our animal companions. They explore its use, with no side effects, in the treatment of diseases of the eyes, skin, mouth, respiratory tract, and digestive tract as well as in the treatment of cancer.

Debunking concerns about colloidal silver and argyria, the “blue man” phenomena associated with silver intake, the authors detail the correct dosages and applications of colloidal silver, including the proper “parts per million” (ppm) concentration for each ailment and for daily use. They explain what to look for when purchasing colloidal silver as well as how to make it at home. They also explore the long history of silver in folk medicine, including its use by Hildegard von Bingen, and its use in homeopathy, crystal healing, anthroposophic medicine, and spagyrics.

Scientific Evidence for the Medicinal Use of Silver

The Antimicrobial Actions of Colloidal Silver

Colloidal silver works like a broad spectrum antibiotic against bacteria and quickly kills all single-celled parasites, viruses, and fungi as well. It is effective against almost 650 different pathogens. The tiny silver molecules penetrate single-celled microbes and block the enzyme responsible for oxygen recovery. The parasites’ metabolisms fall victim and they die. Based on experiential evidence, undamaged skin cells and healthy bacteria are not damaged by colloidal silver treatment, though currently no convincing explanation exists for silver’s ability to discriminate between healthy cells and pathogens. To support healing, probiotics can be taken during and after treatment with oral colloidal silver for the building up of intestinal flora. A further advantage of colloidal silver is that pathogens do not develop resistance to it.

• Colloidal silver kills viruses presumably through the building of DNS- and/or RNA-silver complexes or destruction of a nucleic acid.

• It kills single-celled organisms, plasmodia, and fungi, including their spores; the mechanism of attack works through an inhibition of phosphate intake and exchange through porous cell membranes.

• It buffers an overactive immune system by suppressing the histamine and prostaglandin distribution in allergic and inflammatory reactions.

• It works as an astringent on open wound surfaces, substantially accelerating healing. The skin remains elastic and tears noticeably less at stress points.

• It reacts to free radicals in the body and binds surplus electrons; thus it protects against poisoning during heavy metal stress.

In spite of this specious debate, we believe that colloidal silver does have the power to kill pathogens such as viruses, bacteria, singlecell organisms, and fungi in vitro. No bacteria are known that are not eliminated within six minutes by an application of colloidal silver with a concentration of 5 ppm per liter. According to Robert O. Becker, M.D., all pathogenic microorganisms that have become antibiotic resistant can be killed through the administration of colloidal
silver.

Colloidal silver shows an antimicrobial effect and inactivates most bacteria and fungi even in small doses by hindering the metabolism of these microorganisms. The disruption primarily affects sulfurous groups of specific amino acids and proteins, which are subsequently inactivated.

This mechanism of action, which is described as an oligodynamic effect, occurs not only with silver but also with other metals such as mercury, copper (and their alloys brass and bronze), zinc, iron, lead, bismuth, gold, and osmium.

Swiss botanist Carl Wilhelm von Hägeli (1817-1891) discovered the oligodynamic effect, stating that in nature some metals have shown that in small doses they have highly antiseptic effects on almost all bacteria, fungi, and other pathogens.

Silver is the most antiseptically effective, and it simultaneously does not have a negative influence on the more highly evolved cells of people and animals.

The ability to simultaneously attack cells at varying levels of cellular metabolism explains the wide-spectrum antimicrobial effect of silver and silver compounds.

The strongly antimicrobial effects of colloidal silver are connected to these properties, as it can penetrate cell walls and membranes and work in the cell interiors. In vitro, colloidal silver has demonstrated that it also works against viruses. The silver particles bind to their surfaces and suppress the binding of viruses onto host cells.

The Range of Indications for Colloidal Silver


Colloidal silver is indicated for a wide range of healing applications.

• Colloidal silver can be used as eyedrops in cases of conjunctivitis, keratitis, tear duct inflammation, and styes in the eye.

• Colloidal silver can be taken for protection against contaminants,for heavy metal recovery, and for detoxification. Silver binds with metallic mercury so that it can be easily excreted through the kidneys; stored organic mercury cannot be excreted.

• Colloidal silver can be used as a rinse for fungal thrush in the mouth.

• Colloidal silver drops can be used to treat all inflammatory and purulent conditions in the mouth and gums, the breathing passages, and the digestive tract as well as all infectious skin diseases and all skin infections, including infections of the nail bed.

• Colloidal silver can be used in the form of deep inhalation with a fine nebulizer for chronic lung diseases, bronchitis, croup, or inflamed lung conditions.

• Colloidal silver has a cooling and soothing effect when applied to all allergic and atopic skin conditions as well as to burns, including sunburn and radiation damage. It softens the skin, reduces pain, and accelerates regeneration.

• Colloidal silver can be used to treat the inflammation and diseases of female and male genitalia, including the prostate.

• Colloidal silver can be applied locally for skin fungi, insect bites and stings, and warts as well as taken internally for improvement of the total microbiome of the digestive tract.

• Colloidal silver can be taken internally for strengthening a weakened immune system.

• Colloidal silver can stimulate a variety of catalytic processes and enzymes in the body.

New reports are emerging in regard to the treatment of various cancers, difficult infectious diseases, and a variety of physical disturbances. These reports must be checked out and verified, and the role of colloidal silver clarified in the treatment of these serious conditions, but it does appear that silver has a positive role to play.
Werner Kühni

Werner Kühni is a naturopath and psychotherapist with training in homeopathy, healing stones, and essential oils. The author of several books, he lives in Germany.

Walter von Holst is an expert on crystal healing and runs the Steinkreis center in Stuttgart, Germany, which offers courses on stones, crystals, and holistic health.

“This is the most authoritative and insightful guide to the curative and healing powers of colloidal silver. The authors offer a practical and systematic protocol for addressing common acute and systemic complaints. A must for every household and health care practitioner.”

“This book is a complete, thorough, but very readable presentation of the wonderful antibiotic and anti-inflammatory properties of Colloidal Silver!”

“Colloidal Silver is one of the cheapest and most effective home remedies I have ever used. I’ll be using this book as a reference guide for many years to come.”