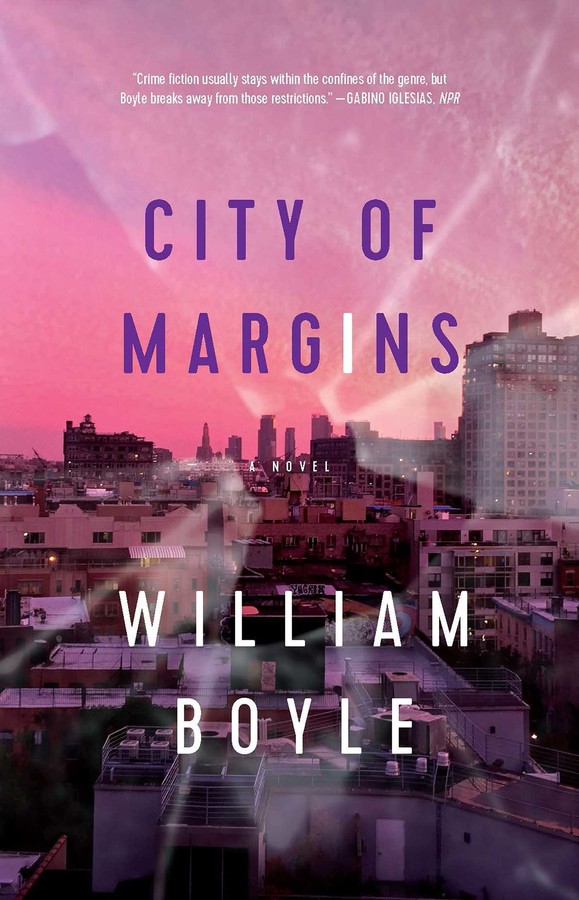 A vivid new cast of characters collide in gritty 1990s Brooklyn, in this latest from acclaimed neo-noir author William Boyle.

In City of Margins, the lives of several lost souls intersect in Southern Brooklyn in the early 1990s. There’s Donnie Parascandolo, a disgraced ex-cop with blood on his hands; Ava Bifulco, a widow whose daily work grind is her whole life; Nick, Ava’s son, a grubby high school teacher who dreams of a shortcut to success; Mikey Baldini, a college dropout who’s returned to the old neighborhood, purposeless and drifting; Donna Rotante, Donnie’s ex-wife, still reeling from the suicide of their teenage son; Mikey’s mother, Rosemarie, also a widow, who hopes Mikey won’t fall into the trap of strong arm work; and Antonina Divino, a high school girl with designs on breaking free from Brooklyn. Uniting them are the dead: Mikey’s old man, killed over a gambling debt, and Donnie and Donna’s poor son, Gabe.

These characters cross paths in unexpected ways, guided by coincidence and the pull of blood. City of Margins is a Technicolor noir melodrama pieced together in broken glass.

William Boyle is from Brooklyn, New York. His books include: Gravesend, which was nominated for the Grand Prix de Litterature Policiere in France and shortlisted for the John Creasey (New Blood) Dagger in the UK; The Lonely Witness, which is nominated for the Hammett Prize; and, most recently, A Friend Is a Gift You Give Yourself. He lives in Oxford, Mississippi.

“Boyle studies Donnie and his neighbors with a mixture of affection and despair worthy of a Bruce Springsteen song. He has a real thing for working-class folks. People like this, they need people like Boyle.”

Outstanding. Battered by loss and unrealized dreams, Boyle’s characters are vividly drawn and painfully real. Fans of literary crime novelists such as George Pelecanos and Richard Price will be highly rewarded.

A dark but moving portrayal of working-class lives that evokes the ‘kitchen-sink dramas’ of such mid-century British novelists as Alan Sillitoe. Eschewing sentimentality yet still managing to find embers of tenderness in these stunted lives, Boyle blends powerful social realism with a strong noir sensibility.

“City of Margins has a tsunami thrust to it.  It keeps coming at you and doesn’t let go. Tough and tumble, very readable.”

"A Jacobean revenge tangle in a Brooklyn where all the players have survived the same nuns. Even the most desperately lost of William Boyle's characters retain a hungry heart."

– John Sayles, writer/director of Matewan, Lone Star, and City of Hope, and author of Yellow Earth, A Moment in the Sun, and Union Dues

"A funny, gritty, touching narrative about the strength of three New York women caught in a world of abusive men, broken families, and mob violence. Crime fiction usually stays within the confines of the genre, but Boyle breaks away from those restrictions."

"A brilliant and nasty piece of joyful ambiguity that I Ioved deeply. What a marvelous and unexpected bunch of female characters, in particular. With this one, William Boyle vaults into the big time, or he damn sure should."

"As wildly funny and sweet as it is frenetic and harrowing, William Boyle’s A Friend Is a Gift You Give Yourself is full of dark splendor. Imagine Martin Scorsese and David O. Russell collaborating with Gena Rowlands and Ellen Burstyn and making magic."

– Megan Abbott, author of 'You Will Know Me' and 'The Fever' [praise for William Boyle]