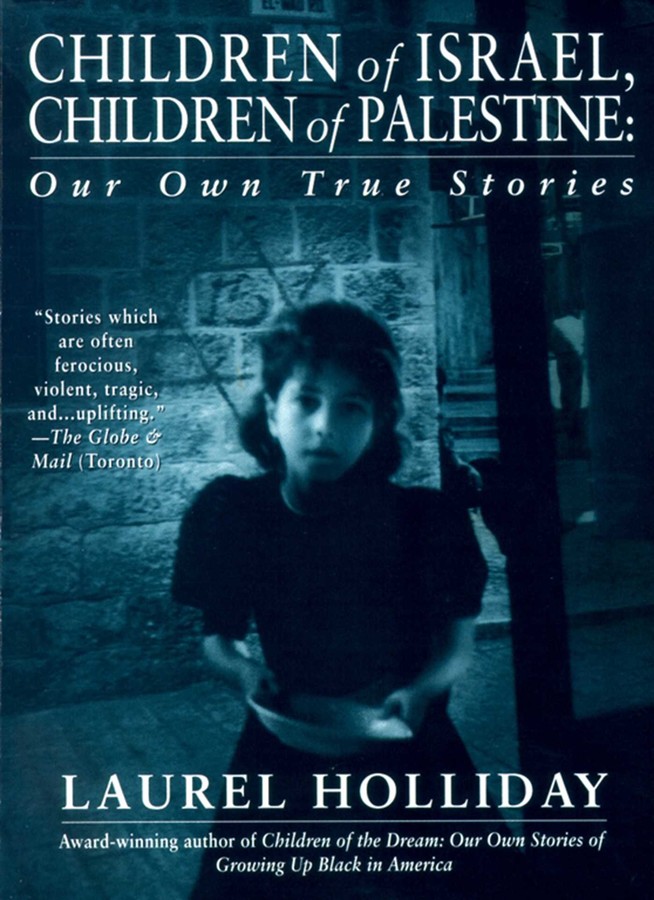 By Laurel Holliday
LIST PRICE $15.99
PRICE MAY VARY BY RETAILER

Israeli Jews and Palestinians appear side by side for the first time in this remarkable book to share powerful feelings and reflections on growing up in one of the world's longest and most dangerous conflicts. Here, thirty-six men and women, boys and girls, tell of their coming-of-age in a land of turmoil.
From kibbutzim in Israel and the occupied territories to Palestinian refugee camps in the West Bank and the Gaza Strip, Israeli Jews and Palestinians tell of tragedy and transcendence as they face their deepest fears and dream of a peaceful future. Listen to them as they recount stories of their brief and often violent youth.
No matter what their ethnic identity, how much and how long they have suffered, these courageous autobiographers most often reveal a deep longing for peace. Perhaps their hopes and fears are best illustrated by a parable retold by eighteen-year-old Redrose (a pseudonym):
"Two frogs got trapped in a jar of cream. They couldn't jump out of the liquid and they couldn't climb because the sides of the jar were slippery. One frog said, 'By dawn I'll be dead,' and went to sleep. The second frog swam all night long and in the morning found herself floating on a pat of butter."

Moshe Shamir
Seventy-six-year-old Moshe Shamir has been happily married for fifty-one years and has three children and four grandchildren. Born and educated in Israel, he has been a farmer in a kibbutz, a captain in the Israeli Army, and a member of the Knesset, the Israeli parliament. But mostly, Moshe Shamir is known as being a very prolific Israeli writer: his published works include twelve novels, three collections of short stories, and a number of children's books. In addition, twenty of his plays have been produced and published, and three movies have been made from his works. His writing has been featured in many anthologies.
As suggested in these passages of autobiography, Shamir feels very strongly about the importance of the building of Israel. His own parents were pioneers in Israel and he tells me that "the building of a country for a homeless people is, to my mind, the greatest event of the century." He believes that the only way that there will be peace in the Middle East is for there to be "the honest and indubitable acceptance by the Arabs of the existence of a strong and viable Israel among them....At the present, regrettably, I am afraid the Arab/Palestinian aim in what is called 'the peace process' is simply to weaken Israel."
Moshe Shamir is very widely read in Israel and has received every major literary prize there is to be won in that country. His work has also been translated into many languages, and the following novels are available in English: The King of Flesh and Blood, The Hittite Must Die, The Fifth Wheel, and With His Own Hands.
My Life with Ishmael, the autobiography from which the following excerpts were taken, (originally published in Hebrew in 1968), was published in English by Vallentine, Mitchell (London) in 1970.

No Other Storm
MY brother -- I knew in his life and in his death. To this day, twenty years after his death, he returns to me in my dreams at night, young and handsome and blond and blue-eyed as he was in life. And in my dream I want to embrace him and I dare not. A dreadful fear roots me to the spot -- lest I hurt his wounded body. And within that fear, a terrible joy -- that his death is a lie, a lie, a lie. I know what period of time I relive in my dream. It is a quarter of an hour, ten minutes: someone bursts into the Tel-Aviv office of the Haganah, the Underground [secret Jewish self-defense force], tells us about the seven at Yazur and blurts out his name, not knowing that Eli Shamir was my brother; then the man's shock and his saying: "Run to the Hadassah Hospital" -- then the moment when I enter the hospital's corridor and my father is sitting on the bench, encircled. Oh that it be a lie, a lie, a lie -- and it was the truth. They had summoned Father from his office. It was I who climbed the three floors to tell Mother.
Later, much later, an hour later, someone made the world's most banal and irritating remark to me, and the truest and most needed: "Think of your parents. You must be strong now."
Then, before they took the seven of them away, to lay them out beside the candles and the guard of honor in the barnlike gymnasium, before they took them, I saw him in the refrigeration room of the hospital mortuary -- and the dark blue hole in the clear white forehead. And on his face the look: mature, responsible, astonished.
They were killed in an open lorry after it had struck a mine. Injured and burnt they were murdered one by one, shot at close range. What were they doing in an open lorry in the street of an Arab village? They were driving out to inspect the road ahead of a convoy carrying passengers, food, medical supplies, fuel -- to Jerusalem.

On the festival of Succot in 1968 a few families went down to Eilat. We found a spot in the fenced-off camping ground of the Stella Maris Motel, pitched our tents, donned our bathing suits, and sent our children to swim in the sea. The spot was at the eastern extremity of the populated area of this oddly-modern Israeli town. It's a town where you walk out into the yard and you're in the desert. The distance from our camping ground to the houses of Jordanian Akaba was no greater than the distance to the center of Eilat. But the quietness over there was like the end of the world.
On the journey, as we hurled along the Arava road, we saw some unusual army activity; billows of smoke, a helicopter landing, parked jeeps on guard with their weapons at the ready. The evening news told us -- a mine. One killed. An incident. In the midst of all this, right next to the border, between incident and incident, three days of sunshine and self-indulgence and games and campfires and swimming and shell-gathering. To forget. To sink into a round of aimless activities. When cooking the soup becomes the main preoccupation, that's repose. And the children, we were sure, the children certainly...
The children, we were sure, the little ones, were basking in their own Garden of Eden. My son Eli and my niece Merav, a pair of little devils, founded a 'science-group' and were busy collecting things, making discoveries, fishing hopefully but unsuccessfully, sunbathing, disappearing when they were supposed to be eating the soup we spent so much time cooking -- in short: utter oblivion, relaxation, a world of eternal peace.
After our first night there, the little ones disappeared early in the morning. On their reappearance to the smell of coffee they were talking together in whispers. No tempting suggestion for passing the time could distract them. Not yet. They still had something terribly important (and terribly secret!) to arrange. My son went looking for paper. A large sheet. White paper. He scratched around and found some, apparently, because the next requirement was a pencil or crayon. What for, eh? -- it's a secret.
It went out of our minds, and there were plenty of other things crowding in, one upon the other, to explain the glint in their eyes as the hours passed on that glorious beach. All day the 'science-group' displayed particular interest in the water currents and prevailing winds in the bay. How do fishermen sail here? Does the wind always blow from the land towards the sea? Are there no currents drifting eastward? What, by the way, is the distance by sea to Akaba? I didn't connect all these items, until night came and in the silence, in the shelter of the tent, with his head poking out of his sleeping bag, my son couldn't contain himself any longer: "Daddy, d'you know what we did today? We made paper boats. Merav and I -- two boats. And we put them far out to sea to sail away. But first we wrote on the paper, Why don't you make peace with us? Dear soldiers of the Akaba Legion, why don't you make peace with us? Signed, a boy and a girl from Israel. Whoever finds this, please hand it to the Legion, Akaba."

Laurel Holliday, formerly a college teacher, editor, and psychotherapist, now writes full time in Seattle. She is the award-winning author of the Children of Conflict series: Children in the Holocaust and World War II: Their Secret Diaries; Children of The Troubles: Our Lives in the Crossfire of Northern Ireland; Children of Israel, Children of Palestine: Our Own True Stories; and Children of the Dream: Our Own Stories of Growing Up Black in America. Laurel Holliday is also the author of Heartsongs, an international collection of young girls’ diaries, which won a Best Book for Young Adults Award from the American Library Association.

Publisher's Weekly This compilation dramatizes the common humanity of the two peoples....A rich and moving collection....

By Laurel Holliday
LIST PRICE $15.99
PRICE MAY VARY BY RETAILER