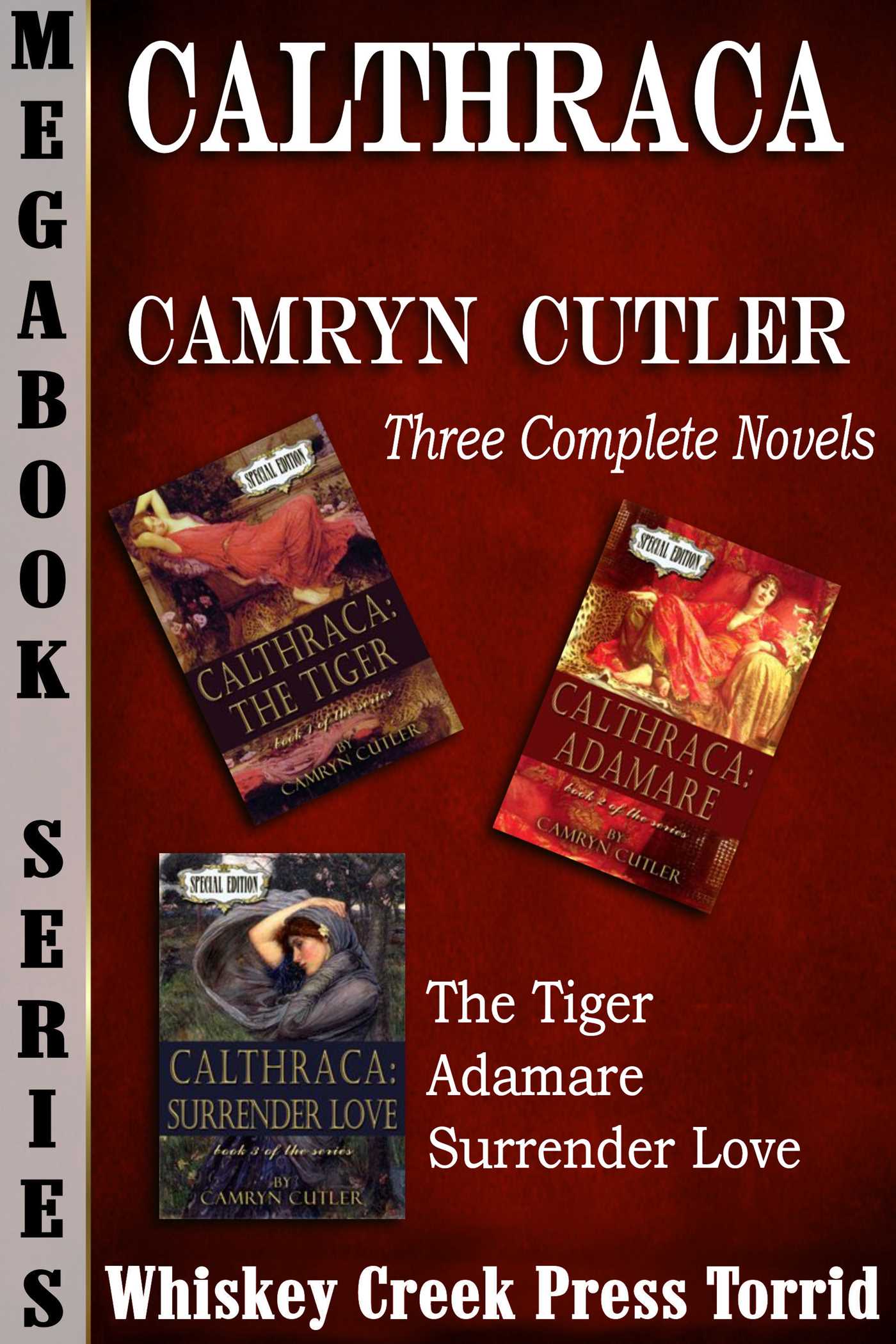 Part of Calthraca
By Camryn Cutler
LIST PRICE $4.99
PRICE MAY VARY BY RETAILER

THREE COMPLETE NOVELS, ONE MEGABOOK SERIES LOW PRICE! The first three novels in the incredible Erotic Romance Fantasy Series from author Camryn Cutler, including: CALTHRACA: THE TIGER Tengri Khan, Prince of the Eastern Plain, requires a wife to inherit his kingdom. A horseman and raider, his world consists of conquest and plunder. Used to taking what he wants, he finds his mate and kidnaps her. Princess Adama Fawkes is the young heiress of Lyros, next in line for the throne. Strong and determined, she is a formidable match for the man who has no idea that she will melt his frozen heart, and seize his very soul. CALTHRACA: ADAMARE Adama Fawkes, now Queen of Lyros, is far from home in a hostile land. Kidnapped by a ruthless bounty hunter and held prisoner for months, her throne and legacy are in jeopardy. To make matters worse, her daughter is missing. Adama's fate has been placed into the hands of her sister and now ruler, Eleana Draga, Empress of BasSalaam. Captive in her depraved and dangerous court, Adama must plan her escape and begin her search for Princess Oma. Kesim Trasain is a powerful sorcerer and Eleana's personal physician. He is also a spy for Minalos, placed in the court of the warlike Basaltic Empress. Sent to aid Adama, he does not yet realize that she is the woman fated to be his. When Adama and Kesim finally meet, their fated passion is consummated and their destiny is sealed. They escape captivity, but can their love and passion withstand the menacing threat which seems to await them at every turn along their journey? CALTHRACA: SURRENDER LOVE He was not the man fate intended for her.He had been her first lover, a man so masterful that he had held her life in the palm of his hand. When Tengri-Khan, Sehzade of Tartak died, Adama had wanted to die with him.Fifteen years later, an older and wiser Adama Fawkes has found her fated love in Kesim Trasain, her husband, a powerful sorcerer, and the man who would move heaven and earth for her. Settled comfortably into their happy life, they thought their journey was over, they thought they'd earned some peace. But fate had other plans.Tengri-Khan has returned and he wants his wife back. Once again stolen from her family, Adama is far too strong now to meekly accept Tengri's rule. Her fervent plans for escape, her hope and her heart are put to the test when she encounters Khalid Fariz, Saracen and assassin from Tengri's past. Determined and seemingly unstoppable, Fariz has set his sights on Adama, and his powerful charm threatens to overwhelm her.Can she escape both Tengri and Khalid and somehow find her way back to Kesim, or must she Surrender Love? Genre: Torrid Romance Fantasy Rating: Erotic Romance - Explicit (Contains adult content, language, and graphic sex)

Part of Calthraca
By Camryn Cutler
LIST PRICE $4.99
PRICE MAY VARY BY RETAILER

More books in this series: Calthraca