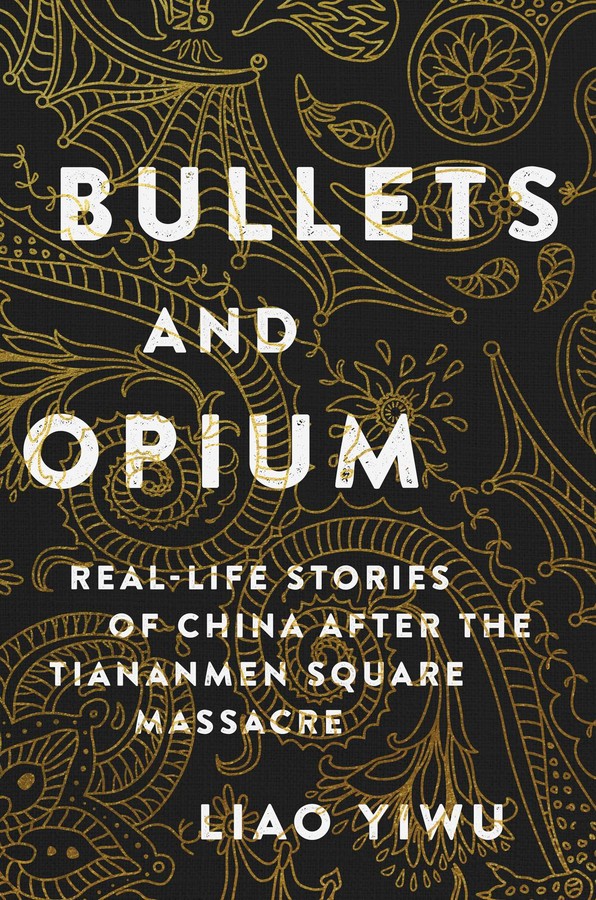 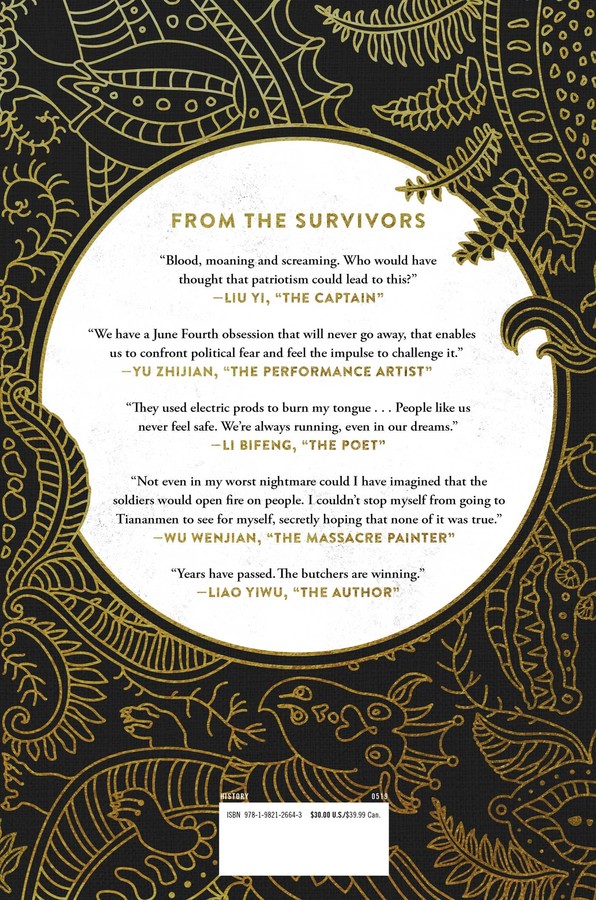 Real-Life Stories of China After the Tiananmen Square Massacre

“Moving…a memorable series of portraits of the working-class people who defended Tiananmen Square." —The New York Review of Books

“A series of harrowing, unforgettable tales...Had [Liao Yiwu] not fled the country in 2011, they may never have emerged. An indispensable historical document.” —Kirkus Reviews (starred review)

From the award-winning poet, dissident, and “one of the most original and remarkable Chinese writers of our time” (Philip Gourevitch) comes a raw, evocative, and unforgettable look at the Tiananmen Square massacre through the eyes of those who were there.

For over seven years, Liao Yiwu—a master of contemporary Chinese literature, imprisoned and persecuted as a counter-revolutionary until he fled the country in 2011—secretly interviewed survivors of the devastating 1989 Tiananmen Square massacre. Tortured, imprisoned, and forced into silence and the margins of Chinese society for thirty years, their harrowing stories are now finally revealed in this gripping and masterful work of investigative journalism.

It’s risky to pick turning points in world history, but it’s safe to say that the Tiananmen Massacre on the night of June 3–4, 1989, in downtown Beijing, was one of the most important of the past half century. At the time it was recognized as a momentous event—a bloodbath in the center of a world capital usually is—but three decades later its importance has only grown, marking the end of one China and the rise of today’s grim superpower.

For on that night, soldiers armed with automatic weapons and tanks smashed through crude barricades, killing hundreds, possibly thousands, of Beijingers trying to stop the troops from breaking up a student protest. The students had occupied the city’s gargantuan Tiananmen Square, calling for an end to corruption and official privilege and for a more open, freer society.

The students were flawed—as are most people, especially when they are eighteen or nineteen years old. Most had little idea of what they wanted. And some were arrogant. But they were well-meaning and idealistic, and many Chinese saw in them a hope for a better, more decent society. From across the country, Chinese traveled to Beijing to support them, wired them money, and wrote poems in their honor.

And so, on that fateful night, thousands of ordinary Beijingers ran out onto the streets to confront the troops. On several previous nights the government had also tried to clear the square but sent in unarmed troops. Locals talked them out of their attack and they returned to their barracks.

But this time around, China’s rulers decided to teach their subjects a lesson they wouldn’t forget. They sent in hardened troops with orders to shoot their way to the center of town. The carnage lasted hours and the city’s hospitals overflowed with the dead and dying. The message was clear: This will not be tolerated. Ever.

Since then, China’s course has been set: economic development, yes; an open society, no. The government has banned, arrested, and jailed people who tried to set up new political parties or even write about the need for change. It has brought the Internet to heel by deploying thousands of censors. And it has pushed its ambitions abroad by funding Western universities and think tanks and drawing up blacklists of people who mention its deeds. These are the bullets it uses to silence opponents.

The opium is the benefits of economic growth—the real prosperity that makes many people inside and outside of China wary of rocking the boat. For many around the world, China has become an alluring model, and its many apologists, including leading Western political leaders, happily eat from its trough.

So today we have a China that is richer than ever, boasting bullet trains and aircraft carriers, but politically stunted and often driven by nationalistic aims—an unhealthy mixture that has rarely turned out well in world history. It is a country for which 1989 did not mean the fall of communism as it did in Europe but rather is synonymous with a failed revolution.

And yet, for all of their importance, these events have never been told with much élan or vigor. We have deadening academic prose, policy-wonk jargon, but little to connect us with the people who made these events happen.

That is why this book is so important. It is not a definitive history of Tiananmen but something more compelling: intimate interviews with people who fought for the revolution, were jailed, and were then released to a country that had suddenly turned away from politics and embraced the deadening pleasures of consumer society and the cheap thrills of nationalism. That’s why this book is about more than the events of three decades ago; it is also a portrait of today’s unhappy and repressed China.

Our guide is Liao Yiwu, the most remarkable chronicler of real-life China to emerge from his country. He is something like a Chinese Studs Terkel, compiling oral histories of key turning points in his country’s history, but he has the maniacal fearlessness of the great Polish war correspondent Ryszard Kapus´cin´ski. He is funny, self-deprecating, and brutally honest about his own failures, making him a compassionate, credible narrator for these stories.

Liao came to international attention thanks to a series of remarkable portraits of China’s underclass, which he brought to life in numerous profiles and books. His methodology is that of a gumshoe private eye: he walks, listens, and observes. Himself a participant in the protests, he spent four years in jail and then fifteen years interviewing grassroots China. He went to people in remote mountains or under secret-police surveillance. His work often landed him in trouble and often under house arrest. It cost him two marriages and the loss of contact with his first child. But he has remained driven to write the stories that official history books in China try to censor out of existence.

Most of what you hold in your hands wouldn’t have come to light if not for Liao’s personal courage. Facing daily police harassment and a ban on travel abroad, Liao decided in 2011 to flee China for the West. After careful planning, he packed a backpack full of tapes, notes, and photos. He traveled to the Vietnamese border and found a place to walk across to freedom. He soon flew off to Germany, where he lives today with his new family, and a new existence in Berlin.

Since then he has been mining his notebooks and now has written what I believe to be his most significant work. A predictable oral history of 1989 would include many of the student leaders of this movement, but Liao focuses instead on more telling and interesting examples. These are the people who couldn’t flee abroad or didn’t have the fortune of serving a few years and being released in the 1990s as part of deals to reestablish economic ties with Western countries. For the people in this book there were no fellowships at Ivy League schools, no book deals, no rebirth as a religious celebrity—not even the ignominy of boring but comfortable lives in banking or academia.

Instead, these are the stories of the “Tiananmen thugs,” the completely inaccurate name given by the government to the citizens who bore the brunt of the military’s assault on the square and the transformation of nearby streets into killing fields. We often think of Tiananmen as a student revolt and its repression as falling on these young people, but in fact only the first part of this statement is accurate. The protests were led by students, but the people who defended them were ordinary Beijingers. These were the people who were gunned down, arrested en masse, tortured, jailed, and forced to labor in the country’s infamous laogai gulag.

Liao gives us so many moving stories: three young men who defaced the iconic portrait of Chairman Mao that looks down on Tiananmen Square; a worker who was so incensed by the massacre that he set fire to an armored personnel carrier; a bus conductor so angry that he threw bricks at soldiers. In these pages we hear about parents of the victims, and of course we get to know our guide and interviewer, Liao Yiwu, a poet who had the quixotic idea of filming a musical in his native Sichuan Province to protest June Fourth.

These are among the hundreds of thousands of mostly nameless people arrested in 1989, a fact that challenges claims that the pro-democracy protests were something that only concerned students, intellectuals, and other elites. Instead, we meet people from all walks of life who joined in the struggle out of sincere patriotism and paid for it in varied ways: destroyed marriages, lost careers, or a lifetime of sexual dysfunction brought on by torture.

Thus, this book does more than keep alive the memory of June Fourth; it helps us rethink those days by focusing on the forgotten people who sacrificed the most. Through them we get a radically new view of Tiananmen, one that increases its importance by showing its broad and terrible scope.

But while these stories are depressing, they are also hopeful. Whenever pundits argue that China has created the perfect dictatorship or that the past is forgotten, think of these people. Many were teenagers when their lives changed. Now it is only thirty years later. They are just middle-aged. Many will live another thirty years. Their lives will continue to vex the Communist Party for most of the twenty-first century.

These profiles also show the universality of humans’ desire for decency and fairness and the right to shape their future. When it is argued that events in faraway lands or distant eras are not our concern, think of these people. They had little to gain. And yet they acted—an inspiration for all of us in today’s uncertain times. 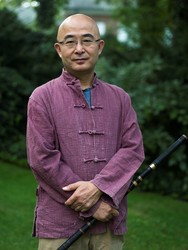 Liao Yiwu is a writer, musician, and poet from Sichaun, China. He is the author of The Corpse Walker, God Is Red, and For a Song and a Hundred Songs, a memoir of the four years he spent in prison after the Tiananmen Square Massacre. His work has been published in Germany, France, Italy, Spain, Poland, the Netherlands, the Czech Republic, and Sweden. He has received numerous awards, including the prestigious 2012 Peace Prize awarded by the German Book Trade and the Disturbing the Peace Award given by the Václav Havel Library Foundation. Liao escaped from China in July 2011 and currently lives in Berlin, Germany.

“Moving… a memorable series of portraits of the working-class people who defended Tiananmen Square."

“Liao Yiwu’s searing account of what happened in Beijing on June 4, 1989, and its lasting impact, doggedly collected from witnesses, demands attention.”

“This captivating work is essential for readers interested in China’s recent history.”

Real-Life Stories of China After the Tiananmen Square Massacre