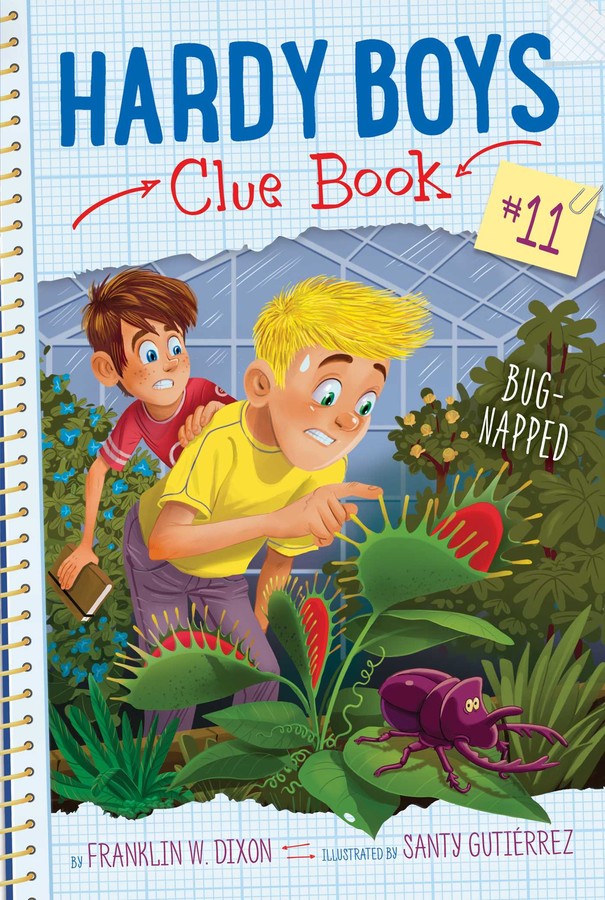 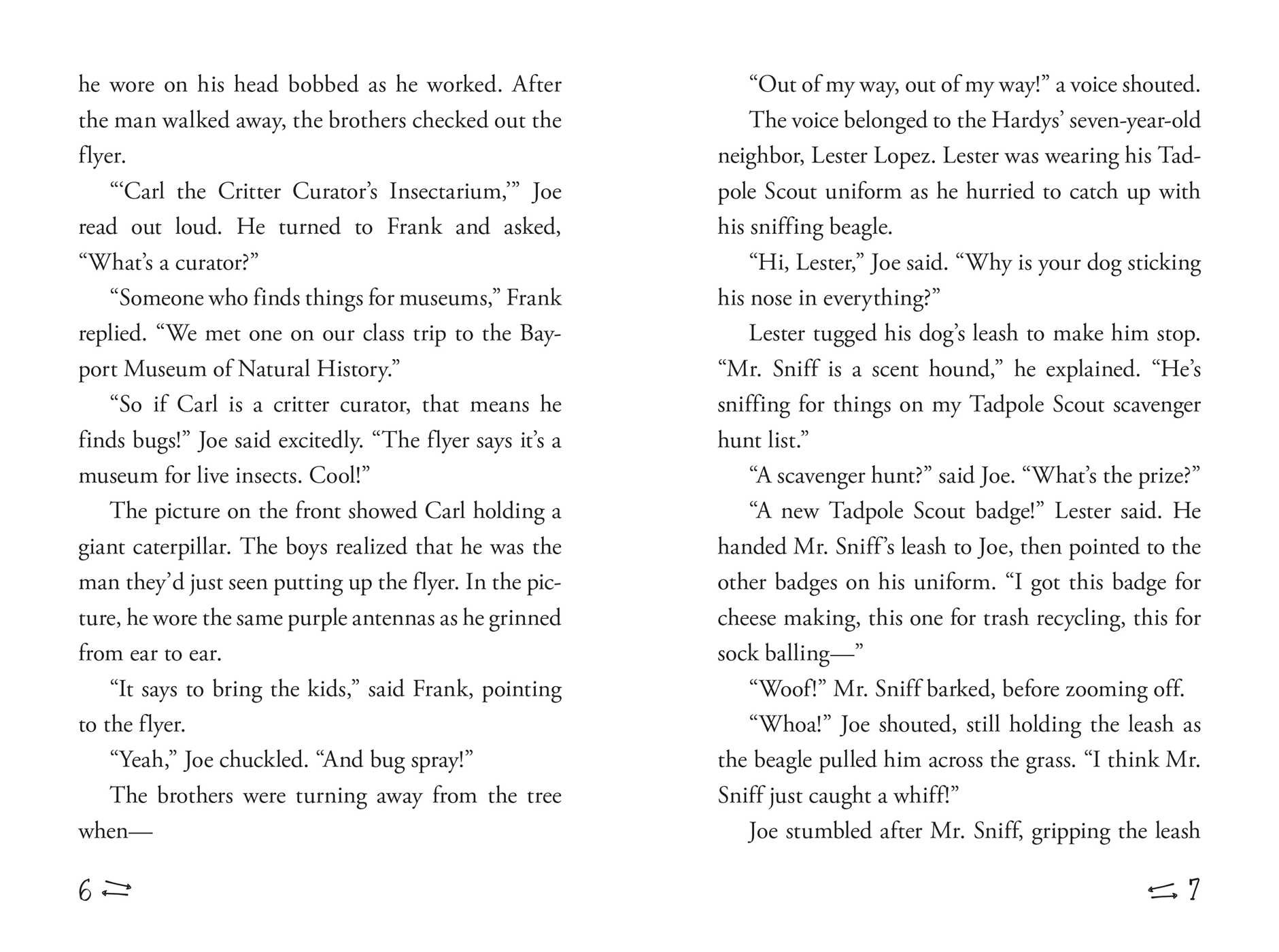 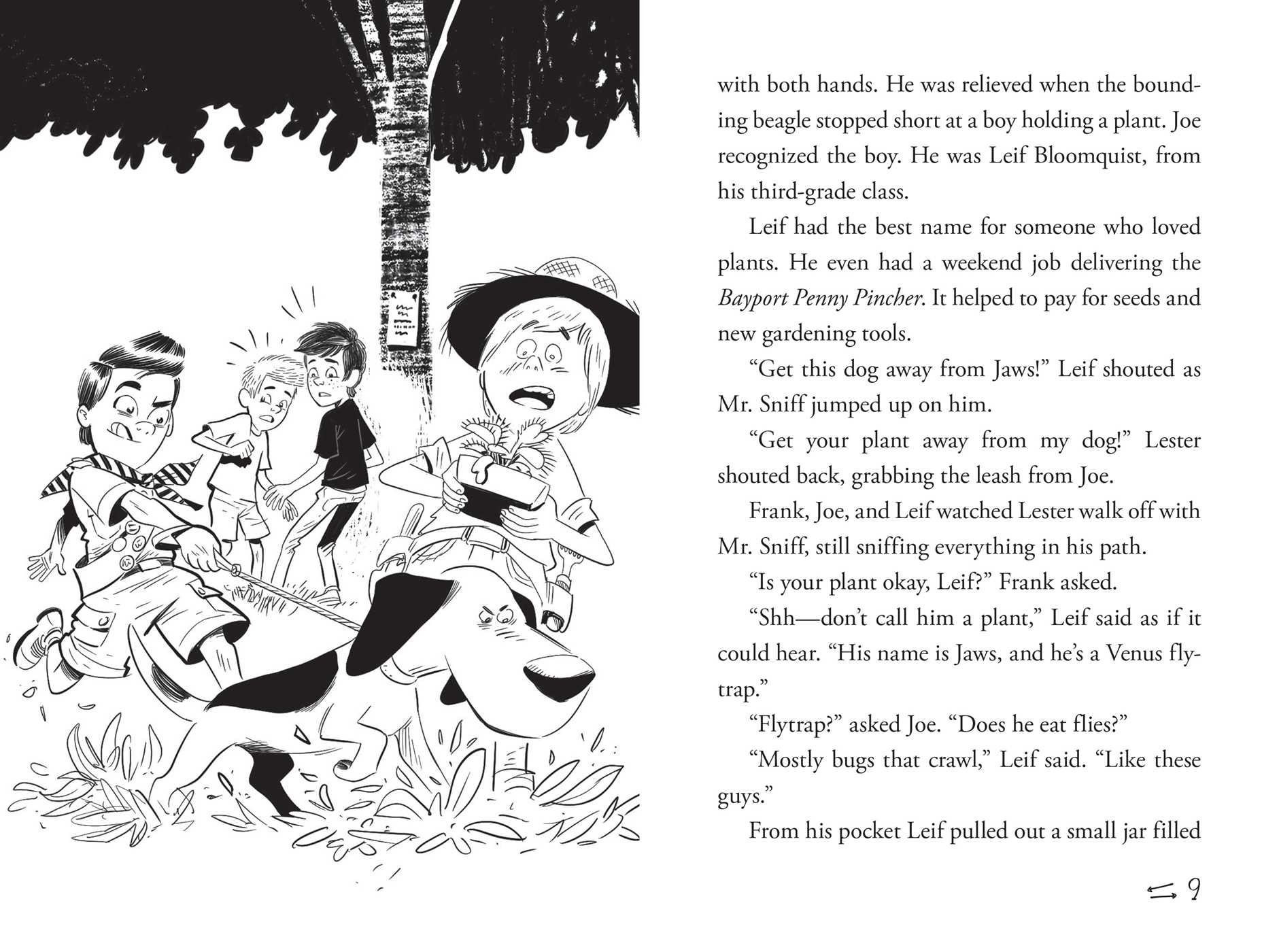 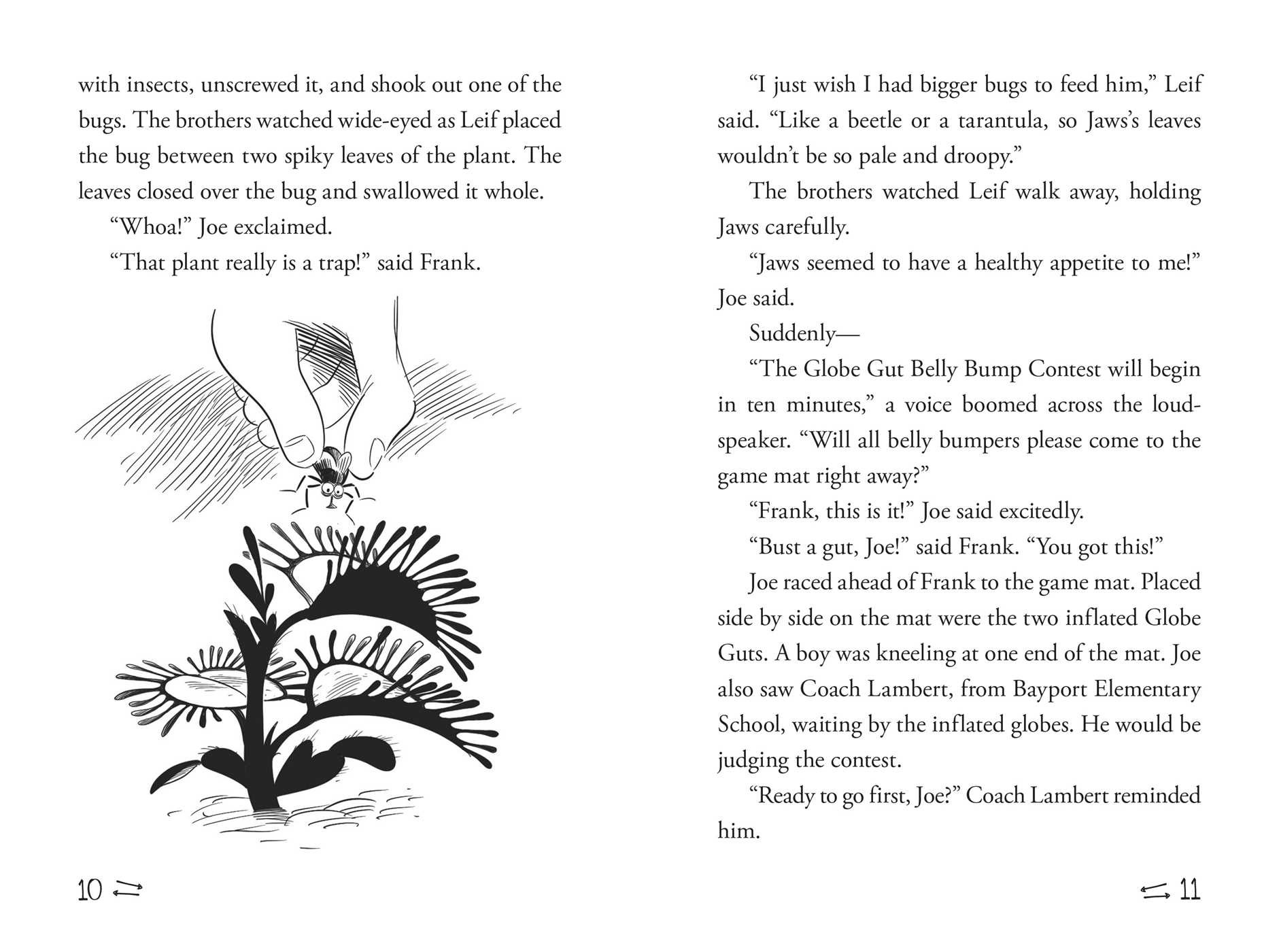 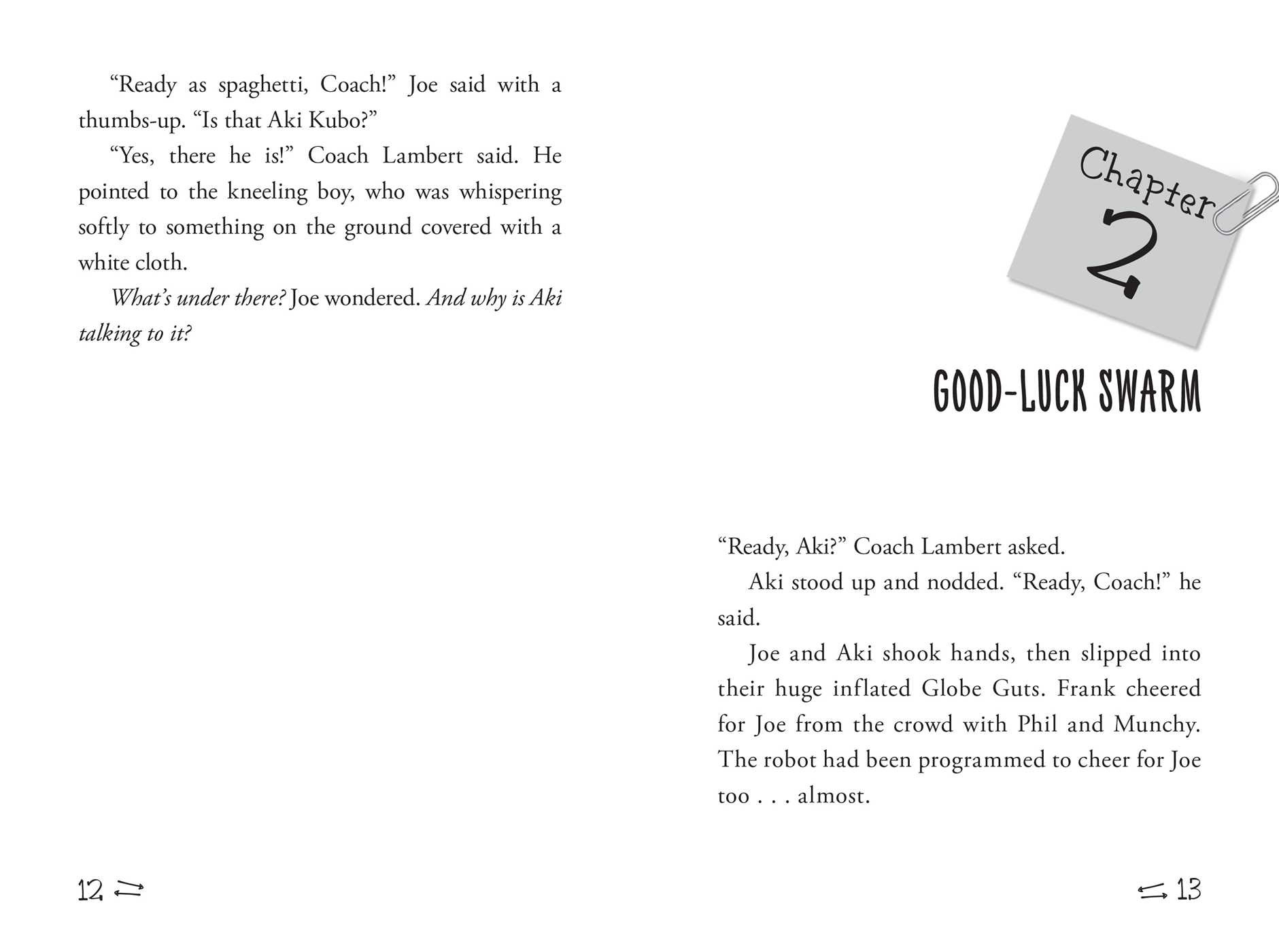 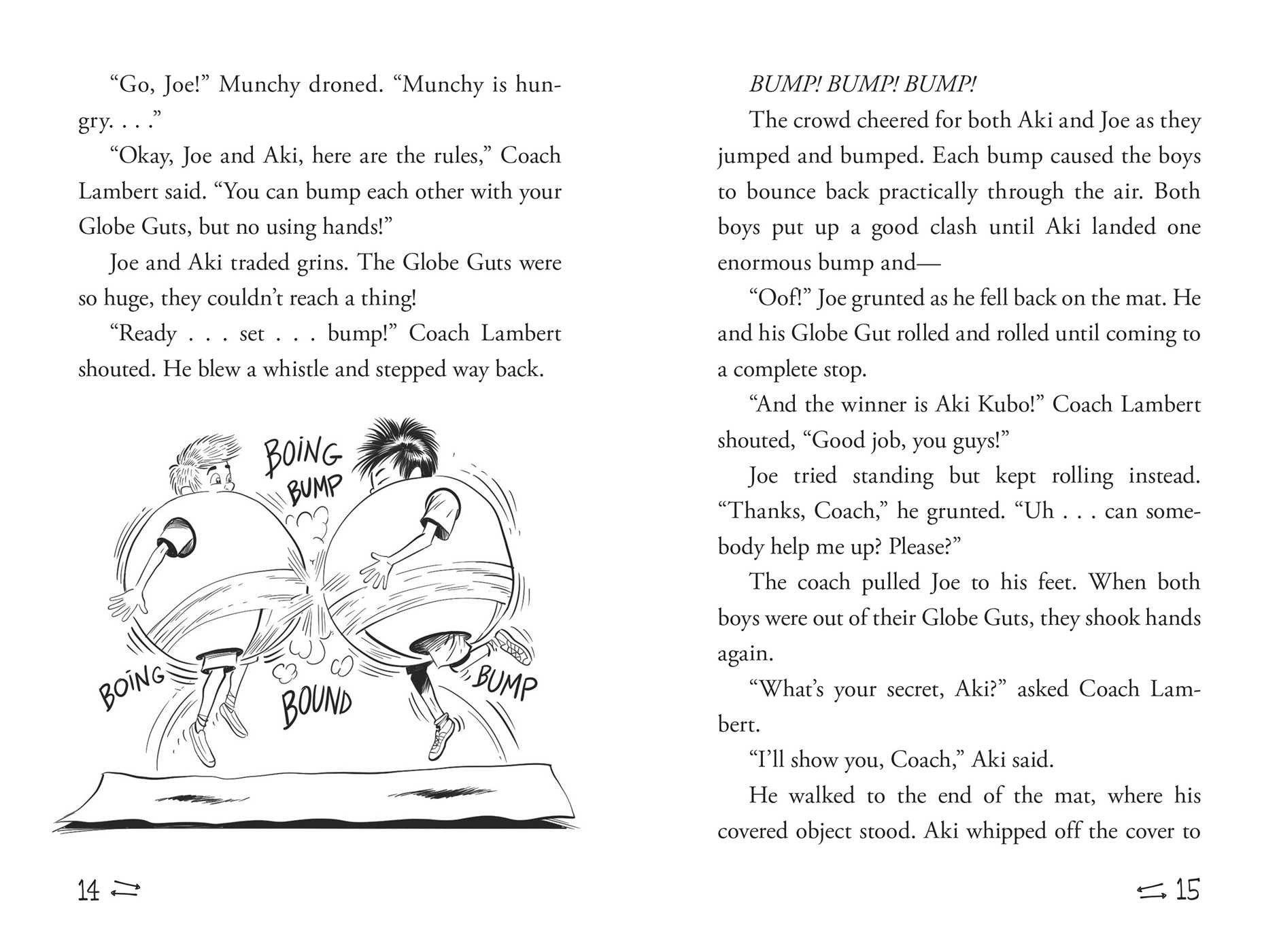 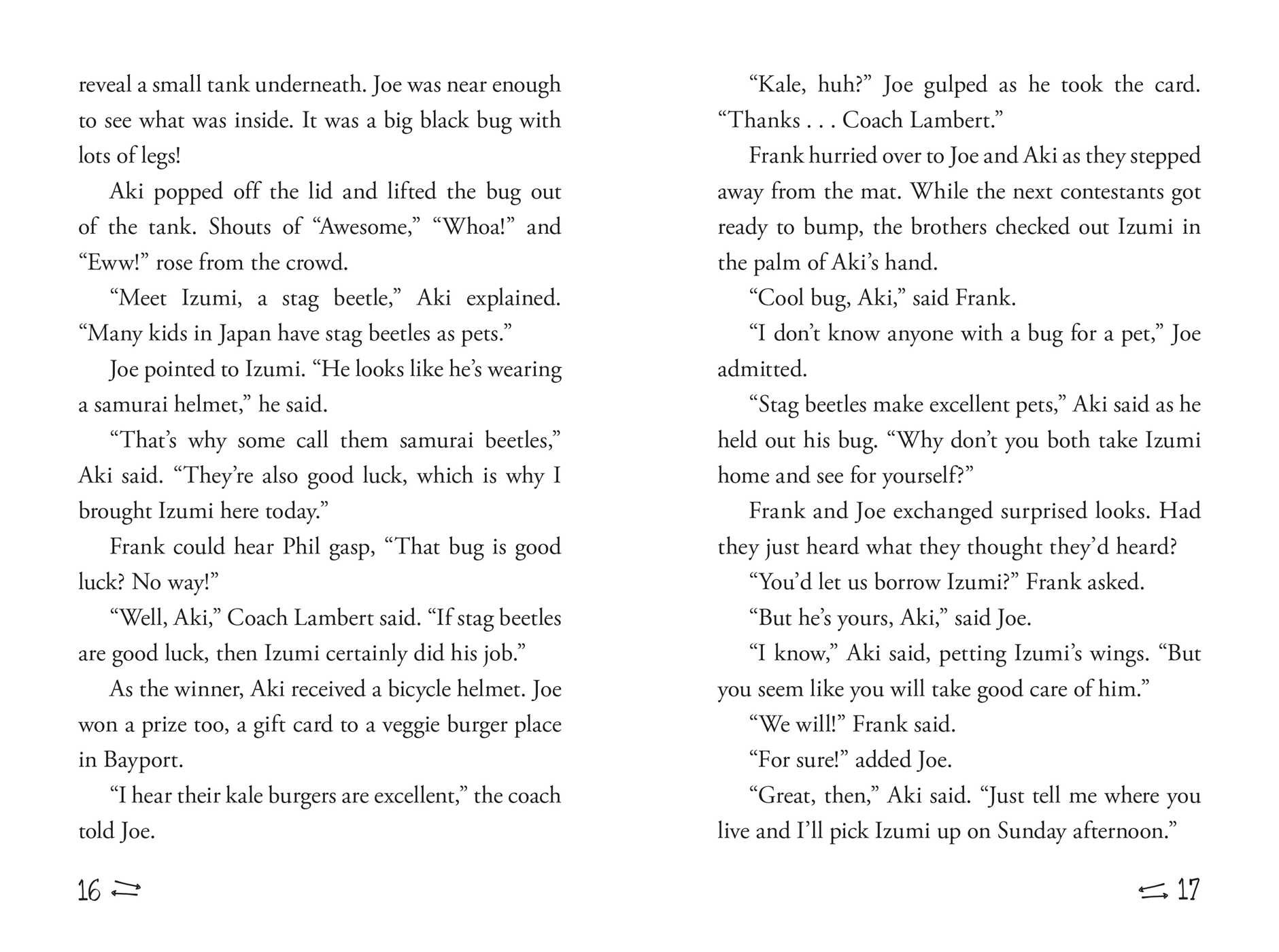 Detective brothers Frank and Joe search for a very special beetle in the eleventh book in the interactive Hardy Boys Clue Book series.

Frank and Joe are taking care of their friend’s super cool pet stag beetle named Izumi for the weekend. Not only is this bug fun to watch, but he is also supposed to bring you luck!

The first night with Izumi, Joe learns that stag beetles like to hiss and chirp…a lot. So, Joe decides to leave Izumi on the front stoop so he can get some sleep. But when Joe goes to get Izumi the next morning, he discovers that his lucky friend isn’t so lucky after all. Because Izumi has gone missing! Izumi’s cage is gone so the boys know he didn’t escape on his own. Did Aki’s pet get bug-napped?

Can the brothers find this special bug before the weekend is over? It’s up to Frank and Joe—and you—to solve the mystery of the missing beetle!

Chapter 1: Earth to Hardys EARTH TO HARDYS
“Remind me why there’s kale on my pizza, Frank,” eight-year-old Joe Hardy said, holding a slice topped with the leafy veggie, “and not pepperoni or meatballs?”

“Because it’s an Earth Day Festival in the park, Joe,” nine-year-old Frank Hardy reminded his brother. “Everything on the scene is green.”

“That’s for sure.” Joe sighed, staring at the grassy-looking slice.

“Besides,” said Frank, “eating healthy is a good idea before the Globe Gut Belly Bump.”

Joe smiled at the mention of the contest he would compete in soon. He couldn’t wait to wear a giant inflated globe around his middle and bump his challenger until one of them dropped to the mat. As if that wasn’t cool enough, Joe and his fellow bump contestant were signed up to go first!

“Coach Lambert told me his name is Aki Kubo,” Joe said. “Aki moved here with his parents from Japan. That’s practically the other side of the world!”

Joe was about to try a bite of his pizza when he felt something tug at his slice. Turning, he saw his pizza halfway inside the mouth of a robot!

He and Frank tried to pull the pizza slice from the sucking jaws of the capsule-shaped machine, but it was no use.

The brothers turned to see their friend Phil Cohen racing over. Phil flipped a switch on the robot, stopping his chomping at once.

“Thanks, Phil,” Joe said, although his pizza slice was a goner.

“Is Munchy one of your inventions, Phil?” asked Frank.

Phil nodded proudly. Everyone knew he was the best inventor at Bayport Elementary School. “You bet,” he said. “I invented Munchy for the Earth Day Junior Inventors Challenge tomorrow.”

“Munchy chews up leftover scraps and turns them into compost,” Phil explained. “Compost is great for the soil.”

“So that’s where my pizza slice is going,” Joe sighed. “In the dirt!”

“Sorry, Joe,” Phil said. “I have to reprogram Munchy to eat only scraps.”

“Or maybe just the kale topping on a pizza,” Joe joked.

Phil gazed at his robot. “I have to win tomorrow, you guys,” he said. “First prize is a whole summer at a camp for kid inventors. I’d do anything to go to Camp Galileo. Anything!”

“You should see the inventions I’m up against!” Phil groaned. “A straw that turns swamp water into fresh water! A scooter made from recycled plastic bottles! There’ll even be a fake leather jacket made out of chewed-up bubble-gum wads.”

He flipped another switch on his robot. Then he walked away, with Munchy following behind him. The tip of Joe’s pizza slice was sticking out of the robot’s mouth.

“Munchy may have eaten my pizza, Frank,” Joe said. “But at least he didn’t eat something way more important.”

“Our clue book!” said Joe with a grin.

“You brought our clue book here?” Frank asked. “To an Earth Day celebration?”

Joe patted his jacket pocket. “I bring our clue book everywhere!” he declared.

That was because Frank and Joe loved solving mysteries. Their clue book was where they wrote all their clues, suspects, and most important, the five questions good detectives ask themselves: who, what, where, when, and why?

“You won’t need our clue book during the Globe Gut Belly Bump Contest,” Frank said. “Let’s see what else is going on around here before the contest starts.”

The brothers walked through the festival, seeing lots of Earth Day activities. There was a crafts table where kids made bugs and flowers out of wire. One booth sold organic cupcakes, while another handed out free samples of bright green smoothies. Joe was pretty sure they had kale in them!

As they walked on, Frank and Joe spotted a man pinning a flyer to a tree. The buggy antennas he wore on his head bobbed as he worked. After the man walked away, the brothers checked out the flyer.

“?‘Carl the Critter Curator’s Insectarium,’?” Joe read out loud. He turned to Frank and asked, “What’s a curator?”

“Someone who finds things for museums,” Frank replied. “We met one on our class trip to the Bayport Museum of Natural History.”

“So if Carl is a critter curator, that means he finds bugs!” Joe said excitedly. “The flyer says it’s a museum for live insects. Cool!”

The picture on the front showed Carl holding a giant caterpillar. The boys realized that he was the man they’d just seen putting up the flyer. In the picture, he wore the same purple antennas as he grinned from ear to ear.

“It says to bring the kids,” said Frank, pointing to the flyer.

The brothers were turning away from the tree when—

The voice belonged to the Hardys’ seven-year-old neighbor, Lester Lopez. Lester was wearing his Tadpole Scout uniform as he hurried to catch up with his sniffing beagle.

“Hi, Lester,” Joe said. “Why is your dog sticking his nose in everything?”

Lester tugged his dog’s leash to make him stop. “Mr. Sniff is a scent hound,” he explained. “He’s sniffing for things on my Tadpole Scout scavenger hunt list.”

“A new Tadpole Scout badge!” Lester said. He handed Mr. Sniff’s leash to Joe, then pointed to the other badges on his uniform. “I got this badge for cheese making, this one for trash recycling, this for sock balling—”

“Whoa!” Joe shouted, still holding the leash as the beagle pulled him across the grass. “I think Mr. Sniff just caught a whiff!”

Joe stumbled after Mr. Sniff, gripping the leash with both hands. He was relieved when the bounding beagle stopped short at a boy holding a plant. Joe recognized the boy. He was Leif Bloomquist, from his third-grade class.

Santy Gutierrez resides in the seaside city of La Coruña, Spain. He has won acclaim as the Best Spanish Young Editorial Cartoonist and Best Galician Caricaturist, among others.