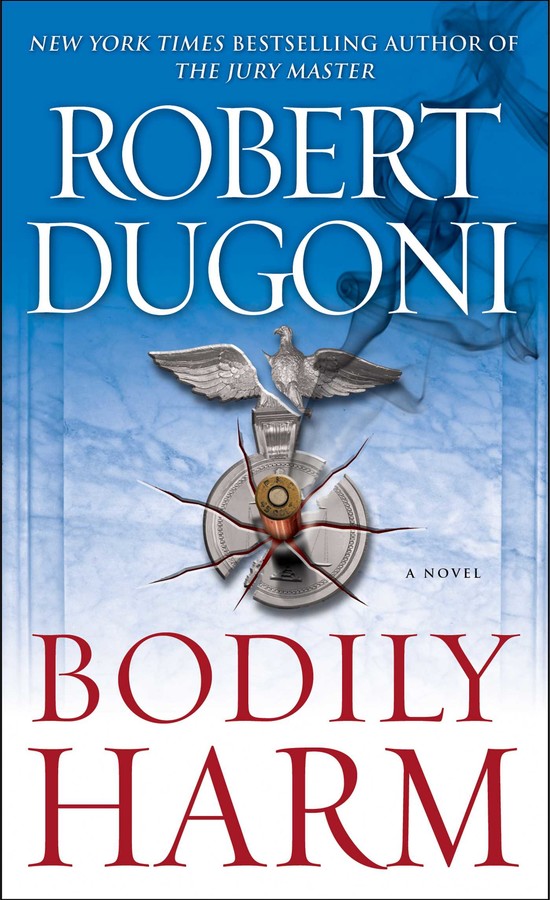 New York Times bestselling author Robert Dugoni returns with his most exhilarating legal thriller to date, a pulse-pounding story of corporate greed, espionage, and the lengths one man is willing to go for justice.

Bodily Harm opens with a big win for David Sloane and his new partner, Tom Pendergrass, in a malpractice case centered on the death of a young child. But on the heels of this seeming victory, an unlikely character—toy designer Kyle Horgan— comes forward to tell Sloane that he’s gotten it all wrong: Horgan’s the one who’s truly responsible for the little boy’s death and possibly others—not the pediatrician Sloane has just proven guilty.

Ordinarily, Sloane might have dismissed such a person as a crackpot, but something about this case has always troubled him—something that he couldn’t quite pinpoint. When Sloane tries to follow up with Horgan, he finds the man’s apartment a shambles— ransacked by unknown perpetrators. Horgan has vanished without a trace. Together with his longtime investigative partner Charles Jenkins, Sloane reexamines his clients’ son’s death and digs deeper into Horgan’s claims, forcing him to enter the billion-dollar, cutthroat toy industry. As Sloane gets closer to the truth, he trips a wire that leads to a shocking chain of events that nearly destroys him.

To get to the bottom of it all and find justice for the families harmed, Sloane must keep in check his overwhelming desire for revenge. Full of nail-bitingly tense action scenes as well as edge-of-your-seat courtroom drama, Bodily Harm finds Robert Dugoni at the very top of his game.

This reading group guide for Bodily Harm includes an introduction, discussion questions, and ideas for enhancing your book club. The suggested questions are intended to help your reading group find new and interesting angles and topics for your discussion. We hope that these ideas will enrich your conversation and increase your enjoyment of the book.

Celebrated trial lawyer David Sloane is at the top of his game after a victory proving a local doctor was negligent in a child’s death. But just as Sloane is settling down with his growing family, another child’s death grabs his attention. It becomes clear the two deaths are connected and that a local toy company could be involved. Soon Sloane is on the case, even after it puts his life—and the lives of those he loves most—in danger.

1. What was your initial reaction to Kyle Horgan? Does he seem like someone who could be believed when he first approached Sloane? What kind of person does Horgan prove to be?

2. Sloane is called “the lawyer who does not lose.” Do you think this affects how he handles the Kendall case?

3. Malcolm Fitzgerald, the new CEO of Kendall Toys, is torn between selling the company to Galaxy Toys or taking a gamble with the new secret toy. Does he make the right decision? If you were in his position, what would you have done?

4. Though Kendall Toys rejects Galaxy’s buyout offer, who do you think the sale would have helped and who would it have hurt?

5. Were you impressed by Metamorphis, Kendall’s secret toy? Do you think it would have become the hot toy Kendall hoped it would?

6. Describe the situation Albert Payne is in at the outset of the story. If you were being blackmailed as he was, would you cover up criminal acts to protect yourself or go straight to the police?

7. Who did you initially think was behind Albert Payne’s decision to shut down Anne LeRoy’s research? Do the events of the story confirm or change your idea?

8. Kendall Toys’ employee Manny Gallegos originally accepted a settlement rather than having his family deported. How does Sloane use this information to his advantage? Does it work?

9. Does Sloane’s being an orphan affect how he handled the case? If so, how?

10. As a lawyer, Sloane is perceptive and a quick thinker, always trying to stay one step ahead. Give an example of how this helped him stay alive and solve the crime.

11. Sloane’s friend Tom Molia refers to a Bruce Springsteen song with a metaphor about a dog being beaten and spending its life covering up, but then Tom says others “get tired of getting beat and one day just bite back.” How does this relate to the events in this book?

12. Did think the corporate antagonists got what they deserved? If not, what do you think should have happened to Sebastian Kendall, Fitzgerald, and Bolelli?

13. Is Sloane’s decision to let Jake go with his biological father a selfless act? Why does he make this decision?

14. Where do you see Sloane going from here?

1. The story is all about toys. Have your book group talk about their favorite toys. What kinds of toys are popular now? How have fads changed over the years?

2. Imagine the new types of toys you’d love to see on the market. Mock up designs if you can.

3. The novel constantly reminds us to appreciate what we have, since it may not always be there. Discuss what you appreciate about your family and friends and why they are so important to you.

Robert Dugoni has practiced as a civil litigator in San Francisco and Seattle for seventeen years. In 1999 he left his law practice to write full time. He graduated Phi Beta Kappa from Stanford University with a degree in journalism and worked as a reporter for the Los Angeles Times before obtaining his doctorate of jurisprudence from the University of California at Los Angeles School of Law. A two-time winner of the Pacific Northwest Writers Association Literary Contest, he lives with his wife and two children in the Pacific Northwest.