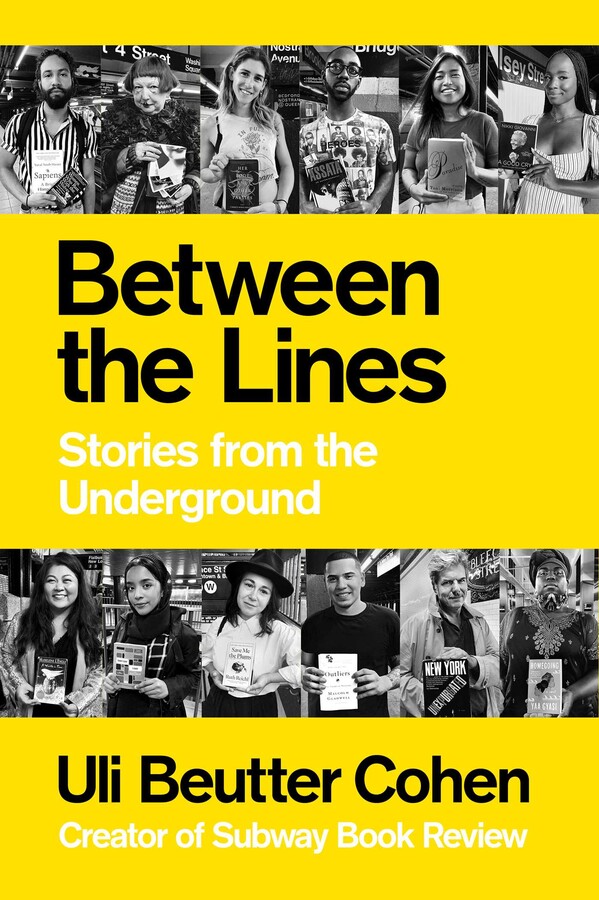 Stories from the Underground

A thrilling ride, as unexpected as New York City itself, Between the Lines gloriously takes to the underground and showcases in over 170 interviews what moves us forward—from the acclaimed creator of Subway Book Review.

For the better part of a decade, Uli Beutter Cohen rode the subway through New York City’s underbelly to observe society through the lens of our most creative and critical thinkers: the readers of books. Between the Lines offers an intimate look into the minds of the inhabitants of one of the most fabled cities in the world. It is a moving reflection of who we are and where we are going during a defining time.

What started as an experiment on the B train grew into a movement that “forges connection” (Esquire), is “wildly popular” (Literary Hub), “refreshing” (The Cut) and the thing that “has changed how we look at books” (Forbes). Inspired by Subway Book Review (@SubwayBookReview), Between the Lines is Beutter Cohen’s highly anticipated first book and features over 170 interviews, complete with her original photography, and countless intriguing book recommendations. Beutter Cohen offers nuanced insights into the American psyche and gives us an invaluable document of our challenges and our potential.

Meet Yahdon, who reads Dapper Dan: Made in Harlem and talks about the power of symbols in fashion. Diana shares how Orlando shaped her journey as a trans woman. Saima reads They Say, I Say and reflects on the power of her hijab. Owen reads Assata and talks about the liberation he finds in dance. In Between the Lines we are entrusted with secrets, offered new perspectives, and given brilliant insights into the reading habits of everyday and notable New Yorkers such as photographer Jamel Shabazz, filmmaker Katja Blichfeld, painter Devon Rodriguez, comedian Aparna Nancherla, fashion editor Lynn Yaeger, playwright Jeremy O. Harris, fashion designer and RHONY star Leah McSweeney, chef Camille Becerra, designer Waris Ahluwalia, artist Debbie Millman, activist Amani al-Khatahtbeh, authors such as Jia Tolentino, Roxane Gay, Ashley C. Ford, Eileen Myles, Min Jin Lee, and many more.

Between the Lines is an enthusiastic celebration of the ways books invite us into each other’s lives and is a call to action for imagining a bold, empathetic future together.

Uli Beutter Cohen is a New York City-based documentarian, artist, and the creator of Subway Book Review. She was born and raised in a small village in Germany and immigrated to the United States in 2001. Her work explores the meaning of belonging to a time and a place through film, writing, and photography, and uses books as a conversation starter with strangers. Beutter Cohen is the host of SBR Live, a talk show on Instagram, and a sought after speaker and panelist. Her work has been featured in print, on TV, the radio, and online by New York magazine; Esquire; Vogue; Forbes; O, The Oprah Magazine; Glamour; the BBC; and The Guardian among others. Between The Lines: Stories from the Underground is Uli Beutter Cohen’s first book. She lives in Brooklyn. Follow her @TheUBC and @SubwayBookReview.

Stories from the Underground