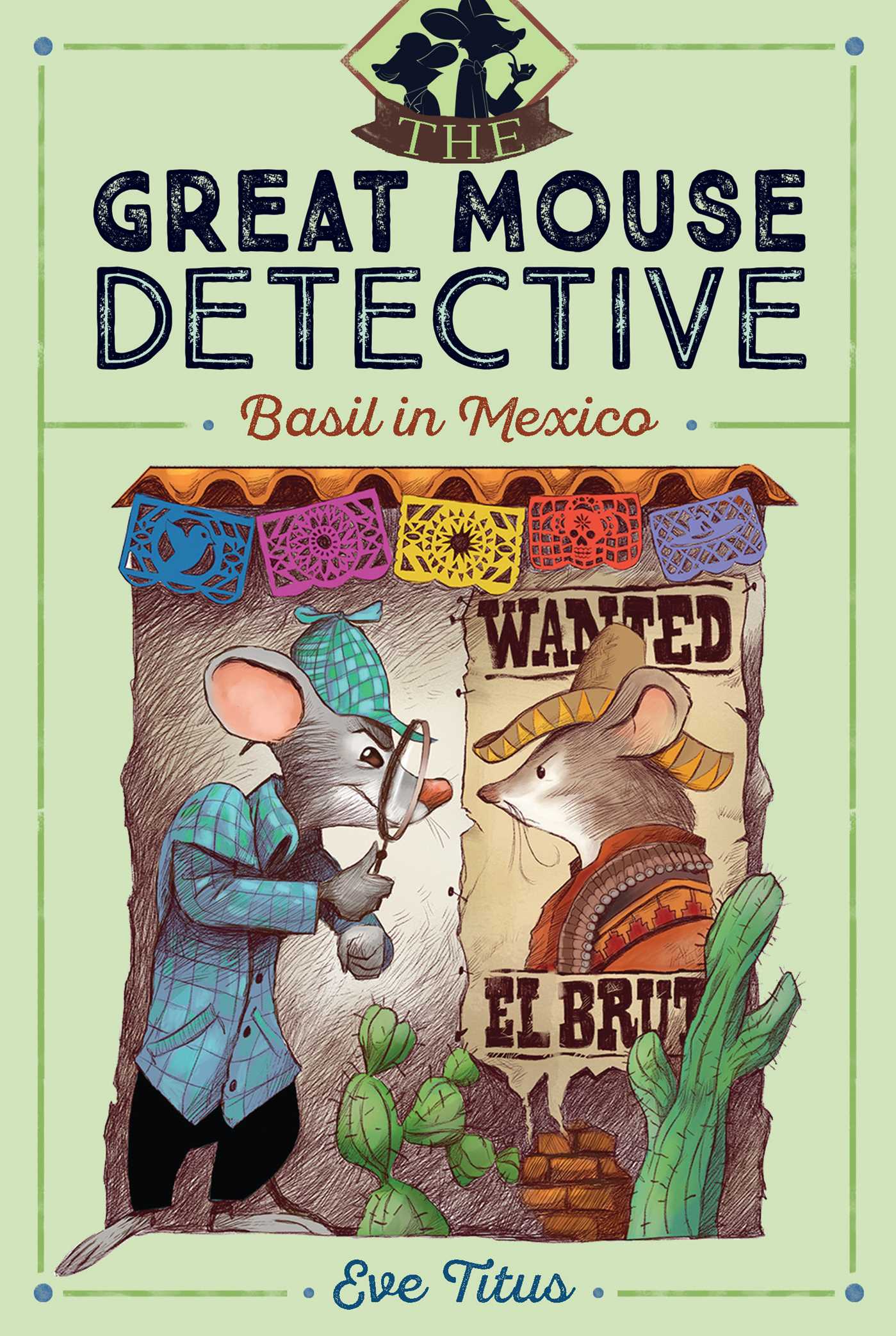 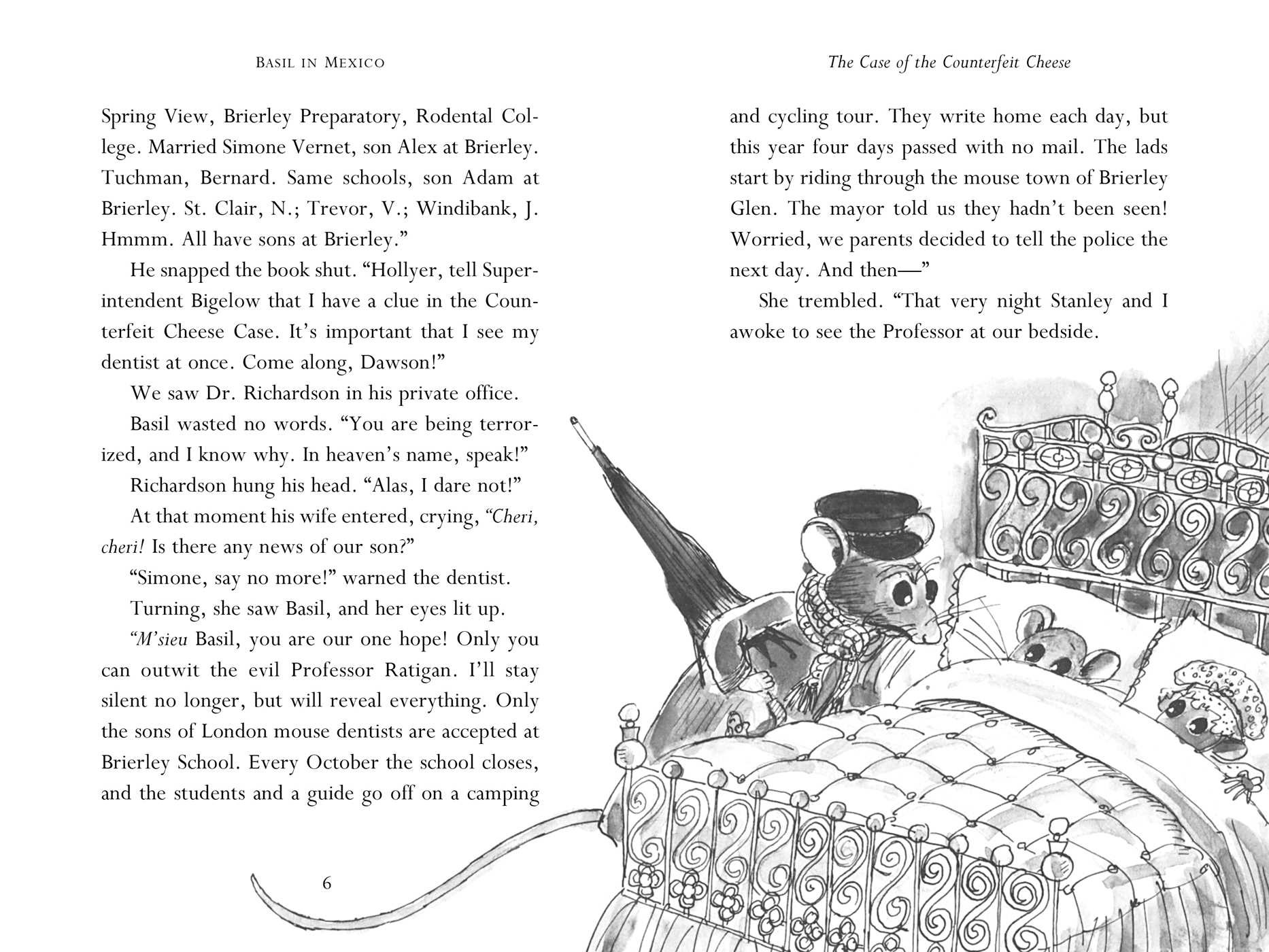 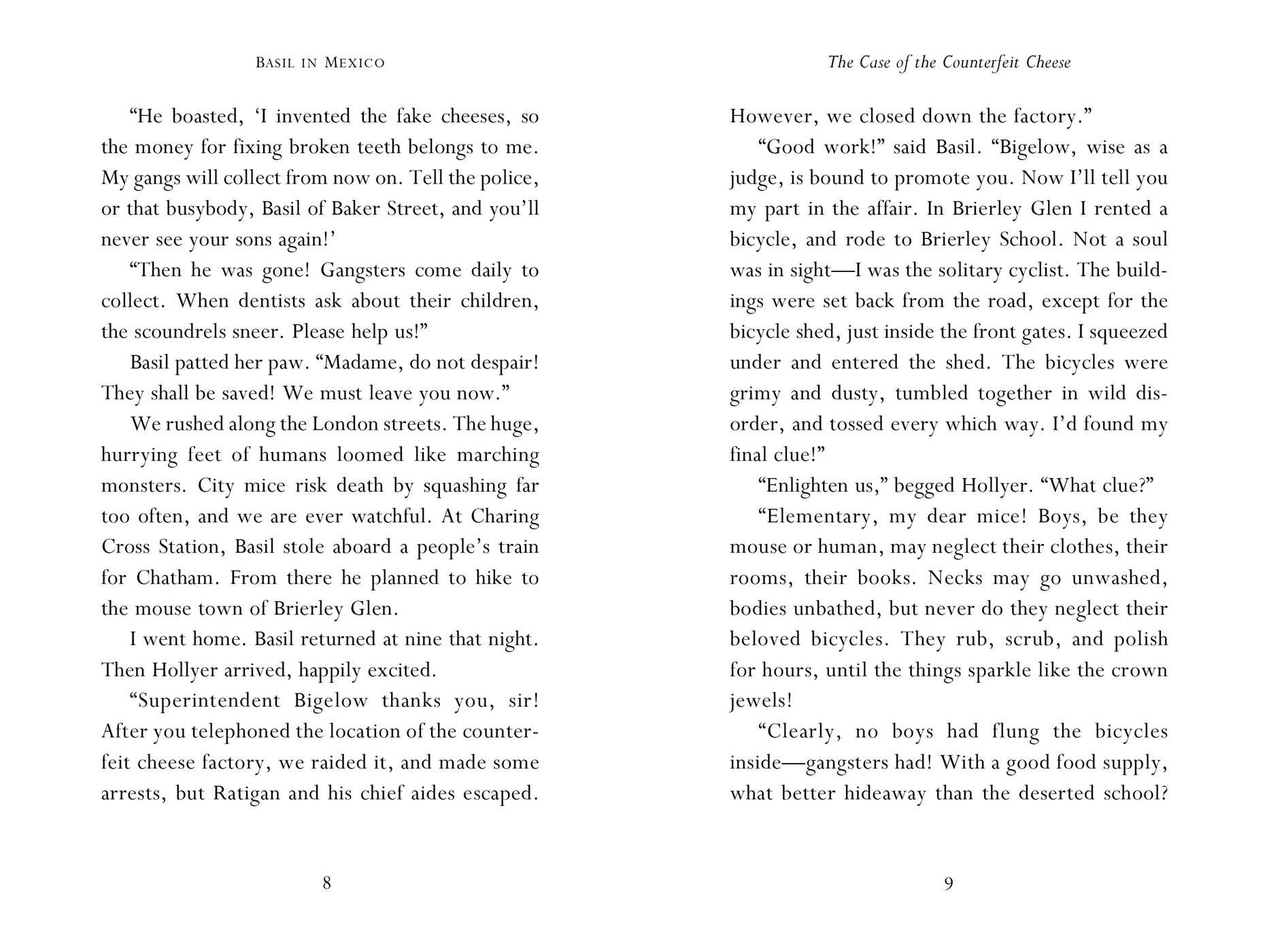 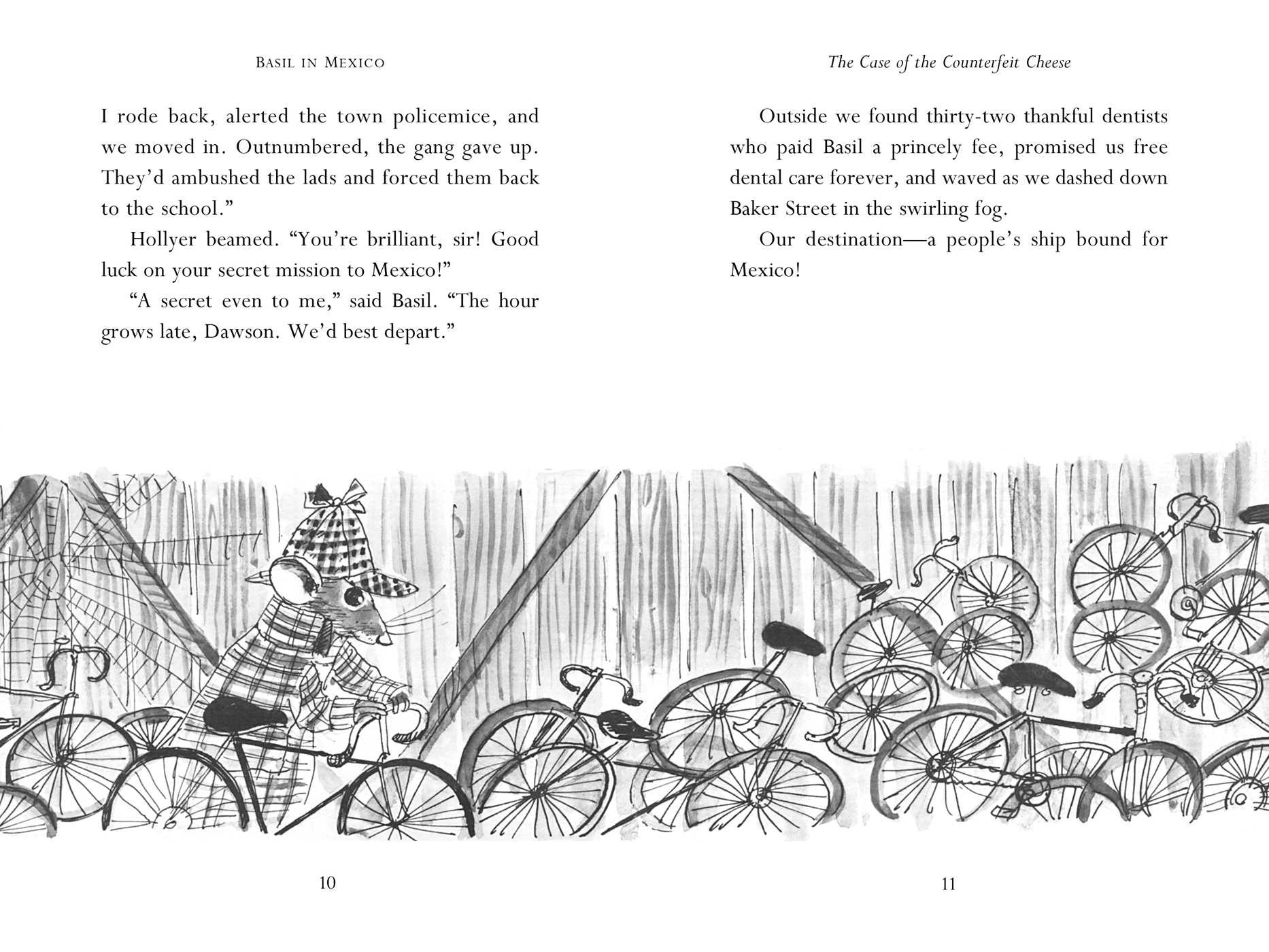 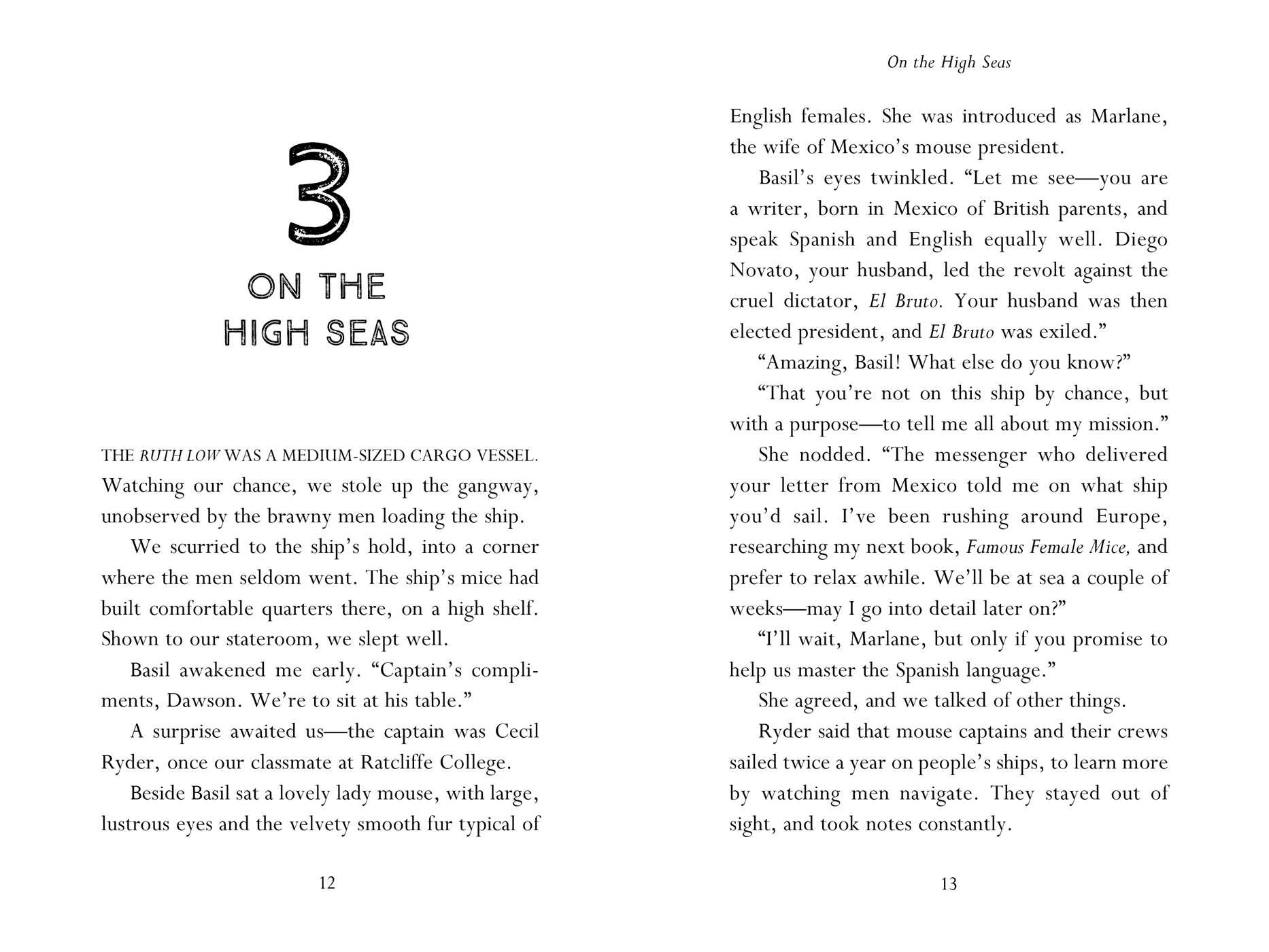 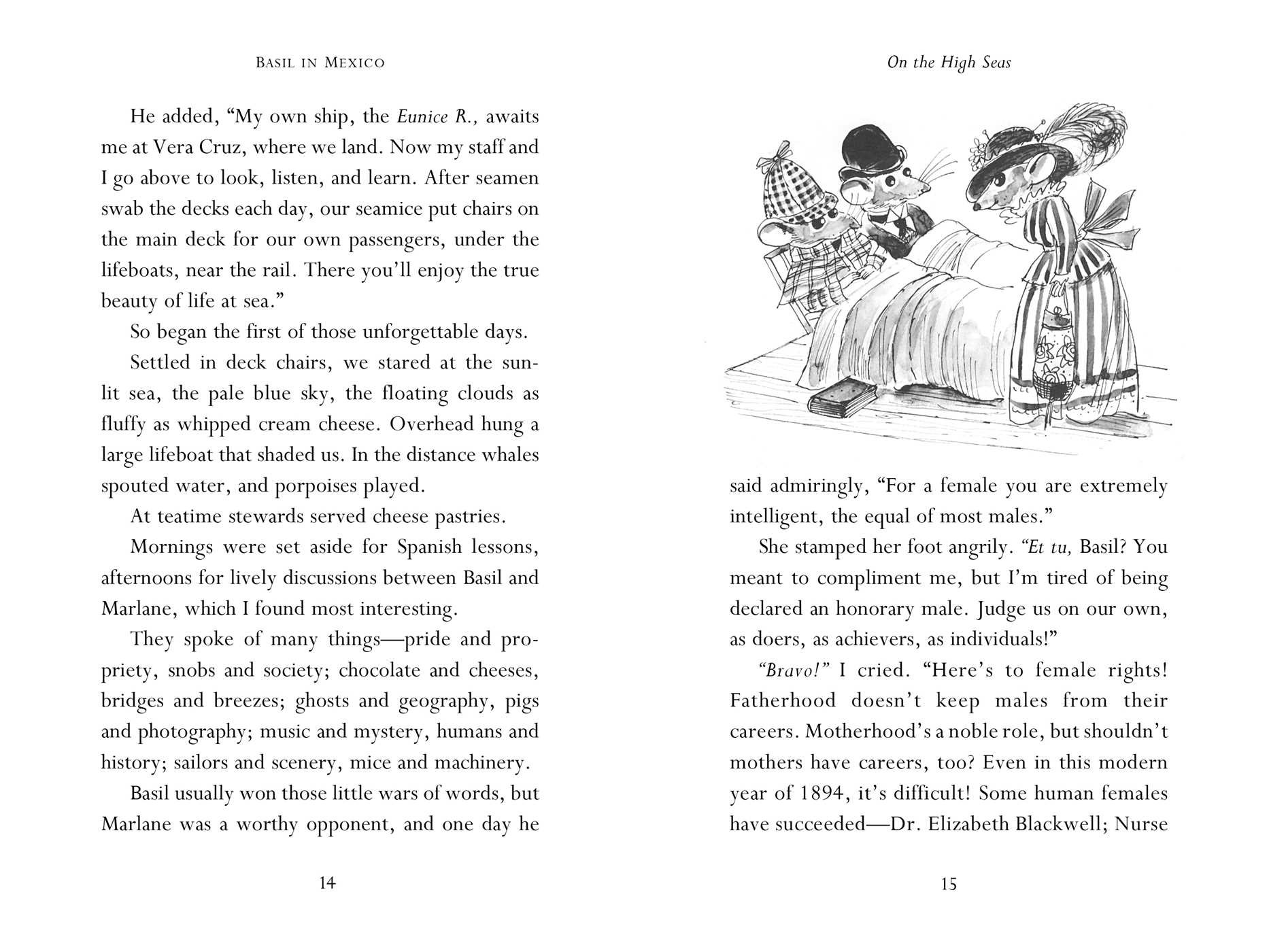 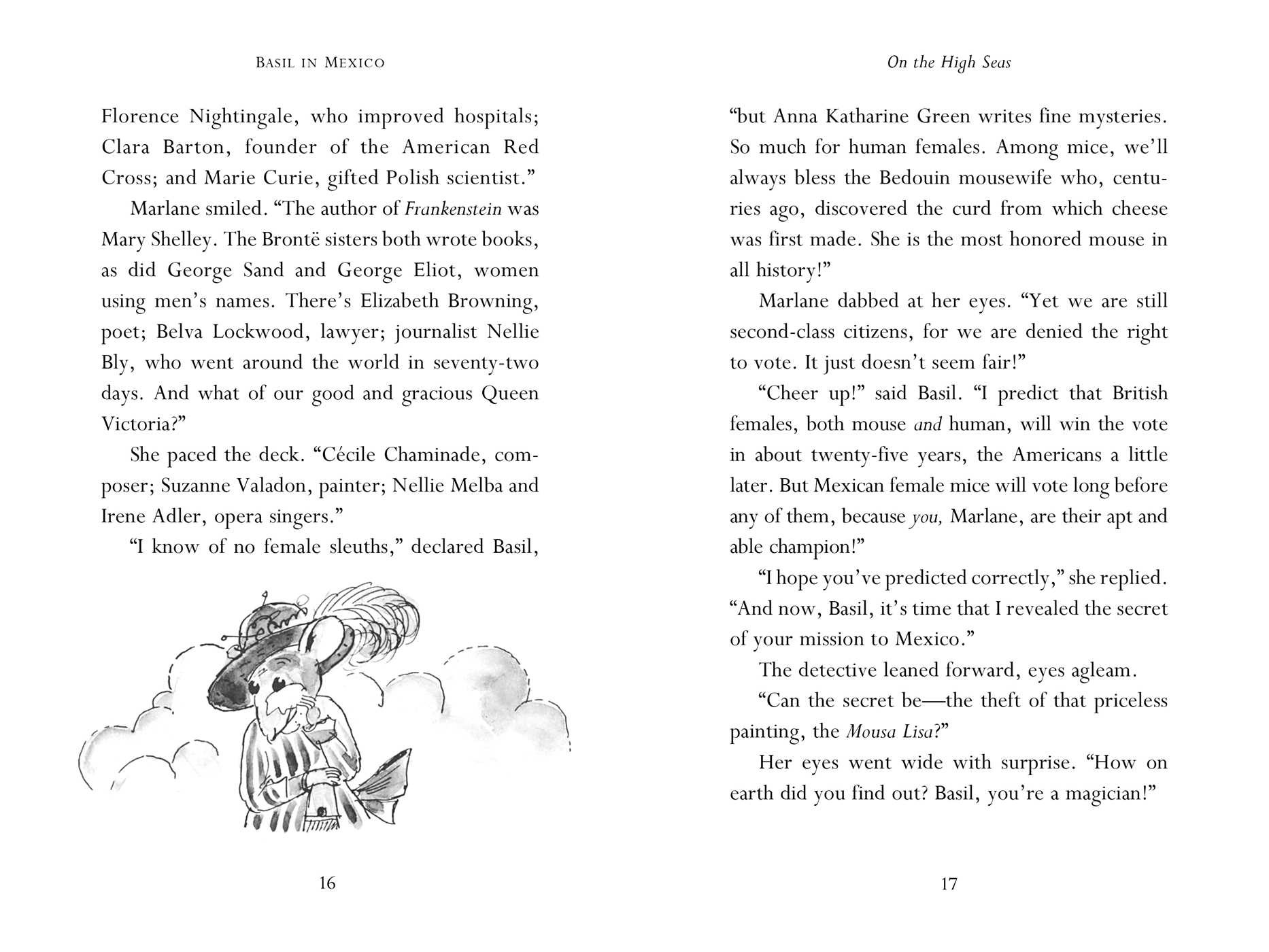 Book #3 of The Great Mouse Detective
By Eve Titus
Illustrated by Paul Galdone
LIST PRICE $16.99
PRICE MAY VARY BY RETAILER

Named one of “13 Detective Book Series You Obsessed over as a Kid” by Buzzfeed.com and the inspiration for a hit Disney film, the masterful Great Mouse Detective is back and travelling to Mexico to solve three thrilling mysteries!

Basil—the famous sleuth of mousedom—has learned a great deal living in Sherlock Holmes’s cellar. Now, his sleuthing skills are being put to the test on a wild trip to Mexico! First, mousedom becomes frantic as mice are cracking their teeth on phony cheese made of concrete. Can he find a way to stop whoever is making the counterfeit cheese? Then, he must ferret out the truth when a beloved masterpiece—the Mousa Lisa—goes missing. And finally, Basil must track down the culprit when Dr. Dawson, Basil’s faithful friend and companion, is mousenapped! In each of these daring adventures, Basil proves himself to be a true disciple of his hero, Sherlock Holmes!

Basil in Mexico 1 BASIL THE BRILLIANT
WHO HAS NOT HEARD OF Sherlock Holmes? men hail him as the master detective of all time.

Mice proudly hail their own super-sleuth, Basil of Baker Street. No case is too difficult or too dangerous for this daring detective, and criminals cringe at the sound of his name.

I am Dr. David Q. Dawson, and Basil and I lodge at Baker Street, number 221B, which is also the address of Mr. Sherlock Holmes and Dr. John H. Watson. The men dwell abovestairs and the mice belowstairs, in the cellar community of Holmestead, so named by Basil.

My friend learns his detective lore by listening at his hero’s feet when scientific sleuthing is discussed. He takes many notes in shortpaw, hidden behind a chair leg. You may ask—does Sherlock spy him? I think he does, and is charmed by his wee imitator in the deerstalker cap.

To give you an example of my friend’s genius, I shall describe how he solved a case in a few short hours, a case that had baffled Mouseland Yard detectives for weeks.

On a crisp October morning in the year 1894, Mrs. Judson served our breakfast. We were to sail at midnight on a secret mission to Mexico.

Basil had a second helping of cheese soufflé.

“My dear mousekeeper,” said he, “tomorrow we breakfast at sea. We’ll miss your excellent cooking, and your good self as well.”

“Sure, and I’ll be missing ye both. The Mexican mouse president himself wrote the letter sending for ye. ’Tis a great honor, Mr. Basil!”

Nodding, he scanned the Mouse Times.

“Dawson, the Case of the Counterfeit Cheese is still unsolved! Hundreds of mice with broken teeth crowd into dentists’ waiting rooms. The fake cheeses look and smell like real cheeses. Mice sniff them in dark passageways and gnaw away. Their reward? The ghastly sound of breaking teeth! There are no clues. Policemice remove the counterfeits, but others appear. Do you recall the Case of the Lost Colony, and the golden hill of cheese with a deadly mousetrap concealed inside?”

I shuddered. “But for your warning, I’d have perished! That evil device was invented by Professor Ratigan, leader of London’s mouse underworld. Is this another of his schemes? However, it seems to me that only dentists would profit. I saw my dentist last week. Dr. Tuchman’s office was jammed! I joked, told him he’d make millions, but he didn’t even smile, and his paws kept twitching and trembling.”

“Hmmm. Mrs. Judson, what of your dentist?”

“Mr. Basil, mine wasn’t happy about the crowds of patients, either. And, if you’ll excuse the expression, he was as nervous as a cat!”

My friend looked thoughtful. “My own dentist, Dr. Richardson, is the happy-go-lucky type, but yesterday he was as jumpy as a kangaroo. His paws shook so much that I feared he’d fill the wrong tooth! One nervous dentist might be a coincidence, but—three? Dawson, there must be a reason!”

There was a knock at the door. Mrs. Judson admitted Inspector Hollyer, of the Yard.

“Basil, we need your help! Superintendent Bigelow asks you to delay your departure and stay to solve the Case of the Counterfeit Cheese.”

“Postpone my mission to Mexico? Impossible! However, the case interests me. I’ll do my best to solve it by dark and still make that midnight sailing. Tell me all you know, Inspector.”
Eve Titus

Book #3 of The Great Mouse Detective
By Eve Titus
Illustrated by Paul Galdone
LIST PRICE $16.99
PRICE MAY VARY BY RETAILER