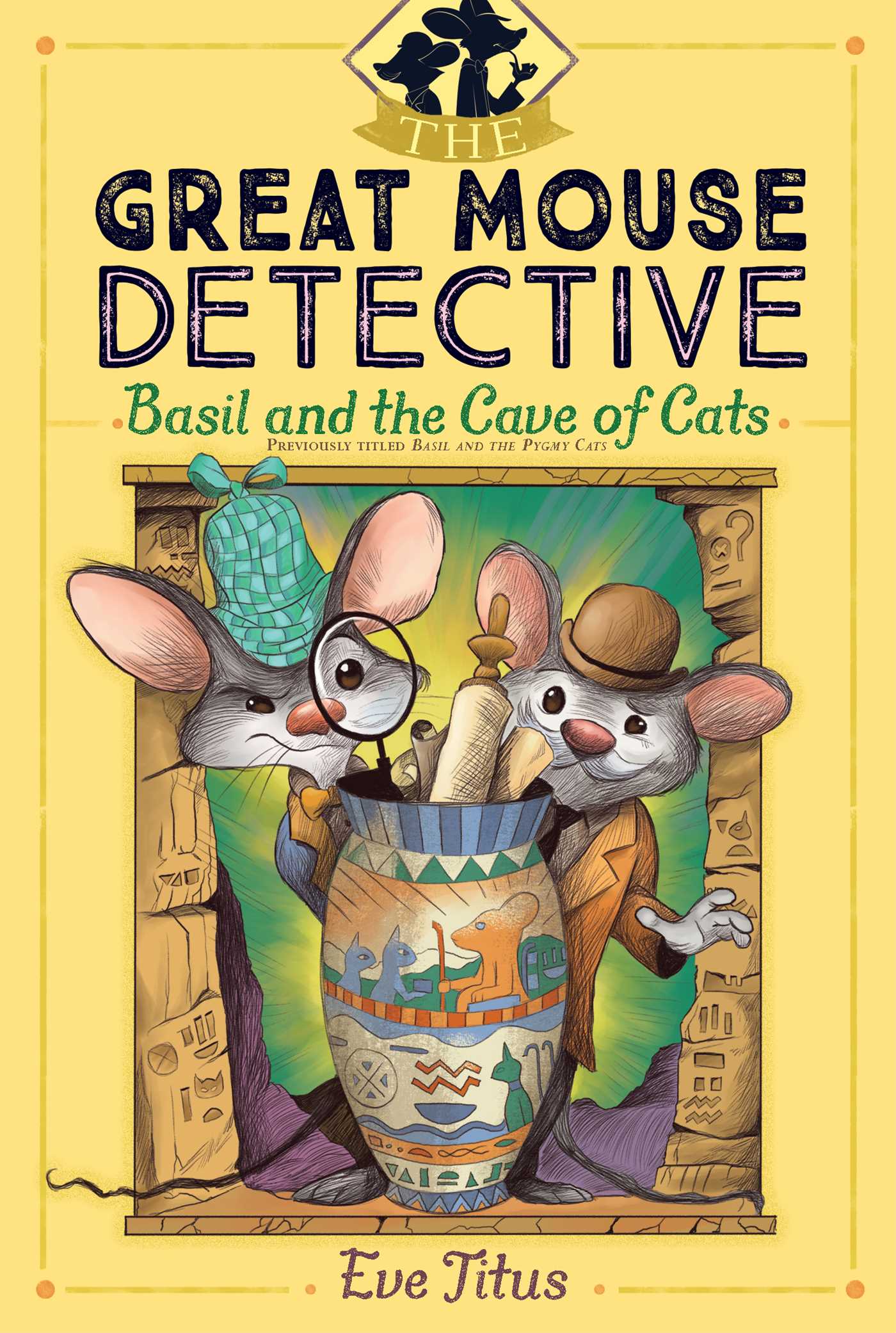 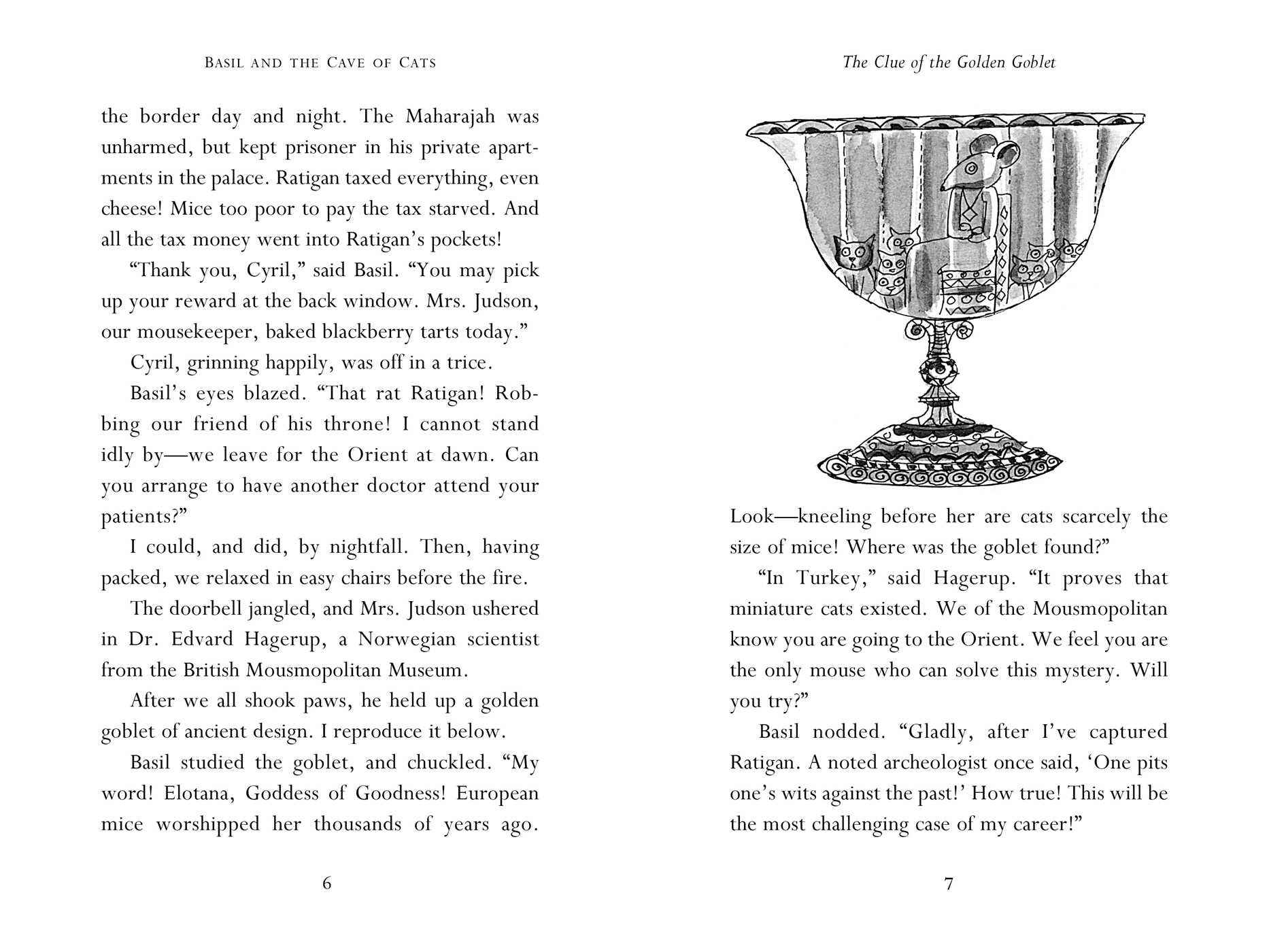 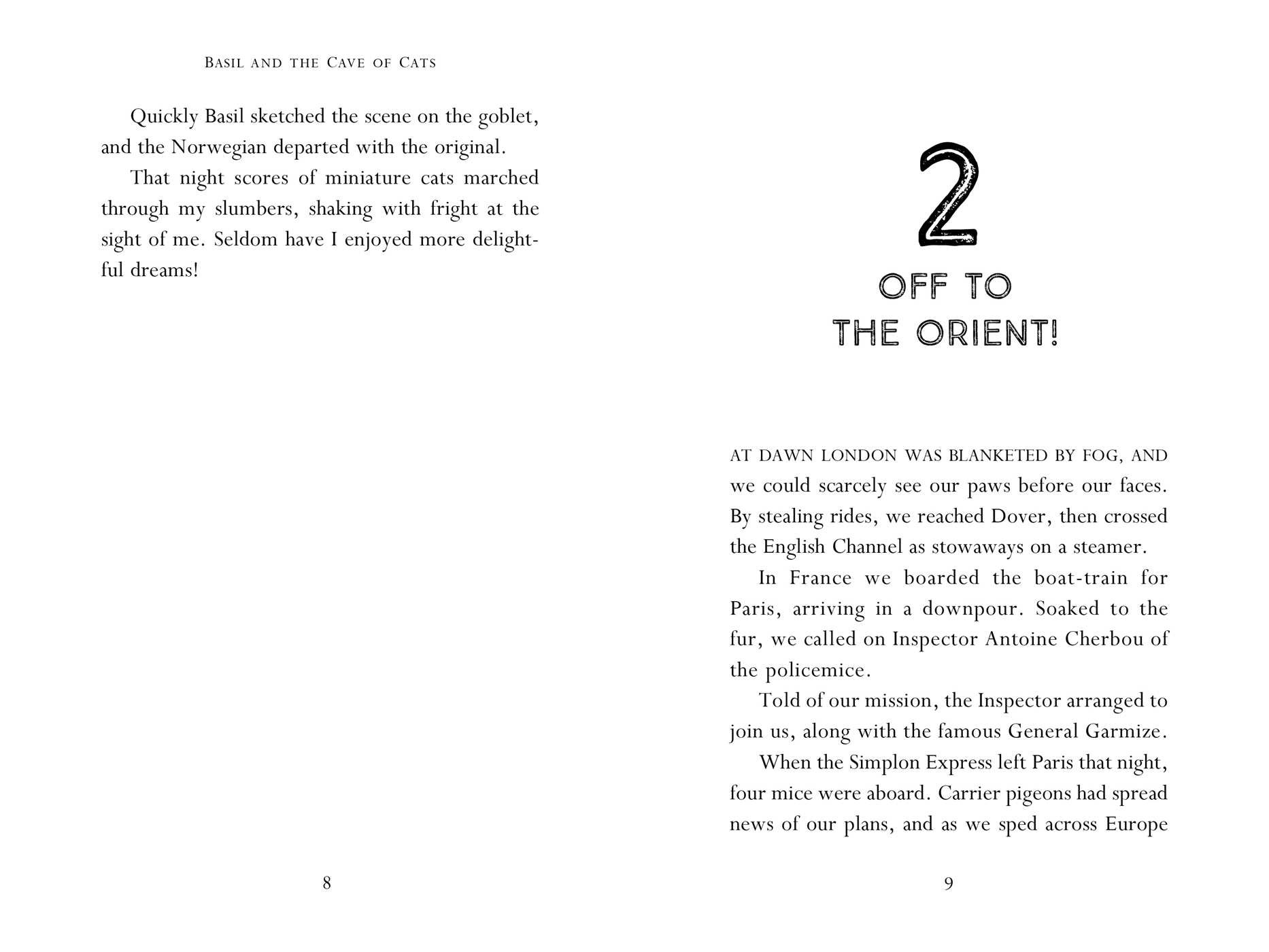 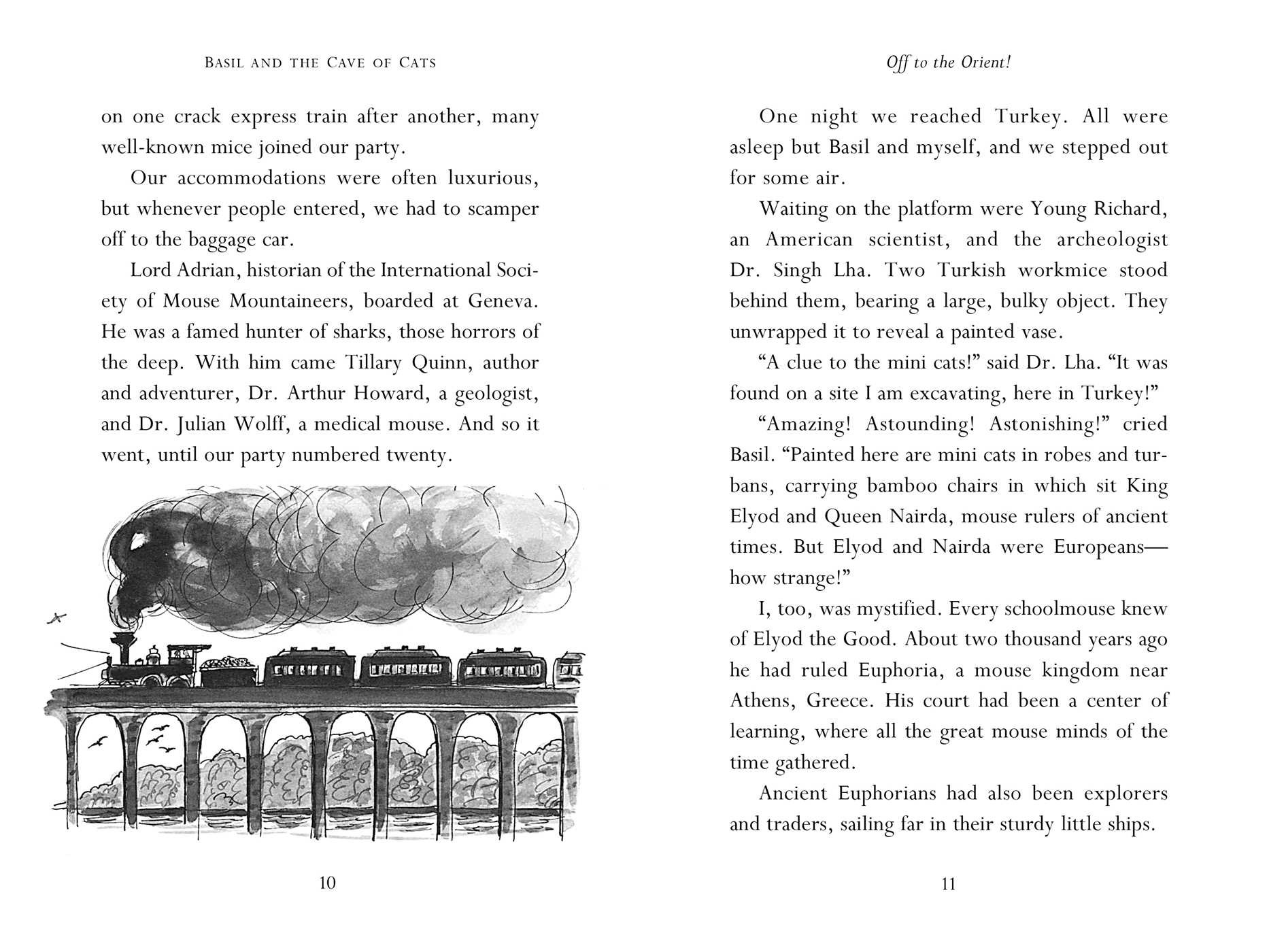 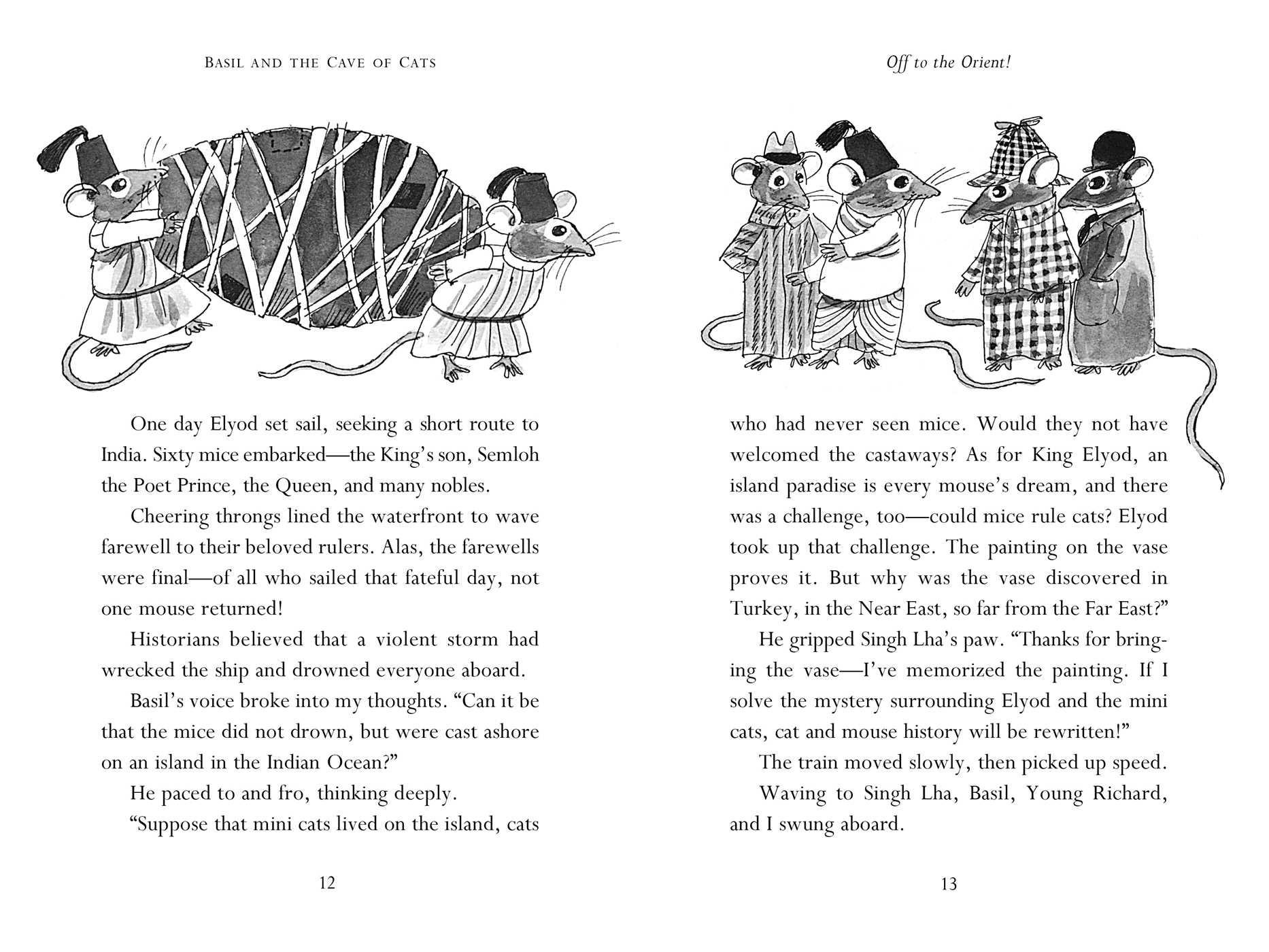 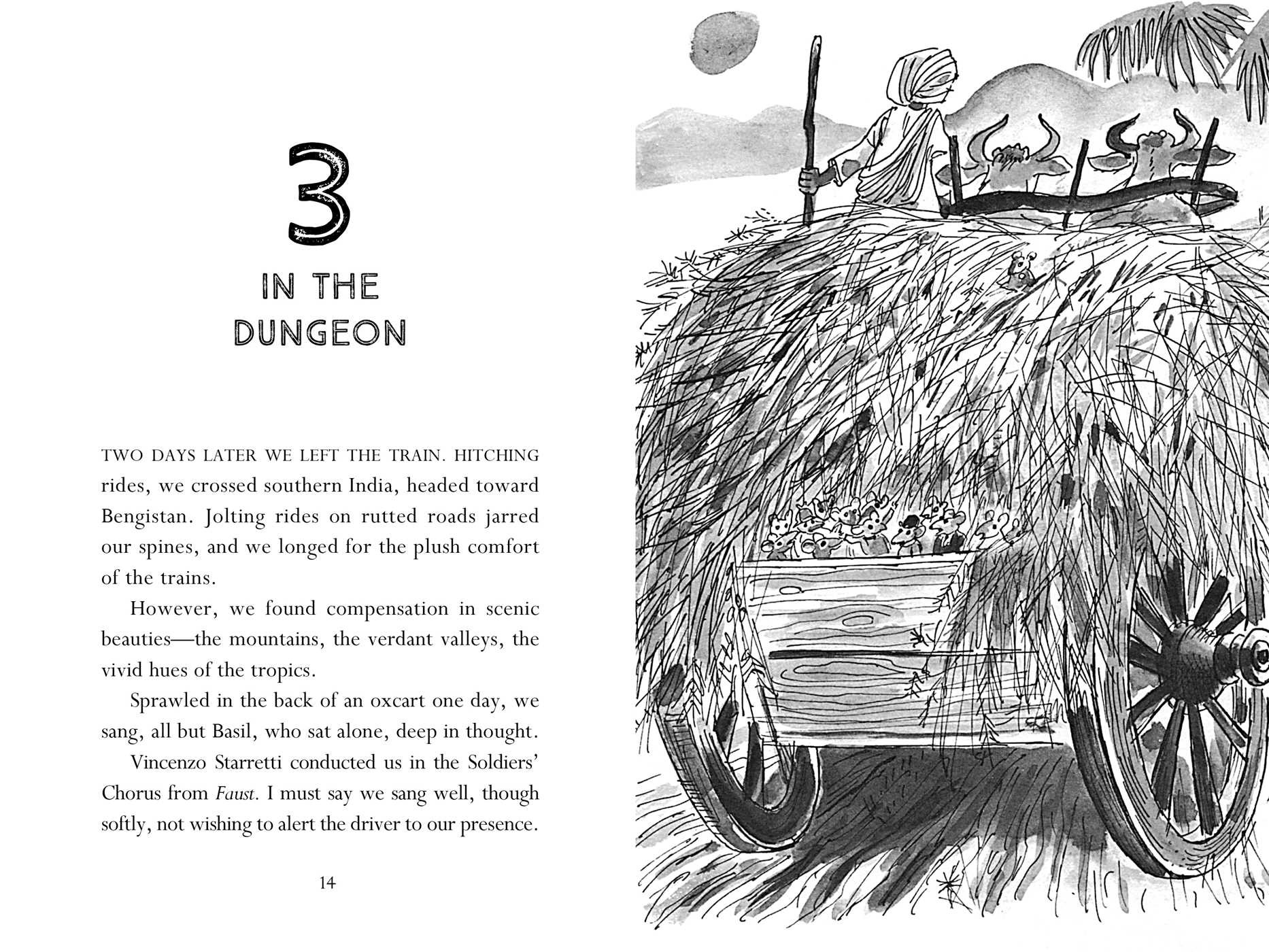 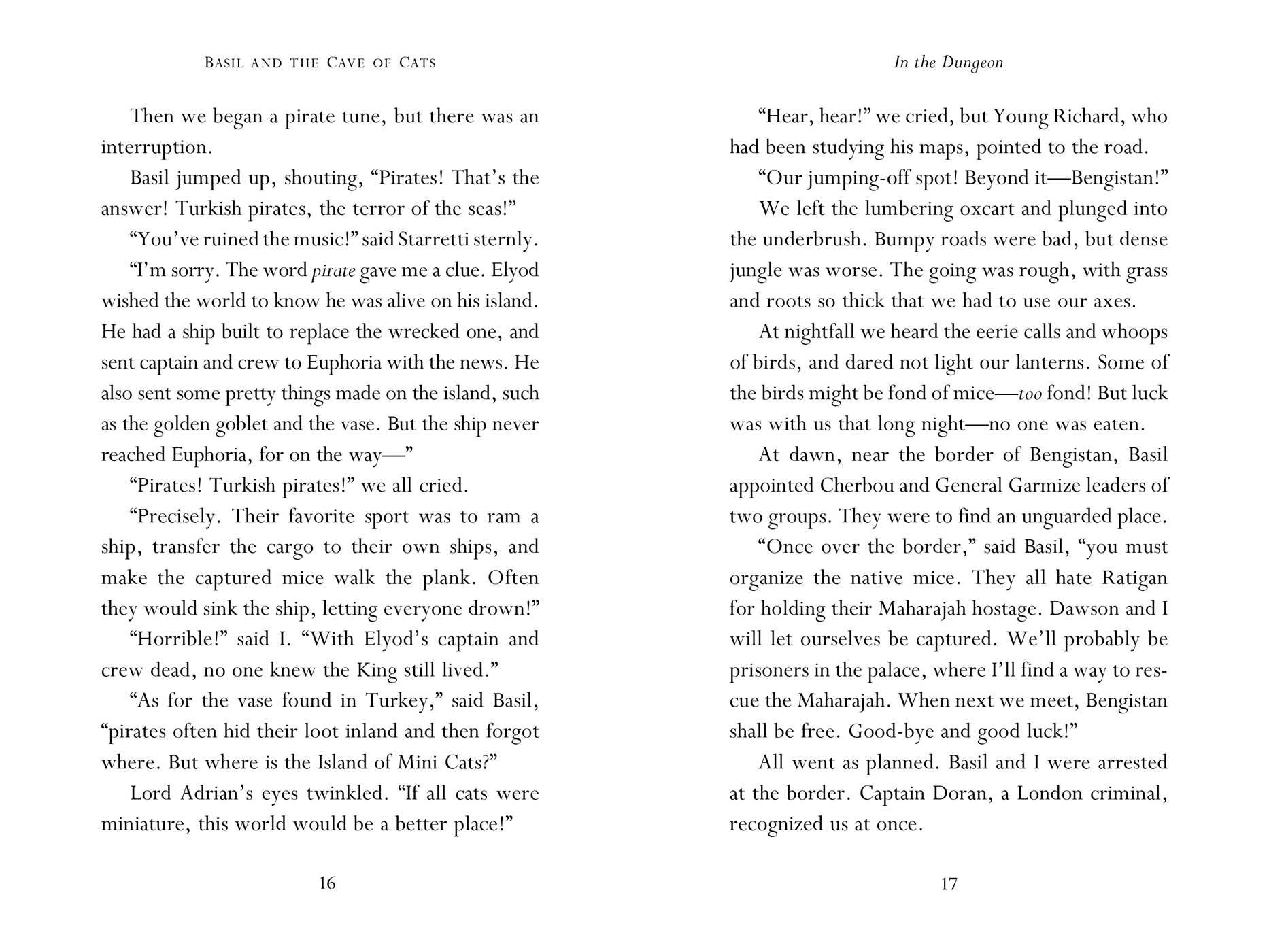 Basil and the Cave of Cats

Book #2 of The Great Mouse Detective
By Eve Titus
Illustrated by Paul Galdone
LIST PRICE $16.99
PRICE MAY VARY BY RETAILER

Named one of “13 Detective Book Series You Obsessed over as a Kid” by Buzzfeed.com and the inspiration for a hit Disney film, the masterful Great Mouse Detective series is now available to a whole new generation of readers!

Basil the mouse detective sets off on a journey to solve one of the greatest mysteries of mousedom: Do miniature cats exist? Leading mouse scientists aren’t certain, but they believe that answers can be found in India.

As Basil sets sail for the Far East—and the lost island of Kataarh—danger stalks him at every turn. Will Basil successfully unravel the mystery of these mini-cats and their mouse king?

Basil and the Cave of Cats 1 THE CLUE OF THE GOLDEN GOBLET
MINIATURE CATS! BREATHES THERE, IN all the world, a mouse who is not stirred by those two words?

Did the miniature monsters actually exist? Our leading mouse scientists were not certain, but they all believed the answer would be found in the Orient.

It was Basil of Baker Street, the Sherlock Holmes of the Mouse World, who solved the mystery. He used his skill as a scientific sleuth to bring to light secrets long hidden behind the curtains of the past, secrets no other mouse had been able to discover.

Professor Ratigan, leader of the mouse underworld, stalked him at every turn! Danger was Basil’s constant companion. Ratigan’s spies were at the border, in the jungle, on the ship, and—

But let me tell you how the adventure began. . . .

The year is 1894. The place is London, England, at Baker Street, Number 221B, where live Mr. Sherlock Holmes and his friend, Dr. John H. Watson.

We dwell in the cellar of 221B, in the mouse town of Holmestead, which Basil named after his hero. My friend would often scurry up secret passageways to Mr. Holmes’ rooms. There he would take notes in shortpaw as the human detective told Dr. Watson exactly how he solved his difficult cases. One might say that Basil studied at the great man’s feet.

Did Mr. Holmes ever see his small admirer, hidden in a corner? I believe he did, and that it pleased him to pass his methods on to a mouse.

And such a mouse! I am of average height, about five inches tall, but Basil towers a full inch above me.

My notebook is crammed with accounts of his cases. I am a busy doctor, but whenever possible, I take pen in paw to write of his achievements. Would that I had time to narrate them all!

There was the Mystery of the Bald-Headed Mouse, a bank director. One foggy morning he stepped out of his office and vanished, along with a lot of the bank’s money. Mouseland Yard detectives sought him with no success, but Basil studied the clues and found the bald banker in Edinburgh, wearing a wig and using another name. Most of the stolen funds were untouched, for spending large sums in Scotland would have drawn attention to the thief at once.

Then there was the Case of the Guinea-Pig Gang. The honest mice of London dared not venture out at night until Basil cleverly found the criminals’ hideout and had them all jailed.

But of all his cases, Basil’s own favorite is the Adventure of the Cave of Cats. It put to use all his remarkable skill as a sleuth, plus his vast knowledge of the science of archeology.

Basil’s hobby was archeology. He had discovered Rockhenge, the ancient mouse ruins near London.

Interviewed by newspapermice, Basil said, “The most exciting detective work in the world is archeology! As we dig, clues keep turning up. Arrowheads, old weapons, broken bowls—any or all may hold clues to the life and times of prehistoric mice. The calendar stone I found at Rockhenge, for example, proved that mice perfected a 365-day calendar long before mankind. Clearly, archeology is the highest form of detective work, for lessons we learn from the past help mice to build a better, brighter future!”

The clues concerning the cave of cats were to take us halfway across the world, to the Far East.

Originally we had planned our trip to the Orient for a different reason—to restore the Maharajah of Bengistan to his rightful throne.

Cyril the Stoolpigeon had brought word that our enemy, Professor Ratigan, now ruled Bengistan, a mouse kingdom near India.

Too large to enter, the pigeon stood at our window to tell us what a little bird had told him.

In a surprise move the Professor and his gang had stormed and taken the palace. They guarded the border day and night. The Maharajah was unharmed, but kept prisoner in his private apartments in the palace. Ratigan taxed everything, even cheese! Mice too poor to pay the tax starved. And all the tax money went into Ratigan’s pockets!

“Thank you, Cyril,” said Basil. “You may pick up your reward at the back window. Mrs. Judson, our mousekeeper, baked blackberry tarts today.”

Cyril, grinning happily, was off in a trice.

Basil’s eyes blazed. “That rat Ratigan! Robbing our friend of his throne! I cannot stand idly by—we leave for the Orient at dawn. Can you arrange to have another doctor attend your patients?”

I could, and did, by nightfall. Then, having packed, we relaxed in easy chairs before the fire.

The doorbell jangled, and Mrs. Judson ushered in Dr. Edvard Hagerup, a Norwegian scientist from the British Mousmopolitan Museum.

After we all shook paws, he held up a golden goblet of ancient design. I reproduce it below.

Basil studied the goblet, and chuckled. “My word! Elotana, Goddess of Goodness! European mice worshipped her thousands of years ago. Look—kneeling before her are cats scarcely the size of mice! Where was the goblet found?”

“In Turkey,” said Hagerup. “It proves that miniature cats existed. We of the Mousmopolitan know you are going to the Orient. We feel you are the only mouse who can solve this mystery. Will you try?”

Basil nodded. “Gladly, after I’ve captured Ratigan. A noted archeologist once said, ‘One pits one’s wits against the past!’ How true! This will be the most challenging case of my career!”

Quickly Basil sketched the scene on the goblet, and the Norwegian departed with the original.

That night scores of miniature cats marched through my slumbers, shaking with fright at the sight of me. Seldom have I enjoyed more delightful dreams!
Eve Titus

Basil and the Cave of Cats

Book #2 of The Great Mouse Detective
By Eve Titus
Illustrated by Paul Galdone
LIST PRICE $16.99
PRICE MAY VARY BY RETAILER