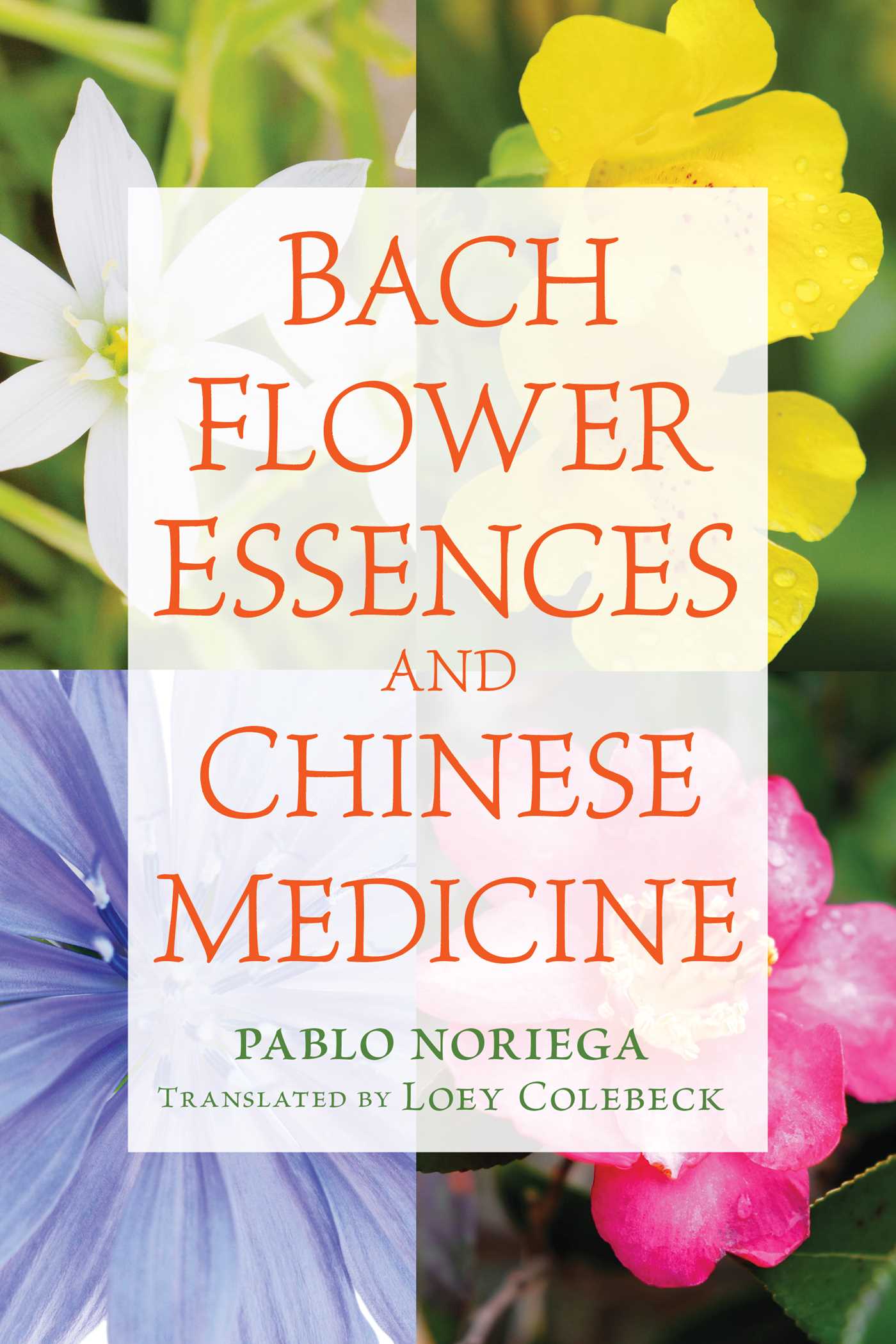 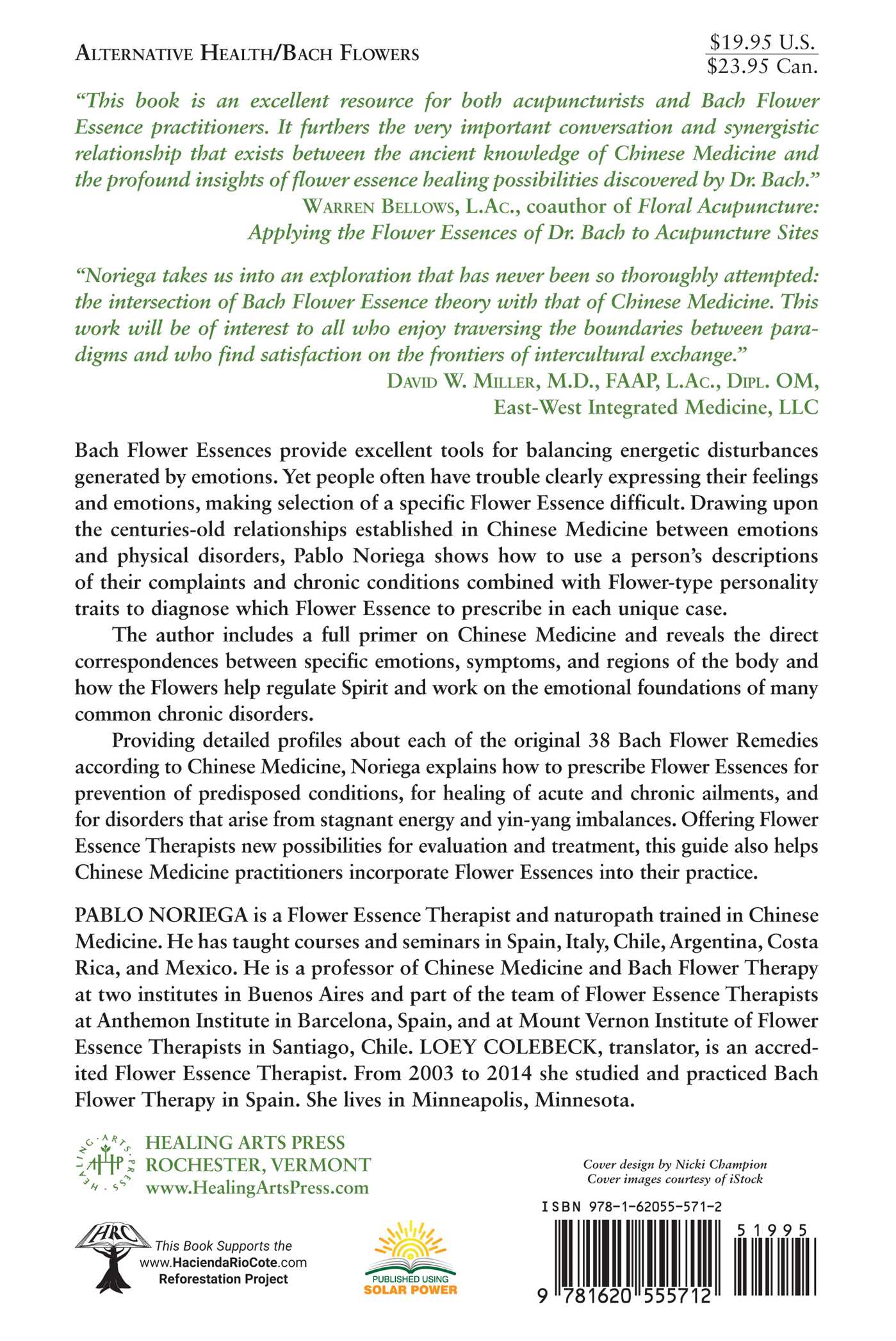 • Explains the relationships between specific emotions, symptoms, and regions of the body according to Chinese Medicine

Bach flower essences provide excellent tools for balancing energetic disturbances generated by emotions. Yet people often have trouble clearly expressing their feelings and emotions, making selection of a specific flower essence difficult. Drawing upon the centuries-old relationships established in Chinese Medicine between emotions and physical disorders, Pablo Noriega shows how to use a person’s descriptions of their complaints and chronic conditions combined with Flower-type personality traits to diagnose which flower essence to prescribe in each unique case.

The author includes a full primer on Chinese Medicine, exploring in detail the main principles: Yin and Yang; the Five Elements and their associated Organs; Blood and Energy; the Virtues, the behaviors that can strengthen the Elements; and the Psyches, the energetic spirit of each Organ. He reveals the direct correspondences between specific emotions, symptoms, and regions of the body and how the Flowers help regulate Spirit and work on the emotional foundations of many common chronic disorders.

Providing detailed profiles about each of the original 38 Bach flower remedies according to Chinese Medicine, Noriega explains how to prescribe flower essences for prevention of predisposed conditions, for healing of acute and chronic ailments, and for disorders that arise from stagnant energy and yin-yang imbalances. Offering flower essence therapists new possibilities for evaluation and treatment, this guide also helps Chinese Medicine practitioners incorporate Flower Essences into their practice.

This flower has extensive influence on the Organs and their territories, due possibly to the fact that the type of fixation and emotions that it treats are related to very primary areas of the human being, such as fear and its related territory.

Let’s look at which Organs may be touched by Mimulus’s way of being in the world.

Liver disturbances may be common due to the fact that many of the Mimulus person’s emotions and ways of being damage the capacity to softly and uniformly move Energy and Fluids, a function that assists the development of multiple processes in the human being.

The Transpersonal Pattern is very clear here, synthesized in a retraction of impulse at many levels in the Mimulus person. This intent to slow or detain the river of Energy has consequences that are expressed in different areas depending on the person’s constitution and history.

When--as a consequence of the above-mentioned sentiments and modes--Energy, Blood, and Fluids do not circulate smoothly, rigidity of body and mind sets in. The characteristic softness of the Liver is lost. Fluids, and denser substances like mucus and cysts, may accumulate in various parts of the body.

Persistent stagnation of Energy creates Heat, gestating an irritability that can evolve into resentment.

The Liver’s Psyche provides, among other aspects, the capacity for extroversion and the impulse for initiating action. If these qualities lack sufficient strength to be put into play, frustration is the emotion that naturally arises; this is a clear consequence of the inability to express one’s plans, feelings, and opinions.

The Mimulus-type person spends a great deal of time worrying. He attempts to prevent and control circumstances by anticipating them in thought. In the best possible case, these thoughts are a means of opposing fear with reason.

The problem is that the Energy used for these processes comes from the Spleen, in detriment to food distribution and assimilation and likewise to the production and distribution of Blood and Energy.

Debility in the Spleen’s Psyche prepares the ground for a growth in shyness and sense of inferiority.

A large portion of Mimulus’s Energy is lost in the need to keep everything under as much control as possible.

The pessimistic, negative contents of Mimulus’s thoughts and worries impact this Organ. Excess introversion may originate as much in a deficient Liver Psyche as in disorders of the Lung’s Psyche. When there is a deficiency in the latter, the ability to adapt to life’s changes is lost, a tendency toward isolation grows, and the person is more vulnerable.

The relationship between fear and the Kidneys is well known.

Many people have observed that one of the effects of fear can be urinary incontinence. Fear causes Energy to descend. The legs and knees feel weak and shaky. The Kidney’s Energy loses solidity and shrinks.

Fear has many effects; it ages, takes away strength and immunity, deteriorates bones, delays the knitting of fractures, weakens the lumbar area, and, when it is extreme, creates paralysis (Rock Rose).

If persistent, fear can upset one’s growth rate, sexual vigor, and reproductive capacity. It can also create Blood deficiency disorders and imbalances in quantity, and frequency of urination.

When edemas are present, we might consider fear as a factor. Shallow breathing may lead us in the same direction, as may asthma and respiratory fatigue.

Weakness in the Kidney’s Psyche will be found in areas related to authority, affirmation, and determination. This Psyche must be strengthened in order to gain security and reduce vulnerability.

Kidney imbalances can be observed when fear-related emotions arise, such as apprehension, phobia, cowardice.

Audacity can show up in some cases to compensate for retraction, but boldness is difficult to sustain as it uses up the little Energy that this personality type has in the first place. In other cases, as Ricardo Orozco mentions, a Vine attitude appears and may persist over time provided the person in question is not a Mimulus type with a weak Kidney constitution, evident in the person’s fragile appearance (curved posture and paleness). This Organ is in charge of giving strength and solidity to the physical body. Bones are supported by Kidney Energy.

Wisdom is the Virtue corresponding to the Kidney. It provides balance between excessive caution and daredevilry. This Organ also gives us the capacity to keep calm when posed with the fear that arises when facing the unknown. The Spleen bestows us with the capacity to maintain our integrity while at the same time paying attention to the exchange and distribution of vital Energy shared with another person, guaranteeing the integrity of both parties.

Heather essence can help the Mimulus person not be so self-centered in his worries. Other essences can help provide Energy, like Centaury, Clematis, and Olive, as well as those that help with stagnation, like Crab Apple, Willow, Chicory, and Cherry Plum.

I agree with my colleague Josep Guarch when he says that Mimulus rejects himself, believing that others are going to evaluate him using the same measure; that is why he acts as Ricardo describes, “with a clear Avoidant conduct meant to protect him from ridicule, humiliation, and above all, negative judgment and rejection.”

That which is unfathomable, dangerous, and mysterious finds its home in Water, and the Mimulus plant, as we see in its signature, lives at the edge of running water. The Mimulus person is often surprised to find that he has the strength and resources for facing that which he fears. At those times, like the plant, he deepens his roots so he won’t be carried away in the current.
Pablo Noriega

Pablo Noriega is a flower essence therapist and naturopath trained in Chinese Medicine. He has taught courses and seminars in Spain, Italy, Chile, Argentina, Costa Rica, and Mexico. He is a professor of Chinese Medicine and Bach Flower Therapy at two institutes in Buenos Aires and part of the team of flower essence therapists at Anthemon Institute in Barcelona, Spain, and at Mount Vernon Institute of Flower Essence Therapists in Santiago, Chile. Loey Colebeck, translator, is an accredited flower essence therapist. From 2003 to 2014 she studied and practiced Bach Flower Therapy in Spain. She lives in Minneapolis, Minnesota.

“In Bach Flower Essences and Chinese Medicine Pablo Noriega takes us into an exploration that has never been so thoroughly attempted: the intersection of Bach Flower Essence theory with that of Chinese Medicine. Both fields hold in high regard the role that the mind and emotions play in human health and suffering. Restoration of balance in the psycho-spiritual realm is highly prized by both paradigms. The brilliance of Bach’s theory is in the careful observation of complex human conditions and the identification of plant energies that can harmonize dissonant mindsets. Chinese Medicine also prizes the study of the mind and emotions and how these relate to disease development and has carefully cataloged these in domains of human function known as the five organ systems. Noriega deftly weaves discussion of how these two systems inform one another, giving greater insight into both fields. He expands treatment options for practitioners of Chinese Medicine and broadens treatment context for practitioners of Flower Essence Therapy. This work will be of interest to all who enjoy traversing the boundaries between paradigms and who find satisfaction on the frontiers of intercultural exchange.”

“This book is an excellent resource for both acupuncturists and Bach Flower Essence practitioners. It furthers the very important conversation and synergistic relationship that exists between the ancient knowledge of Chinese Medicine and the profound insights of flower essence healing possibilities discovered by Dr. Bach.”

– Warren Bellows, L.Ac., coauthor of Floral Acupuncture: Applying the Flower Essences of Dr. Bach to A