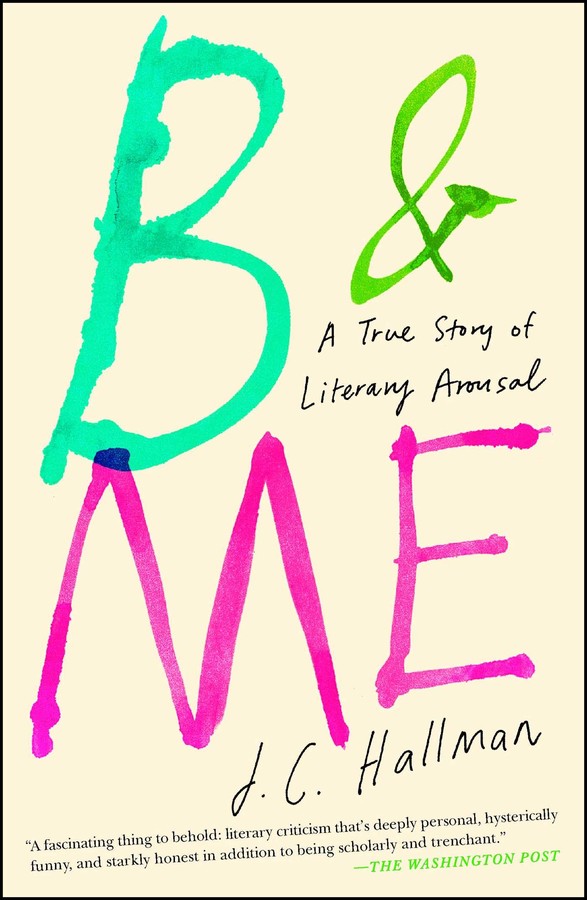 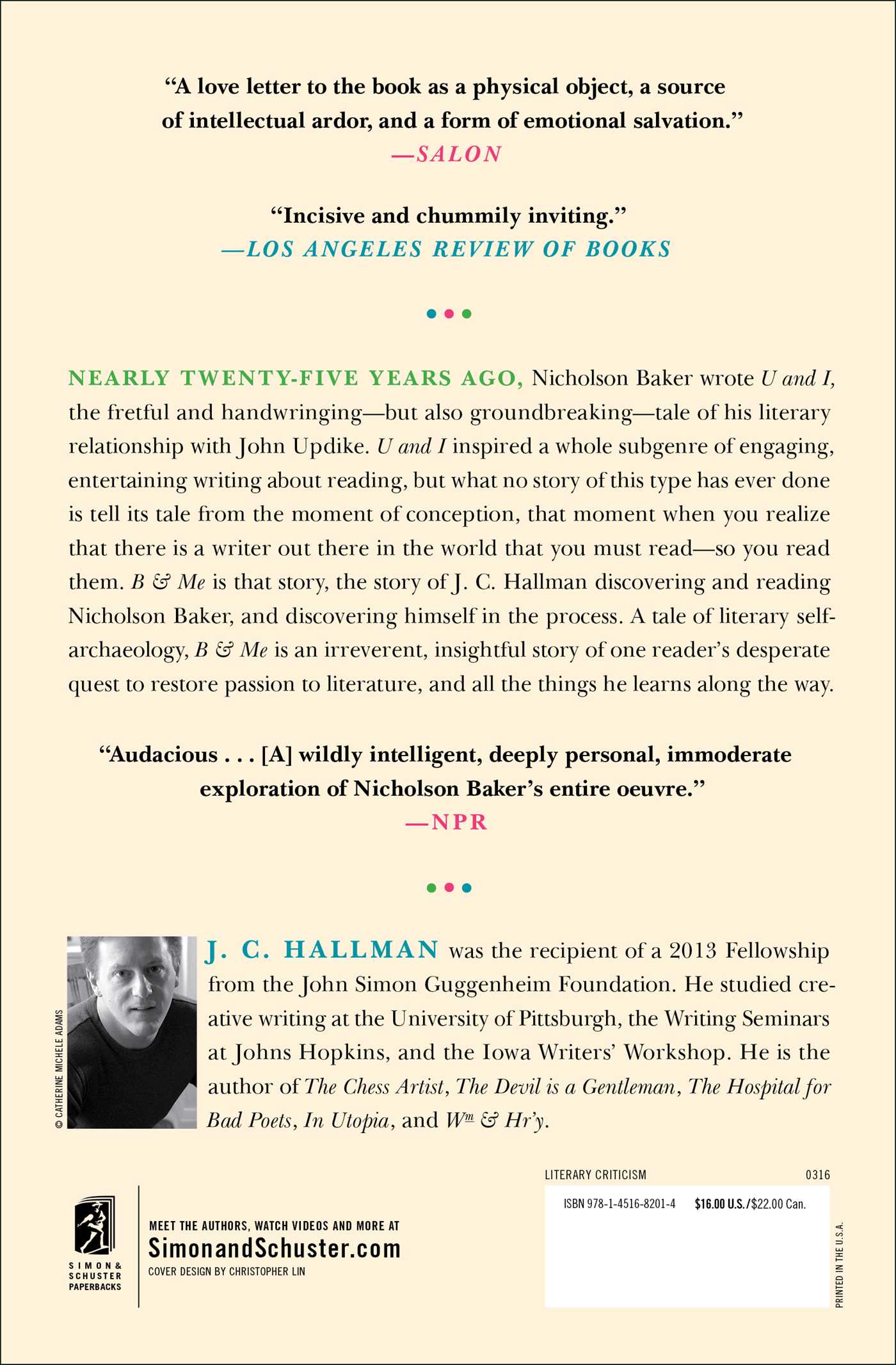 “A love letter to the book as a physical object, a source of intellectual ardor, and a form of emotional salvation” (Salon)—and a nod to U and I, Nicholson Baker’s classic memoir about John Updike—from an award-winning author called “wonderfully bright” by The New York Times Book Review.

Nearly twenty-five years ago, Nicholson Baker wrote U and I, the fretful and handwringing—but also groundbreaking—tale of his literary relationship with John Updike. U and I inspired a whole sub-genre of engaging writing about reading, but what no story of this type has ever done is tell its tale from the moment of conception, that moment when you realize that there is writer out there in the world that you must read. B & Me is that story, the story of J.C. Hallman discovering and reading Nicholson Baker…and discovering himself in the process.

Our relationship to books in the digital age, the role of art in an increasingly commodified world, the power great writing has to change us, these are at the core of Hallman’s investigation of Baker—questions he’s grappled with, values he’s come to doubt. But in reading Baker’s work, Hallman discovers the key to overcoming the malaise that had been plaguing him, through the books themselves and what he finds and contemplates in his attempts to understand them and their enigmatic author.

B & Me is literary self-archaeology: an irreverent, incisive story of one reader’s desperate quest to restore passion to literature, and all the things he learns along the way. “A wide-ranging and idiosyncratic career survey for Nicholson Baker’s work, a love letter to the act of reading, and a commentary on the modern novel, this is a book that readers will absolutely adore” (Publishers Weekly, starred review). 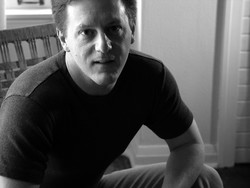 J.C. Hallman grew up in Southern California. He studied creative writing at the University of Pittsburgh, the Writing Seminars at Johns Hopkins, and the Iowa Writers’ Workshop. He is the author of B & Me, The Chess Artist, The Devil Is a Gentleman, The Hospital for Bad Poets, In Utopia, and Wm & H’ry. Hallman has also edited two anthologies, The Story About the Story and The Story About the Story II, which propose a new school of literary response called “creative criticism.” Among other honors, he is the recipient of a 2013 Fellowship from the John Simon Guggenheim Foundation.

“To say that B & Me is an odd book doesn’t quite do the project justice. . . . As provocative as this material is, Hallman’s inquiry has a deeper agenda. It’s a love letter to the book as a physical object, a source of intellectual ardor, and a form of emotional salvation.” —Salon

“Incisive and chummily inviting . . . Hallman is concerned about all books and all reading . . . and some of his most passionate, insightful writing arises in sections where he considers the bigger picture.” —Los Angeles Review of Books

“A bright, funny, and expansive account of a rewarding and investigative personal journey.”—Litkicks

“A labyrinthine odyssey . . . B & Me is a great love letter to literature itself, and a reminder that the writer’s job is to push further with each generation, to reorient our moral compass, and take back criticism from the critics.” —World Literature Today

"J. C. Hallman has written his best, funniest, and riskiest book, one that flirts deliciously at the edge of obnoxiousness before darting off into deeper, sager truths. Every writer or would-be writer will find much to relish, wince at and identify with here." —Phillip Lopate

“J. C. Hallman’s B & Me is a daring book. Its ostensible subject is the virtuosic and uncategorizable writer Nicholson Baker, but Hallman, borrowing a page from Baker’s book on John Updike, U and I, transforms appreciation into autobiography. The fact that Baker has already played this trick only raises the stakes for Hallman: what can he say about Baker that Baker hasn’t said about Updike? But the fact of the matter is that Hallman pulls it off. He reads Baker brilliantly and compellingly, and at the same time, he tells a moving personal story, about love and fame, envy and admiration, which says as much about what it’s like to be a writer now as U and I ever said about the writing world of the 1970s and ’80s.” —Paul La Farge

“Witty . . . Hallman is a talented writer . . . B & Me is a wide-ranging and idiosyncratic career survey for Nicholson Baker’s work, a love letter to the act of reading, and a commentary on the modern novel. It’s difficult to do Hallman’s work justice, but this is a book that readers will absolutely adore.” —Publishers Weekly (starred review)