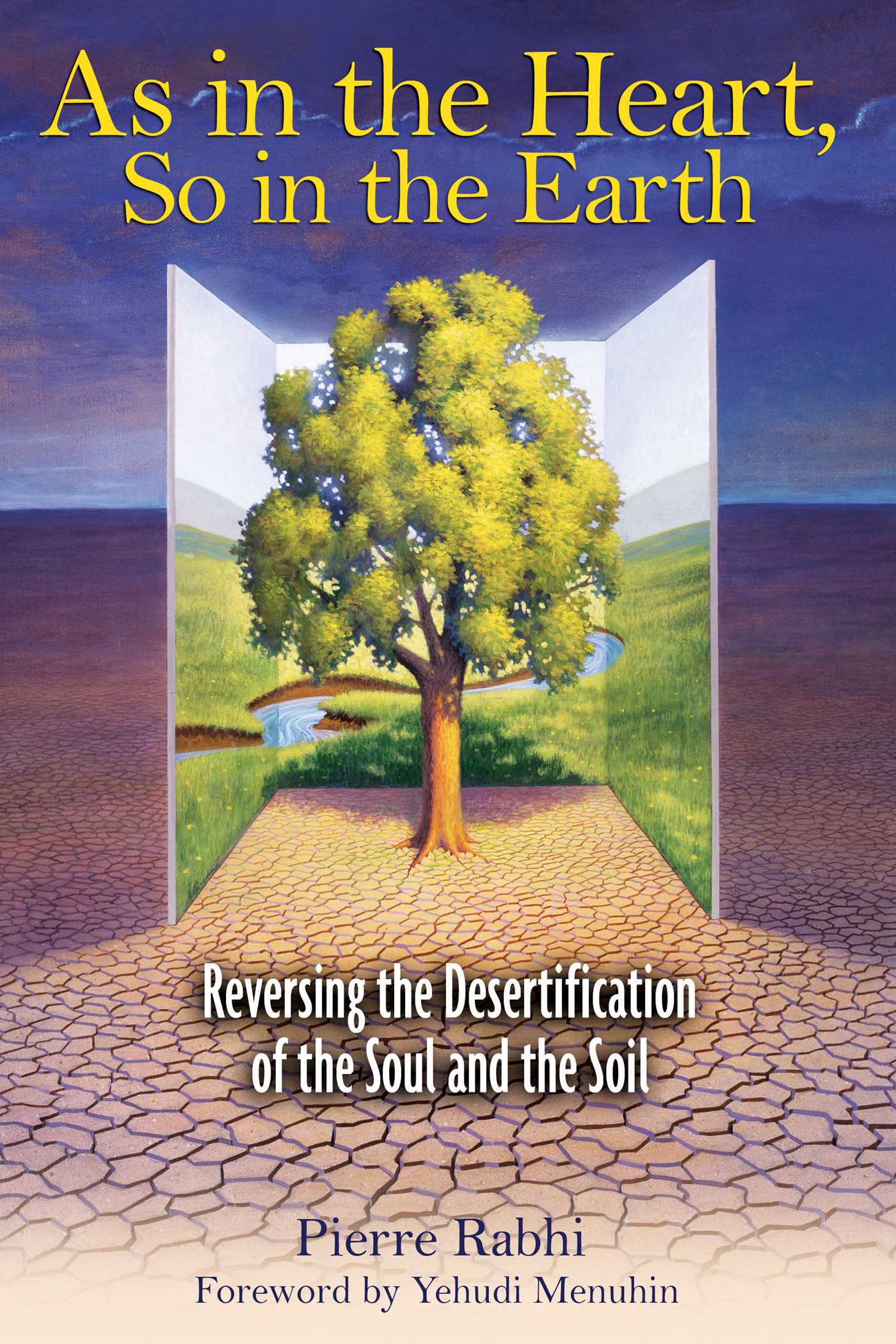 As in the Heart, So in the Earth

Reversing the Desertification of the Soul and the Soil

As in the Heart, So in the Earth is a strong indictment of a civilization that, while seeking domination over the earth, mutilates, tortures, and desacralizes it. For Pierre Rabhi ecology is inseparable from spirituality. He shows how the growing desertification of North Africa is a reflection of the “desert” that is claiming the hearts and souls of the inhabitants of the Western world--how dead soil is mirrored in our deadened souls--and how reconciliation with Mother Earth must be accompanied by relearning our ancestors’ reverence for the soil.

Using a traditional African parable grounded in the very wisdom of the earth, Pierre Rabhi seeks to initiate the reader into a time when the people that dwelled on this planet did so harmoniously and could converse easily with the land. Village elder Tyemoro recounts the gradual destruction of his village’s culture and all that has sustained it as the miracles promised by modern technology brought more harm than good. This same drama is recurring throughout the world, where indigenous value systems that have endured for millennia are torn apart by contact with modern civilization. Yet Rahbi offers hope--if those in the modern world will stop to hear the words of their ancestors who worked the land, for our destiny is linked irrevocably to that of the earth.

The very next day I made my first formal visit to Tyemoro. He immediately noted this, pointing out that I was carrying my "word trap," as he called my cassette recorder. He led me into his room, for the heat and the flies were unbearable outside.

"Tyemoro, my friend, I have come now to ask you to speak of your land. I know that things today are not the way they were before. Why have so many young people left? Why has the village shrunk so much so that mostly old people are left? Why do you have so little food now? Why is the land in such bad shape, and can anything be done about it?"

Obviously startled by my questions, the old man remained silent for a long time. It was an uncomfortable silence for me, because I wondered if my questions somehow offended him. In any case, I consoled myself with the certainty that he would have no difficulty dealing with them, even if that were the case. The Batifon language has many exquisite and very courteous formulas for saying no so as not to insult a guest or violate the rules of hospitality. Finally, when he had overcome his surprise, Tyemoro began to speak with his usual eloquence, becoming the very incarnation of his words.

"I have thought much about this, day and night. Long ago, I asked myself why our life was changing like this. Have we offended the Great Designer in some way? Perhaps we have not shown proper respect for his gifts? Or have our children angered the spirits of the ancestors by leaving the way they have? I do not know. Many times I have spent the night alone up on the mountain. I hoped that in the mountain's secret something would come into my mind to tell me what we have done wrong and how we can make up for it. Sitting in the dark night, with the jackals and serpents around me, I stretched my body out on the naked rock, still hot from the day's burning sun. But no answer came to me, either in waking or in sleep.

"How many dawns have I watched being born, glowing greater and brighter before the sun finally appears? Sitting there on the mountain, I looked at the desert below and remembered what my father's father used to say. In his time, there were trees everywhere--so many of them in some places that they crowded against each other, hiding the sky. Our people ate many fruits and wild animals, which were abundant then. There was plenty of water, too, and the people caught many fish. Our ancestors always cultivated little parcels of land around the trees. Later, people started uprooting the trees, and the parcels became bigger. The forest was still full of dangerous animals in those days, and people had to be careful, especially with their children. There were even villages in the middle of the forest, with high wooden fences around them to keep out the animals. Every year, we had to burn the brush close to the village to drive away the poisonous serpents and other animals. We would trap some of them for our food. . . . That is what my grandfather used to say.

"In my father's time, things changed, but not very much. The parcels became bigger, and we began to trade our harvests with those of other people. We gave others things they lacked in exchange for things we lacked. Sometimes this led to quarrels, but not very serious ones. Some of us were better at hunting and others were better at farming. If somebody knew or learned something, everyone benefited from it. Our tribe was like a single body with many heads, arms, and legs. Every healthy child became an elder and every elder was once a child. The young learned from the old and the old were fed by the young. Nothing seemed to change, yet everything was always changing. Our chiefs guided us, for they had learned to listen to the voice of the secret. They showed us how to organize our life together. Our leaders' task was to keep the body of the people healthy, making sure it did not become sick because of the actions of one or another of us. Of course, things were not perfect. Some things were wrong, as always. Some men or women became jealous of each other. A few even became bitter and wicked with such thoughts and might even use poison against another. But still, life was good in the village. There was much that was good here, and we had many festivals.

"But now, we live in a great absence. I do not understand why we find ourselves faced with this great absence . . . When I was a child, the rainy season always arrived to water our seeds and make them grow. Only once or twice was there not enough rain. People joked about it, saying that the rain must have overslept. We knew its caprices, its delays, and sometimes its droughts. But it was never that bad, and we had nothing to worry about because we had plenty of grain stored from previous years. There was also plenty of wild game and fruits. One year we might have less food, but then the rain would come, and the next year we would refill our stores of grain. Some years more children than usual would die, like excess fruits falling from the tree of life. But others were born, and joy and sadness were woven together into the fabric of our days. I don't know why, but something always told us: Be patient, for all of this is the will of God. Our parents and ancestors, both the living and the dead, were linked together by this spirit.”
Pierre Rabhi

Pierre Rabhi was born in Kenadsa, an oasis in southern Algeria, and grew up in France. He is a consultant on agroecology for many international organizations, including the World Bank, and is a specialist in reversing the process of desertification. The author of several books, As in the Heart, So in the Earth is his first to appear in English. He lives and farms in the Ardeche region of France.

“Pierre Rabhi is calling us urgently towards an act of reconciliation with the Earth and his own life is an exemplary model of it.”

"From the moment we were told that we were to have dominion over the Earth, we have done nothing but destroy it. Pierre Rabhi superbly shows how this is also mirrored in our souls."

As in the Heart, So in the Earth

Reversing the Desertification of the Soul and the Soil