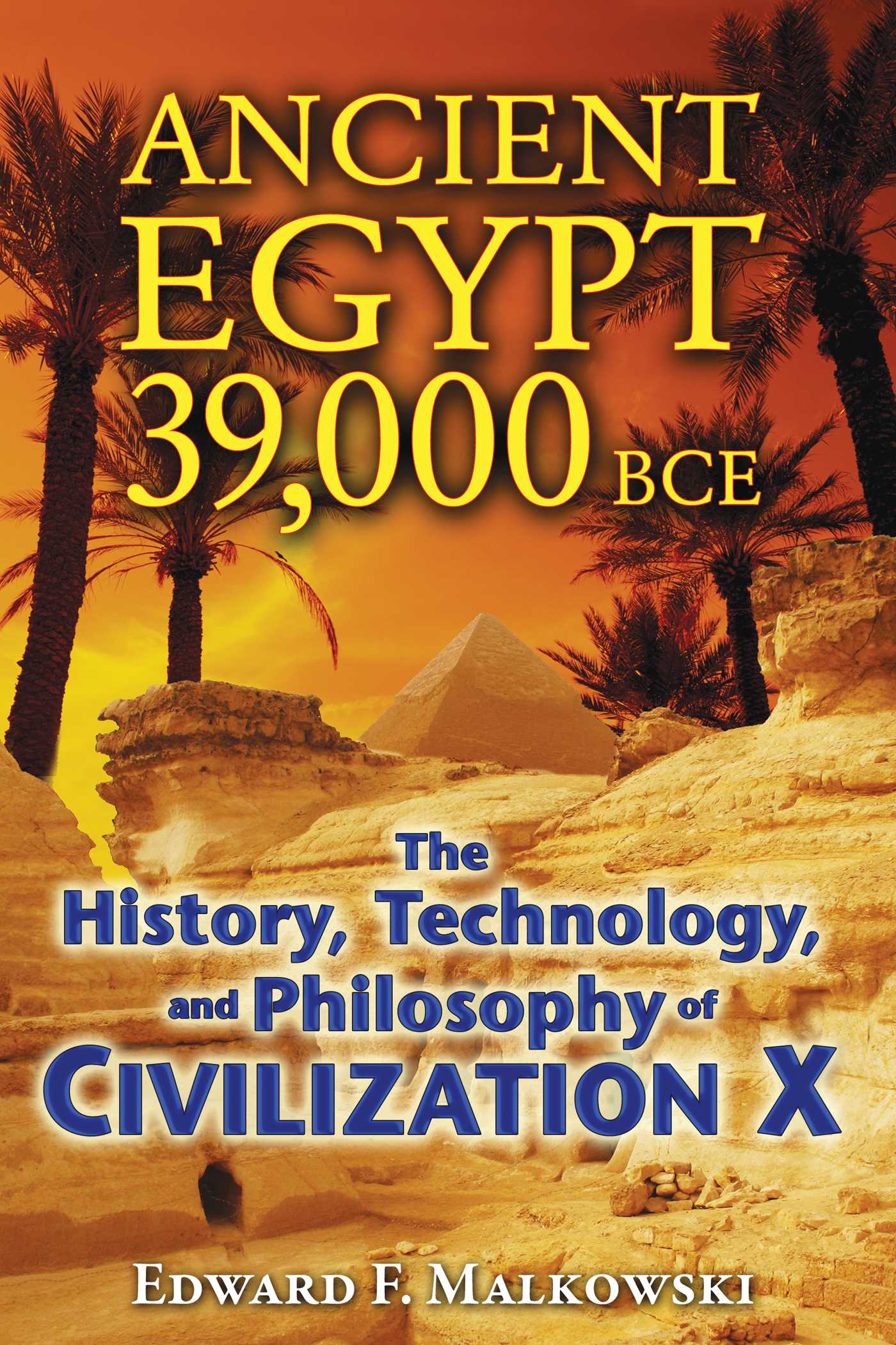 • Explains who these prehistoric people were, what happened to them, and why they built a series of pyramids along the west bank of the Nile River

Traditional Egyptologists have long resisted the notion that the architectural achievements of the Ancient Egyptians required the existence of a much more sophisticated technology than would have existed at that time. Yet, no records exist explaining how, why, or who built Egypt’s megalithic monuments and statues. The ancient Egyptians did, however, record that their civilization resided in the shadow of a kingdom of “gods” whose reign ended many thousands of years before their first dynasty. What was this Civilization X that antiquity’s most accomplished people revered as gods?

The recent discovery of a large stone at one of Egypt’s oldest ruins presents physical evidence that clearly and distinctly shows the markings of a machining process far beyond the capabilities of the Ancient Egyptians. Likewise, experimental modeling of the Great Pyramid’s subterranean chambers and passageways gives scientific evidence to further support the theory that the civilization responsible for such magnificent monuments is much older than presently believed. Ancient Egypt 39,000 BCE examines this evidence from historical and technical points of view, explaining who these prehistoric people were, what happened to them, why they built their civilization out of granite, and why they built a series of pyramids along the west bank of the Nile River.

Abu Rawash is a very important site. Not because it offers a view of a pyramid in progress, which is certainly unique and valuable, but because it contains irrefutable evidence of what tools the ancient Egyptians used to cut rock. To this day, the evidence is still there. Since I have never read about this evidence in any journal or seen it addressed in a film documentary, or even seen a picture of it on the Internet, apparently it is an unmentionable artifact, and possibly even a secret. Indeed, it is a secret that should be confiscated, hauled away, crated, and hidden; locked away in the basement of the Cairo Museum forever; an artifact that no orthodox archaeologist or Egyptologist would want to mention publicly.

It is the stone at Abu Rawash.

I first learned about this stone at a conference in Kempton, Illinois, on May 6, 2006. The conference was hosted by Adventures Unlimited Press. Christopher Dunn had returned that day from Egypt and had driven straight to the conference from Chicago’s O’Hare Airport to give a presentation. In his keynote address he presented many photographs; the stone at Abu Rawash was the final photo he displayed. While staring at the photo projected on the giant screen, I could hardly believe my eyes.

Nine months later Chris and I visited Egypt on a research trip.

Seeing is believing. Being at Abu Rawash--touching what may surely be the most significant find in the history of civilization--was the greatest experience of my life.

This incredible stone is located on the east side of the Abu Rawash pyramid about a third of the way south of the structure’s northeast corner. The stone measures approximately 56.75 inches long by 47 inches wide by 9 inches high. Workers from one of the past excavation teams must have pulled it from the rubble and placed it atop seven softball-sized stones. In pristine condition, most likely a result of being buried for thousands of years, it now rests about thirty feet from the base of the pyramid. Someday this granite slab may be considered to be as important as the Rosetta Stone, and for good reason.

It has long been speculated by those intrigued with history’s mysteries that an ancient, technical civilization existed during remote times. Such speculation, popularly referred to as the “Atlantis Syndrome” by skeptics and cynics, has created a resentment of sorts between so-called independent and academic researchers--what has been termed in the press as the “Orthodox” and “New Age” camps.

Like the skeleton that tells a story to the forensics expert, so does the granite stone at Abu Rawash tell a story to the experienced machinist. There is no mistaking the fact that a sophisticated technology was responsible for this stone’s existence. Its face or upright surface is smooth to the touch but not flat. Its surface is concave. At one end of the stone there is an arc separating the smooth surface from the rough surface. Chris Dunn determined that the radius was accurate over approximately 93 percent of the arc and, upon further technical analysis, he was also able to determine that the radius the arc belonged to was 23.684 feet (7.218 m).

Upon close inspection of the smooth portion of the stone, tiny lines--nearly microscopic--are visible across the width of the stone, traveling in the same direction as the arc. You can’t feel them with your hand, but you can see them if you look closely. Whatever device was used to cut this stone, it left a groove approximately .050 of an inch wide, which would normally be associated with the feed rate of the saw but could also indicate a blade with multiple cutting teeth.

There are five facts of great interest about this stone. First, whatever tool cut this slab of granite did so with relative ease, since the quartz crystals in the rock were cut as smooth and flat as the feldspar. Second, the tool that made the cut left an abrupt, exact terminating line in the shape of an arc between the smooth and rough portions of the stone. Third, whatever tool made the cut also rendered the stone concave along its width. Fourth, there are two slice marks (or steps) exhibited on the stone’s smooth surface. One is near the termination arc and the other on the opposite end. And fifth, there are machinist “feed lines” in the smooth part of the stone, along its breadth, running the length of the stone.

I talked with a granite expert at a local custom stone shop about ancient Egypt and methods of cutting stone. He insisted that everything in ancient times had been carved by hand. But when he viewed the photos of the stone at Abu Rawash all he could say was, “That’s crazy!” He said it three times and then finally exclaimed, “That had to have been done by a milling machine or something to make that type of cut!”

It could be a hoax, but if it were who would have the funds and the tools necessary to accomplish such a feat? A granite slab would have to be purchased (very expensive), then cut, and transported to Abu Rawash. The hoaxer would have to be a granite worker with access to expensive machinery or a very rich man with good connections.
Edward F. Malkowski

“Ancient Egypt 39,000 BCE presents a cogent and insightful overview of competing theories that relate to the possible origins of ancient Egypt, along with compelling, new, specific evidence to suggest that its megalithic structures may be far, far older than traditionally accepted. There is much food for thought here--even for a seasoned student of the mysteries of ancient Egypt--well conceived and well presented.”

– Laird Scranton, author of Sacred Symbols of the Dogon

“As our own civilization continues to make the kinds of fascinating discoveries Malkowski describes, I believe we may sooner than later find history to be quite different from what we thought it was.”

“Subtitled 'The History, Technology and Philosophy of Cvilization X', this is a groundbreaking study making a strong case for the existence of much more sophisticated technology than is currently acknowledged to have been involved in building the pyramids. . . This is a serious piece of work which deserves careful consideration.”