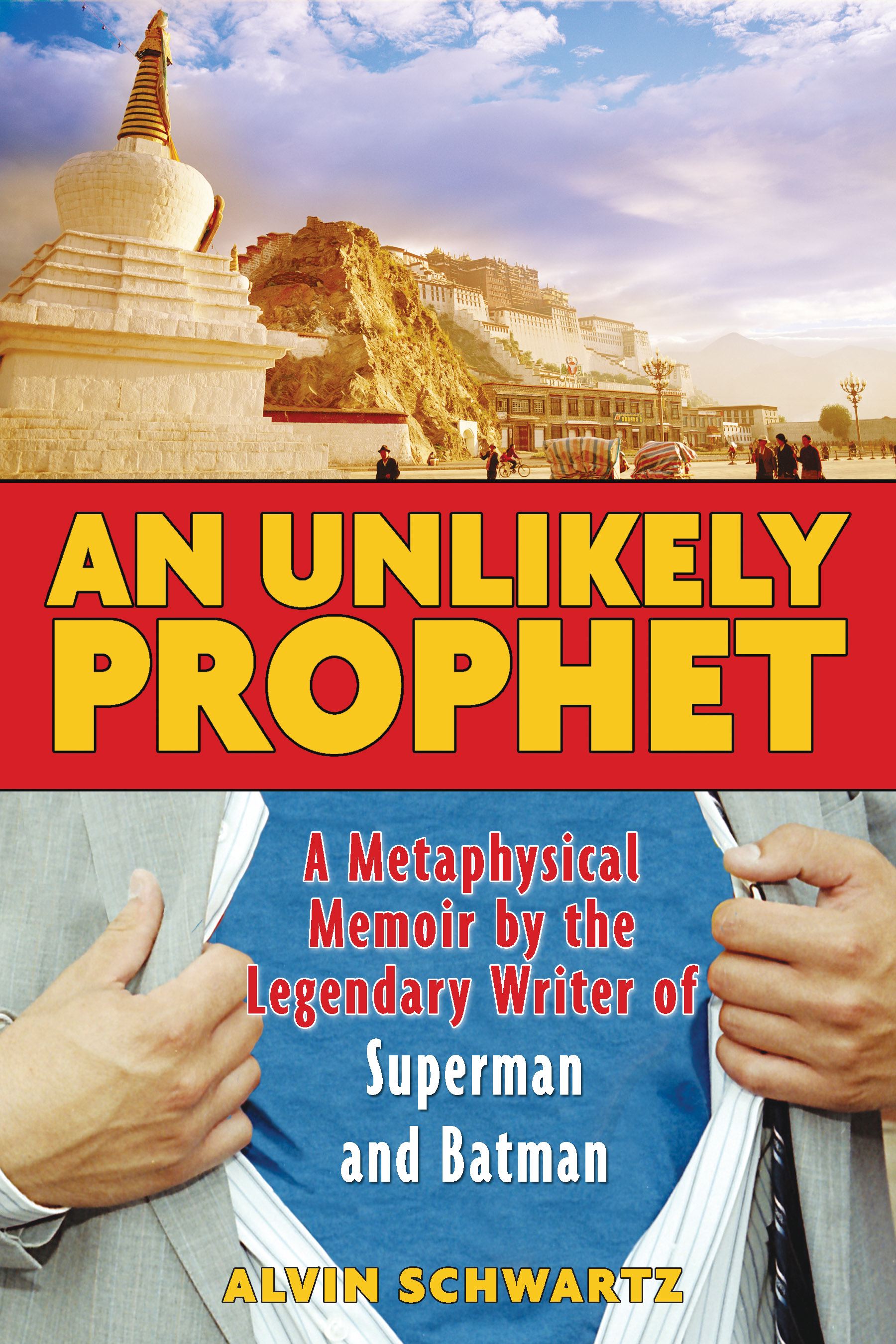 A Metaphysical Memoir by the Legendary Writer of Superman and Batman

By Alvin Schwartz
LIST PRICE $16.95
PRICE MAY VARY BY RETAILER

A profound investigation into the shifting nature of identity and reality

• Shows how Superman, an archetype of popular culture, is a perfect example of the nonlocality of quantum physics

Writer Alvin Schwartz received a great deal of attention from fans when he began talking publicly about his seventeen-year stint writing Superman and Batman comics. One of the individuals who contacted him was no ordinary fan, but a seven-foot Buddhist monk named Thongden, a tulpa or individual who was thought into being by a Tibetan mystic. Thongden put Alvin Schwartz on the path without form, an amazing journey he took in the company of Hawaiian kahunas, quantum physicists, and superheroes. Superman, as it turns out, is also a tulpa, a being created by thought that takes on a life of its own and, in Mr. Schwartz’s words, is an archetype expressing the sense of nonlocality that is always present in the back of our minds--that capacity to be everywhere instantly. Superman is one of the specific forms that embodies our reality when we’re at our highest point, when we’re truly impermeable, indestructible, totally concentrated, and living entirely in the now, a condition each of us actually attains from time to time.

Alvin Schwartz’s story is a personal journey through a lifelong remembrance of synchrony, inspiration, accident, and magic. As it unfolds it puts into vivid clarity the saving grace that inhabits every moment of our lives. The author travels as a stranger in a strange land, whose greatest oddity is that this land is our own.

To get to our home in northern Westchester without a car is virtually impossible. At least that's what I thought until my caller came pedaling up our long gravel driveway on an old bicycle. I had seen him coming, a tall, ungainly man with a face mostly hidden in the hood of a long raglan garment that fell below his knees so that it flapped loosely around him and whose obvious wind resistance must have made cycling extremely difficult. At that moment I had no idea who he was, but assumed, since he was bicycling, that he was from the neighborhood. When I went to answer his knock, I found myself looking up into the narrow, flat face of a man nearly seven feet tall who looked distinctly Oriental.

"In many ways," was his unexpected reply. "I am Mr. Thongden."

And then I placed him, even though he hadn't given me his name when he'd phoned. I recognized the accent. I'd never heard anything quite like it before.

I remained in the open doorway, feeling a little unneighborly for hesitating to invite him in. "I had no idea you were from around here," I said. "I don't remember ever seeing you before."

"Two days ago," I acknowledged. "But you didn't say you were local," I added, looking at the bike.

"Within bicycle range," he acknowledged with a sudden flash of teeth as he presented me with a smile. "Thirty-seven miles.”

"You came thirty-seven miles to see me--on that?"

"It was necessary, since I came from New York."

I had a vision of him laboriously pedaling his way amid the coursing traffic on the Taconic State Parkway, the startled drivers slowing to stare at the grotesque apparition formed by his great height draped in that shapeless anorak as it fluttered and twisted in the wind--Ichabod Crane on a bicycle.

"You must be tired," I said in sudden realization, opening the door a little wider, wordlessly inviting him inside despite my better judgment.

'Thongden," he said. "The only one in the phone book."

"Thongden," I repeated, somehow relieved that he was in the phone book. "It's certainly an unusual name. Asian, of course?" I felt I'd heard the name before. It was like a faint echo from long ago, elusive and vaguely discomfiting.

“You mean--it's not really your name?"

"I am basically nameless, but not without progenitors." He added, in response to my puzzled look, "We have much to talk about."

"I wouldn't be surprised," I admitted. I glanced down at the cold coffee in my cup. "Can I get you a coffee or something, Mr. Thongden?"

"Would tea be possible?"

"Certainly." I put the kettle on. "I gather your coming here has something to do with--Superman?"

"Your version of him especially, as I already explained."

"Because I spoke of him as a real person?"

"Because in thinking of him so, you made him real. Your own words."

"Not exactly," I said, wondering again whether I should have let him in.

The water was beginning to boil. "Would you like something in your tea?"

"No one seems to like it here. But in Tibet, tea is almost always taken with butter. Yak butter, of course."

"Of course," I mumbled as though I remembered that everyone knew that. Then suddenly it struck me. "You're from Tibet? But of course. Thongden is a Tibetan name, isn't it?"

I dropped a tea bag it into a large cup. "Anyway, we don't use butter. Saturated fat, you know? Will you take margarine instead?"

I poured the boiling water and placed the cup before him. "Tibet and where else?"

"It is not that simple, Mr. Schwartz. As with Superman, you can say that he is from the planet Krypton. But the Superman you describe as controlling you--he is not from Krypton."

"He is from you--from your imagination."

"I see. Actually, I didn't create Superman; Jerry Siegel and Joe Shuster did."

"No--no. They created the cartoon character. You created your personal living Superman."

I sat down and stared at him. "There's something I'm missing here."

"Of course," he said. "You didn't really, fully create Superman. But--you came close. And then you went on a long detour. But I am the one to put you back again on your path." He waggled a long finger at me. "As for myself, as you can see, I have been completely and thoroughly created."

I shook my head. "I'm afraid I don't see. I don't understand what you're getting at, Mr. Thongden."

"Why, simply that I'm real. You can touch me. You can have me as your guest, drinking tea with you at your table. And how that came to be is one of the things I'm here to discuss with you."

For the first time I began to have a premonition of where he was leading me. I didn't yet understand it. But I knew somehow that he wasn't crazy and that I was on the verge of confronting something truly confounding. 'Then please discuss it, Mr. Thongden. How are you different from anyone else who might be visiting me over tea?"

"It is not easy to explain," Thongden confessed. "In Tibet, before the Chinese invasion, there would have been no problem. But here in the West, such things are not known, let alone believed in. Yet there are many like me, and have been many in the past, who have lived among you."

"Do you know what a tulpa is?"

"A--what?" "A t-u-l-p-a." He spelled it out so slowly and carefully that his long upper teeth showed behind his controlled lip movements. "A living human created by pure thought."
Alvin Schwartz

Alvin Schwartz (1916-2011) wrote Superman and Batman strips as well as many other DC comic-book titles during the 1940s and '50s. In 2006 he received the Bill Finger Award for Excellence in Comic Book Writing. He was the author of An Unlikely Prophet and The Blowtop, which was described by the New York Times as the first conscious existentialist novel in America. He also wrote a number of screenplays and some 30 docudramas for the National Film Board of Canada.

”. . . a unique meditation on time and space, personal identity, and the creative instinct.”

”The finely crafted narrative will hold readers' attention, and the speculations in this 'spiritual autobiography' (as Schwartz calls it) will give even skeptics plenty of food for thought.”

“If you like comic books, especially Superman, and have an interest in Eastern spirituality, An Unlikely Prophet is the perfect book for you.”

“An Unlikely Prophet is an essential text for anyone interested in the history of American comics, the principles behind fiction, and many of the themes Alan Moore has been exploring of late. Consider it ‘Kavalier & Clay’ meets the Superboy from Earth Prime.”

". . . a vast spiritual landscape with translucent forms from the past and future merging into physical form.”

“Schwartz weaves a tale that lingers with you long after the read concludes. Symbolism, masked in the 'ordinary' details of Schwartz's life, is potently and subtly utilized.”

"A rare and mystifying must-read, this book redefines the constructs of reality, imagination, and life itself."

A Metaphysical Memoir by the Legendary Writer of Superman and Batman

By Alvin Schwartz
LIST PRICE $16.95
PRICE MAY VARY BY RETAILER