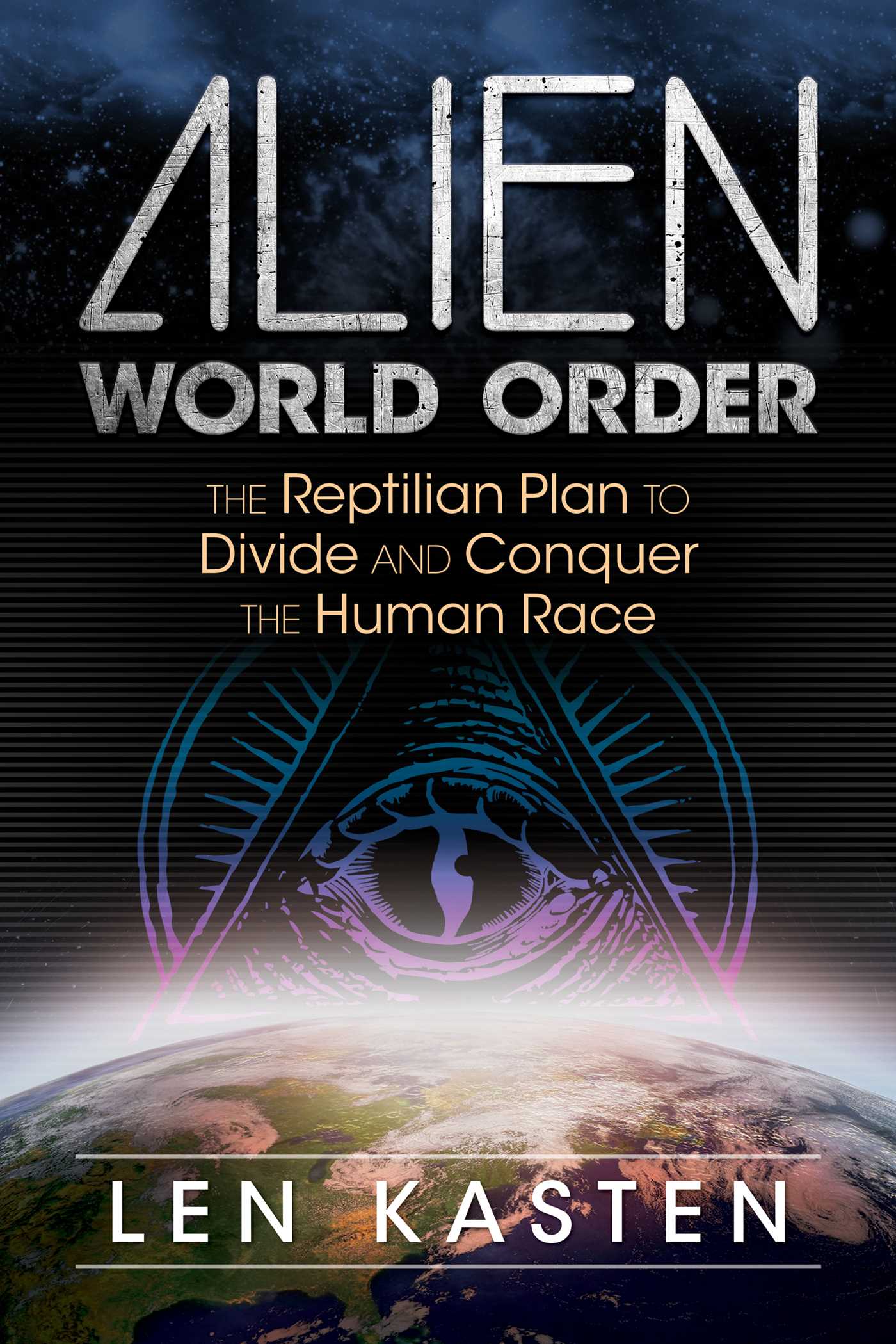 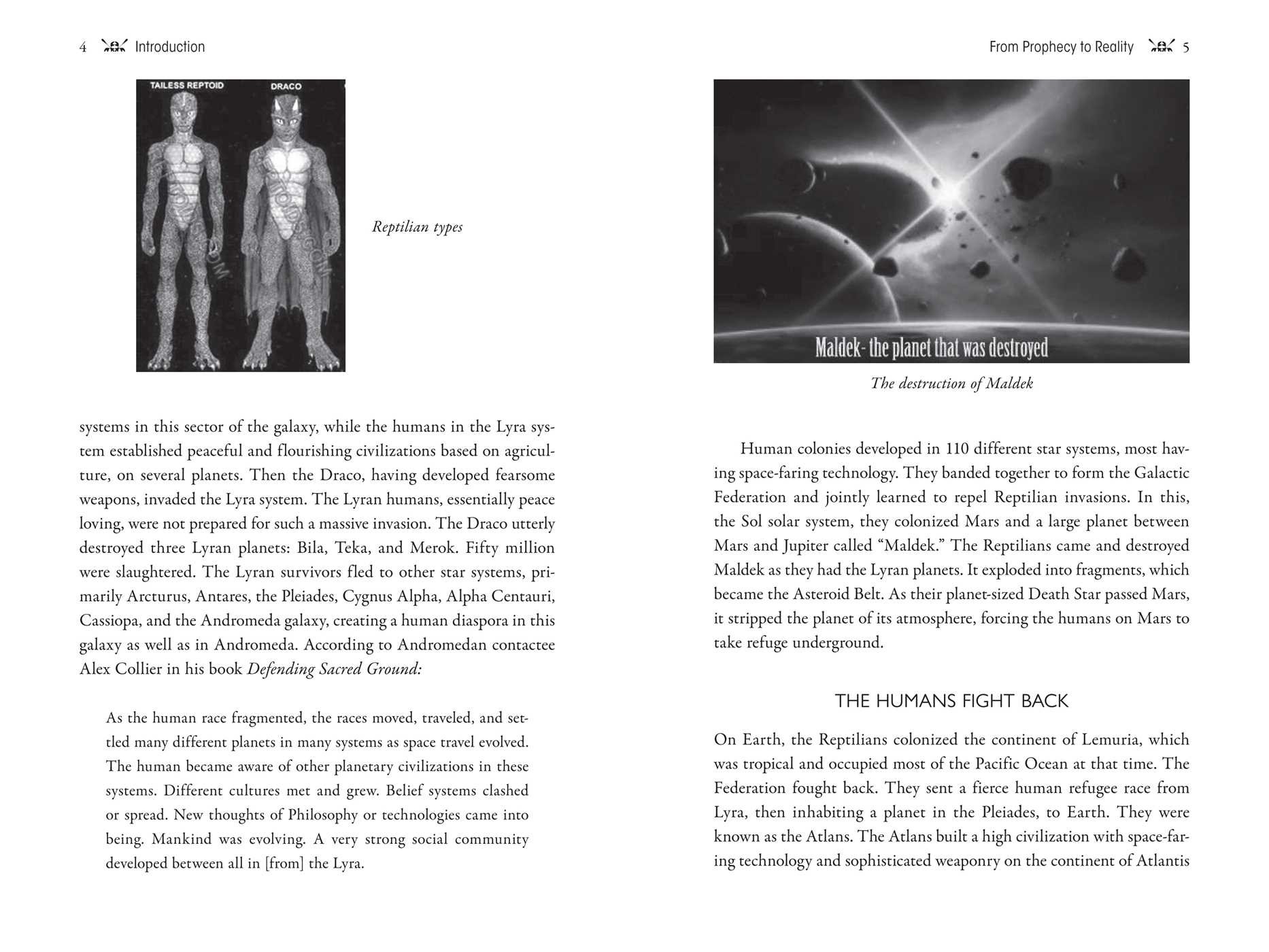 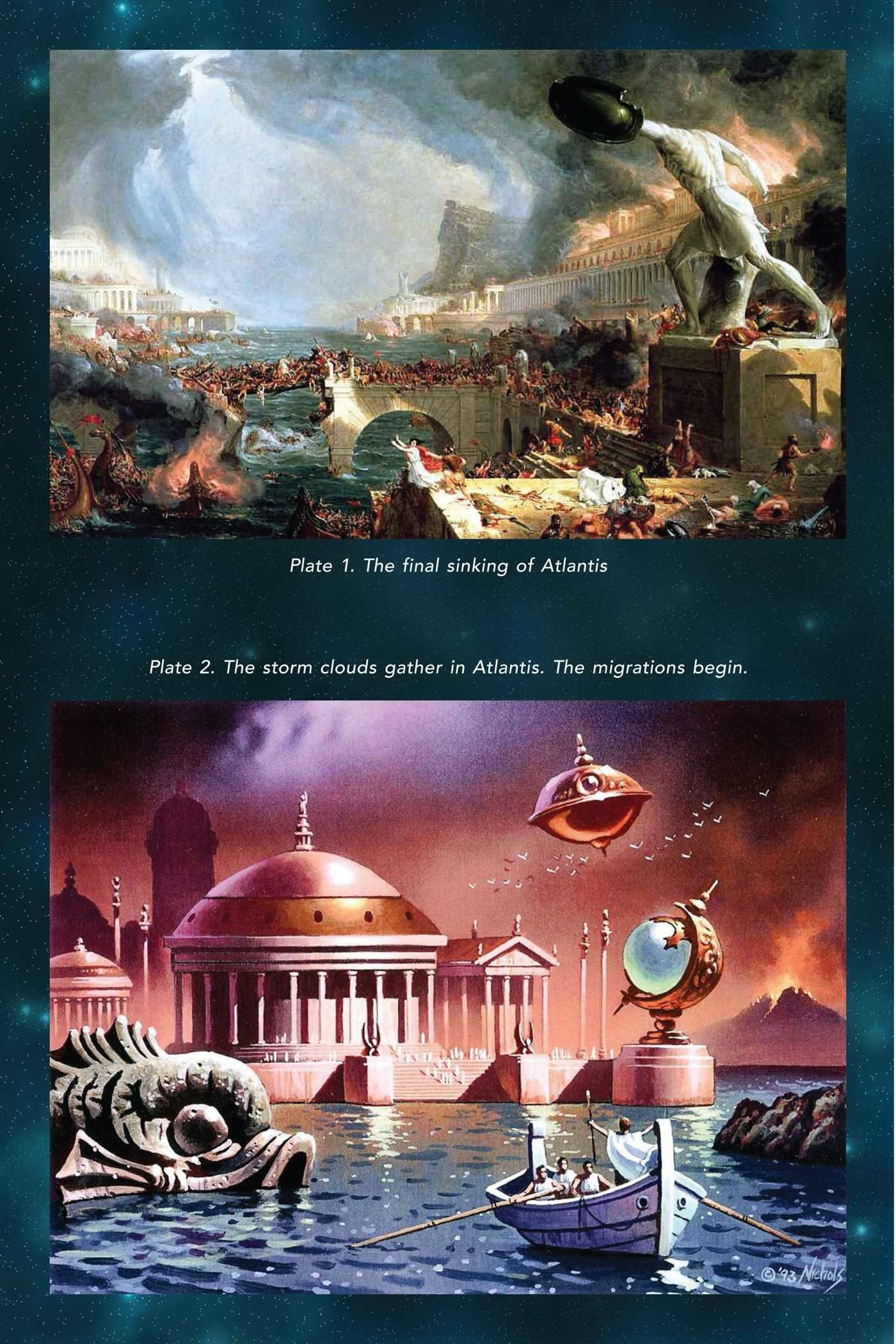 • Shows how Eisenhower’s treaty with the Greys, signed at Holloman Air Force Base in 1954, gave the aliens authority to abduct humans for "research"

Long ago, the Galactic Federation sent the Atlans, a fierce group of humans from the Pleiades, to Earth to confront the newest colony of the combative ever-spreading alien race known as the Reptilians. The ensuing battle sank the continent of Lemuria and drove the Reptilians underground beneath the Indian subcontinent as well as to Antarctica. Able to shapeshift to appear human, the Reptilians then infiltrated the Atlantean civilization, abducting humans and creating Reptilian hybrids. As Len Kasten shows, this technique of infiltration and hybridization prior to an all-out attack has been the hallmark of Reptilian conquest throughout the galaxy.

Chronicling the history of the Reptilian Empire’s influence on Earth and their conquest of 21 star systems, Kasten reveals how the human race is enmeshed in a skillfully concealed plot to enslave humanity and exploit our planet’s physical and biological resources. Revealing Hitler’s pact with extraterrestrials and the Reptilian influence on the Nazi state, he shares new documents that disclose the rescue and rehabilitation of Nazi war criminals to assist in the Cold War, which then corrupted many U.S. government institutions. Focusing on crucial events in the decade after World War II, he examines the Reptilians’ human allies, the Illuminati, who control the levers of financial, technological, and military power throughout the world through various secret societies. He shows how Eisenhower’s treaty with the Greys, signed at Holloman Air Force Base in 1954, gave the aliens permission to take humans up to their spaceships, ostensibly for genetic study--in return for alien technology--and how these abductions led to the creation of a hybrid race under Reptilian mind control. He also explains how Kennedy was assassinated by the CIA because of his plans to rout out this Nazi–Reptilian presence.

Contrasting the Reptilians with the benevolent Ebens, the aliens from Zeta Reticuli who crashed at Roswell, Kasten exposes the stealthy tactics of the Reptilians, their relationship with the Greys, and their advanced genetic bio-technology and teleportation abilities--as well as what we need to do to defeat their plans.

From Prophecy to Reality

It has now been well established that the extraterrestrials inclusively referred to as the “Reptilians,” or alternately the “Reptiloids,” have been living here on earth for thousands of years, and that they consider the Earth to be their ancestral home, since they claim that they were the original occupants in prehistoric times. They were contemporaneous with the dinosaurs, who were also reptilian-based creatures, which means that they supposedly lived on the surface of Earth between 200 million and 65 million years ago, at which time the dinosaurs became extinct. That period, known as the Jurassic Age, is based on carbon dating, which is notoriously unreliable. There is contrary evidence that the age of the dinosaurs may have been no more than one million years ago. We do know that the Reptilians preceded the appearance of the human race on this planet. It is believed that they came here from planets in the Draco star system. Draco is approximately 300 light-years from our solar system.

The humans in this galaxy were predominantly concentrated in the Lyra star system. The Draco and their allies in Orion and Rigel attacked and enslaved the inhabitants of planets in twenty-one star systems in this sector of the galaxy, while the humans in the Lyra system established peaceful and flourishing civilizations based on agriculture, on several planets. Then the Draco, having developed fearsome weapons, invaded the Lyra system. The Lyran humans, essentially peace loving, were not prepared for such a massive invasion. The Draco utterly destroyed three Lyran planets: Bila, Teka, and Merok. Fifty million were slaughtered. The Lyran survivors fled to other star systems, primarily Arcturus, Antares, the Pleiades, Cygnus Alpha, Alpha Centauri, Cassiopa, and the Andromeda galaxy, creating a human diaspora in this galaxy as well as in Andromeda. According to Andromedan contactee Alex Collier in his book Defending Sacred Ground:

As the human race fragmented, the races moved, traveled, and settled many different planets in many systems as space travel evolved. The human became aware of other planetary civilizations in these systems. Different cultures met and grew. Belief systems clashed or spread. New thoughts of Philosophy or technologies came into being. Mankind was evolving. A very strong social community developed between all in [from] the Lyra.

Human colonies developed in 110 different star systems, most having space-faring technology. They banded together to form the Galactic Federation and jointly learned to repel Reptilian invasions. In this, the Sol solar system, they colonized Mars and a large planet between Mars and Jupiter called “Maldek.” The Reptilians came and destroyed Maldek as they had the Lyran planets. It exploded into fragments, which became the Asteroid Belt. As their planet-sized Death Star passed Mars, it stripped the planet of its atmosphere, forcing the humans on Mars to take refuge underground.

The Humans Fight Back

On Earth, the Reptilians colonized the continent of Lemuria, which was tropical and occupied most of the Pacific Ocean at that time. The Federation fought back. They sent a fierce human refugee race from Lyra, then inhabiting a planet in the Pleiades, to Earth. They were known as the Atlans. The Atlans built a high civilization with space-faring technology and sophisticated weaponry on the continent of Atlantis in the mid-Atlantic. They bombarded Lemuria with electromagnetic pulse weapons, and the entire continent sank beneath the Pacific Ocean. The Reptilians retreated underground. They took over a massive underground multi-level cave and tunnel system beneath the Indian subcontinent stretching from central Tibet, near Lake Manasarovar, to northeast India, near what ultimately became Benares and then Varanasi on the banks of the Ganges. There they established their underground capital city of Bhogovita. This civilization was referred to as “Patala” or “Snakeworld” by the surface natives. It became known as the home of the “Nagas” or “serpent people.” Another group of Reptilians remained under Antarctica, which then had a moderate climate.

The Reptilians learned how to shapeshift to appear human, and they infiltrated the Atlantean civilization of prehistoric humans who were blonde-haired and blue-eyed. They abducted humans and created Reptilian hybrids. This technique of infiltration and hybridization of another civilization prior to an all-out attack has been the hallmark of Reptilian conquest right up to the present day. The infiltrators slowly get control of the levers of power in the targeted population, and the enemy becomes weakened from within. It was used very effectively by their protégés, the Nazis, prior to World War II when it was called “the Fifth Column,” and Fifth Columnists were sent to Europe and America in the mid-thirties. This term was coined in 1937 by Spanish dictator Francisco Franco, who claimed he would attack with four columns. The fifth column had already infiltrated the enemy ranks. As will be seen later, this same time-tested Reptilian technique is being implemented in America today. The Atlanteans discovered the deception and began pointing their weapons downward. Ultimately, this caused Atlantis to sink beneath the Atlantic, one segment at a time.

Then, the Reptilians unleashed an experimental “super weapon,” which caused the poles to shift. A Reptilian woman called Lacerta, interviewed on YouTube, says that this was some sort of “fusion bomb.” The final part of Atlantis sank in one night. Antarctica became a frozen wasteland, and the Gobi turned into a desert. This was probably the event that wiped out the dinosaurs. The Atlanteans had been given adequate notice by their prophets and had migrated to Egypt, the Mediterranean, and Central and South America. Psychic Edgar Cayce called this the migration of “The Children of the Law of One.”
Len Kasten

Len Kasten is a UFO researcher and freelance writer. He intensively studied the Edgar Cayce Readings at the A.R.E. in Virginia Beach and has been a lifelong devotee of astrology and theosophy. He is a former member of the National Investigations Committee on Aerial Phenomena (NICAP) and the Mutual UFO Network (MUFON), and he is the president of the American Philosopher Society. He has been a feature writer, with more than 50 published articles, for Atlantis Rising magazine. He lives in Casa Grande, Arizona.

“In Alien World Order, Len Kasten provides a coherent account of the history and imperialistic activities of Reptilian extraterrestrials on Earth and the Milky Way galaxy over millennia, using the work of Robert Morning Sky, Stuart Swerdlow, Alex Collier, and other primary sources. The scope of Reptilian influence over human elites and society is breathtaking and provides an explanation for many of the historical ills afflicting humanity. Kasten peels back the layers of secrecy even further to reveal the dire situation we collectively face today--where our political leaders are vassals for imperialistic Reptilian aliens--and the need for an informed citizenry to take back their sovereign destiny.”

“Veteran UFO researcher Len Kasten has built a terrifying scenario of his findings about the aliens’ historical background and their future intent to control Earth. Along with different alien types, Kasten’s book focuses on the often reported reptilian-like beings and their nefarious plans. This book should be read by all those concerned with putting the pieces of the alien puzzle together.”

“Len Kasten’s Alien World Order makes a compelling, well-documented case for the historical and ongoing competition between the Reptilian Draco Empire, with its program of hate, and the Galactic Federation, with its program of love. I urge you to read this book; the more of us who do, the more likely we’ll prevail against the Dracos and, with help from the Galactics, lift Earth to a planet of peace, cooperation, and encouragement for all.”

“Len Kasten has courageously pieced together a lost history that goes far beyond our current understanding of who we are and where we come from. He has mapped out a new cosmology that takes us back to the stars, revealing the hidden stories of our galactic history, which include the cast, characters, and politics involved. The information within these pages allows us to take a giant leap forward to a deeper knowing that has always been encoded within our DNA. This hidden history has been patiently waiting to be revealed when we are ready to face the deep spiritual and psychological questions that arise from this knowing. Are you ready?”

“As always, Len Kasten writes in an articulate, thoughtful, and compelling manner. Alien World Order presents a profound and cohesive ‘look behind the scenes’ at the massive, sinister alien agenda that is interwoven with planet Earth’s long history. I highly recommend Len’s new book!”

“Len Kasten has his hand on the pulse of historical truth regarding the most denied reality on planet Earth today.”

– Carrie L’Esperance, author of Soul Breathing: Spiritual Light and the Art of Self-Mastery

“A psychedelic overview of the alien agenda. From ancient aliens to the New World Order and secret space programs--it’s all here in a rip-roaring read.”