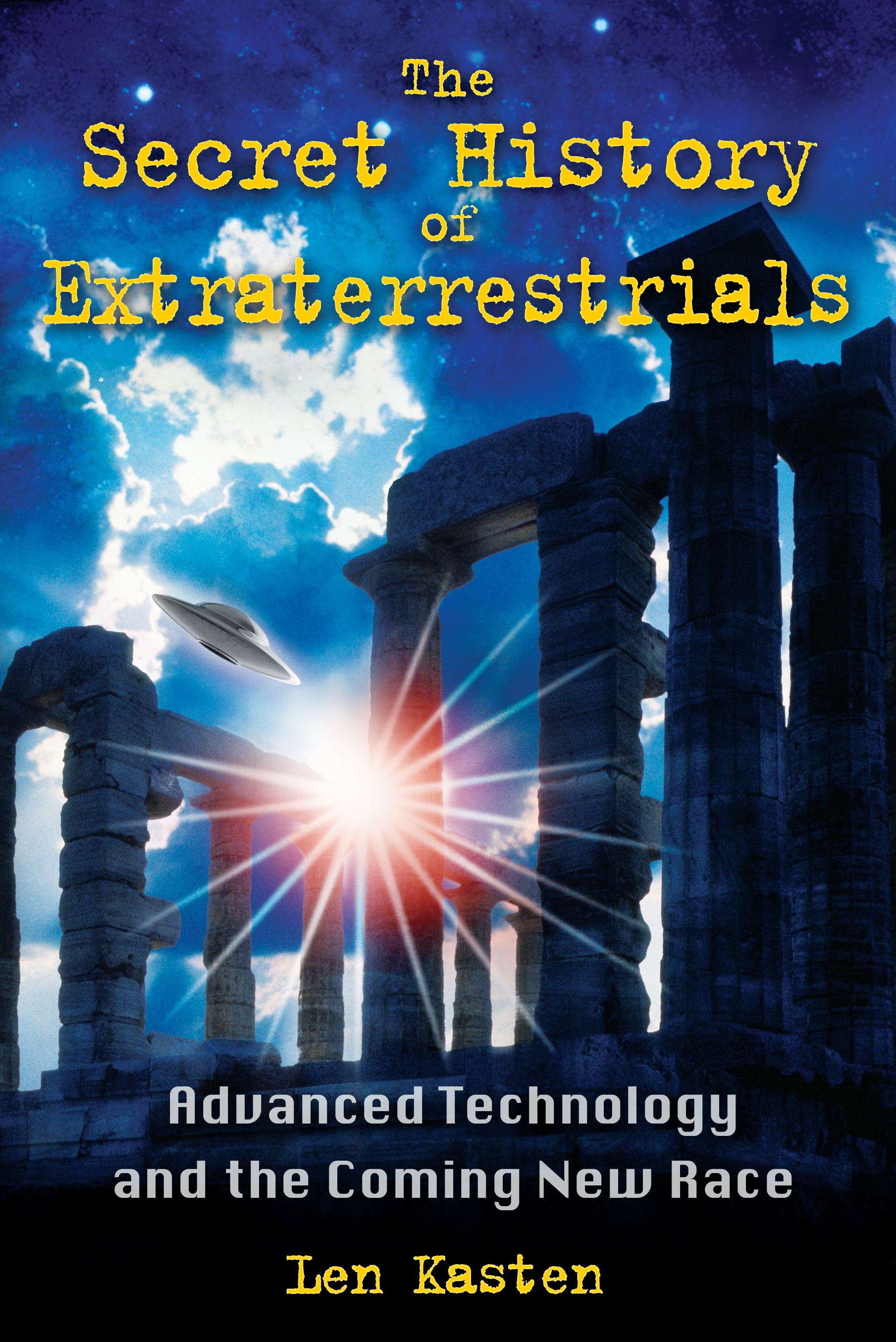 Explores the role of ETs in the military, government, technology, history, and the coming new age

• Surveys contact with ETs, abductions, alien technology and exopolitics, genetic tampering by ETs, and the history behind the Nazis and UFOs

The extraterrestrial presence on Earth is widening and, as we enter the Aquarian Age, will be admitted officially, causing shock and an urgent universal need to understand the social and technological changes derived from our space brothers. A primer for the explosive advances humanity will experience scientifically and spiritually in the coming years, this compendium explores the ET phenomenon and its influence on humanity past and present.

The book surveys contact with ETs and abduction accounts, unexplained public and undisclosed military technology from aliens including anti-gravity devices, exopolitics (the influence of ETs in human affairs), the Iraqi Stargate, the Hybrid Project of alien interbreeding by abduction, Nazi ties to UFOS and their secret underground base in Antarctica, government cover-ups of alien interactions including Roswell, and the transformation triggered by the Hale-Bopp comet. Based on interviews with people who are witnessing the coming changes as well as those visionaries who are actually bringing them about--including John Mack, Major Jesse Marcel, Paul LaViolette, Robert Bauval, Michael Salla, and Helen Wambach--this book sketches out a breathtaking vision of the planetary revolution just around the corner.

Writer David E. Flynn, author of Cydonia: The Secret Chronicles of Mars, has analyzed the circumstances surrounding the timing and placement of the Roswell crash. The results of his research give us an amazing glimpse into the mechanics of synchronicity and destiny.

Flynn believes that all human knowledge derives from higher sources, slowly advancing the spiritual condition of humanity toward perfection. This knowledge, he claims, comes from “the gods,” who are really extraterrestrials, and is given to the human race through synchronous events that occur on a precise timetable throughout history. The timetable is geared to cycles over immense periods of time that we cannot discern easily because our history is so limited in scope. One such event was the first descent of the “Sons of God” to Mt. Hermon in ancient Phoenicia. Here, they bred with human females, the so-called daughters of Adam, and produced a hybrid race. These were the infamous Nephilim, literally “the fallen ones,” who were supposedly of gigantic stature. Of this Flynn says, “Through the influence of these heavenly beings and their offspring, men became gifted with knowledge surpassing any that had yet existed.” There have been many myths about this. In the Bible, it was “eating the apple from the Tree of Knowledge.” In Greek mythology, it was Prometheus bringing fire to mankind. Lucifer means “light bringer,” and is another name for Prometheus.

Mt. Hermon in ancient Phoenicia, the point of the first descent of the gods to earth, lies precisely at 33.33 degrees north of the equator, and 33.33 degrees east of the prime meridian (the longitude of Paris). This focus on the number 33 by the gods invested this number with occult significance, and it became a sacred number to the Freemasons. The Masons understand that the power of numbers and symbols is derived from the ancient wisdom. To indicate that the power of 33 derives from geographical coordinates, the Masons have incorporated the two most important symbols of navigation into their logo, the square and the compass. This is to say that the arts of earthly navigation are a metaphor for the attainment of spiritual understanding. Flynn says, “The most powerful secret held by the occult elite is related to this concept taken to a higher level.” Or, in reversal of the words of the famous Hermetic axiom, “As below, so above.”

Flynn tells us that another important number was derived from the Mt. Hermon location--33.33 degrees of the great circle represents 2,012.9 nautical miles. Of this connection, Flynn asks the question, “Does the chosen location of the first connection of heaven with the earth on Mt. Hermon . . . set in time the final phase of a new world order in 2012?” Interestingly enough, 2,012.9 translates to December of 2012 when counted in the precessional calendar beginning in March, the exact date of the end of the Fourth World according to the Mayans.

The significance and the synchronicity of the Roswell crash becomes startlingly clear when all of the numbers involved in the location of the crash site, and the date of the crash, are considered. The impact area about 40 miles northwest of Roswell, New Mexico, is at 33 degrees north latitude. This places it at a distance of 2,012 nautical miles from the equator. When the latitude is multiplied by the universal mathematical constant Pi, the result is 104 degrees. This is the precise longitude of the crash site. The multiplication by Pi is understandable, since it is one of the most important numbers in architecture and navigation. Flynn says, “The only place on earth where 33 degrees latitude and 104 degrees longitude exist without lying in an ocean, as it does south of the equator, or an uninhabited mountain plateau as it does in the Eastern Hemisphere, is a few miles northwest of Roswell, New Mexico, USA.” He says further, “The odds against a crash location occurring ‘by chance’ precisely at the coordinates that are the product of Pi x 33 are astronomical.”

The earth is 21,600 nautical miles in circumference. When this number is divided by 33.33, the result is 648.06480648, a variation of 6,480, or one quarter of a precessional cycle. When this number in turn is divided by 19.47, a variation of the year of the crash, that is, 1947, it produces 33.28, a very close modification of the latitude of the site. Interestingly, there are 64.8 years between July 1947 and March 2012. Furthermore, Flynn says it is no accident that the crash occurred on the anniversary of American independence, July 4, since the event had much to do with the ordained destiny of the United States. As Colonel Corso has shown, the crashed disc was the source of technical innovations that allowed the United States to develop technological parity with the aliens.

Flynn believes that Roswell was also a marker event to begin the countdown to 2012, which fact would not be comprehended until the twenty-first century. Because it has been viewed as an accident for all these years, researchers have been diverted from the mathematical message until now when the year 2012 has taken on enormous significance. This convinces Flynn that the perpetrators of the crash were connected with the original Sons of God who landed on Mt. Hermon and first imprinted 2012 on the universal subconscious. This casts the sacrificial dead aliens in the role of “messengers,” which is the precise term the ancients used for heavenly beings. And, once more, the advent of the “messengers” heralded a new era of the interbreeding of aliens with humans, and the creation of a hybrid race.

And so Roswell must now take its rightful place in the pageant of American history along with the signing of the Declaration of Independence, Washington crossing the Delaware, the Civil War, and our victory in World War II, as the event that prepared us, and the rest of the world, for galactic membership.
Len Kasten

Len Kasten is a UFO researcher and freelance writer. He intensively studied the Edgar Cayce Readings at the A.R.E. in Virginia Beach and has been a lifelong devotee of astrology and theosophy. He is a former member of the National Investigations Committee on Aerial Phenomena (NICAP) and the Mutual UFO Network (MUFON), and he is the president of the American Philosopher Society. He has been a feature writer, with more than 50 published articles, for Atlantis Rising magazine. He lives in Casa Grande, Arizona.

“Len Kasten’s The Secret History of Extraterrestrials provides an indispensable key to unlocking the hidden history of the extraterrestrial presence on our planet. The scope and implications of Kasten’s book are breathtaking, not because of some sleight of hand by an ambitious author, but because of the greater reality he unveils of extraterrestrials historically interacting with humanity.”

“With our present knowledge of the cosmos, there is now a real possibility of evolved and intelligent civilizations elsewhere in the vast cosmological space. And possible visitations and even encounters can no longer be ignored. Naturally we must tread with caution and not jump to conclusions too easily and too readily; but we must also keep an open mind and respect those bold investigators who apply rigorous research and common sense to this fascinating although very debated hypothesis. Len Kasten is such an investigator, and his book The Secret History of Extraterrestrials is a must for the libraries of all seekers of truth with unbiased minds.”

– Robert Bauval, author of The Orion Mystery, Message of the Sphinx, and Black Genesis

“Len Kasten has provided an up-to-date survey of the vast array of issues that are now emerging into the public consciousness regarding an extraterrestrial presence engaging the human race. For those who want to jump right into the pool and not just sit on the side and dangle their feet, take the plunge with The Secret History of Extraterrestrials.”

“You can always count on Len Kasten to take you on a spellbinding galactic adventure, for he never fails to seek out ideas and theories that challenge your assumptions of what is true while firing your imagination. Whether in this dimension or another, be it past or future, your travels with Len Kasten will open your mind and introduce you to realities and experiences, you may have mistakenly assumed can exist only as fiction.”

– Paul Davids, director/producer of Jesus in India and executive producer/cowriter of Roswell: The UFO

“This comprehensive book covers some of the most intriguing UFO and alien-contact cases ever reported. Len Kasten has done a fine job of drawing together some fascinating material and asks some profound questions about what this means for the human race.”

“. . . Kasten was able to pull together information and compile it in a concise, reader-friendly manner.”

“Even Hollywood would have a hard time screwing up such excitement. As mentioned before, you can approach this book from the “believer” or “non-believer” mindset, and still have a rollicking good time. Len Kasten’s The Secret History of Extraterrestrials is like holding a rabbit hole right in your hands. Go on, dive in!”